Accessibility links
The Astronauts SpaceX Crew Dragon Capsule Are Returning To Earth The two NASA astronauts who flew on the SpaceX craft to the International Space Station in May are scheduled to return to Earth on Sunday. But there's a hurricane forecast for the splashdown vicinity. 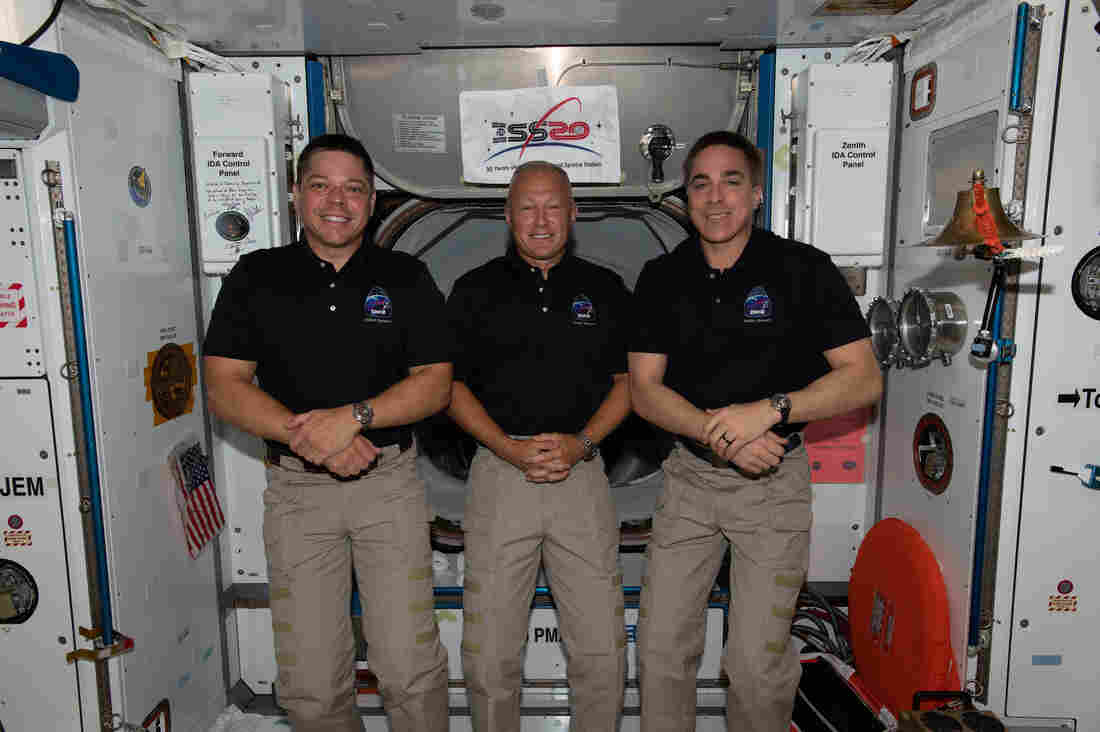 NASA astronauts (from left) Bob Behnken, Doug Hurley and Chris Cassidy are the U.S. members of the Expedition 63 crew aboard the International Space Station. Behnken and Hurley are scheduled to return to Earth on Aug. 2. NASA hide caption 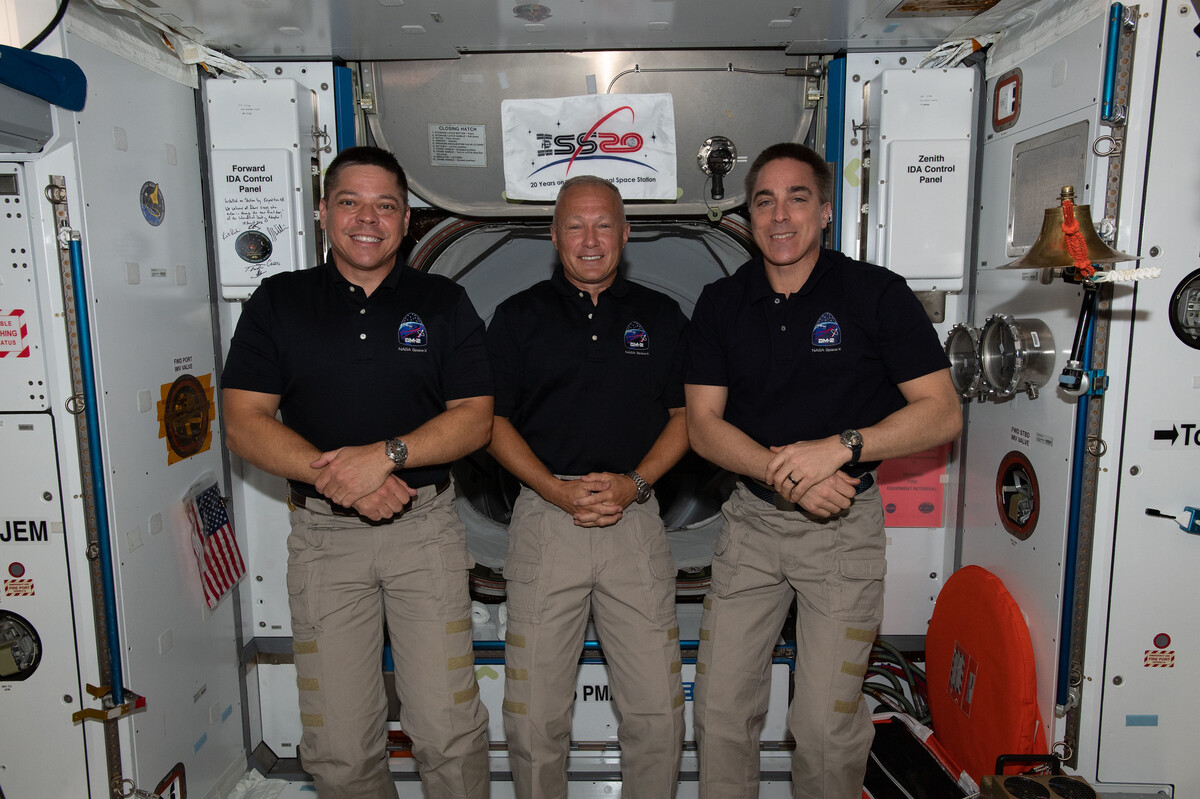 NASA astronauts (from left) Bob Behnken, Doug Hurley and Chris Cassidy are the U.S. members of the Expedition 63 crew aboard the International Space Station. Behnken and Hurley are scheduled to return to Earth on Aug. 2.

The two astronauts that blasted off in the first private space vehicle to take people to the International Space Station are about to return to Earth — by splashing down in the waters around Florida.

This will be the first planned splashdown for space travelers since 1975, although a Russian Soyuz capsule did have to do an emergency lake landing in 1976.

NASA astronaut Douglas Hurley says that he and his crewmate Robert Behnken are prepared for the possibility of seasickness.

"Just like on an airliner, there are bags if you need them. And we'll have those handy," Hurley said in a press conference held on Friday, while on board the station. "And if that needs to happen, it certainly wouldn't be the first time that that's happened in a space vehicle. It will be the first time in this particular vehicle, if we do."

The astronauts will come home in the same SpaceX Dragon capsule that took them up on May 30. Their flight marked the first time people had been launched to orbit from U.S. soil since NASA retired its space shuttles in 2011.

The success of their trip in the SpaceX vehicle has been a major milestone for commercial space travel, and a vindication of NASA's long-term plan to rely on space taxis for routine flights to and from the orbiting outpost — while the government agency focuses on developing vehicles for a return to the moon.

The Dragon "Endeavour" capsule undocked from the International Space Station on Saturday at 7:34 p.m. ET. They will spend the night in orbit before heading home, with the splashdown scheduled for 2:48 p.m. ET on Sunday. NASA administrator Jim Bridenstine confirmed Saturday afternoon that the crew will target a splashdown site off the coast of Pensacola as the primary location. Conditions there are a "Go," according to the space agency.

"We have confidence that the teams on the ground are, of course, watching that much more closely than we are," Behnken said. "And we won't leave the space station without some good landing opportunities in front of us, good splashdown weather in front of us."

An alternative site off the coast of Panama City in the Gulf of Mexico is still being monitored should the crew need to switch locations. While Tropical Storm Isaias is headed for Florida, it is currently expected to hit the state's east coast.

Their mission is technically a demonstration flight — it is the final test for SpaceX's crew system to be certified by NASA as 'operational' for future astronaut missions to and from the space station.

Already, NASA has assigned astronauts to future SpaceX Crew Dragon flights — including Megan McArthur, who happens to be married to Behnken.

"She's super excited to be assigned to a SpaceX mission," says Behnken, who says the thing about his return to Earth that he's looking forward to the most is seeing his wife and son.

"My son is six years old," says Behnken, "and I can tell from the videos that I get, and talking to him on the phone, that he's changed a lot even in just the couple of months that we've been up here."