Accessibility links
NASA Astronauts Carried Safely Home On SpaceX Rocket NASA and SpaceX are welcoming home two astronauts who splashed down safely in the Gulf of Mexico after several months on the International Space Station. 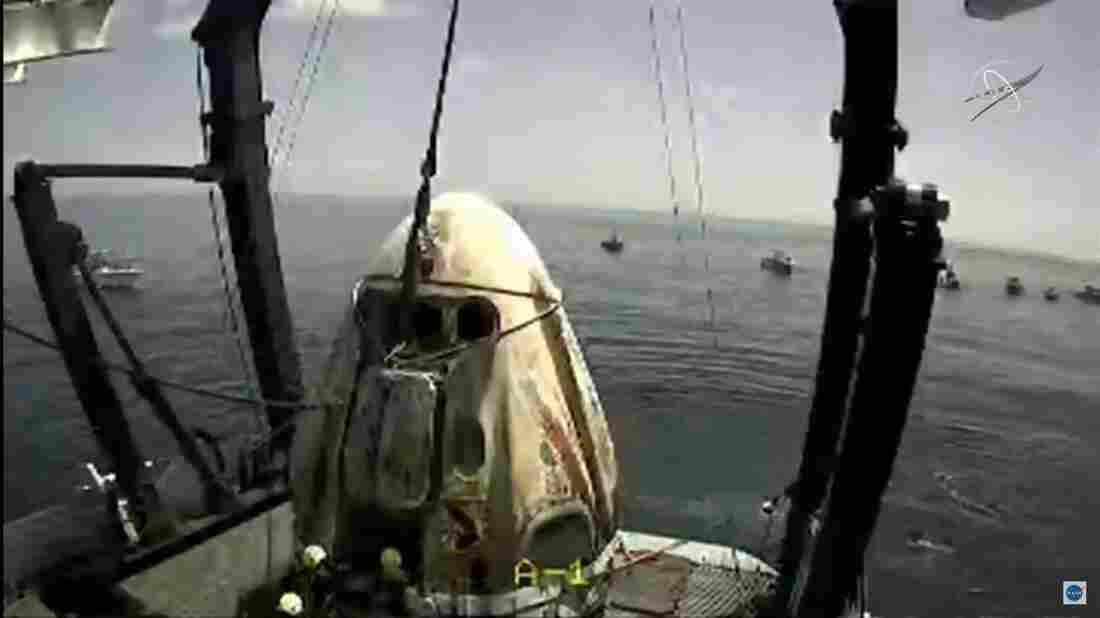 The SpaceX capsule sits aboard a recovery ship in the Gulf of Mexico. NASA/Screenshot by NPR hide caption 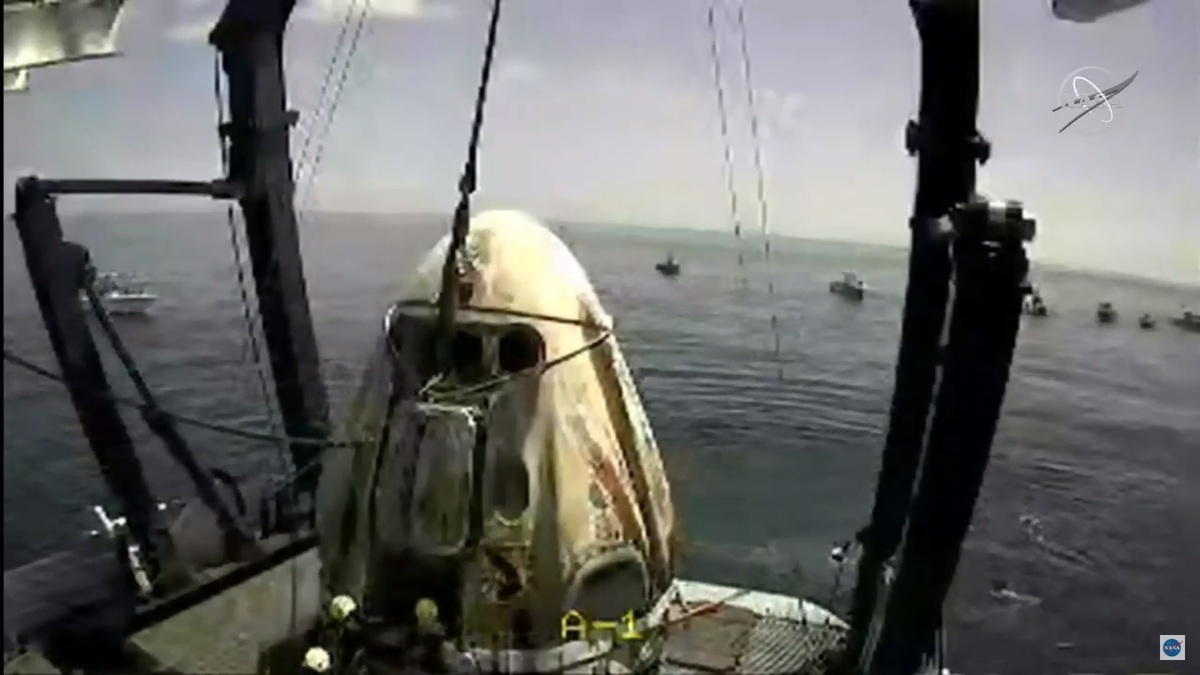 The SpaceX capsule sits aboard a recovery ship in the Gulf of Mexico.

Two NASA astronauts are back on Earth after their space capsule splashed down in the Gulf of Mexico, off the coast of Pensacola, Fla.

The last time any NASA astronauts came home by splashing down was in 1975 — and back then, they were in an Apollo space vehicle. This time, the astronauts were in a white, bell-shaped capsule owned by SpaceX.

The success of their test flight, to the International Space Station and back, is a milestone for SpaceX, the first private company to send people to the outpost.

The company has been taking cargo to and from the station for years. This flight with people on board was the final test for SpaceX's crew system to be certified by NASA as "operational" for future astronaut missions.

That means the U.S. once again has its own ability to put people in orbit and return them safely. Since retiring its space shuttles in 2011, NASA has had to buy seats for its astronauts on Russian spaceships, but NASA can now rely on an American space taxi that takes off from Florida.

"This was a great day for NASA and a great day for the United States of America," said NASA administrator Jim Bridenstine in a post-splashdown press conference. "We are entering a new era of human spaceflight where NASA is no longer the purchaser, owner, and operator of all of the hardware. We are going to be a customer — one customer of many customers in a very robust commercial marketplace for human spaceflight to low Earth orbit."

NASA is already assigning astronauts to future SpaceX missions — including Megan McArthur, who happens to be married to one of the just-returned astronauts, Bob Behnken. In fact, she is expected to ride in the exact same spacecraft next year, as the SpaceX capsules are designed to be reusable to bring down costs.

Behnken and his crewmate Doug Hurley blasted off in their SpaceX Dragon capsule on May 30. Their flight marked the first time people had been launched to orbit from U.S. soil in almost a decade, and they spent two months living and working on board the station.

Then they climbed back into their SpaceX capsule, which they had dubbed "Endeavour," and undocked from the station on Saturday at 7:34 p.m. ET. They spent the night orbiting the Earth, and then a deorbit burn set their capsule on an irreversible course to reenter the atmosphere.

Video beamed down from the capsule showed the pair in their sleek black-and-white suits, monitoring their progress on large blue touch screens.

Meanwhile, at SpaceX headquarters in Hawthorne, Calif., mission controllers wore masks at their workstations, due to COVID-19. SpaceX founder and CEO Elon Musk was there, watching the screens and speaking from time to time with SpaceX president Gwynne Shotwell.

Off the coast of Pensacola, a recovery ship waited. Though Tropical Storm Isaias was headed up the eastern coast of the state, mission managers had judged the weather in the Gulf of Mexico acceptable for the splashdown.

The two astronauts' communications blacked out, as expected, for several nerve-wracking minutes during their fiery reentry. But then they were back in contact, as the first views of their capsule appeared on video. It dropped through the sky at around 400 miles per hour before two parachutes emerged to slow it down.

Then, four white-and-reddish orange parachutes billowed out, slowing it down even more. The two astronauts braced for impact as their capsule, bearing dark scorch marks, hit the calm seas with a big splash. Two fast boats raced toward it, as its parachutes drifted down to the water.

Cheering and clapping could be heard in the background as Mission Control told the astronauts, "welcome back to planet Earth and thanks for flying SpaceX."

Almost immediately, however, private boats full of curious onlookers encroached on the recovery effort, coming close to the floating capsule. That's a problem, as it could distract the workers and also put people at risk from dangerous chemicals.

"That was not what we were anticipating," says Bridenstine, who said the U.S. Coast Guard had done an excellent job of clearing boats from the area for the water landing. "And then of course, after they landed, the boats just came in. We need to do a better job next time for sure. I will tell you it's a beautiful sunny day and a lot of boaters were out there, and they were certainly intrigued."

SpaceX's Shotwell said that the onlookers had to be asked to move back as they got too close. "We'll certainly be better prepared next time," she said, adding that more boats to patrol the area could be needed.

Despite the gawkers, the SpaceX capsule was hauled onto the recovery vessel, and after the astronauts emerged and got a medical checkup, they were taken back to shore by helicopter. Their next stop is Houston, and Shotwell said that Musk was headed there to personally welcome them back.

Going forward, NASA wants to rely on commercial space taxis for routine flights to and from the orbiting outpost — while the government agency focuses on developing vehicles for a return to the moon.

The next SpaceX mission with astronauts on board is scheduled for September, and the four astronauts assigned to that mission were watching this historic homecoming with great interest.

"We were together in the control center here in Houston watching the splashdown," says astronaut Shannon Walker, who said it was an emotional event to watch their colleagues come home safely and to see the spacecraft operate so well. "We're very excited that it went as smoothly as it did."

Besides NASA astronauts, SpaceX has plans to take other paying customers to space, including on a trip around the moon and back.

"The capsule worked beautifully. The operations worked extremely well. So we certainly feel comfortable that we're on the right path to carry commercial passengers not too long from now," said Shotwell. "Based on the results so far, I'm very comfortable."