Accessibility links
Climate Science Moves Online Scientists from around the world are writing the next major United Nations climate report. Summarizing the state of the atmosphere without meeting in person is as hard as it sounds. 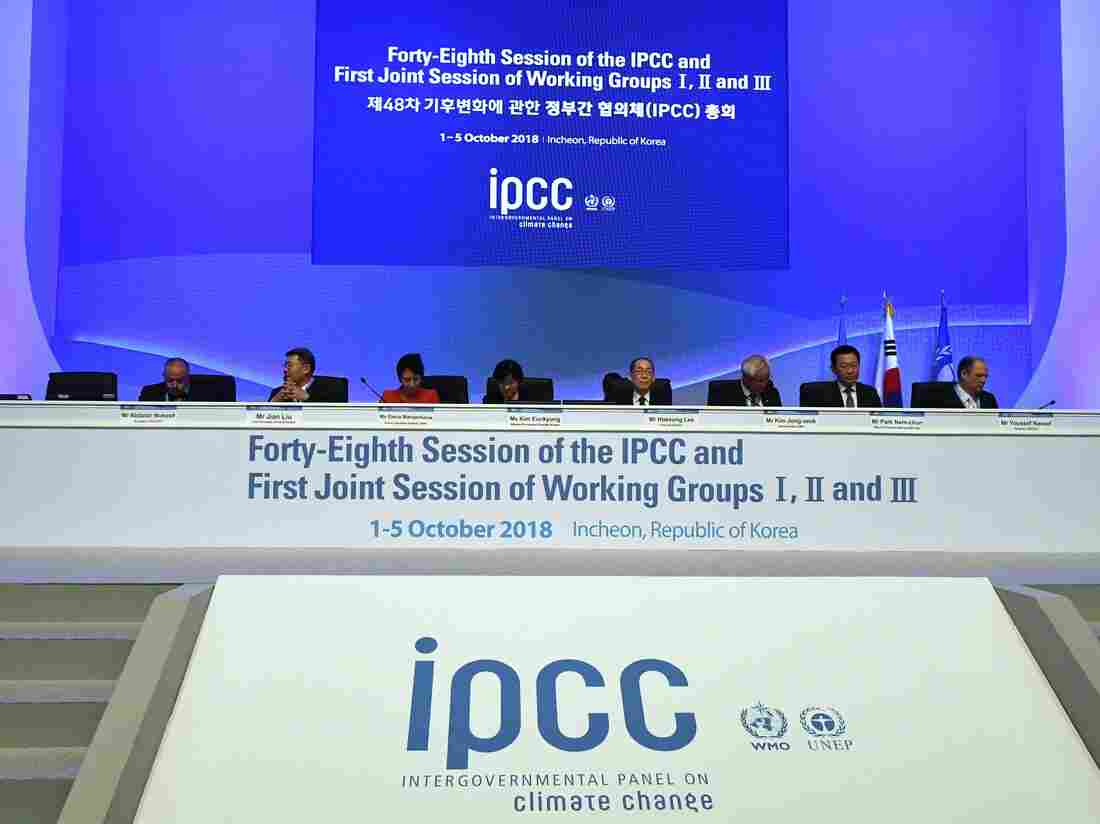 The United Nations Intergovernmental Panel on Climate Change met in Incheon, South Korea, in October 2018. The pandemic has forced scientists around the world to write the latest U.N. climate report without meeting in person. Jung Yeon-Je /AFP via Getty Images hide caption 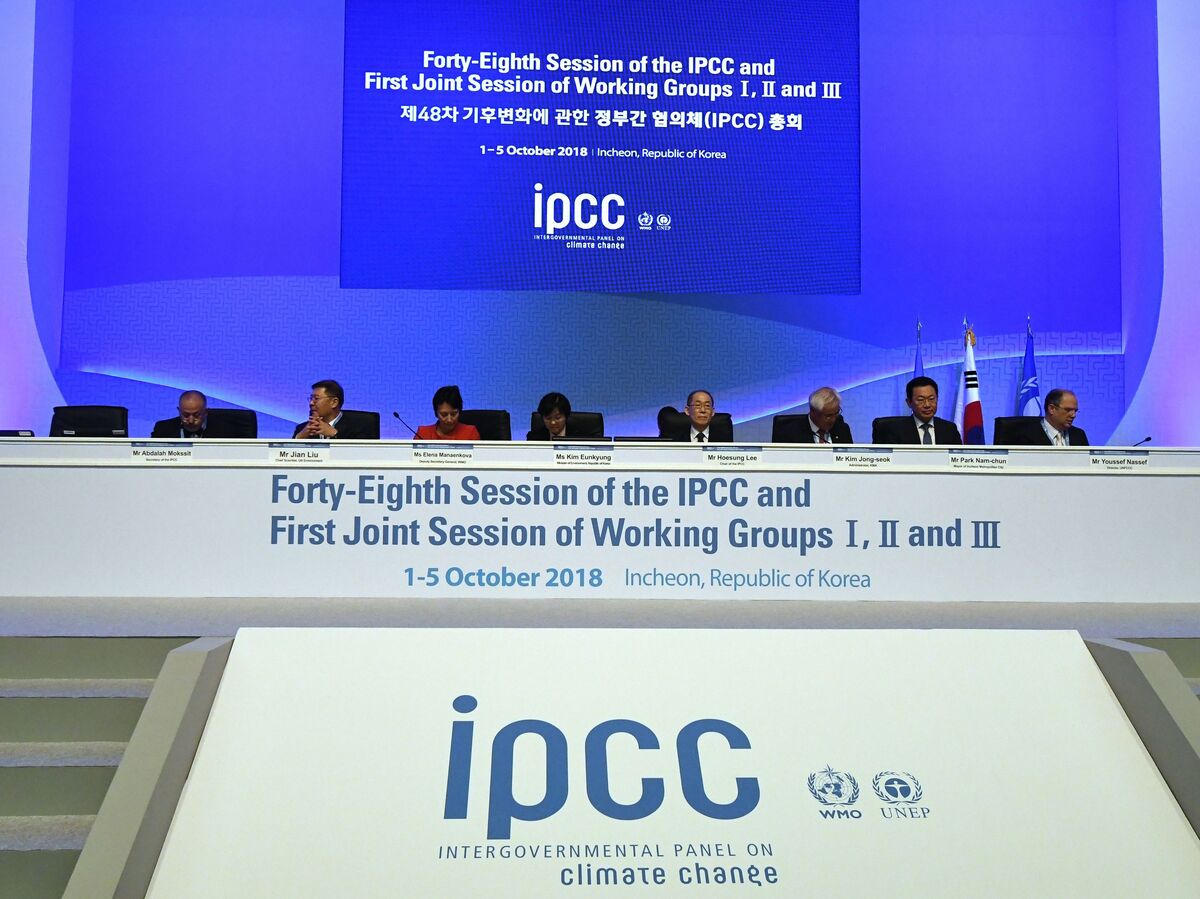 The United Nations Intergovernmental Panel on Climate Change met in Incheon, South Korea, in October 2018. The pandemic has forced scientists around the world to write the latest U.N. climate report without meeting in person.

In mid-April, hundreds of scientists from around the world were supposed to fly to Ecuador for a five-day meeting about the latest research on reducing greenhouse gas emissions and removing carbon dioxide from the atmosphere.

It was an important event. The scientists are writing part of a crucial global climate science report scheduled for release next year by the Intergovernmental Panel on Climate Change, the part of the United Nations that assesses global climate science. National governments rely on the multi-chapter report to anchor international climate negotiations and to set greenhouse gas emissions targets.

It was an inadvertent test of a question that has loomed over international climate science for years: Can climate experts support the United Nations effectively without requiring scientists to fly all over the world for meetings?

For decades, many scientists have worried that their emissions-intensive air travel might send the wrong message about global warming. But in-person meetings persisted, in part because they gave the appearance of a level playing field, where scientists from around the world had the opportunity to weigh in. That's important because experts from richer and larger countries have historically dominated international climate science, drowning out the perspectives of scientists from smaller and poorer countries that are often on the front lines of global warming.

"For years we have faced a number of challenges in making our physical meetings more participatory and inclusive," Valérie Masson-Delmotte, co-chair of the IPCC working group that analyzes the physical science of climate change, told the scientific journal Nature before April's remote meeting. "Now we need to work to make online meetings as inclusive and as participatory as possible."

Indeed, the virtual meeting appears to have been more inclusive in some ways. Organizers say more than 280 people attended at least part of the April meeting. That's significantly more than the first two meetings of the same author group that occurred before the pandemic began. They were held in the United Kingdom and India and attracted 206 and 221 participants respectively.

And, according to the IPCC, the additional participants appear to come from the same wide range of locations and backgrounds that previous meetings attracted.

The virtual meeting also saved 368 tonnes of CO2 emissions because participants didn't travel, according to the organizers' estimates. That's equivalent to the emissions from driving an average passenger car almost 1 million miles. And initial worries about Internet connectivity largely didn't pan out at the April meeting. Most scientists living in places with unreliable Internet access nonetheless managed to participate, according to attendees, although poor Internet has delayed or stymied work on other portions of the larger report.

Making the April meeting virtual did present some serious challenges. One of the thorniest was figuring out what time of day to schedule large group discussions. The scientists and other experts involved in writing the report are spread out over 23 time zones, which meant there were only two hours each day when everyone could participate without being awake between midnight and 6 a.m. local time.

The time zone issues forced the meeting to take place over two extra days and, even with the additional time, the scientific goals were scaled back.

It's unclear how that will affect the release date for the final report. Finishing it on time, so governments can use it as they enter the next round of climate negotiations, may ultimately hinge on how the authors adapt to remote work.

Alaa Al Khourdajie is a senior scientist for the IPCC. A big part of his job during the meeting was to make sure that all the participants had the data they needed. Often, that required fielding questions, mostly via online chat, from multiple people who were looking for similar answers. If everyone was in the same room, and the same time zone, Al Khourdajie could answer the questions all at once and help facilitate a discussion between the people asking them.

"But working with so many authors from different time zones, these questions were coming at different times," he says. He used an online discussion platform to connect authors with similar questions, but it still seemed inefficient. "You know, if 30 of us went to a breakout room and sat down together for one hour, we would probably nail things much, much faster."

Going virtual was also harder for some participants than others. Almost a third of the participants said they weren't able to fully participate, including 36% of those from developing countries, according to a survey conducted by the IPCC. That's compared to just 25% of participants from developed countries.

One problem, especially for female scientists, was competing familial responsibilities and work commitments. Leaving home for meetings is inconvenient, but it separates participants from day-to-day child care and other domestic responsibilities that already fall disproportionately to women.

"Many of us really struggle to work from home," says Lisa Schipper, an environmental social scientist at the University of Oxford and coordinating author of a report chapter about climate resilient development options. She says that on one hand, she's glad that being interrupted by children during work calls has become more normal during the pandemic. "Having this opportunity to kind of feel a bit more relaxed about these interruptions is good. But it's, of course, extremely distracting too, because you can't listen to what people are saying."

Schipper worries that remote meetings will make it more difficult for women to exert their influence and apply their expertise to the IPCC's final report.

That's particularly concerning because the IPCC has excluded women, especially women from outside Europe and North America, for decades. A 2018 study found that only one quarter of the executive leaders for the latest IPCC report are women. Many female scientists told that study's authors that child care and housework responsibilities were their biggest obstacle to fully participating in IPCC work.

One unexpected benefit of holding the meeting online was the chat function that is built into video conferencing software. During group video discussions, participants could simultaneously express themselves in writing.

"I was very happy to see during this meeting that the chat box comments work very well. Sometimes many of our colleagues, particularly non-native speakers, you have difficulty with the English. Sometimes you have difficulty with expressing [ideas]," says Shobhakar Dhakal, one of the coordinating lead authors at the meeting and a professor at the Asian Institute of Technology in Thailand. "But with this chat box function, we saw actually a lot of good discussions happening, so colleagues could express their views."

The lessons from the April meeting will inform similar meetings in the future. The IPCC survey suggests that most scientists were relatively happy with the virtual meeting, given the danger of traveling during the pandemic, but that online discussions cannot replace in-person ones, especially for teams who don't already know each other. 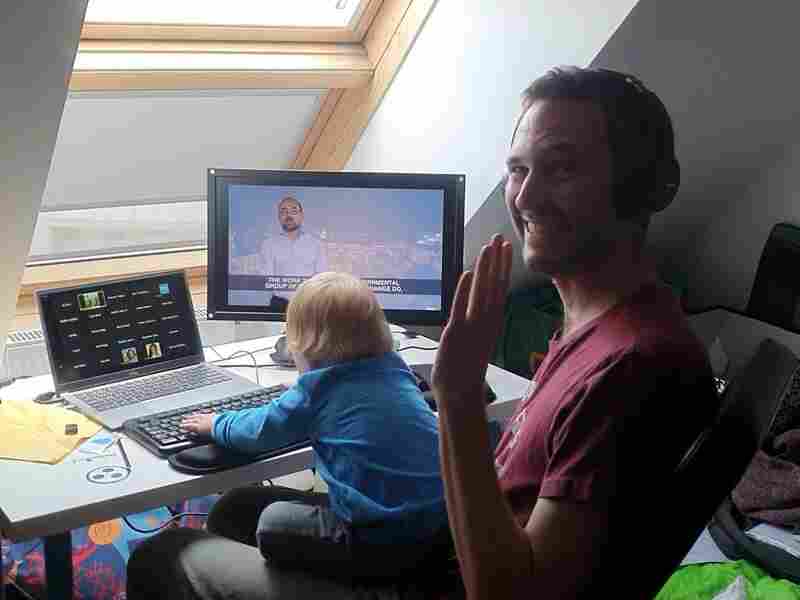 Edward Byers, an author of the latest U.N. climate report and an energy researcher, participated in a virtual meeting with other report authors in April. Samantha Byers/Courtesy of Edward Byers hide caption 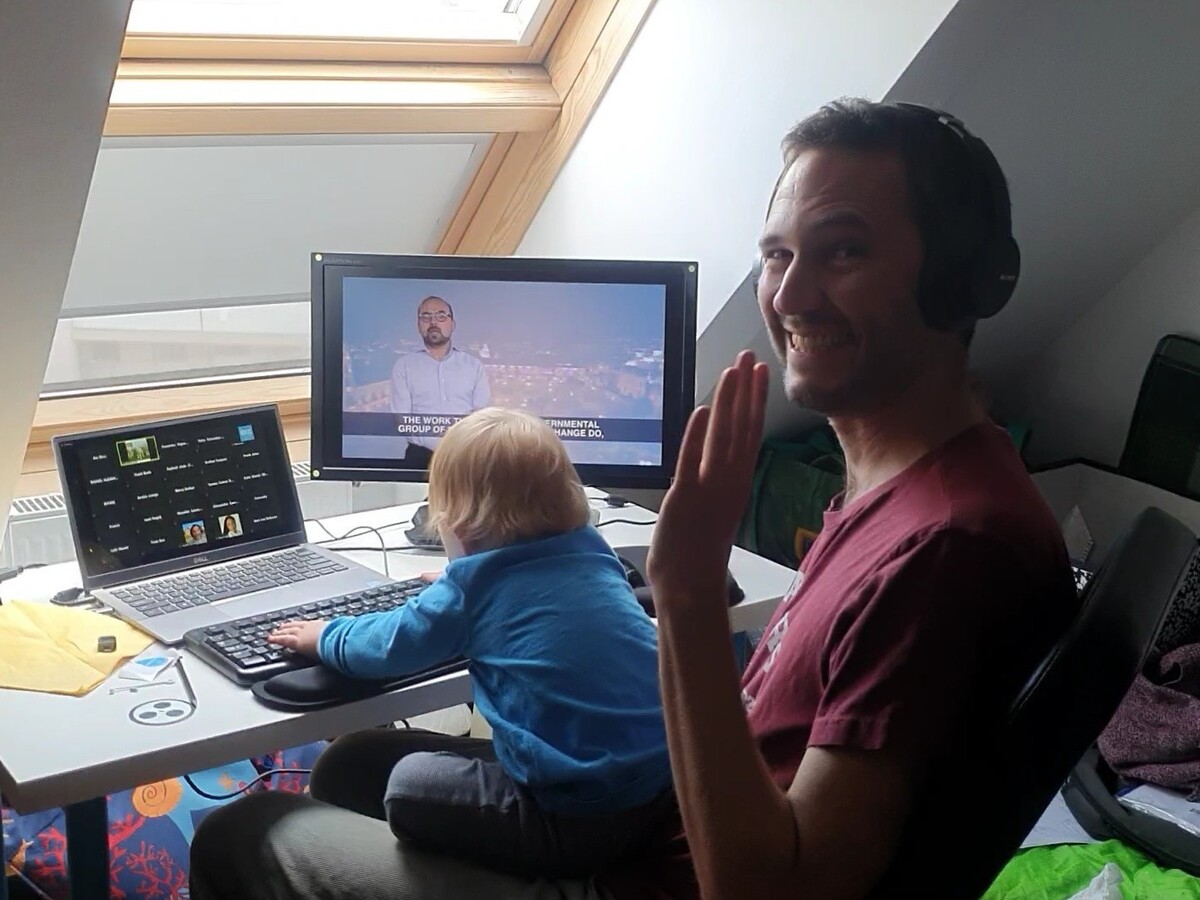 Edward Byers, an author of the latest U.N. climate report and an energy researcher, participated in a virtual meeting with other report authors in April.

"I think it was good that we've all had the opportunity to meet each other on previous occasions and at previous meetings in person," says Edward Byers, an IPCC chapter scientist and energy researcher at the International Institute for Applied Systems Analysis in Austria.

Byers thinks a mix of online and in-person meetings could work well even after the pandemic is over, especially if virtual meetings were shorter and happened more often.

Right now, scientists meet approximately every nine months, which means deadlines for drafts and revisions are also spread out, and scientists procrastinate just like everyone else.

"There is always work going on, but you really get that flurry of activity in the few weeks before the deadline," Byers says. "Perhaps more frequent meetings online every two months or something, maybe that would keep more of the momentum going."