Accessibility links
NPR Music's No. 1 Albums And Songs Of July : All Songs Considered The musical tastes of the NPR Music crew are a delightful jumble. On this edition of All Songs Considered, we pick our favorite music from July 2020, featuring Madeline Kenney, Nubya Garcia and Taylor Swift. 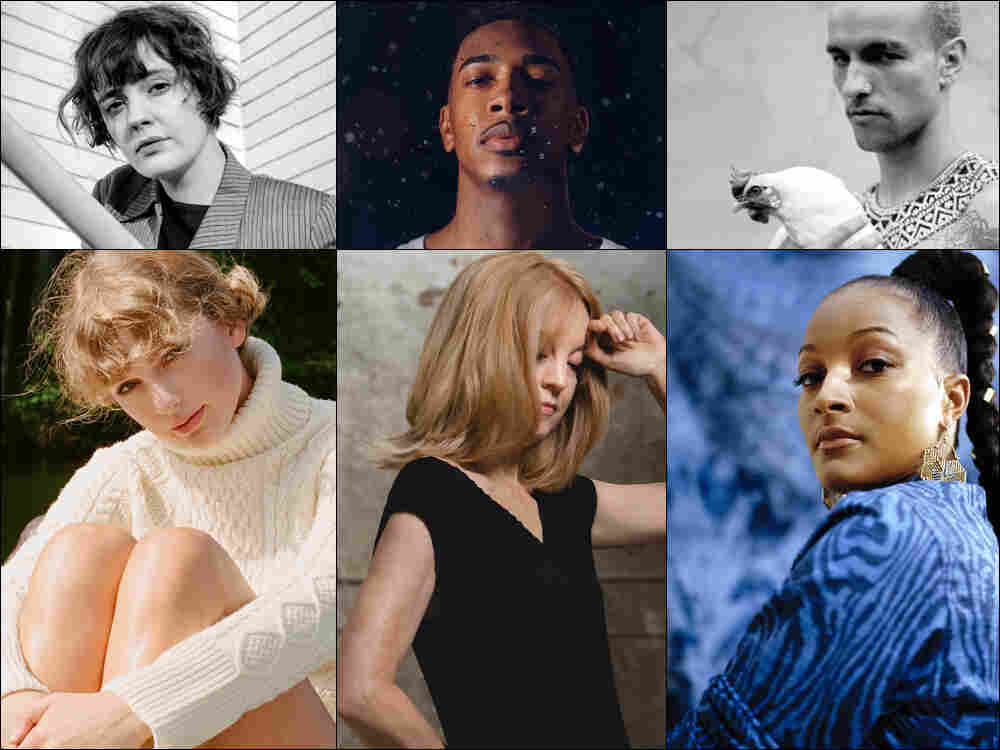 The musical tastes of the NPR Music crew are a delightful jumble. On this edition of All Songs Considered, we pick our favorite music released in July 2020, featuring everything from Madeline Kenney's bummer indie-rock and Nubya Garcia's dubby jazz to Taylor Swift's Aaron Dessner-assisted Folklore and pianist Christian Sands' take on a classic-rock song from 1969. — Bob Boilen

When Madeline Kenney sings, "I'm waiting for this to get easy," on her third record, it rings like a thesis statement on getting older just as much as taking a romantic plunge. Featuring full arrangements and lush textures, Sucker's Lunch pairs perfectly with languid summer days, melding the energy of rock and the aching nostalgia of folk with sleepy elements of R&B and jazz for an unvarnished look at diving into the unknown. It's an indie-rock record for a bummer summer, so when you're overcome with the urge to stare out the window and think about your past and present converging, put on Sucker's Lunch and get lost in your head. — Cyrena Touros

The perfect song for long, hot days in July came from a place where it's winter right now. Australia's King Gizzard & the Lizard Wizard is an incredibly prolific band that's always experimenting with different genres, concepts and instruments — in this case, the microtonal guitar. It's a guitar that has extra frets, meaning you can play the notes in between the notes you're used to hearing. Underneath vocals that float like a haze rising from hot asphalt, that microtonal playing motors through this whole song. In its hypnotic combination, you might lose track of time while listening to it, just like you might zone out on a 100-degree and humid afternoon, when you can't do anything but just lay there and exist. — Raina Douris, World Cafe

Folklore is not a return to the country music of her early career, nor is it an indie album. It is, however, a dramatic departure that applies Aaron Dessner's signature production to Taylor Swift's expert pop sensibilities. Crafted in quarantine, it contains some of Swift's finest songwriting to date: by inhabiting characters and playing with point of view, she explores both her own story and the fairytale stories she's long spun with nuance and virtuosity. — Lyndsey McKenna

Christian Sands: "Can't Find My Way Home" from Be Water

Classic-rock songs often turn into cultural signposts for no clear reason — what does this 1969 Blind Faith epic really mean, anyway, with its obtuse lyrics and addictive, endless vamping? The pianist Christian Sands and his trio make the song matter again. Yasushi Nakamura's exploratory bass line opens the way for Sands's touch on the keyboard, at first light, then increasingly driven by Clarence Penn's kicking drum. In their hands, the song is about questing itself: its loneliness and excitement, the determination it requires, the way the final destination ultimately doesn't matter. Music is the best place to find yourself, getting lost. — Ann Powers

Long before we saw the early signs of a reckoning from big tech companies, the illustrious composer-bandleader Maria Schneider was sounding the alarm. But how do you translate an argument about intellectual property and data mining into the realm of large-ensemble jazz? On the title track of her astounding new double album, Schneider answers that question with a gathering mass of sound, a mounting sense of dread and some hard-stuttering rhythmic effects. — Nate Chinen, WBGO

Note: Data Lords is only available through ArtistShare.

Gabriel Garzón-Montano has been making amazing music since 2014's Bishouné: Alma Del Huila. He recently announced his new album, Agüita, which is his most diverse-sounding project to date. The title track is a perfect example of him pushing the boundaries of his art. It is a banger, but more importantly, it is Gabriel being unapologetically confident, which you can definitely hear and feel. — Tarik Moody, Radio Milwaukee

One of the stars in the contemporary U.K. scene, saxophonist and composer Nubya Garcia's multidimensional jazz sound includes soul and influences from the African Diaspora. Garcia's mom is from Guyana, her dad is Trinidadian; this song affirms the music she heard growing up in her musical house like reggae, dub and other kinds of Caribbean music. Throughout "Source," her eclectic, modern compositional style reveals a prominent, pulsing dubstep that will make you want to move, but its groundedness also provides a reminder of where we all come from and what it means to be home. — Suraya Mohamed