Accessibility links
Census Bureau To End All Counting Efforts On Sept. 30 Under pressure to meet legal deadlines that Congress hasn't changed despite pandemic-related delays, the Census Bureau announced a new end date after NPR reported that door knocking will be cut short. 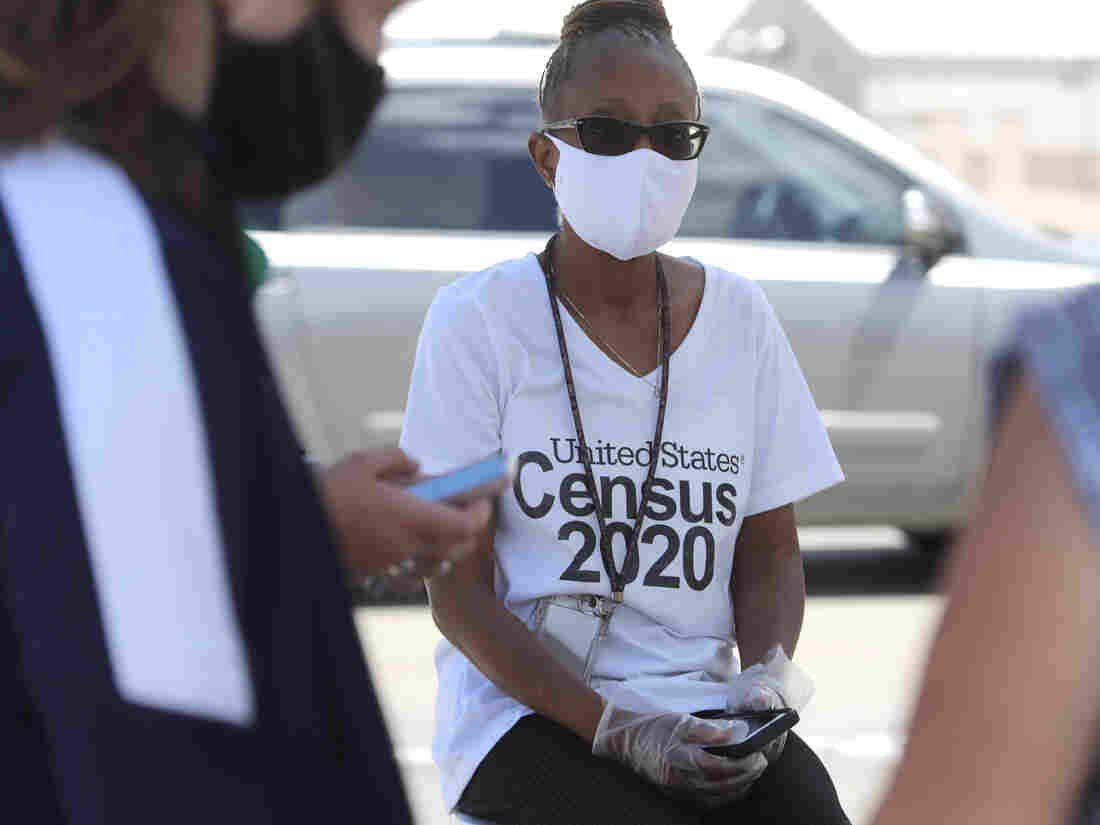 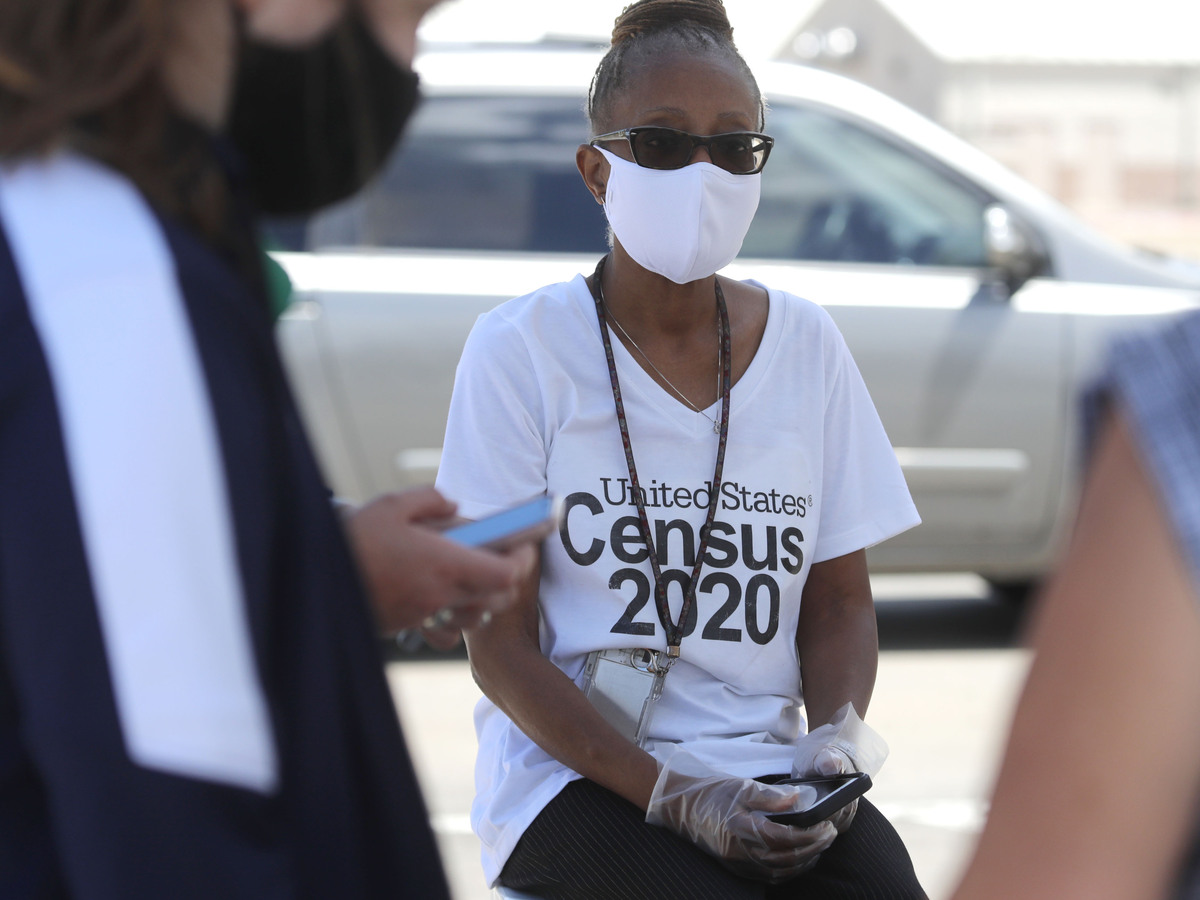 U.S. Census Bureau worker Jennifer Pope wears a face covering at a walk-up counting site in Greenville, Texas, on July 31. The bureau is ending all counting efforts for the 2020 census on Sept. 30, a month sooner than previously announced, the bureau's director confirmed Monday.

The U.S. Census Bureau is ending all counting efforts for the 2020 census on Sept. 30, a month sooner than previously announced, the bureau's director confirmed Monday in a statement. That includes critical door-knocking efforts and collecting responses online, over the phone and by mail.

The latest updates to the bureau's plans are part of efforts to "accelerate the completion of data collection and apportionment counts by our statutory deadline of December 31, 2020, as required by law and directed by the Secretary of Commerce" who oversees the bureau, Director Steven Dillingham said in the written statement posted on the bureau's website.

These last-minute changes to the constitutionally mandated count of every person living in the U.S. threaten the accuracy of population numbers used to determine the distribution of political representation and federal funding for the next decade.

With roughly 4 out of 10 households nationwide yet to be counted, and already delayed by the coronavirus pandemic, the bureau now has less than two months left to try to reach people of color, immigrants, renters, rural residents and other members of historically undercounted groups who are not likely to fill out a census form on their own.

The bureau's announcement comes after NPR first reported that the agency had decided to cut short door-knocking efforts, which make up the largest and most expensive operation for a head count that is estimated to cost around $16 billion. Those in-person interviews with unresponsive households started last month in some parts of the country and are set to expand nationwide on Aug. 11.

In a statement released Tuesday, four former Census Bureau directors warn that not extending census reporting deadlines "will result in seriously incomplete enumerations in many areas across our country."

They're calling for Congress to appoint an independent institution to determine ways to assess the quality of the 2020 census results and for the bureau to issue daily reports on its progress in the final months to "assure stakeholders that a fair and accurate enumeration is underway."

"We need the extra time to be able to ensure that the hardest-to-count communities are including in the count. That is what the Constitution requires," says Vanita Gupta, a former Obama administration official who now heads The Leadership Conference on Civil and Human Rights. "There is no other reason for the Trump administration to be rushing the census if they didn't have a partisan or illegitimate motive."

Keeping with the Dec. 31 legal deadline for producing the latest state population counts would guarantee that President Trump receives those numbers while still in office, even if he is not reelected.

With little authority, Trump is seeking to change those numbers by attempting to exclude unauthorized immigrants despite the Constitution's requirement to include the "whole number of persons in each state." The president's recent memo calling for that change has sparked multiple federal lawsuits from challengers who are asking courts to block the administration from carrying it out and declare it unconstitutional.

In order to have the first batch of census results ready by the end of this year, Dillingham said in his statement the bureau is planning to "streamline" the processing of responses it collects from households.

"To me, that means perhaps rush or use methods that may have not been proven to come up with the most accurate data," says Ditas Katague, a former chair of the Census Bureau's National Advisory Committee who now directs California Complete Count, the state's census outreach campaign. "That really causes some concern."

For days, the bureau has been sending mixed signals about its plans by quietly removing references to Oct. 31 — the previously announced end date for all counting efforts — from its website.

Before the pandemic hit, counting for the 2020 census was originally supposed to be finished by the end of July. But in April, with public support from President Trump, the bureau announced that it needed to extend its timeline, including pushing back the end of counting to Oct. 31.

But during a hearing last week before the House Oversight and Reform Committee, Dillingham signaled a shift in plans by telling members of Congress that "the Census Bureau and others really want us to proceed as rapidly as possible."

The bureau also asked Congress to push back by four months the legal deadline of Dec. 31 for reporting the new state population counts to the president. Delaying that deadline would allow the bureau to keep counting through Oct. 31 to "ensure the completeness and accuracy of the 2020 Census," Dillingham and Commerce Secretary Wilbur Ross said in a statement released in April.

Democrats in Congress and many census advocates have become increasingly concerned that the White House is pressuring the bureau to stop counting soon in order to benefit Republicans when House seats are reapportioned and voting districts are redrawn.

As early as May, top career officials at the bureau said the bureau had already "passed the point" of meeting the current census deadlines.

As negotiations over the latest coronavirus relief package continue, there is a window for lawmakers to include a provision that would give the bureau more time.

So far, however, only Democrats have introduced legislation that would extend deadlines, and Republicans have released no similar proposals.

Sen. Steve Daines, a Republican from Montana, however, did write this week to Senate Majority Leader Mitch McConnell, R-Ky., and Senate Minority Leader Chuck Schumer, D-N.Y., in support of extending the census timeline.

"Given the rural nature of Montana, and the additional challenges brought about by the ongoing COVID-19 pandemic, reverting the deadline back to September 30, 2020 will leave tens of thousands of Montanans uncounted and underrepresented at the federal level," Daines wrote in the letter.

Hundreds of philanthropic groups, nonprofit organizations, professional associations and civic groups have written to Senate leaders, Ross and Dillingham to try to get the bureau more time for the census.

"There is no scientific rationale to curtail the data-collection period for this constitutionally mandated activity," the American Statistical Association's president-elect, Robert Santos, wrote in a letter to Senate leaders.

Sen. Jeanne Shaheen of New Hampshire — the top Democrat on the Senate appropriations subcommittee that funds the bureau — has written to Dillingham expressing concern that the bureau is not "free of political meddling" and asked for the bureau to clarify whether it's still requesting Congress to extend census deadlines.

The top House appropriator for the bureau, Rep. José Serrano, D-N.Y., disclosed in a letter to Ross this week that the bureau recently stopped conducting weekly briefing calls about the 2020 census for House Appropriations Committee staff after the arrival of the Trump administration's two new political appointees — Deputy Director for Policy Nathaniel Cogley and Cogley's senior adviser, Adam Korzeniewski.

The Census Bureau's public information office has not responded to NPR's question about why the bureau stopped its weekly calls with the committee staff.

The chair of the House oversight committee — Rep. Carolyn Maloney, D-N.Y. — has requested that both Cogley and Korzeniewski, as well as top career officials at the bureau, appear virtually for transcribed interviews this month.