Accessibility links
Review: 'An American Pickle' Gives You Double The Seth Rogen In a new film streaming on HBO Max, Rogen plays both a Polish immigrant who wakes up 100 years after falling into a pickle barrel and the great-grandson into whose modern life he emerges.

Seth Rogen Finds Himself (Twice) In 'An American Pickle'

Seth Rogen Finds Himself (Twice) In 'An American Pickle' 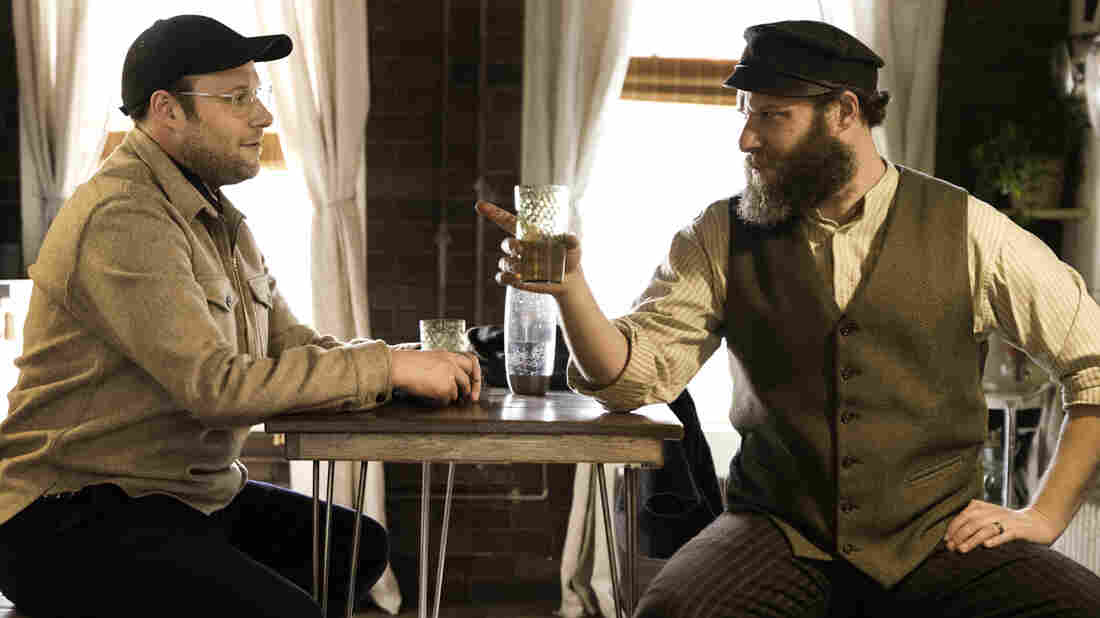 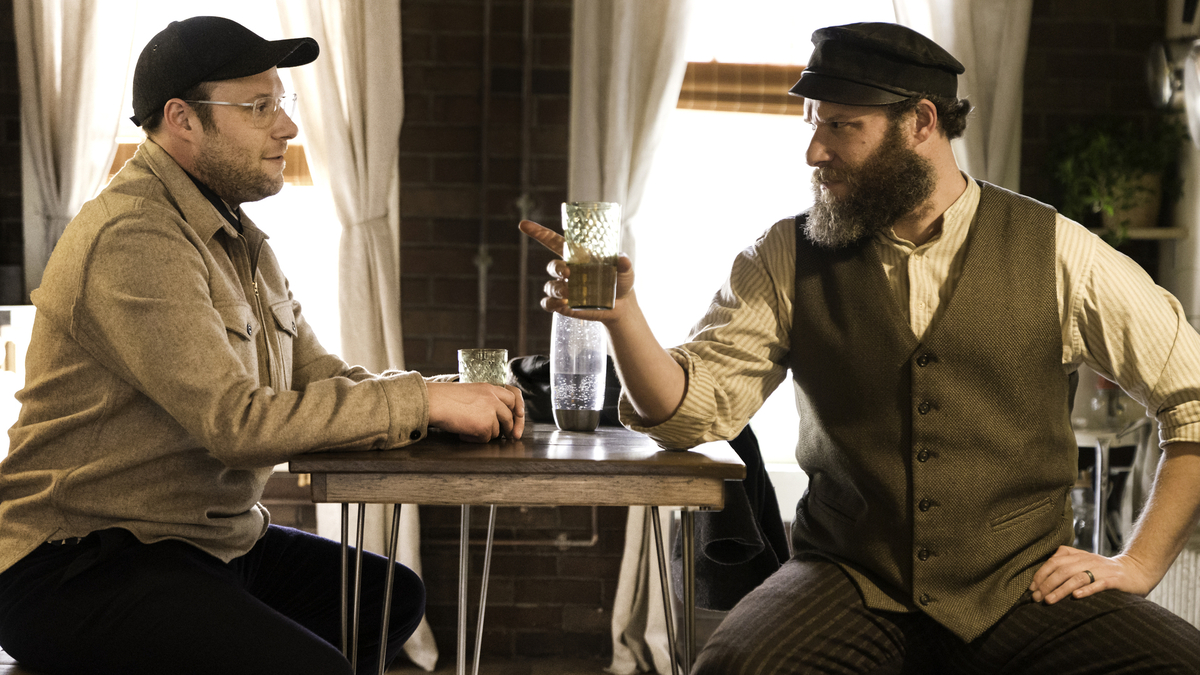 When you think about a Seth Rogen movie, he's almost always got pals around. He's made comedies with James Franco, Jonah Hill, Craig Robinson, Adam Sandler and — if you count Steve Jobs — even Michael Fassbender. It only makes sense he would eventually make a buddy movie with himself.

An American Pickle, streaming on HBO Max on Aug. 6, is adapted from a four-part Simon Rich story that appeared in The New Yorker in 2013. Called "Sell Out," it's about a Polish immigrant named Herschel (whose wife is pregnant) who falls into a pickle barrel in 1920 and wakes up, perfectly preserved, 100 years later. This premise, neatly told in the first six short paragraphs, is both absurd and (no pun intended) narratively rich. In the film, which Rich adapted for the screen himself, both the preserved Herschel and his great-grandson Ben — who are the same age — are played by Seth Rogen. What follows is part wacky opposites-attract picture, part family story, part silly caper and, most interestingly, part funny (but also thoughtful) examination of what our ancestors would think of us, especially if they made great sacrifices to give us what we now have.

In the original story, Herschel's descendant is Simon Rich himself, a script doctor in Hollywood. Here, he's Ben, an app developer who's spent five years of his life trying to get an app off the ground that scans bar codes to tell you how ethically made a particular product is. For a whole variety of reasons — from "what's an app?" to "who cares?" — this confounds Herschel. He quickly discovers, too, that the small cemetery where his wife is buried has been dishonored by the presence of a giant billboard for vanilla vodka (chosen perhaps because Rogen has enormous fun pronouncing "vanilla vodka" in his version of Herschel's accent). This cannot stand. So Herschel sets out to do what he knows best: make pickles and sell them to Brooklyn, so he can reclaim the cemetery. This does lead to some familiar material about hipsters who love artisanal foods, but it's executed pretty well, and Rich's script keeps it moving.

I don't want to give away too many of the film's surprises, but there come to be tensions between Herschel and Ben, these two men who are both the same age and generations apart, as Herschel tries to apply his 1920 work ethic to a 2020 economy. He's stranded without anyone he knows or anything that's familiar, while Ben is driven to question whether he's done with his life what he should have done (and perhaps to jealousy at what Herschel can accomplish). There's nothing like being confronted by a man who once took a job hitting rats with a club in order to give you a good life to make you reevaluate what you've done with your opportunities.

For lack of a better way to say it, Rogen does have good chemistry with himself under the eye of director Brandon Trost, an experienced cinematographer who's worked on a wide variety of films from The Disaster Artist to Can You Ever Forgive Me? The technical work to place Ben and Herschel in scenes together is convincing, Rogen is pretty good at reacting to whatever it is he's reacting to in scenes where he's playing opposite himself, and the editing is good at building the Seth Rogen setup/Seth Rogen punchline timing. Rich walks a pretty fine line between mischief and bad taste in the script, and he does it without tipping too far into the latter. (It's also fun to see such a concentrated dose of Rogen where he doesn't rely on the unrelenting weed jokes I think one could argue he's perhaps exhausted.)

I should acknowledge that there are a few places where I, as a not-Jewish person, wondered whether Herschel's enterprising and sometimes sketchy business practices (and shots of him counting his money) were brushing up against stereotype. But the film on the whole has the warmth of a call from inside the house when it comes to its picture of Jewish identity (which Rogen discussed with Marc Maron on WTF recently), and bits like Herschel's hope that important heroes who have emerged during his hibernation will turn out to have been Jewish are pretty funny.

It's candidly felt weird trying to evaluate these direct-to-video releases this summer — this one was originally with Sony before HBO Max picked it up this spring. Particularly with such an offbeat story and such a small cast, how would this movie feel as a big-screen summer release? Like Superbad? Like something much less successful than Superbad? And how is Rogen going to be received in a film in which almost no one else has a role of any significance (Succession's Sarah Snook briefly drops in as Herschel's wife in the prologue), when he's made such a career on group projects?

Let's focus on this much: It's a clever idea, it has some good jokes, and it approaches the idea of immigration to the United States in a way I haven't seen. That's not to even mention the fact that being preserved in a pickle barrel and waking up in 100 years has never been more appealing.