Accessibility links
Primary Results: Kansas, Michigan, Missouri, Arizona, Washington State Some Republicans worry that Kris Kobach, a polarizing conservative who lost the Kansas governor's race in 2018, would put a solid GOP Senate seat in jeopardy along with their Senate majority. 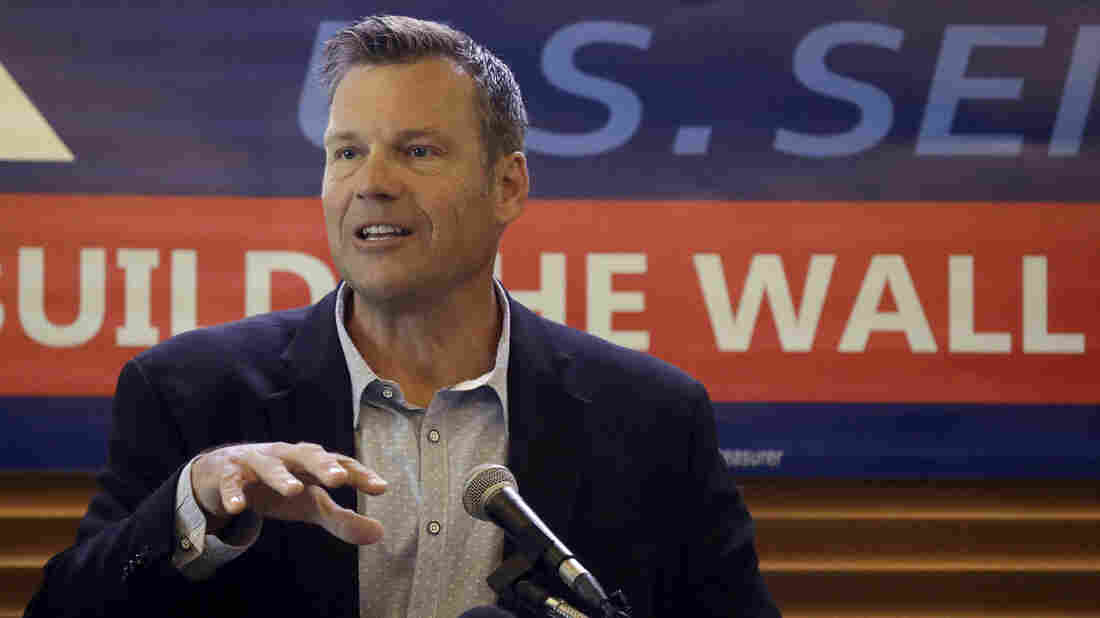 Some Washington Republicans worry that Kris Kobach, a polarizing conservative who lost a race for governor last year, would become the GOP's Senate candidate and lose in the general election. Charlie Riedel/AP hide caption 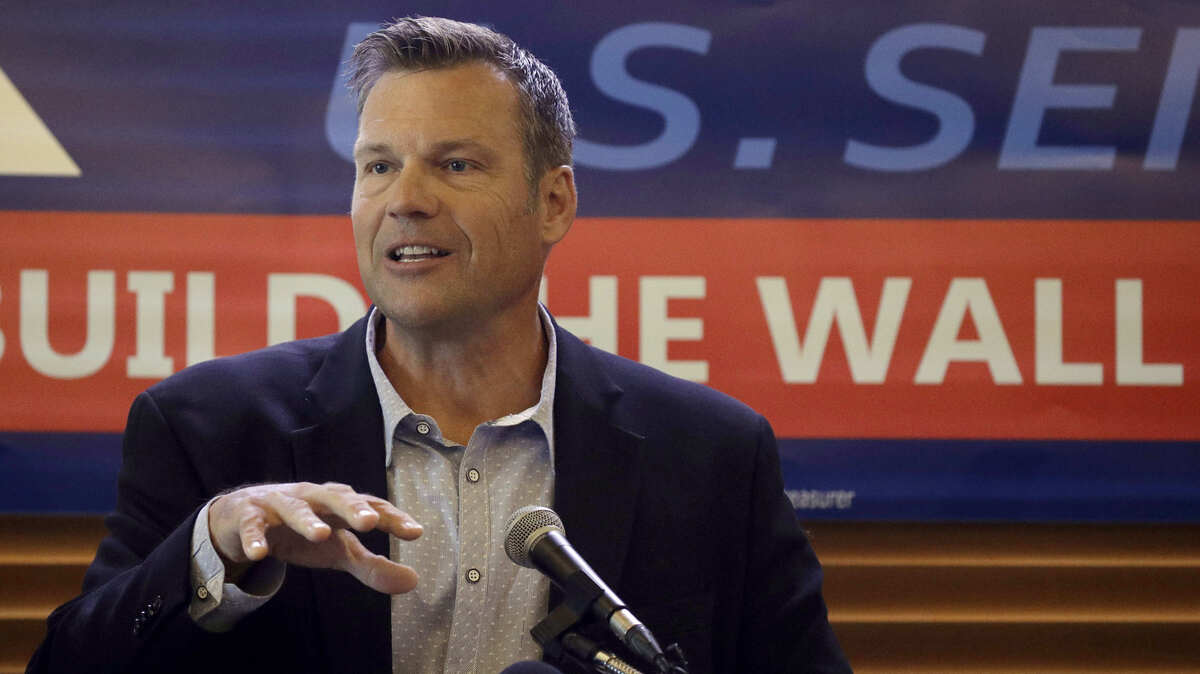 Some Washington Republicans worry that Kris Kobach, a polarizing conservative who lost a race for governor last year, would become the GOP's Senate candidate and lose in the general election.

Voters head to the polls in a handful of states Tuesday, in the latest tests of voting systems stressed by the ongoing pandemic.

1. Kansas U.S. Senate — Republican: This one has the attention of party leaders.

Longtime GOP Sen. Pat Roberts is retiring, and a slew of Republicans are seeking to replace him, with Rep. Roger Marshall, former Kansas Secretary of State Kris Kobach and businessman Bob Hamilton considered the leading contenders.

Kobach is a polarizing conservative who holds hard-line stances on immigration and alleged voter fraud. He lost the governor's race to Democrat Laura Kelly in 2018, and many Republicans think his nomination would similarly cost the party a Senate seat.

And with the GOP majority in the Senate looking more and more tenuous, many Republicans think they can't afford to put a seat in jeopardy in deep red Kansas.

Some Democrats are so eager to face Kobach that they're behind a campaign ad touting Kobach as a true conservative and denigrating Marshall.

Democratic state Sen. Barbara Bollier, a retired physician and former Republican who's raised millions of dollars for her campaign, is likely to be awaiting the winner of Tuesday's GOP race. Kansas hasn't elected a Democrat to the U.S. Senate since 1932. 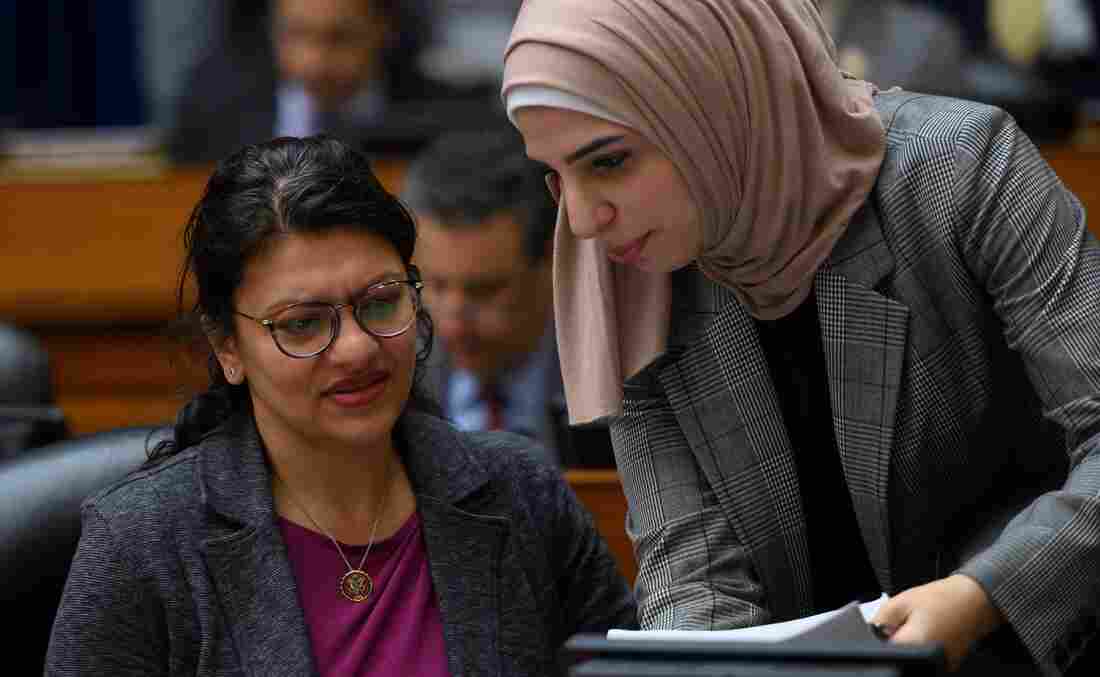 First-term progressive Rep. Rashida Tlaib has one such challenge, and it's a rematch. Detroit City Councilor Brenda Jones topped Tlaib in a special election to serve in Congress briefly, and then Tlaib eked out a win over Jones in 2018 for a full term.

Since then, though, Tlaib, one of the first Muslim women in Congress, has significantly raised her national profile, along with three other noteworthy first-term progressive women who've referred to themselves as "the squad." Shortly after being sworn in, Tlaib invoked expletives to declare she wanted to impeach President Trump, giving Republicans evidence that Democrats were determined to do so from the get-go.

Jones told Quinn Klinefelter of member station WDET that she's running because voters want a different tone in Congress. The district is one of the poorest in the nation, Klinefelter says, and now hit hard by job losses and the coronavirus.

3. Missouri's 1st Congressional District — Democratic: The other intra-party tussle of note in a left-leaning district comes in St. Louis.

Rep. William Lacy Clay, who's been in office nearly 20 years, faces a second challenge from nurse and activist Cori Bush. Clay topped Bush by 20 percentage points in 2018, but Bush's profile has risen since then, partly because of a documentary that also profiled New York Rep. Alexandria Ocasio-Cortez.

The Democratic primary is another example of a progressive challenging a well-known incumbent. Bush has been endorsed by Vermont Sen. Bernie Sanders; Justice Democrats, a group closely aligned with Ocasio-Cortez; and Jamaal Bowman, who dispatched with longtime New York Democratic Rep. Eliot Engel earlier this summer.

Clay's backers, including fellow members of the Congressional Black Caucus, maintain he's "no moderate Democrat," citing, for instance, his support of "Medicare for All."

Just on Friday, the House unanimously passed a rare ethics resolution to reprimand incumbent Rep. David Schweikert for breaking congressional and campaign finance rules. Schweikert admitted to the violations and agreed to pay a $50,000 fine.

Schweikert won his last election by 10 points, and there are four Democrats vying for a general election matchup this year, including Anita Malik, whom Schweikert defeated in 2018.

As Steve Goldstein of member station KJZZ has reported, protests against racial injustice are motivating many voters in the Scottsdale-centered suburban district, as well.

5. Michigan's 3rd Congressional District — Republican: This seat is being left vacant by the retirement of Rep. Justin Amash, an independent who left the GOP in 2019 and voted to impeach President Trump. Amash also briefly considered running to be the Libertarian Party's presidential nominee before opting against it.

The district, which includes Grand Rapids, has a Republican lean, according to the Cook Political Report. One of its counties, Kent County, has long been reliably Republican — Grand Rapids was the boyhood home of President Gerald Ford — but it's also a suburban area that Democrats aim to win in November.

Former Department of Justice attorney Hillary Scholten is unopposed on the Democratic ballot, but there are a handful of candidates on the GOP side, including state Rep. Lynn Afendoulis.