Beyoncé's 'Black Is King' Is A Sumptuous Search For Divine Identity

Beyoncé's 'Black Is King' Is A Sumptuous Search For Divine Identity 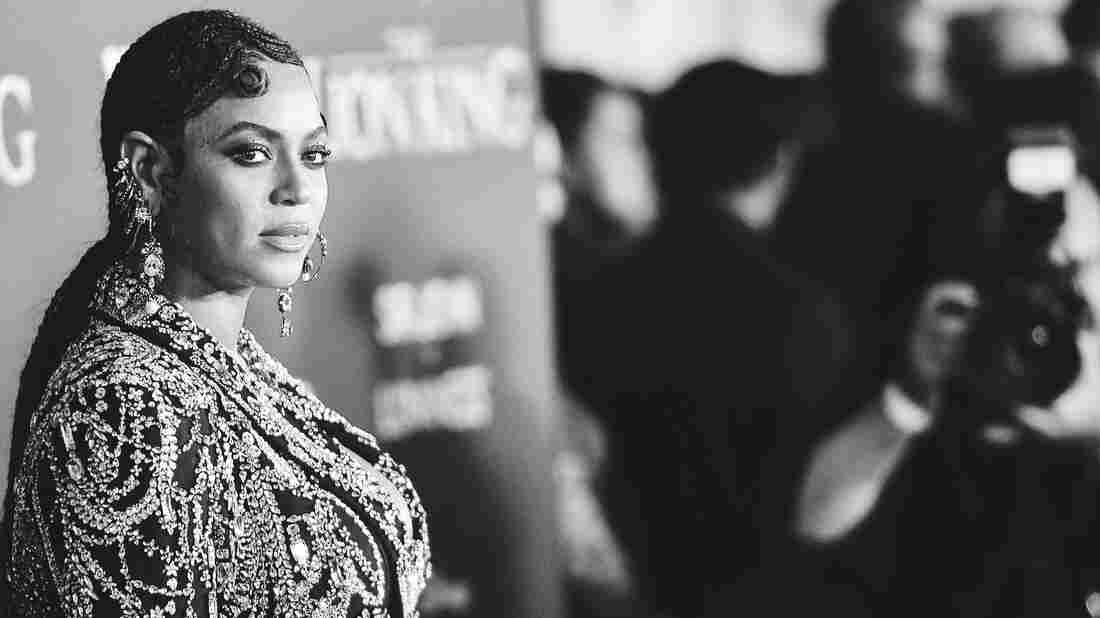 Beyoncé, at the premiere of Disney's The Lion King on July 09, 2019 in LA. Matt Winkelmeyer/Getty Images hide caption 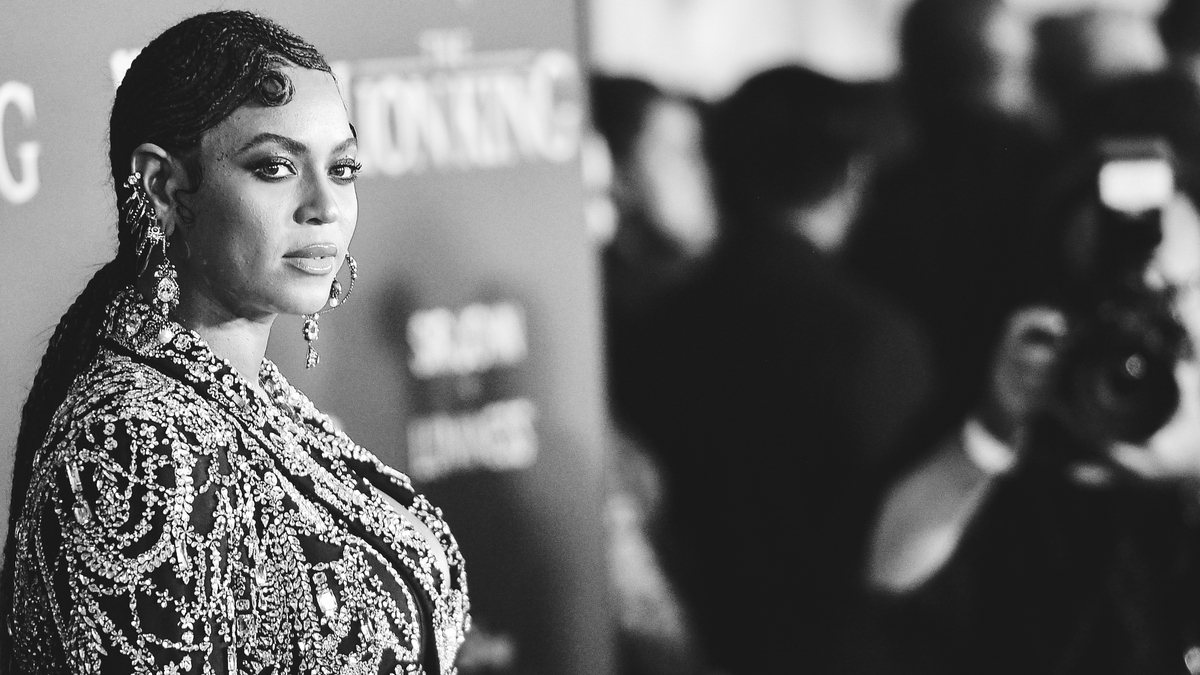 "To live without reflection for so long might make you wonder if you even truly exist."

There is a lot that can be communicated through longing. That internal sense of a missing piece and yearning for completion can be all-consuming. It can change the course of your life. For most, that might be a wanting for love, or the coveting of success. But in Beyoncé Knowles' Black Is King — directed by the star herself and released Friday on the streaming service Disney+ — that longing is for the certainty of identity.

A visual companion to the album The Gift — itself a companion to the release of the live-action remake of Disney's The Lion King — Black Is King is a retelling, of sorts, of the same story. This time though, it centers on ideas of Black belonging and regality. How has Blackness existed in the past? What does it mean in the present? How might it look in the future? In this extended metaphor, "king" is a synonym for the innate greatness that has been stolen from Black people the world over. With this project, Beyoncé seeks to restore that greatness to those of her lineage.

Knowles has long said she is a visual thinker, and those skills are never more apparent than when she applies them to her music. She is also a consummate collaborator, and as with Homecoming before it, the sheer scale of this project indicates how much she is able to delegate to others in realizing her creative vision. The music of The Gift itself draws on the legacy of afrobeat, blending the work of African artists like Burna Boy, Yemi Alade, Tiwa Savage, Nija and Shatta Wale with contributions from Black American artists like Tierra Whack, Pharrell Williams, Childish Gambino and Knowles' husband, JAY-Z. The visuals, however, stand as a statement on their own, and extend the themes of Knowles' other directorial outings.

In Lemonade, Knowles drew on the symbolism of water to signify rebirth and renewal in her marriage. In Black Is King, she revisits this motif, but takes it a step further. Here, she graduates from the sea to the stars, imagining a world in which Blackness and Black people are unconstrained by the limits of the earthly world. The water becomes a liminal space — the barrier between the here and the hereafter. The shore is the doorway to true spiritual freedom.

At the film's beginning, Beyoncé launches a child in a basket onto the river, echoing the biblical story of Moses. At its end, she collects him again, reborn, renewed and given access to a new, free world after enduring the tribulations of rough waters. In Black Is King, water is again transformative. Its mythical power is reflected in both the pain of sailing Black people across endless oceans for subjugation and its healing potential to wash away the violence of that history.

Black Is King is, in many ways, an exercise in wandering, searching and seeking a divine identity. In recent years, Knowles' work has taken a sharp turn towards the politics of representation. From her self-titled album to Homecoming, she has been exploring and examining the infinite malleability of Black cultural production. In this newest film, she makes that explicit. Using music as a conduit, she tries to be expansive in her view of the creative potential of Black people, taking time to highlight both the extremes of hyper-excellence and the divinity in the mundanity of everyday life.

'Homecoming,' From The Bleachers: Members Of Beyoncé's Marching Band Look Back

Beyoncé has made it part of her own mission to create divine images of Black people that can be, and obviously are, widely consumed. In some ways, this is a corrective to how Black people have been depicted in the past — lazy degenerates in the U.S., poor and starving in an ill-defined Africa, largely invisible in the Caribbean. But even that deserves interrogation — the idea of a corrective presumes a white gaze. Black people have always found ways to see the beauty and sanctity in each other, so what is there to correct? It also calls into question the limits of a production like this. Beautiful as it is, how does it aid Black people to associate blackness with wealth and riches many of us will never attain in this life? But capitalist concerns aside, Beyoncé takes great pains to associate Blackness not just with literal kings and queens, but also with community, consciousness and greatness. "I see us reflected in the world's most heavenly things," she says. "Black is King."

One of the critiques of the album in its original form was that it flattened the many distinct cultures and styles of the African continent into an easily consumable product, one that did not begin to approach a comprehensiveness of the sources it pulled from. Largely, that critique stands. But being too ambitious is hardly a negative. In fact, the project's preference for breadth over depth makes a kind of spiritual sense — where do you start in your quest to find your lineage when you've got an entire continent to scour?

Knowles' longing for an explanatory myth resonates deeply in Black Is King. Her own mother, Miss Tina the Matriarch has become a personified recurring theme in her work, as has her invocation of lineage. Always, Beyoncé takes pains to reach back before moving forward. But after two or three generations, who is there for her to reach back to? Who can she draw on? Whose ancestral memory can she reference? Black Is King marries the mundane and the divine in an effort to reconnect to the forgotten ancestry of all the Black peoples across the diaspora who have been ripped from their history by the violence of slavery and colonialism.

Before "Already," John Kani as Rafiki is heard in voiceover: "I know who I am, the question is who are you?" For many Black people, that question skews existential. Who are we without those who came before us? Who are we when we don't know who came before us? Beyoncé tries to draw a through-line from the diaspora back to the homeland that connects us, not necessarily to our roots, but to the possibilities that open up when we acknowledge that our lineage has more breadth than we can ever know. But she also asserts that we already have that knowledge within us. "Long live the king, you a king you know it."

Drawing on the themes of The Lion King — inheritance, self-identity and determination — Knowles repurposes the story as a clarion call to Black people. "I never left you and never will," Mufasa declares. "Remember who you are." In her vision of Black life and prosperity, the ancestors are all around us and in each other, waiting for us to come home and reclaim them. We merely have to reach out to them. Beyoncé situates power in the body, in the skin and in hair. She creates a myth out of what can be accessed and what is left behind.

In the face of possible annihilation both physical and psychic, Beyoncé holds out hope for salvation on the Otherside. She encourages us to brave the rapids of the Nile, cross the river Jordan and find ourselves in the promised land. With Black Is King, Beyoncé created a vision of the world she wanted to see — both as it is and as it should be. In her world, the hard day's journey is rewarded with joy, happiness and a final connection to family, because "blood keeps the score of your blessings and trials."