Accessibility links
Beirut Rocked By Massive Explosion, Causing Deaths And Widespread Damage The dramatic blast was caught on numerous videos by people who had been filming a fire that was burning at an industrial port in Lebanon's capital. 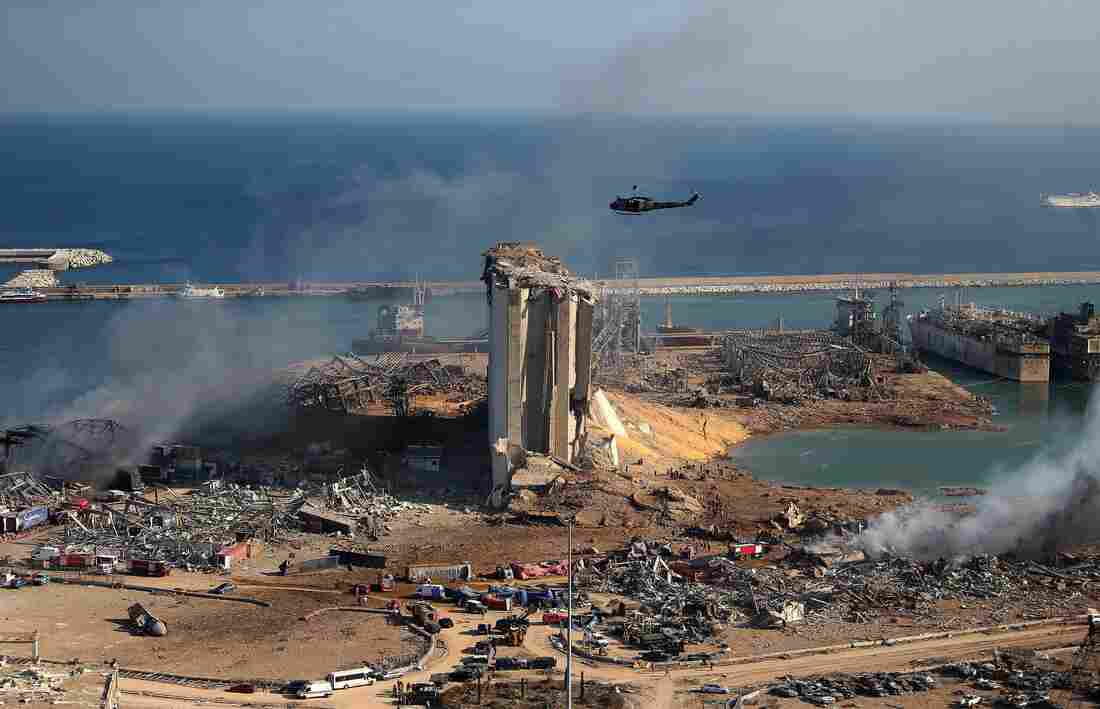 A helicopter hovers over damaged grain silos in Beirut's port on Wednesday, one day after a powerful explosion tore through Lebanon's capital. STR/AFP via Getty Images hide caption 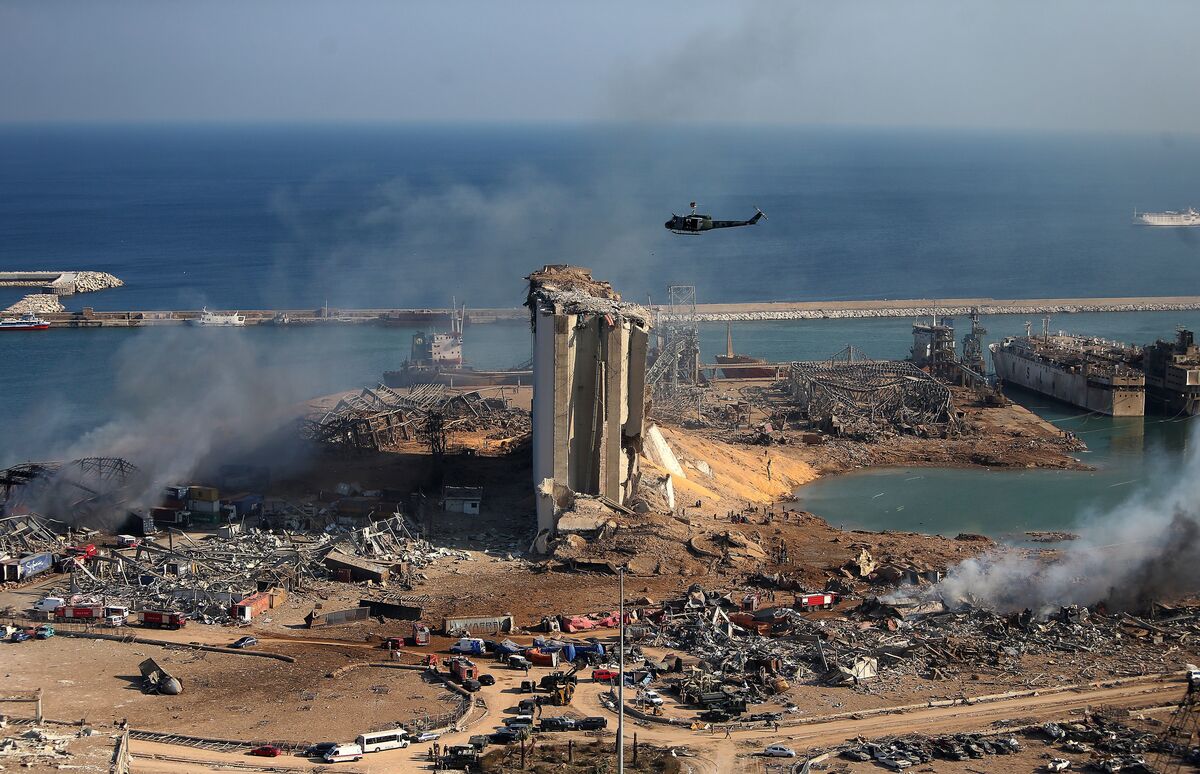 A helicopter hovers over damaged grain silos in Beirut's port on Wednesday, one day after a powerful explosion tore through Lebanon's capital.

A huge explosion rocked Beirut on Tuesday, killing at least 100 people and shattering windows and damaging buildings across a wide swath of the city, according to officials. The blast sent a huge mushroom cloud into the sky, seemingly emanating from a spot close to where a large fire had been burning.

"This is a great national disaster," Prime Minister Hassan Diab said. The country is already struggling with a terrible economy and the COVID-19 pandemic.

"Beirut is grieving," Diab said. He added that there will be "accountability" for those who are deemed responsible. 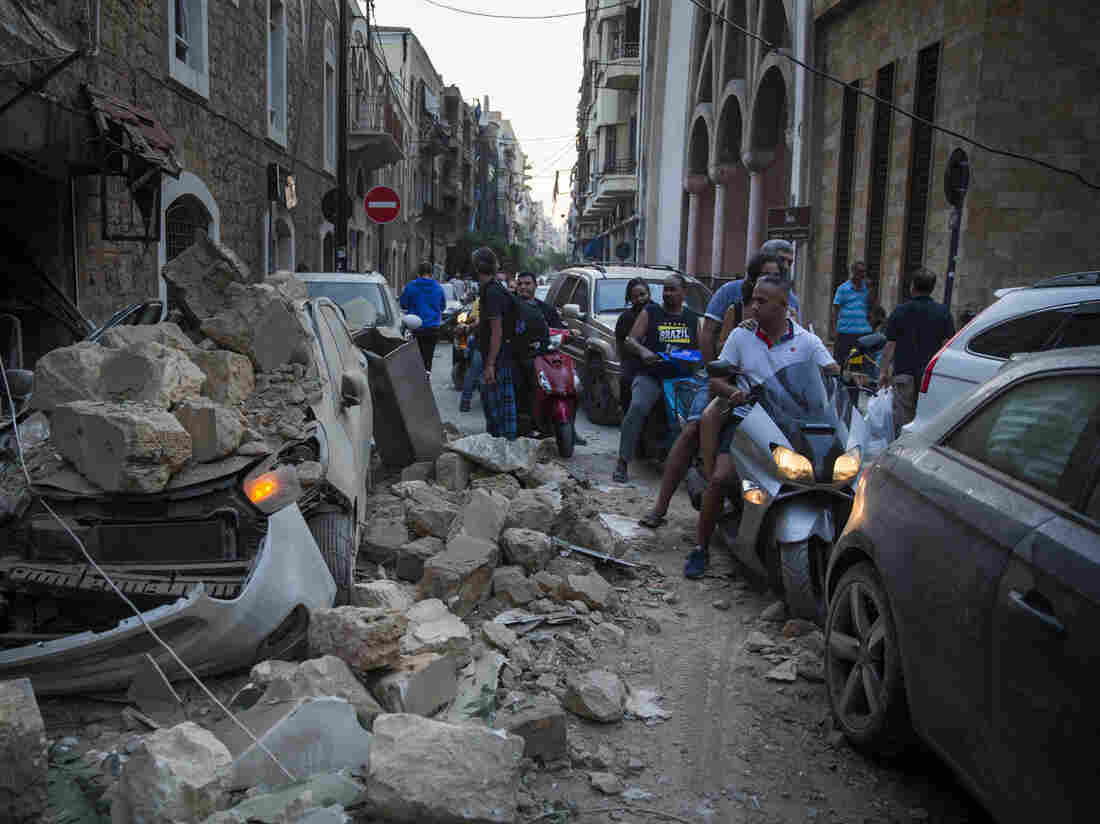 A building wall collapsed onto a car in Beirut. The damage was so severe, according to LBCI Lebanon News, that military bulldozers had to clear roadways for firefighters and ambulances. Daniel Carde/Getty Images hide caption 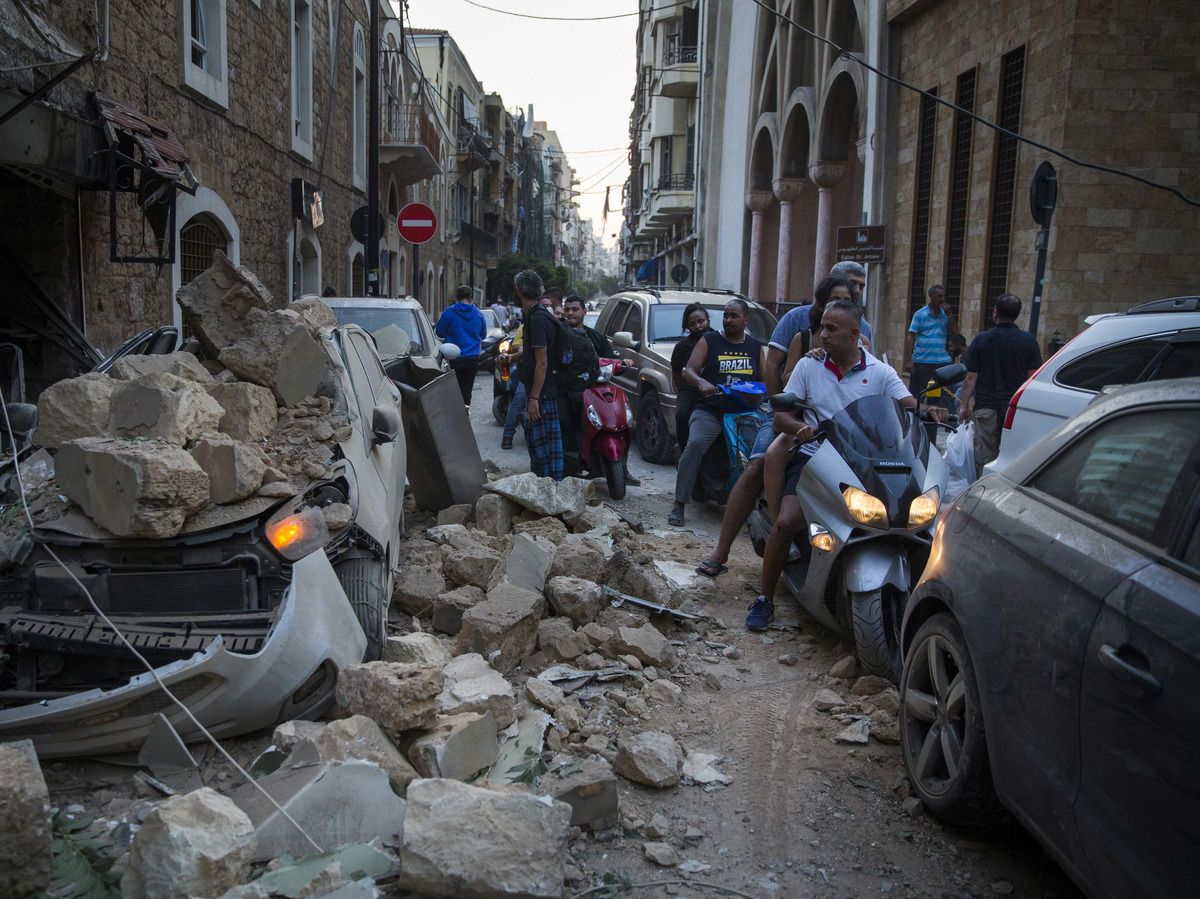 A building wall collapsed onto a car in Beirut. The damage was so severe, according to LBCI Lebanon News, that military bulldozers had to clear roadways for firefighters and ambulances.

The dramatic explosion was caught on numerous videos by people who had been filming a fire at an industrial port in Lebanon's capital.

Officials said nearly 4,000 people were hurt — the latest update as damage and fatality reports came in from across the city. The tally could rise as officials account for people who have been reported missing and as crews gain access to collapsed buildings.

From a friend in #beirut pic.twitter.com/XAKSmUOau5

The Lebanese Red Cross said 75 of its ambulances and 375 EMTs have responded to the crisis. Earlier, the group said it was receiving "thousands of calls" on its emergency line and implored people to use the line "only for critical and severe cases."

Several hours after the blast, emergency crews still had not been able to reach all of the wounded people in their homes, the Lebanese Red Cross said. It added that it has set up first aid and triage stations in outdoor areas.

Early reports suggested the explosion was triggered by a fire at a large fireworks warehouse. Some of the video recordings show what looked to be flashes of smaller explosions before the separate and much larger blast, which generated an enormous shock wave.

The government has launched an investigation into the cause of the explosion.

Maj. Gen. Abbas Ibrahim, the head of Lebanon's Directorate of General Security, visited the blast site Tuesday. He told Lebanese journalists that the explosion was likely powered by highly explosive materials that had been confiscated and stored at the port. 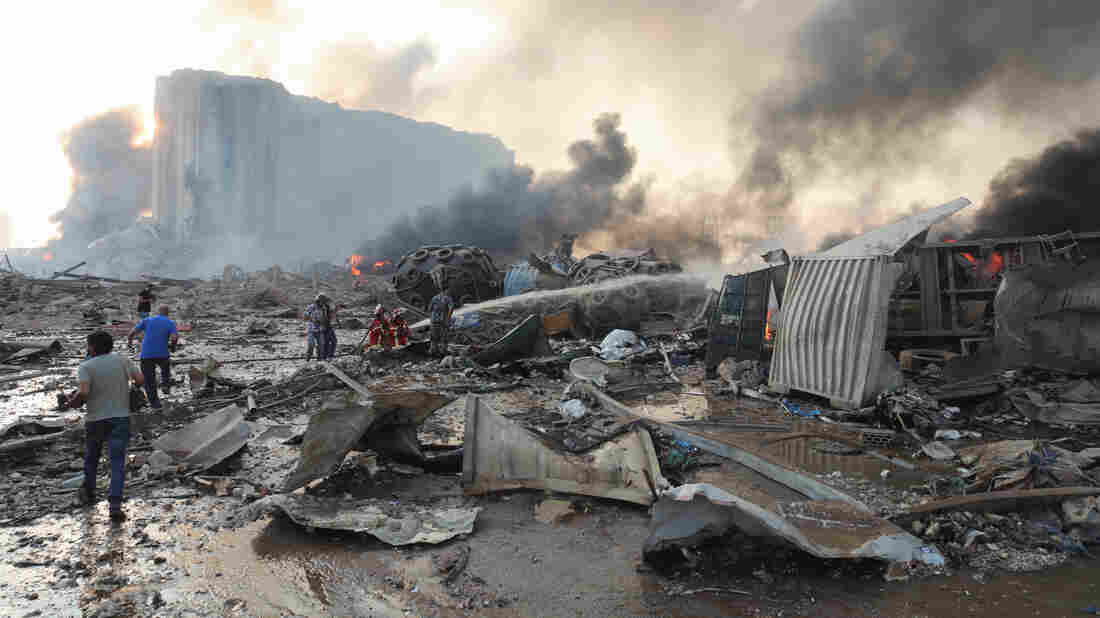 Firefighters extinguish flames at nearby damaged buildings following a large explosion at the Port of Beirut in Lebanon on Tuesday. Hasan Shaban/Bloomberg via Getty Images hide caption 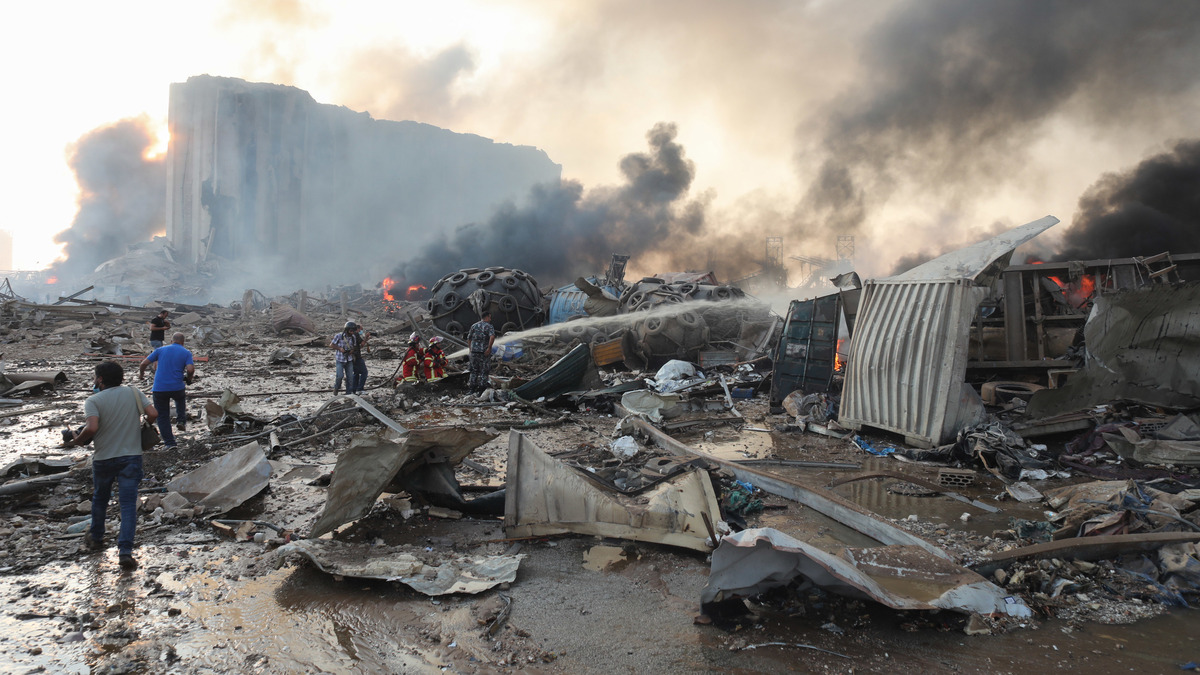 Firefighters extinguish flames at nearby damaged buildings following a large explosion at the Port of Beirut in Lebanon on Tuesday.

Prime Minister Diab said that the warehouse had been storing an estimated 2,750 tons of ammonium nitrate, according to an account by President Michel Aoun.

"Facts about this dangerous warehouse" have been known for at least six years, Diab said.

Images from the scene show entire blocks of buildings wrecked along the port, their structural supports crumpled by the blast. Numerous fires were started, sending black smoke into the sky.

The damage is so severe, according to LBCI Lebanon News, that military bulldozers had to clear roadways for firefighters and ambulances to reach the devastated area in the port.

Hours after the blast, numerous Beirut hospitals were still reportedly overwhelmed, and authorities were urging residents to donate blood.

The director of Beirut's Lebanese American University Medical Center-Rizk Hospital told state media that more than 400 people injured by the explosion had arrived at that medical center. He added that the hospital didn't have enough beds for all of them.

Photos from the aftermath show paramedics and emergency crews tending to people with a range of injuries.

Absolute chaos in #Beirut. Shattered shop fronts, injured people staggering around, alarms going off, ambulances trying to get to hospitals, the floor is glistening with shattered glass. In all my years of covering wars I have never experienced a blast like this. #Lebanon pic.twitter.com/znMLkOAzXB

Aoun is ordering Lebanon's armed forces to conduct patrols in affected parts of the capital and its suburbs to control security and to aid recovery efforts.

In addition to the casualties and structural damage, the explosion at Beirut's vital port threatens to deepen Lebanon's dire economic crisis. As journalist Habib Battah notes, the port handles billions of dollars' worth of imports, "including national wheat silos."

"Homes shattered for miles," Battah says. "Damage will be massive and could not come at worse time when everyone is broke and hungry."

Battah says his "whole body" was moved by the explosion's shock wave — despite being 10 miles away from the port.