Accessibility links
$1,200 Coronavirus Stimulus Checks Mistakenly Sent To Foreign Workers Overseas Thousands of foreign workers who entered the U.S. on temporary work visas received $1,200 pandemic stimulus checks in error, and many of them are spending the money in their home countries. 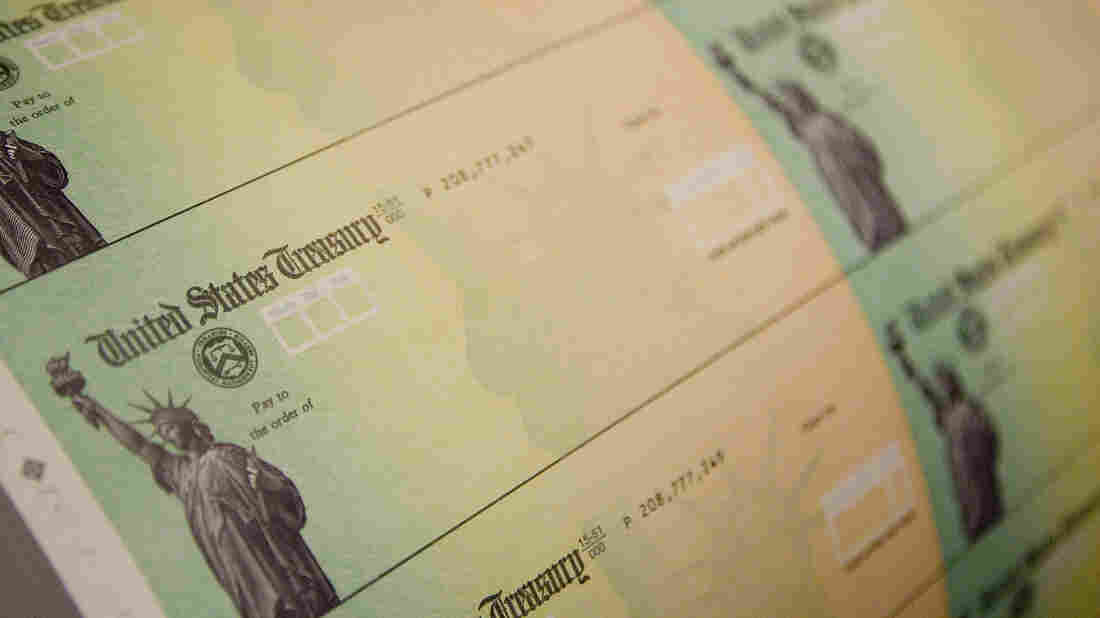 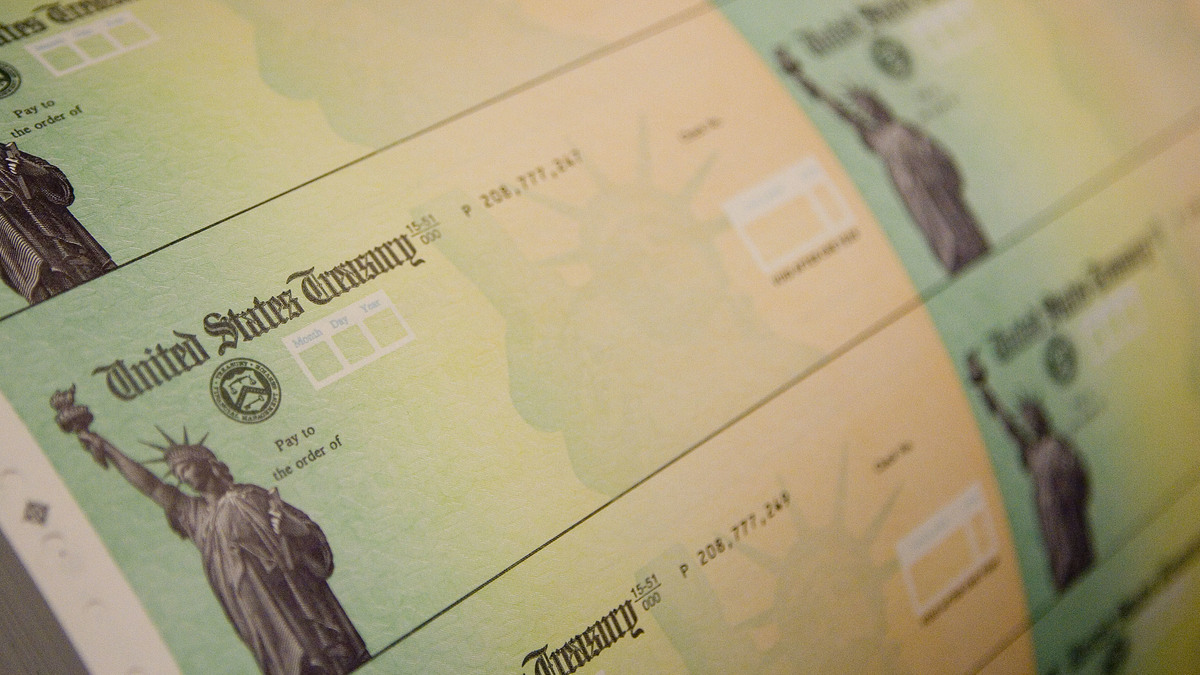 Stimulus checks are prepared on May 8, 2008, in Philadelphia. In 2020, stimulus checks again went to many Americans, this time during the pandemic's economic fallout. Some of that money went to thousands of foreign workers not eligible to receive the funds.

Thousands of foreign workers who entered the U.S. on temporary work visas received $1,200 checks in error during the first round of stimulus payments, and many of them are spending the money in their home nations. One tax preparation firm told NPR that it has clients from 129 countries who mistakenly received stimulus checks, including Brazil, Canada, China, India, Nigeria and South Korea.

Government officials and tax experts say the mistake happened because many foreign workers, whether unintentionally or on purpose, file incorrect tax returns that make them appear to be U.S. residents. Some of them are now trying to amend their returns because they worry that having mistakenly received a stimulus check will jeopardize their visa status, green card application or ability to return to the U.S.

How much stimulus money was mistakenly sent to foreign workers living overseas is difficult to quantify. But Sprintax, which does U.S. tax preparation for nonresidents, did about 400 amended returns last year for people who mistakenly filed as U.S. residents, and so far this year it has done 5,000 — almost 5% of the total federal tax returns it filed last year, according to the company. If just 5% of last year's more than 700,000 student and seasonal workers with F-1 and J-1 visas received a stimulus check in error, that would total $43 million.

The "economic impact payments" sent erroneously to non-U.S. citizens are the latest in a series of mishaps involving coronavirus relief efforts, including nearly $1.4 billion in stimulus checks sent to dead Americans. As Congress debates another pandemic relief package, it's considering a second round of payments that would exclude the deceased, but its new bill does not address the problem of $1,200 checks having mistakenly gone to foreign workers in other countries.

Many of those workers are college students, often from Eastern Europe and South and Central America, who travel to the United States for temporary and seasonal low-wage jobs such as waiters, lifeguards and hotel housekeepers at ski resorts, amusement parks and beach destinations. In a typical year, the U.S. issues work visas to several hundred thousand foreign students.

One of them is a 24-year-old citizen of the Dominican Republic who spent last summer working at a Cape Cod grocery store and this spring received a $1,200 stimulus check signed by President Donald J. Trump.

"I was really surprised because I was not expecting that money," the man told NPR, which agreed not to identify him because he is concerned that receiving the check could put him at odds with the U.S. government.

"I don't want ... any problems," added the man, whose former Cape Cod landlord received the check and sent it to him in the Dominican Republic. "If they say that we have to return it, I will return it. It is not a problem."

He said numerous foreign student workers he knows have also received stimulus checks, including people in Bulgaria, Colombia, Jamaica and Montenegro. Sometimes the checks were directly deposited into bank accounts on file with the IRS. Sometimes the checks were mailed to their former U.S. addresses and forwarded to them. And some checks could have been mailed to them directly overseas.

The payments were intended to stimulate the U.S. economy by giving consumers spending money, but this Dominican man is not able to work on Cape Cod this summer because the Trump administration's freeze on foreign work visas has prevented seasonal workers from coming to the U.S. — so he'll be spending his stimulus payment in his own country.

"This money, to be honest, is a big help," he said, "because we can buy food, we can pay the cable services, and we also can pay the university," referring to a school in the Dominican Republic where he takes online classes.

Only U.S. citizens and U.S. "resident aliens" are eligible for stimulus money, but the Dominican man interviewed by NPR and some of his friends do not meet that eligibility standard. A "resident alien" is a federal tax classification, and to qualify for it an individual needs a green card or must have been in the U.S. for a certain amount of time.

The U.S. government acknowledges that some stimulus checks were improperly sent to foreign workers and told NPR that the Treasury Department is "exploring possible options" to prevent that from happening again.

Most foreign workers should file a form 1040-NR — the NR stands for nonresident — but instead mistakenly file a 1040, the form most commonly used by individual U.S. taxpayers, according to Georgia attorney Clayton Cartwright, who specializes in immigration tax law and has a background in accounting. 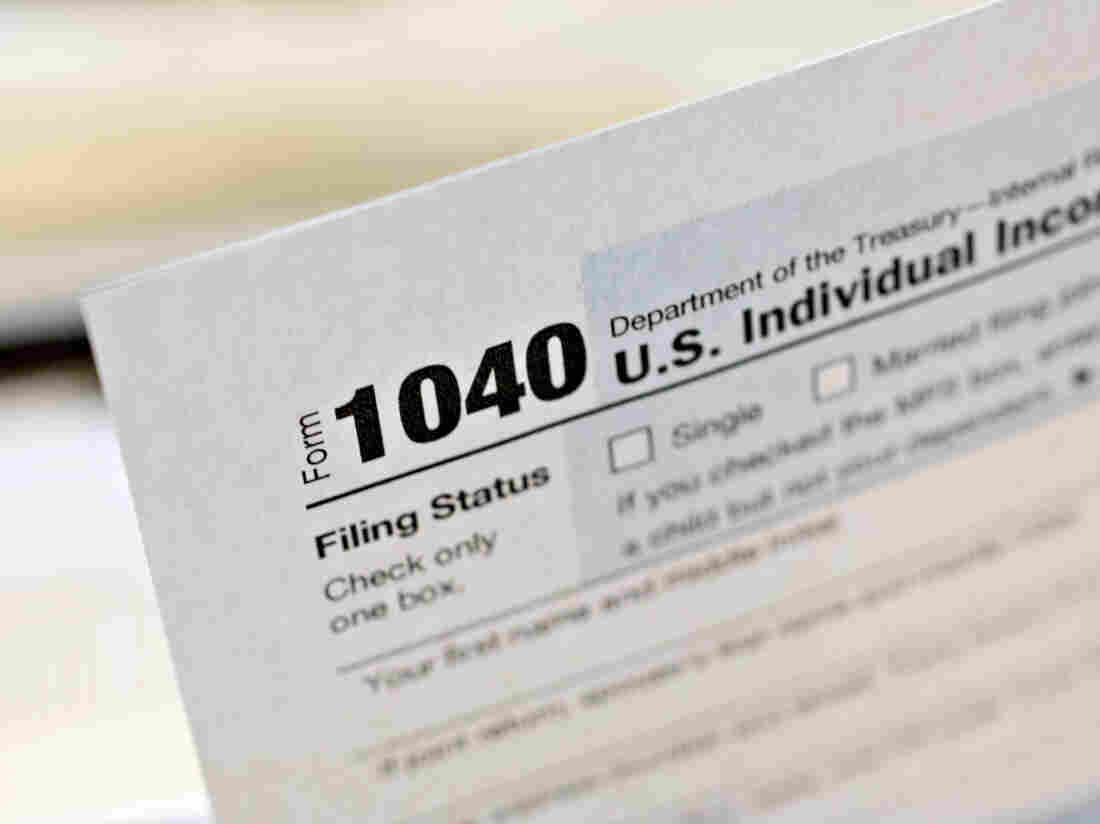 Thousands of foreign workers mistakenly received economic stimulus checks from the U.S. government, likely because many filled out an IRS 1040 tax form instead of a nonresident 1040-NR form. Daniel Acker/Bloomberg via Getty Images hide caption 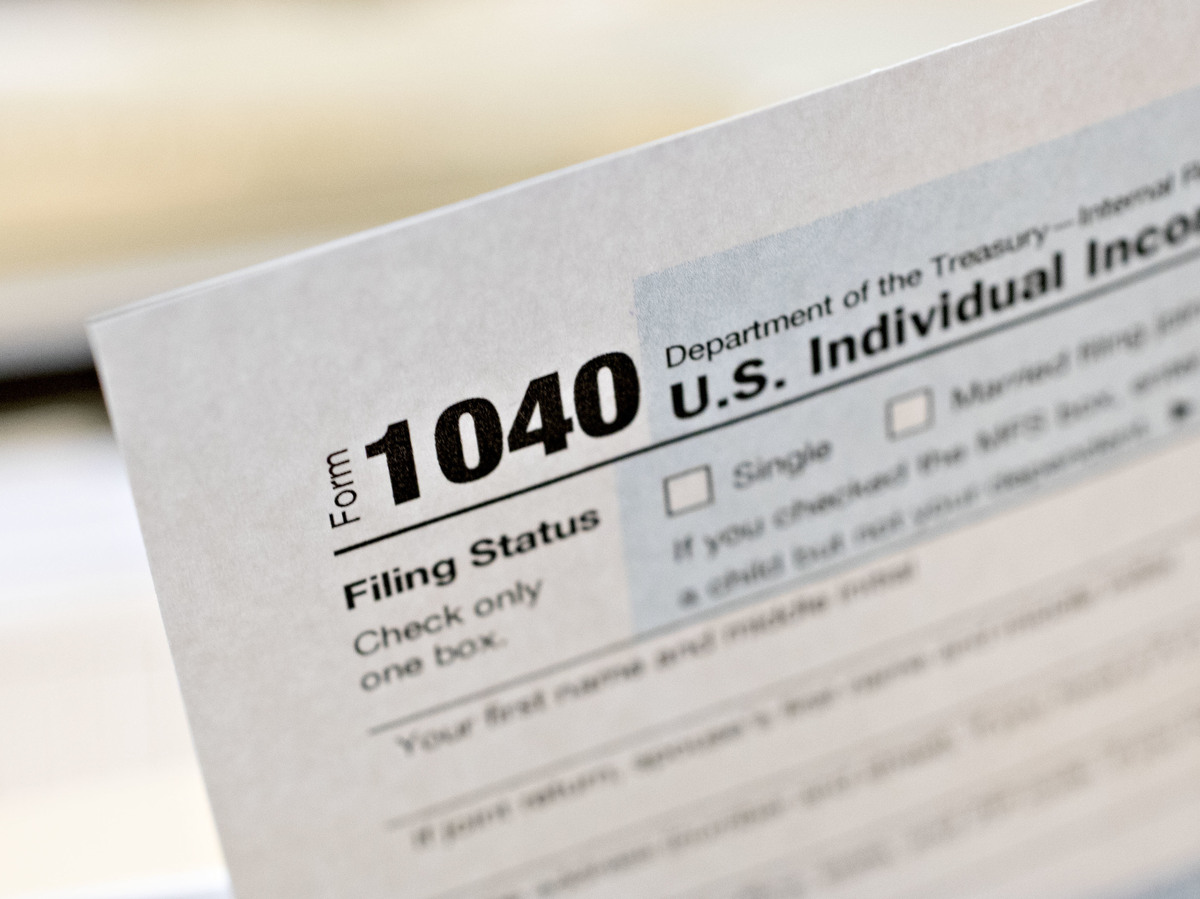 Thousands of foreign workers mistakenly received economic stimulus checks from the U.S. government, likely because many filled out an IRS 1040 tax form instead of a nonresident 1040-NR form.

"I would say probably anywhere to a third to a half [of first-time foreign filers] are filing the wrong return," especially if they use e-filing software such as TurboTax that is intended only for U.S. residents, Cartwright said.

When foreign workers file the wrong form, "I don't know if the IRS would even be able to tell," he added. "I mean, they have no way of knowing. You don't mark on your [Form 1040] tax return whether you're a citizen."

If a foreign worker files an incorrect tax form and also has a U.S. address, a bank account on file with the IRS, and a Social Security number — as many foreigners with work visas do — that increases the likelihood that the IRS would mistakenly mail them a stimulus check, he said.

Some foreign workers did not realize they had filed incorrect tax forms until they received a stimulus check in error this spring, and they are now scrambling to amend their returns, said Sprintax's vice president, Enda Kelleher.

"We saw a huge number of people contacting us after the first stimulus payment because they said, 'Hey, I got this check. I never asked for it, I didn't think I was entitled to it, and how can I correct it?'" he said.

"It's a serious issue," he added, noting that in a recent Sprintax survey of more than 500 schools, 43% reported they had students or scholars who think they received stimulus checks in error. As a result, many schools "believe it's a significant problem," he said.

"It doesn't surprise me that that would have happened," said Cartwright, the Georgia attorney. "Now, does that make good policy sense? Probably not."

Cartwright said Congress was in "panic mode" in March as the U.S. economy was shutting down over the pandemic, so it rushed stimulus funding out the door. "You know — damn the torpedoes, full steam ahead. We've got to get the money out," he added. "So they just do it and just live with the consequences," including unintended ones.

"That is spillage," Cartwright said of the money that accidentally leaked overseas as Congress tried to flood the U.S. economy with stimulus money. "I don't mean to sound flip or cavalier, but it's spillage."

The IRS says non-U.S. residents who received stimulus money in error should return it. But Kelleher anticipates that if additional stimulus payments are distributed, some foreign workers who tried to send back their first mistaken check will get a second one.