Accessibility links
A Year After Toni Morrison's Death, Her Visions Of Love Stay With Us Love is central to the work of Toni Morrison — she brought love to her examinations of Black life, and love itself was her enduring subject. But love isn't always a good or joyous thing in her work.

A Year After Toni Morrison's Death, Her Visions Of Love Stay With Us

A Year After Toni Morrison's Death, Her Visions Of Love Stay With Us 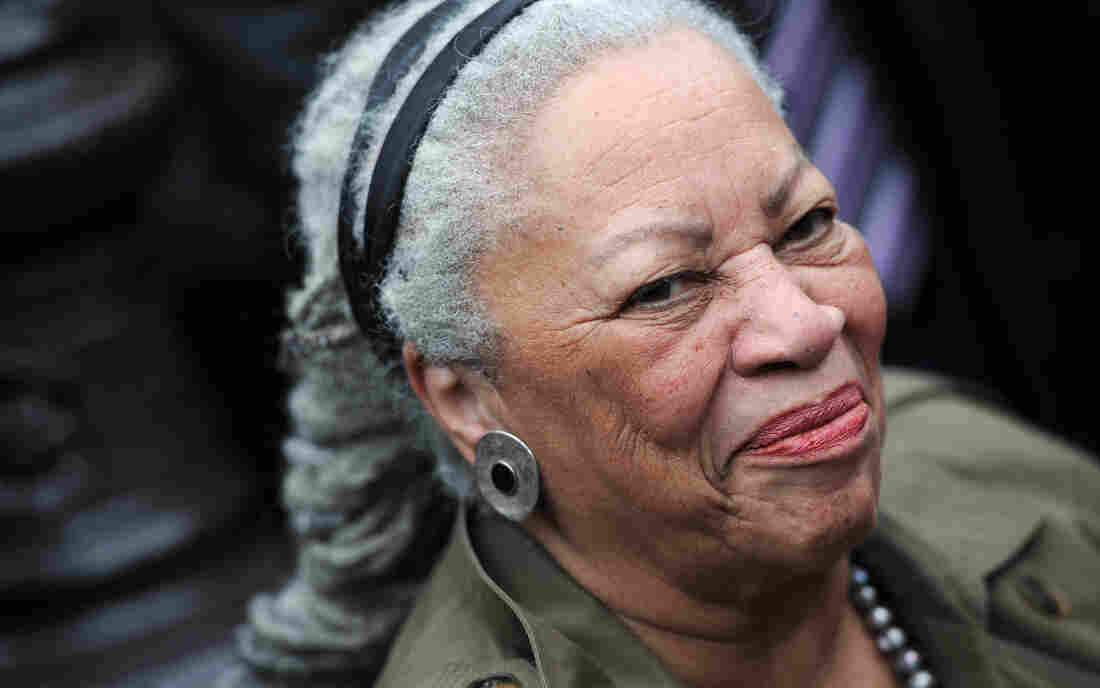 Novelist Toni Morrison, seen at the unveiling ceremony of a memorial bench marking the abolition of slavery in Paris in 2010. FRANCK FIFE/AFP via Getty Images hide caption 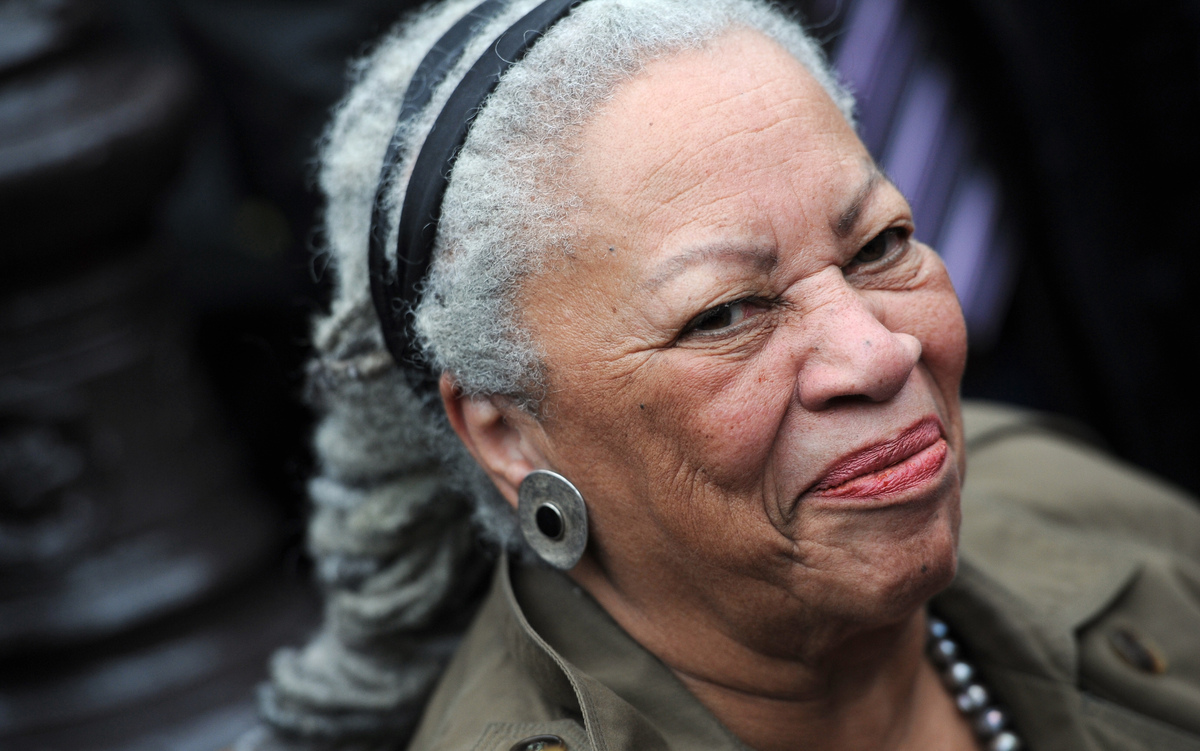 Novelist Toni Morrison, seen at the unveiling ceremony of a memorial bench marking the abolition of slavery in Paris in 2010.

I've been thinking a lot about love lately. How the pandemic has forced us away from friends, families and significant others, forced us to make compromises in when and how we see each other. What does love mean under such perilous conditions? How does it actually work?

In thinking about love, I've also thought about Toni Morrison. As we mark a year since her death, I've thought about how that word defined her work above all else.

Through Toni Morrison, I first found a love for language, not only for how it's written, but how it's spoken. Think of her opening line in the 1992 novel Jazz: "Sth, I know that woman."

I remember the tiny thrill I got when I tried to say this word I'd never seen before, and realized the speaker was sucking her teeth. The onomatopoeia conjured a world of neighborhood gossip and intrigue that felt distinctly Black.

Toni Morrison wrote about love, in the way William Faulkner wrote about the past's insistence on the present, or Cormac McCarthy writes about violence as a primordial and unifying social force.

Blackness, of course, was also her subject. The love she brought to illuminating its limitless shadings and riches changed the face of American literature and has continued to inspire generations of writers.

But Toni Morrison also wrote about love, in the way William Faulkner wrote about the past's insistence on the present, or Cormac McCarthy writes about violence as a primordial and unifying social force. If Morrison's subject seems trite next to those, it is only because popular culture often reduces love to a Hallmark sentiment, a teary confession at the end of a rom-com. Morrison aspired to something deeper and more complicated.

Consider the penultimate paragraph of her debut, The Bluest Eye, which turns 50 this year:

Love is never any better than the lover. Wicked people love wickedly, violent people love violently, weak people love weakly, stupid people love stupidly, but the love of a free man is never safe. There is no gift for the beloved. The lover alone possesses his gift of love. The loved one is shorn, neutralized, frozen in the glare of the lover's inward eye.

Even taken out of context, the passage carries the wisdom and authority of experience that came to define the best of Toni Morrison's work. But considered within the narrative of the novel, it terrifies. By now, readers know all that befalls one of its protagonists, Pecola Breedlove, an 11-year old girl wilted by trauma. Shunned by almost everyone around her, including her own family, she retreats into herself, dreaming only of her desire for blue eyes. Her mother Polly takes her self-loathing out on Pecola, believing her to be ugly and unworthy of love, because in 1940s America it seems like there's nothing and no one to contradict her.

But what sparks the narrator's observation on love comes from what her father Cholly does, Cholly who has known only abandonment and violation. And in the ultimate act of violation, Cholly rapes and impregnates Pecola, which drives her to madness.

What does it mean to give or withhold love, what power do we grant it, how does it change us, and in what discomforting ways might it manifest?

Toni Morrison doesn't equate rape with love. But she understands the way people can hold their own twisted views on what love means. And her narrator's insight speaks to a fascination on the subject that I find throughout her work, a fascination that's stunningly kaleidoscopic: What does it mean to give or withhold love, what power do we grant it, how does it change us, and in what discomforting ways might it manifest?

I'm reminded of Joe Trace, the adulterer in Jazz who shoots and kills his mistress. How he suffered from "one of those deep-down, spooky loves that made him so sad and happy he shot her just to keep the feeling going." Or of her 2003 book Love, which took the word both as its title and as its main subject. Throughout, characters often confuse it with other things, like infatuation or lust. Only one relationship feels pure, the rivalry between two women obsessed with the same man. They spend most of their adult lives tormenting each other, but the book also reveals the deep bond they formed in childhood. And so love becomes a motivator for hate. Perhaps inseparable from it.

Nowhere else did Morrison better challenge the readers' understanding of love than in Beloved, her 1987 Pulitzer Prize winner. The dominating image at its center has by now attained iconic potency: Sethe, a runaway slave, capture imminent, chooses to slit her infant daughter's throat rather than see her in chains.

Morrison forces readers to measure the awfulness of that crime against the greater horrors of slavery. Beloved lays bare all the ways that the institution robs you of your body and mind, the ways, both literally and emotionally, it will rob you of family, and how even escape does not necessarily mean survival. Knowing that, might anyone spare their own children such a fate?

"It was absolutely the right thing to do, but she had no right to do it," Morrison said in an interview with the The New York Times.

The seeming contradiction in that statement lies at the heart of Beloved, which justifies Sethe's actions without ever forgiving them. I remember the many black bodies in Beloved — either muzzled, mutilated, burned, or hanged — but I also think of how Sethe's daughter had no say in how her mother would express her love. Here, as in The Bluest Eye, there was no gift for the beloved.

Because Morrison can so deeply unsettle us when she writes of love as a destructive force, she can also move us when it can soothe and heal.

Because Morrison can so deeply unsettle us when she writes of love as a destructive force, she can also move us when it can soothe and heal. As in 1977's Song of Solomon, an ode to attaining self-hood, even transcendence, through the origins and bonds of family, the title itself derived from (what else) a biblical love story.

Or when the matriarch of Beloved, Baby Suggs, gathers a group of black people and instructs them to love every inch of their flesh: "Love it hard. Yonder they do not love your flesh. They despise it," she says. Here, love, self-love, not only has value. It has stakes.

I've been thinking about the stakes this pandemic has put on love. The love that we can maintain or strengthen, for ourselves and others, feels more vital than ever. But in such uncertain times, the idea of loving someone else, surrendering our thoughts and feelings to another, also feels risky. Might not time apart, time under duress, or the virus itself make a mockery of that love?

So I will be turning to Toni Morrison for guidance and comfort. She understood those risks, love's perils as well as its joys. And she understood our need for love, the kind that can help see us through hard times. Such an understanding feels like an act of love unto itself.

Marc Rivers is a production assistant for Morning Edition and Up First.