Accessibility links
At Site Of Razed Mosque, India's Modi Lays Foundation For Controversial Hindu Temple The 1992 destruction of the Babri mosque in Ayodhya by Hindu extremists sparked riots that killed thousands of Muslims, leaving a deep rift between the country's religious communities. 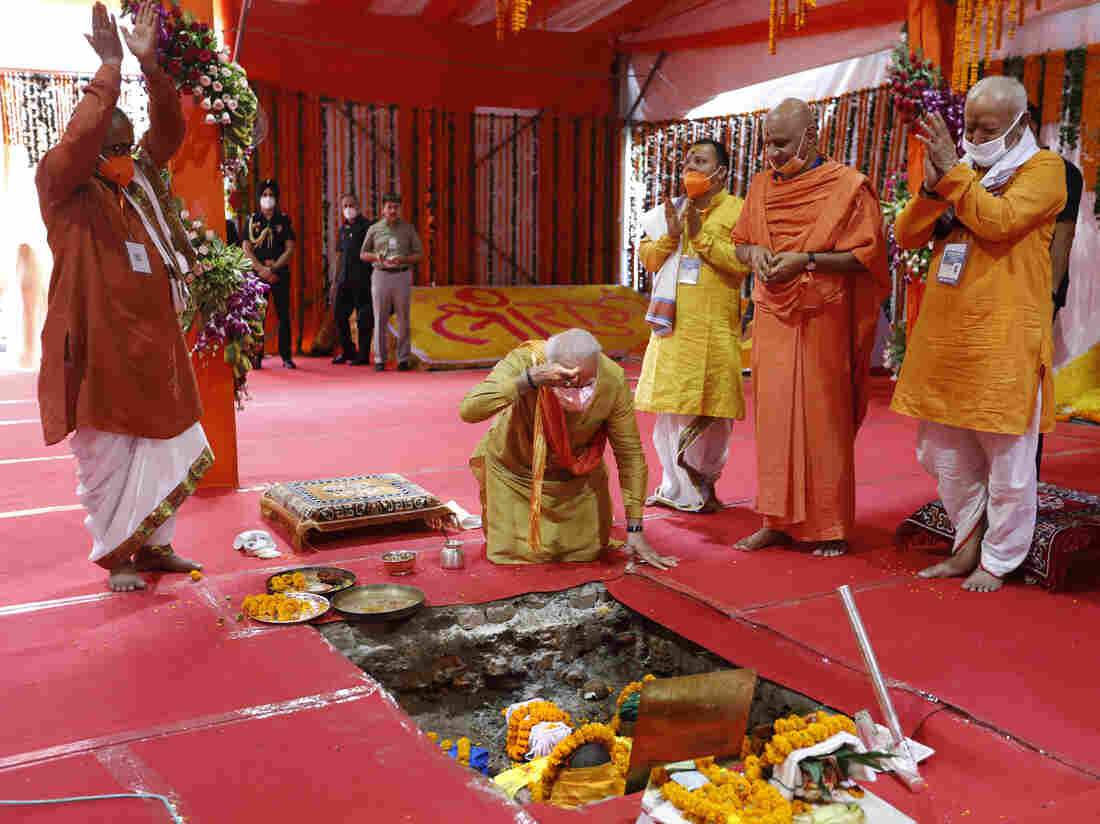 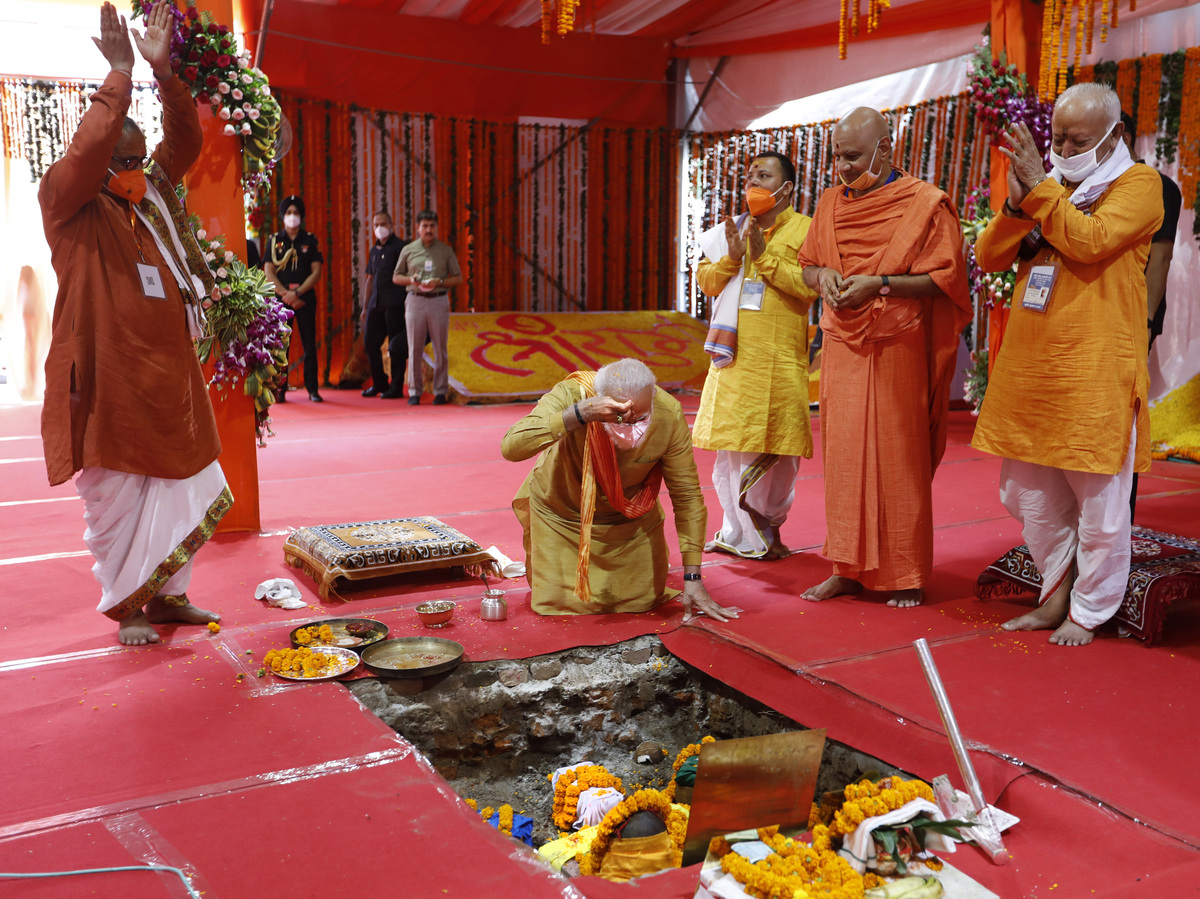 Nearly 30 years ago, Hindu extremists armed with pickaxes tore down a 16th-century mosque in the northern Indian town of Ayodhya, sparking riots that killed thousands of Muslims.

On Wednesday, Indian Prime Minister Narendra Modi fulfilled a campaign promise to his Hindu nationalist base by laying the cornerstones of a grand Hindu shrine on that very same spot. The ceremony coincides with the first anniversary of India's revocation of special rights in Kashmir, its only Muslim-majority state.

Under Modi, both Ayodhya and Kashmir have become symbols of Hindu nationalist dominance over India, despite the secularism enshrined in its constitution — and a painful affront to the country's Muslims. About 1 in 6 Indians is Muslim; they're the country's largest religious minority and one of the largest Muslim communities in the world.

While Hindu priests chanted mantras, Modi sat cross-legged Wednesday on the ground in Ayodhya, surrounded by saffron garlands, and prayed over nine bricks that are to form the foundation of the new temple. The bricks were engraved with the words "Jai Shri Ram" — Praise Lord Ram — in Hindi. Hindu faithful believe one of their gods, Lord Ram, was born on the exact spot where the mosque once stood.

"All of India is emotional. Centuries of waiting are finally over today," Modi told a small crowd, before departing by helicopter. It was one of his few trips out of the capital since the start of the COVID-19 pandemic.

India ranks third globally, behind the U.S. and Brazil, in recorded coronavirus infections. Last week, a priest and 15 police officers in Ayodhya tested positive for the virus. Fewer than 200 dignitaries attended Wednesday's ceremony — many of them without masks — but millions more followed it online and on TV.

Renu Gupta, 63, threw a small party at her Cincinnati home.

"We have an idol of Ram and a photo of the temple — how it'll look [once it's built]. We're offering sweets and flowers and reciting some prayers around them," Gupta says. "This is a very proud moment for us." 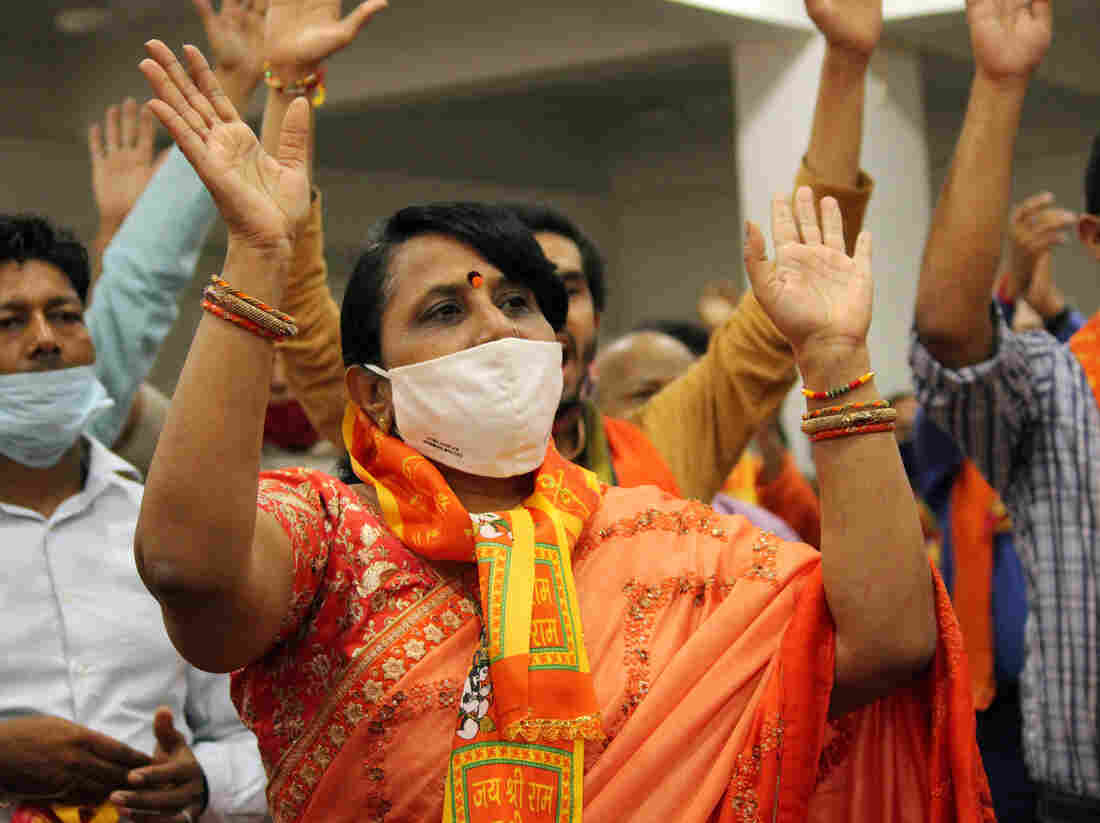 People in New Delhi on Wednesday watch a live telecast of Modi's participation in a bhoomi pujan, or groundbreaking ceremony, to mark the building of a Hindu temple in Ayodhya. Mayank Makhija/NurPhoto via Getty Images hide caption 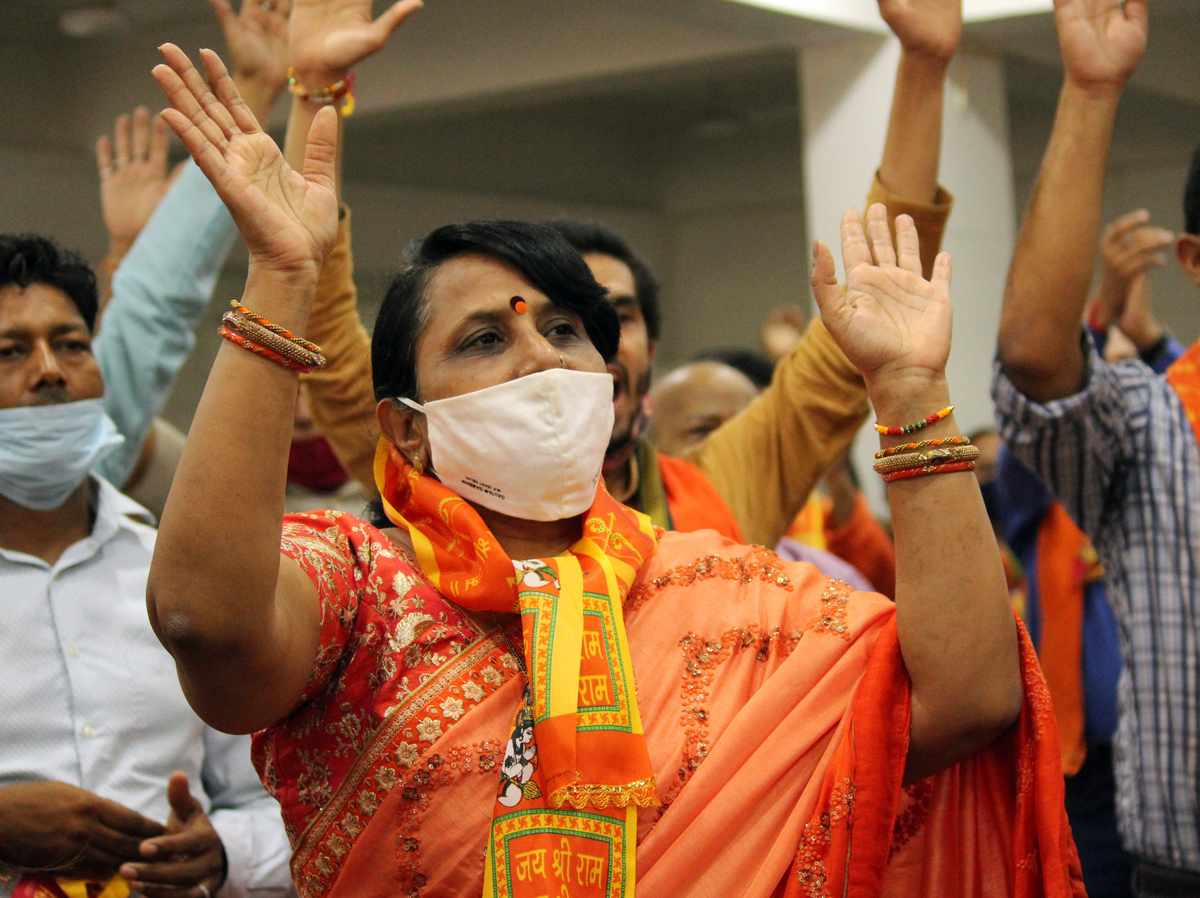 People in New Delhi on Wednesday watch a live telecast of Modi's participation in a bhoomi pujan, or groundbreaking ceremony, to mark the building of a Hindu temple in Ayodhya.

Many Hindus believe an earlier Hindu temple to Lord Ram in Ayodhya was destroyed by Muslim emperors who ruled much of India from the 16th to 19th centuries, though archaeologists are divided. Some Hindus consider those centuries of Muslim rule as an occupation, after which Hindu sacred spaces must be reclaimed.

In 1992, Hindu hard-liners — many of them members of Modi's Bharatiya Janata Party — destroyed the 16th-century Babri Masjid, or Babri mosque, erected in Ayodhya by India's first Muslim emperor. They razed Muslim homes around the sanctuary, beating to death hundreds of residents. Hindu-Muslim riots spread across South Asia.

"The word 'Ayodhya' brings back haunting memories. When the Babri Masjid was demolished, it was when for your next-door neighbors, for your schoolmates, you became a Muslim overnight," says author and activist Rana Ayyub, who was 9 years old in 1992 and had to go into hiding amid Hindu-Muslim riots in her native Bombay, now Mumbai. "It ripped apart the facade of India being a secular nation, a democratic republic."

India's constitution defines it as a secular republic, but Modi and his BJP have sought to transform the country into a Hindu nation with special rights for members of its majority faith. In recent years, minority Muslims have increasingly become victims of hate crimes and lynchings.

A legal battle over the land under the Babri mosque's ruins spanned more than a century. Last year, India's Supreme Court handed over the disputed 2.77-acre patch of land to the Hindu litigants in a unanimous verdict. The court also ordered 5 acres of land to be allocated to Muslims, at a separate location in Ayodhya.

While most of the Muslim litigants accepted the ruling, some filed for a review. But their appeals were dismissed by the court.

"Babri Masjid was and will always be a Masjid," the All India Muslim Personal Law Board, which had filed a review petition, tweeted late Tuesday. "Usurpation of the land by an unjust, oppressive, shameful and majority appeasing judgment can't change its status."

While construction of a Ram temple at Ayodhya began as a rallying cry by right-wing Hindu nationalists, many Indian politicians from across the political spectrum expressed support Wednesday for Modi's project. Priyanka Gandhi, scion of India's Congress party, a political dynasty opposed to Modi's BJP, tweeted that she hoped the Ram temple would become "an occasion for national unity, brotherhood and cultural integration."

In Kashmir, a Muslim-majority valley high in the Himalayas, Indian troops lined the streets with barbed wire Wednesday and imposed a strict curfew. Police said they had intelligence that Pakistani-backed separatists were planning protests. Some local politicians have been under house arrest for a year. Human Rights Watch says India continues to infringe upon Kashmiris' right to free speech, communication and health care during the pandemic.

On Aug. 5, 2019, Modi's government revoked Article 370 of India's constitution, which laid out special rights to property and government jobs for native Kashmiris. Indian officials said they did so to better integrate Kashmir into the rest of India. But many Kashmiris fear the constitutional change may lead to an influx of outsiders, diluting their Muslim majority in the region.

The timing of Modi's visit to Ayodhya, on the Kashmir anniversary, is "deeply symbolic," says Pragya Tiwari, a writer with roots near Ayodhya who grew up spending summers there.

"What is being founded on the 5th August in Ayodhya is not merely a Ram temple but a new republic which is going to stand on the remnants of constitutional democracy in India," she said.

While Modi laid the cornerstones of the temple Wednesday, its construction is expected to last more than three years.