Accessibility links
Colombia's Ex-President Uribe Is Put Under House Arrest, Catches Coronavirus The Supreme Court orders house arrest as it investigates whether he had a role in a scheme to bribe witnesses in a case involving right-wing paramilitary death squads. 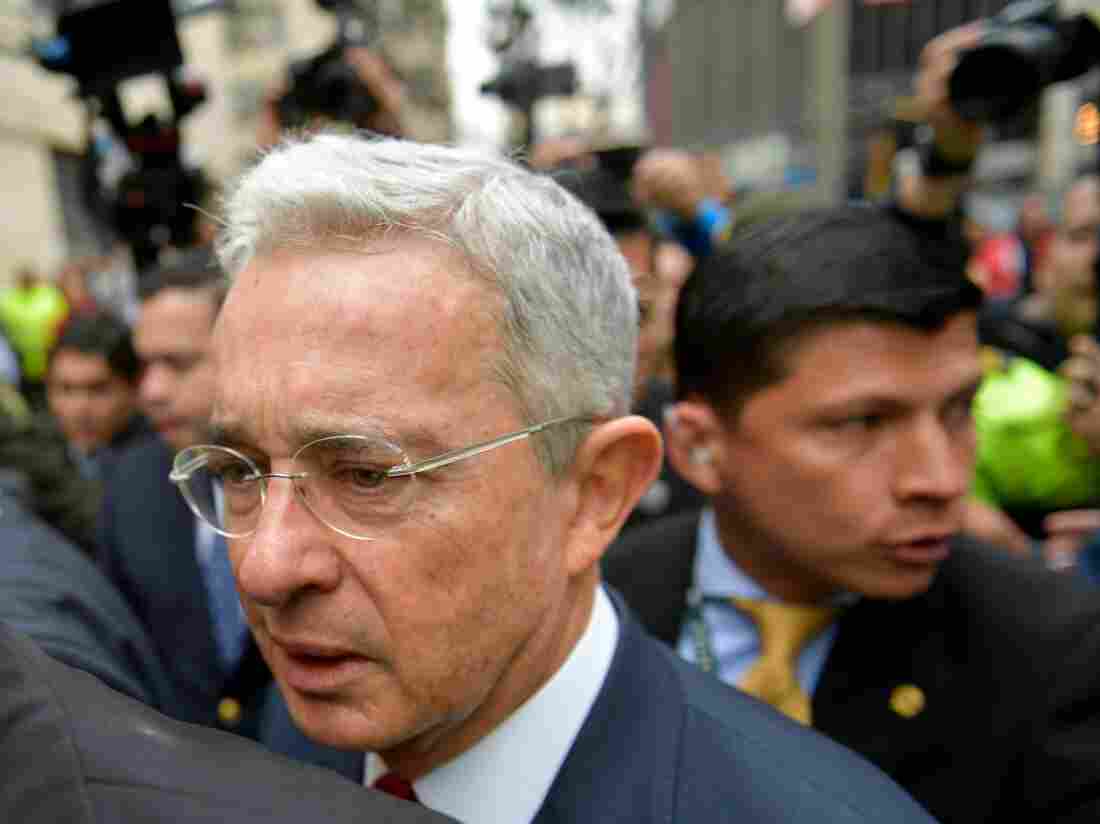 Former Colombian President (2002-2010) and Sen. Álvaro Uribe goes to a hearing before the Supreme Court of Justice in a case over witness tampering in Bogotá, Colombia, on Oct. 8, 2019. The Supreme Court has now ordered Uribe be put under house arrest. Raul Arboleda/AFP via Getty Images hide caption 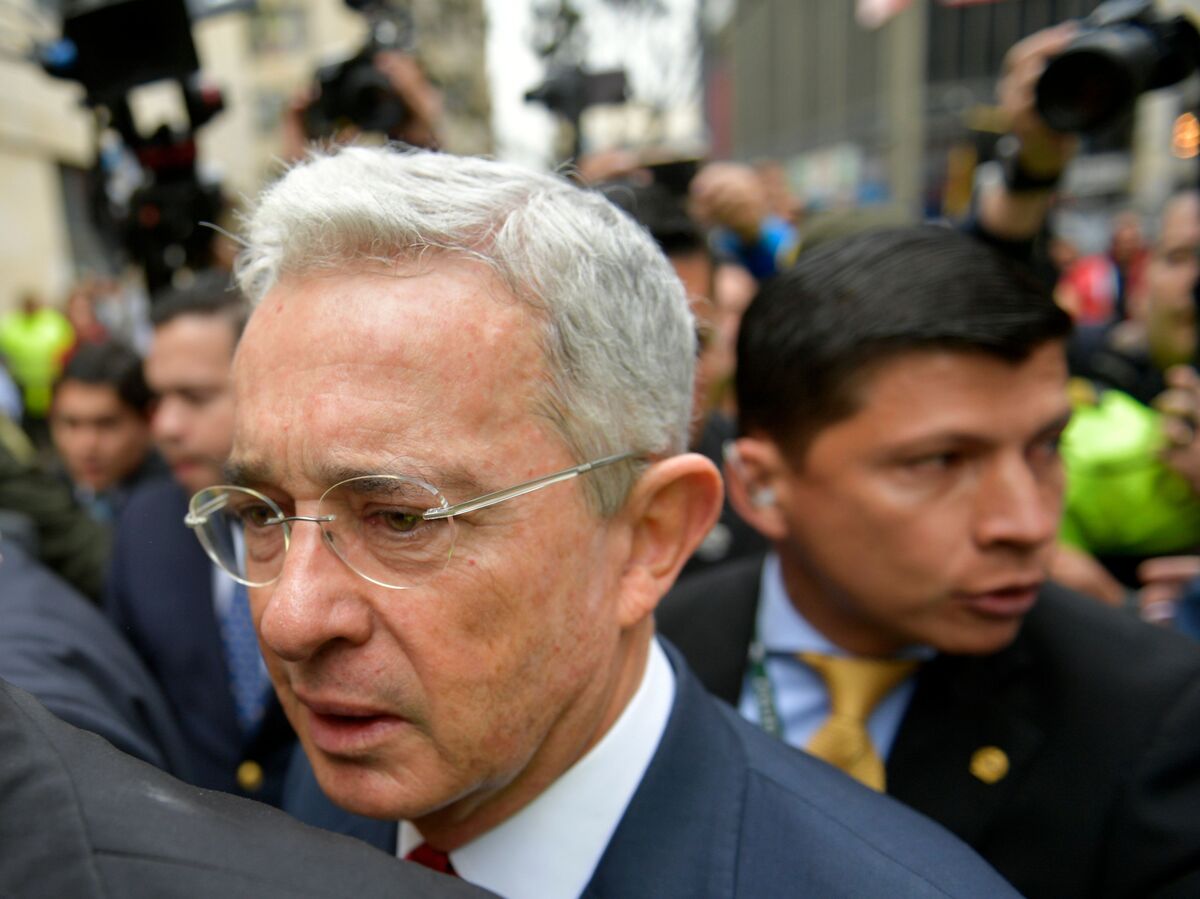 Former Colombian President (2002-2010) and Sen. Álvaro Uribe goes to a hearing before the Supreme Court of Justice in a case over witness tampering in Bogotá, Colombia, on Oct. 8, 2019. The Supreme Court has now ordered Uribe be put under house arrest.

It's been a rough two days for former Colombian President Álvaro Uribe, one of the country's most influential politicians.

Uribe has gone from kingmaker to detainee after the country's Supreme Court on Tuesday ordered that he be placed under house arrest. Then, on Wednesday, Colombian media reported that he had tested positive for the coronavirus.

The surprising court decision, which the Bogotá newspaper El Tiempo described as "colossally important," came as the court investigates whether Uribe had a role in a scheme to bribe witnesses in a convoluted legal case involving former members of right-wing paramilitary death squads. One of Uribe's lawyers, Jaime Granados, insisted that his client is innocent.

"Uribe has played a central role in Colombia over the past 20 years, and has greatly determined who holds power," said Sergio Guzmán, director of the Bogotá consultancy Colombia Risk Analysis. "This is why it is such a significant case."

Uribe's allies were outraged by the court's ruling.

Sen. Paloma Valencia of the ruling Democratic Center party, which Uribe founded, called for an overhaul of the judicial system. Some motorists drove around Bogotá Tuesday night holding up banners declaring their allegiance Uribe. Dario Acevedo, head of the government-run National Center for Historical Memory, called for the Colombian flag to be flown at half-staff.

Uribe's followers "really believe that he is the greatest Colombian to walk on Colombian soil," said Poly Martínez, a columnist for the Colombian newsmagazine Semana.

Uribe's support stems from his two terms as president from 2002 to 2010, when he carried out a U.S.-backed military offensive that badly weakened the Marxist rebel group, the Revolutionary Armed Forces of Colombia, known as the FARC. Improved security led to more foreign investment, tourism and economic growth and turned Uribe into a hero for many Colombians.

Uribe tried to change Colombia's constitution so he could run for a third term. Though his amendment drive failed, his endorsements helped elect the next two Colombian presidents. Uribe won a senate seat in 2014 and was reelected in 2018 with more votes than any other legislative candidate.

But Martínez and other critics describe a large and lingering dark side to Uribe's legacy.

During his presidency, army troops killed thousands of innocent civilians, then claimed they were guerrilla fighters in order to win promotions and other benefits. Under Uribe's watch, intelligence agents at the Administrative Department of Security, known as DAS, spied on journalists, opposition leaders and Supreme Court judges, a scandal that led to the dissolving of the agency after Uribe left office.

His current legal troubles date back to 2012.

That's when opposition Sen. Iván Cepeda began gathering testimony about Uribe's alleged support for illegal paramilitary groups that carried out massive human rights abuses as they battled against the guerrillas. Uribe responded by accusing Cepeda of pressuring imprisoned paramilitary fighters to testify against him.

But in a bizarre twist in 2018, the Supreme Court — which has jurisdiction over cases involving former presidents — exonerated Cepeda and began investigating Uribe for witness tampering. The court is trying determine whether another one of Uribe's lawyers, with his consent, paid imprisoned paramilitaries to give testimony favoring the ex-president.

"The evidence against Uribe must be pretty solid for the Supreme Court to take this step," Guzmán said.

Uribe has not been charged with a crime. When he learned of the house arrest warrant, which he will serve at his ranch in northern Colombia, he tweeted: "The loss of my freedom causes me deep sadness for my wife, for my family and for Colombians who still believe I did something good for the fatherland."

The following day, a Democratic Center spokesman told reporters that Uribe had the coronavirus but has not showed any symptoms.

Current President Iván Duque, who was elected in 2018 after Uribe endorsed him, went on national television to insist that his political mentor is a "genuine patriot" and an innocent man who has faced numerous false and unjust accusations.

Duque and other Uribe supporters are especially bitter that the former president, if found guilty, could face up to 12 years behind bars, while the FARC commanders Uribe spent his presidency trying to defeat have avoided prison even though they carried out thousands of kidnappings and killings and were deeply involved in cocaine trafficking.

In fact, under the generous terms of Colombia's 2016 peace deal that led to the demobilization of the rebel group, five former FARC members now serve in the senate while Uribe, due to his house arrest, has been suspended from the legislative body.

"It pains me as a Colombian that many of those who have lacerated the country with barbarism can defend themselves in freedom and have a guarantee that they will never go to prison," Duque said.

But José Miguel Vivanco, the Americas director for Human Rights Watch, warned Duque not to undermine Tuesday's ruling, which stood out in Latin America, where judges often side with ruling parties in high-profile cases.

"Uribe's house arrest is the most critical stress test for the rule of law in Colombia in the last decade," Vivanco said. "The Duque administration and the ruling party need to respect the court's decision and independence by ensuring that President Uribe defends himself through the legal process, not through threats of judicial reform and groundless accusations."

For his part, Cepeda, the opposition senator whose investigation eight years ago set off the chain of events that led to Uribe's house arrest, was elated. He told a news conference that the court's decision shows that "no matter how powerful you are, no one is above the law."