Accessibility links
How Hair Strands Make Razor Blades Chip And Crack Hair is soft compared with steel, but shaving can dull a razor surprisingly quickly. A new study examines exactly how a strand of hair can chip and crack a sharp blade. 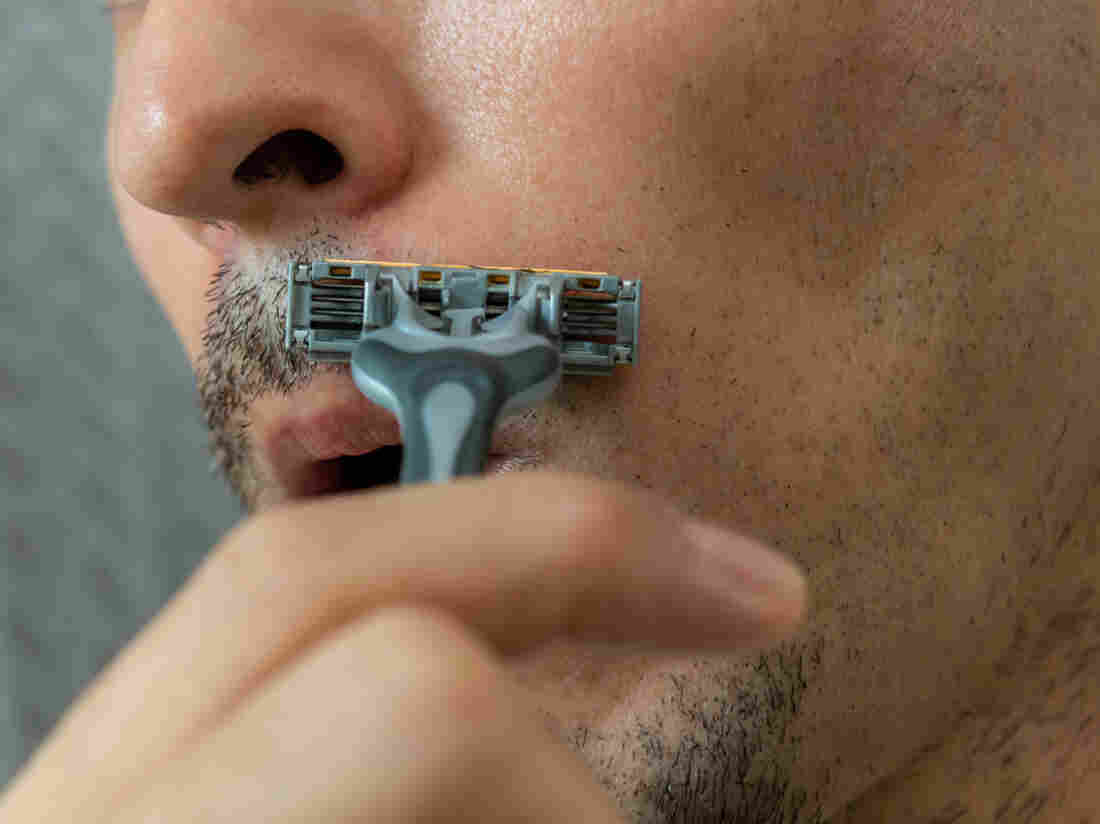 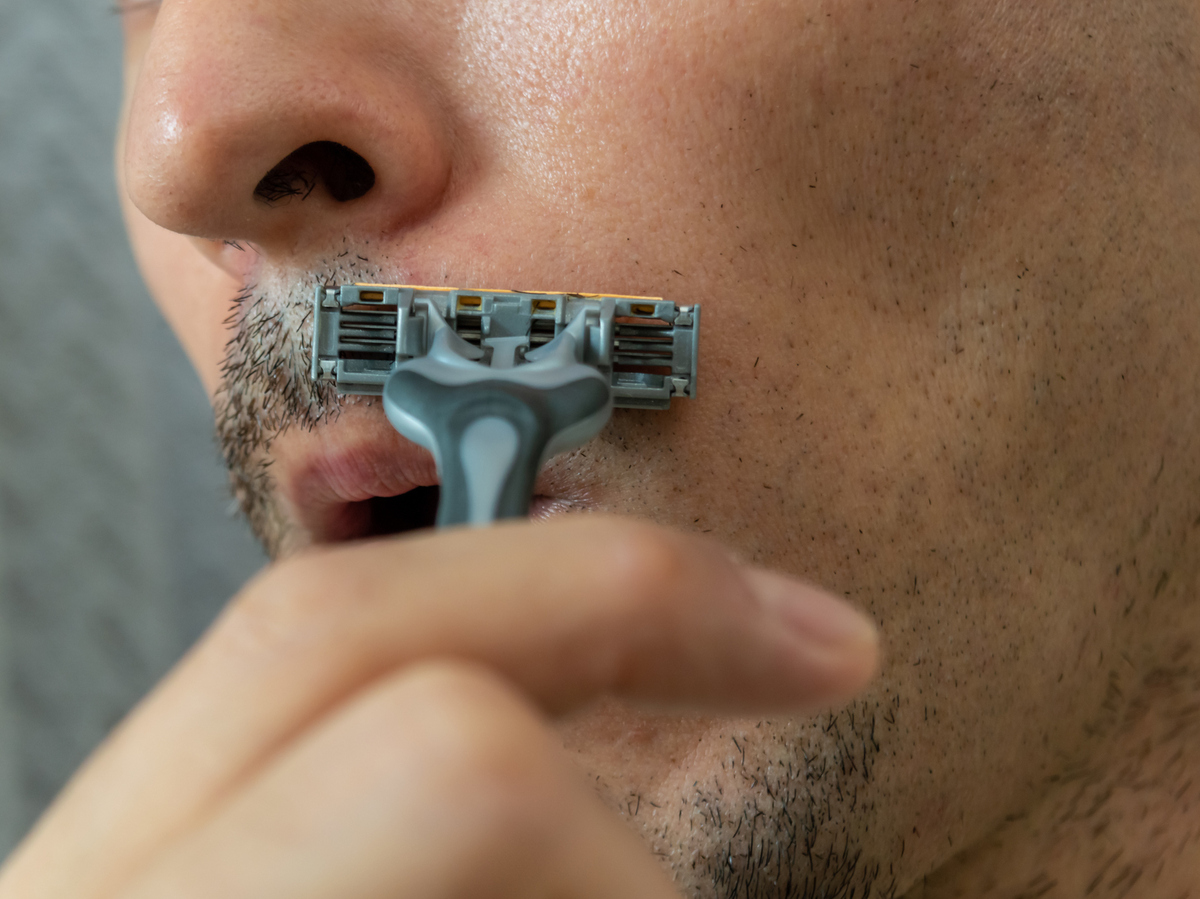 Researchers uncover why shaving can cause sharp blades to dull quickly.

A steel razor blade can get dull surprisingly quickly when cutting something as soft as hair, and now researchers have gotten their first up-close look at how a close shave actually damages an everyday disposable razor.

This leading-edge research, described in the journal Science, used a scanning electron microscope to peer at a razor as it sliced through strands of hair.

It found that, under the right conditions, a hair can produce tiny chips in the blade. That was unexpected, says Cemal Cem Tasan, a professor of metallurgy at the Massachusetts Institute of Technology. 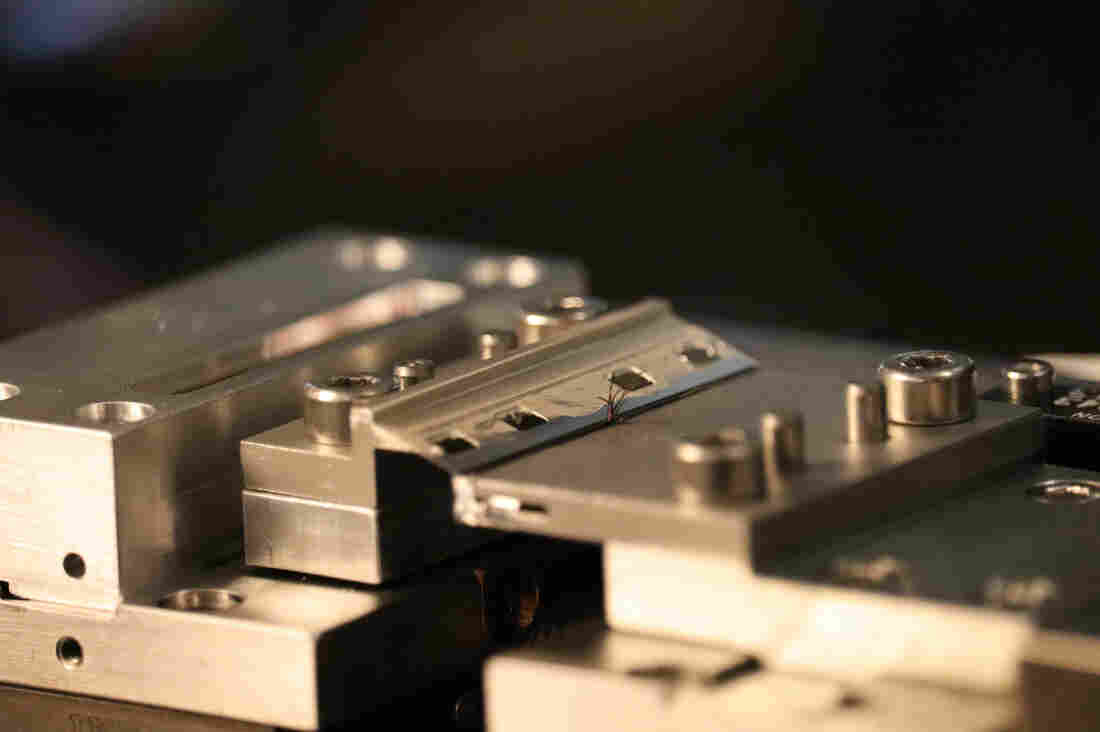 An experimental setup is used to perform hair-cutting experiments inside a scanning electron microscope in the Tasan Group lab at the Massachusetts Institute of Technology in 2019. Gianluca Roscioli hide caption 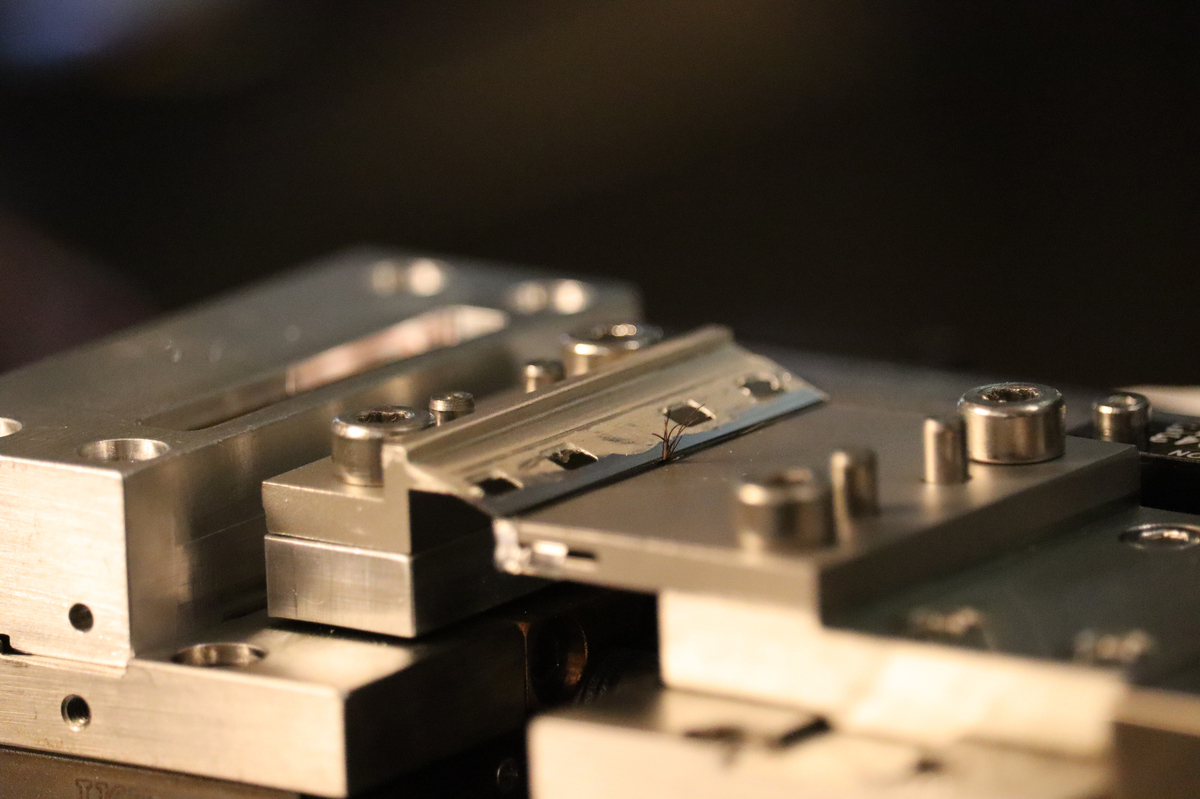 An experimental setup is used to perform hair-cutting experiments inside a scanning electron microscope in the Tasan Group lab at the Massachusetts Institute of Technology in 2019.

"We know that blades fail after a number of uses. And, you know, you sort of take it for granted, you feel that it is normal," Tasan says. But given that the steel used for razors is extremely hard, he points out, it's not clear why this should be so.

"For me, personally, it was both a scientific curiosity, of 'What's going on?' and also aiming to solve an important engineering problem," Tasan says.

He worked with two collaborators in his lab, graduate student Gianluca Roscioli and researcher Seyedeh Mohadeseh Taheri-Mousavi, to study methodically what happened to razor blades as they were used to shave again and again.

First, Roscioli purchased several brands of disposable razors. All of the blades were similar in terms of composition, he says. Under the powerful microscope, it was clear that the apparently smooth sharp edges had a jagged roughness.

An experimental setup using a microscope shows the slicing action of a blade through hair.

Every three days, Roscioli would use the razors to shave his own facial hair. He would then peer at them using the microscope again, to track the changes to each blade over time.

The scientists were expecting that the tip of the blade would gradually become shorter and rounder as repeated use wore it down. "We found out that, although that occurs, the rate at which it occurs is very low," Roscioli says.

What happened more frequently was appearance of chips and fractures invisible to the naked eye. "The size of the chips are about 1/10 of the diameter of a human hair," Roscioli says. "The more I shaved, the more chips started appearing on the blade."

To see how soft hairs could trigger this chipping, he created a setup that let him use the microscope to watch a razor blade as it cut through one or more strands. He had to arrange it so that the hair could bend in a natural way that mimicked what happens during real shaving. He used both his own hair and the hair of colleagues, so that he could see the effect of different diameters.

It turns out that the angle of the blade and the hair's interaction are important. Unfortunately, just knowing that wouldn't help people shave in ways that would prevent chipping, says Tasan, who explains that people's hair tends to grow in different directions, so it's just inevitable that some hairs will hit the blade in ways that could chip it.

In addition, minuscule cracks are already present in an unused razor blade. Another important factor turned out to be where the hair is pushing on the blade in relationship to those existing cracks.

"If these micro-cracks are positioned just at the edge of the hair that's being cut, these cracks propagated more easily," says Tasan, who adds that this is also difficult to control.

Another thing that contributed to cracking and chipping is differences within the blade — if there are zones within the metal that are slightly harder or slightly softer. That might be easier to try to control, Tasan says, by coming up with steel that is as hard as today's razors but has a more uniform internal structure. The group has already filed a provisional patent on a process that could do that.

The researchers' findings have intrigued other scientists interested in blades and metals.

"I've been shaving since I was 13, and it's a pain," says Suveen Mathaudhu, a materials scientist at the University of California, Riverside. "I've always wondered what made the blades dull from cutting hair and how to best shave and take care of my own face."

These results make sense to him. "It's a good finding that when the hair bends, or the blade interacts with the hair at a certain angle, it can cause chipping," says Mathaudhu, who notes he thought that corrosion would have played more of a role, given that shaving blades are exposed to water.

Jennifer Carter, a researcher at Case Western Reserve University, described the new work as "beautiful" and that getting these microscope images was "not a trivial thing."

Still, she notes that this was a controlled experiment and that other factors might contribute to dulling of a razor blade in the real world.

"I would have said it has to do with the fact that my spouse drops it on the counter," she says.