Accessibility links
Hiroshima: Atomic Blast That Changed The World Turns 75 The bombings of Hiroshima and Nagasaki were said at the time to be justified as the only way to end World War II. Seventy-five years later, legal experts say they would now be war crimes. 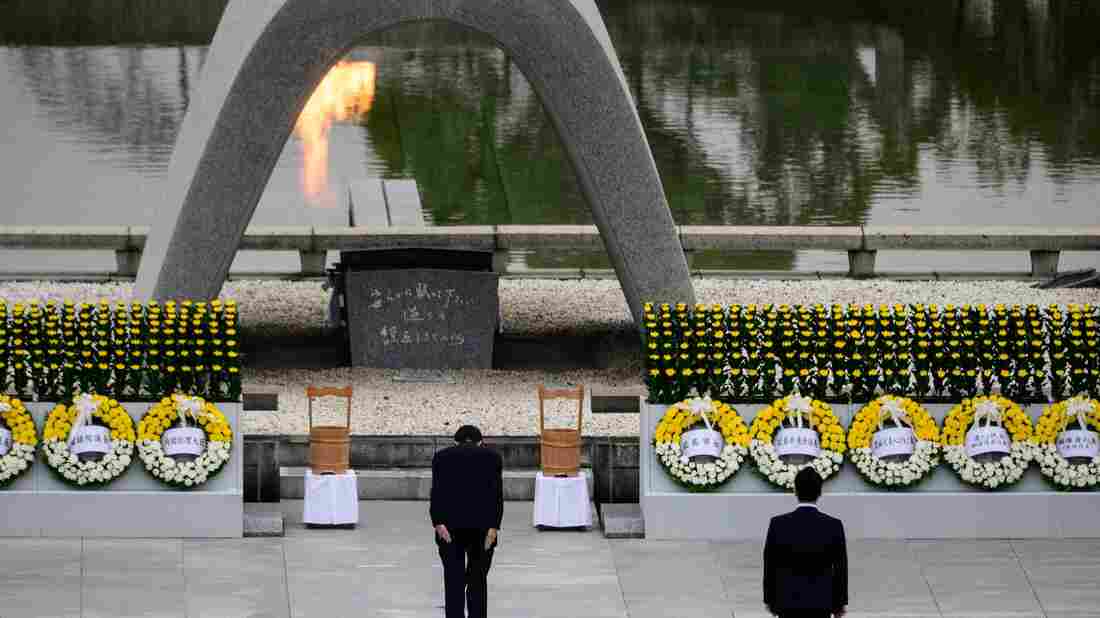 Japanese Prime Minister Shinzo Abe bows Thursday in front of a memorial to people who were killed in the 1945 atomic bombing of Hiroshima. Philip Fong/AFP via Getty Images hide caption 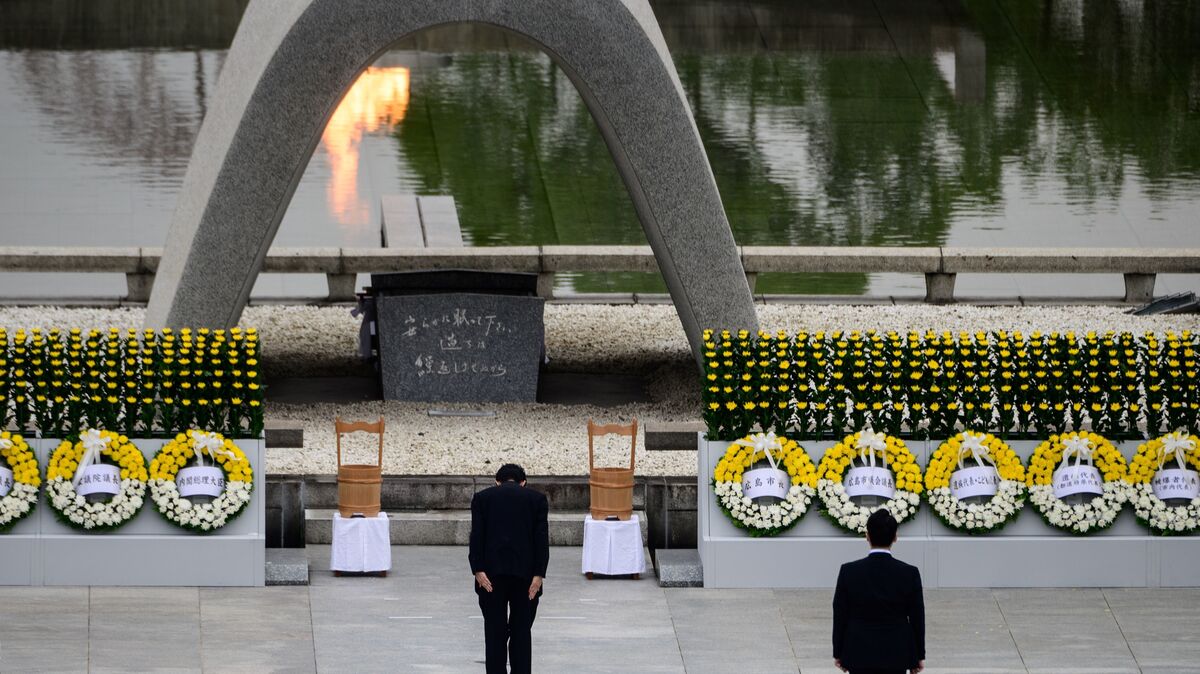 Japanese Prime Minister Shinzo Abe bows Thursday in front of a memorial to people who were killed in the 1945 atomic bombing of Hiroshima.

The dawn of the nuclear age began with a blinding, flesh-melting blast directly above the Japanese city of Hiroshima on Aug. 6, 1945. It was 8:16 a.m. on a Monday, the start of another workday in a city of nearly 300,000 inhabitants. An estimated two-thirds of that population — nearly all civilians — would soon be dead.

The dropping by American warplanes of that first atomic bomb, code-named Little Boy -- and another, code-named Fat Man, three days later in Nagasaki — led to Japan's surrender on Aug. 15, 1945, and the end of World War II.

At the time, the morality and legality of those nuclear attacks were hardly the subject of public debate.

"Let there be no mistake; we shall completely destroy Japan's power to make war," President Harry Truman, who ordered the attacks, declared in a speech to the nation hours after the bombing of Hiroshima.

"... If they do not now accept our terms, they may expect a rain of ruin from the air, the like of which has never been seen on this earth."

Opinion: 75 Years On, Remember Hiroshima And Nagasaki. But Remember Toyama, Too

The last surviving member of the crew that flew over Hiroshima that day died in November. Before then, he recalled what he thought while aboard a B-29 named Necessary Evil as the bomb dropped from another warplane, the Enola Gay.

"We had to go out and kill every one of them," former Army 2nd Lt. Russell Gackenbach, who flew as a navigator on both the Hiroshima and Nagasaki missions, told the Voices of the Manhattan Project in 2016.

In a 2018 NPR interview, Gackenbach expressed no second thoughts about the annihilation of most of Hiroshima's inhabitants.

"I do not regret what we did that day," he said. "All war is hell. The Japanese started the war. It was our turn to finish it."

But another witness to the 900-foot-wide fireball that heated the air above Hiroshima to 500,000 degrees Fahrenheit has made it her life's mission to eliminate nuclear weapons.

"We atomic bomb survivors are greatly disturbed by the continued modernization of nuclear weapons by the United States and other countries, and your stated willingness to use these instruments of genocide," 88-year-old Setsuko Thurlow wrote to President Trump in a letter published Monday in the Daily Hampshire Gazette. "... Nuclear weapons are not a necessary evil, they are the ultimate evil. It is unacceptable for any state to possess them."

Thurlow was a 13-year-old a mile from ground zero in Hiroshima the day the bomb fell there.

"Although that happened in the morning, it was already very dark, like twilight," she told NPR's Kelly McEvers in 2016. "I could see some dark moving object approaching to me. They happened to be human beings. They just didn't look like human beings. I called them ghosts."

A Survivor's Tale: How Hiroshima Shaped A Japanese-American Family

"They were covered with blood and burned and blackened and swollen, and the flesh was hanging from the bones," the atomic blast survivor recalled. "Parts of their bodies were missing, and some were carrying their own eyeballs in their hands. And as they collapsed, their stomach burst open."

Four years ago, President Barack Obama became the first American head of state to visit the Hiroshima Peace Memorial. He offered condolences, but pointedly did not offer apologies.

"The morning of Aug. 6, 1945, must never fade," Obama told a crowd gathered near the shell of the sole building left standing where the bomb exploded. "That memory allows us to fight complacency. It fuels our moral imagination. It allows us to change."

Pope Francis took a more critical stance during a November visit to that same memorial in Hiroshima.

"Using nuclear power to wage war is today, more than ever, a crime," the pontiff declared, adding it was immoral even to possess nuclear weapons.

Some prominent experts in the law of war are also reexamining the Hiroshima attack.

"There is no question that a dropping of a large nuclear weapon amongst the civilian population is a war crime," Harvard Law School professor Gabriella Blum says. "Under the current laws of war, if you know you are going to impact civilians, you must provide warning, and you must take precautions to avoid harming civilians to the extent possible. There is no doubt none of that was considered, and none of that was seriously weighed in reference to Hiroshima and Nagasaki."

In a similar critical vein, the cover story for the current issue of the Bulletin of Atomic Scientists is titled "Why the Atomic Bombing of Hiroshima Would Be Illegal Today."

"We know that one of the main objectives was to cause as much civilian harm as possible, to create a shock among the civilians," says Stanford Law School professor Allen Weiner, one of the cover story's three authors.

But Weiner also points out that in 1945 no nations had signed a treaty barring the kind of aerial bombardment of civilians that the U.S. carried out in Hiroshima.

"I'm prepared to really give a quite hardcore hedge and say that in 1945, the atomic bombing of Hiroshima and Nagasaki was not clearly illegal," Weiner says. "Today, it would clearly be illegal."