Accessibility links
Beirut Explosion Update: Lebanon Detains 16 People In Inquiry As Anger Mounts The investigation into the massive blast continues, a Lebanese judge says. The explosion has been traced to an estimated 2,750 tons of ammonium nitrate stored in a warehouse. 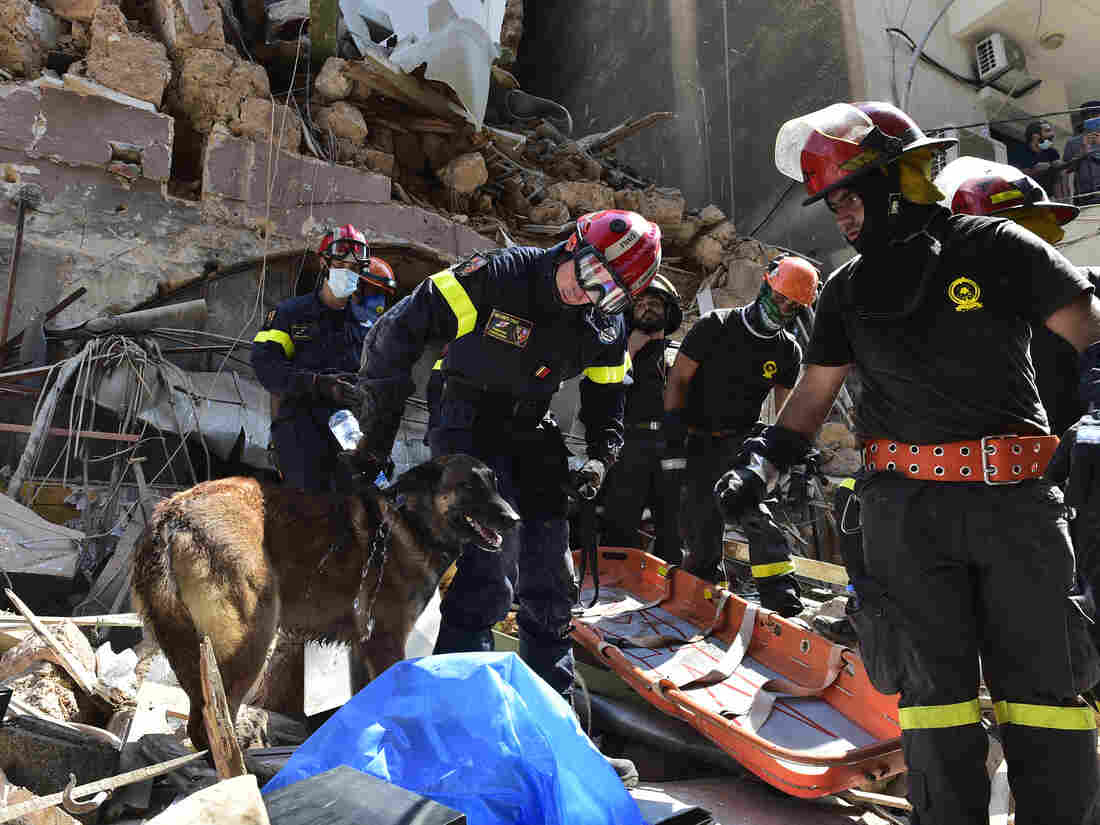 Some of Beirut's residents, angered by their city's seeming negligence that led to this week's deadly warehouse explosion, took to the streets late Thursday to demand reform.

In the central square of Beirut's mostly destroyed downtown, a group of Lebanese, some carrying shovels to dig through the debris, shouted, "The people want the fall of the regime."

The protests came as authorities in Lebanon detained 16 people as part of an urgent investigation into the enormous explosion that devastated Beirut's port area and much of the city on Tuesday. The blast has been traced to an estimated 2,750 tons of ammonium nitrate.

Haunting to read this now: A 2014 clipping on the ship at #Beirut port abandoned by owner. Beirut authorities wont release crew: "The reason is obvious, port authorities don’t want to be left with abandoned vessel on their hands, loaded with dangerous cargo, explosives, in fact". pic.twitter.com/ySizvi3HVQ

Judge Fadi Akiki, a government representative at the military court, said more than 18 people have been questioned so far, including port and customs officials, according to Lebanon's state news agency.

There are currently 16 people in custody, Akiki said, while others remain under investigation.

Tuesday's blast killed at least 137 people and injured thousands more. Emergency crews have been working to find all the victims, sifting through rubble and collapsed structures.

French President Emmanuel Macron made a heralded visit to Beirut on Thursday, saying he was there to offer support to Lebanon's people – but not necessarily to its government.

"This explosion is the beginning of a new era," Macron said, describing French disaster aid as a catalyst for political reform.

Well-wishers and passersby seemed to return the sentiment as crowds gathered around Macron when he surveyed the damage in Beirut's streets. Many vented their fury at Lebanon's leaders.

"Down with the regime!" Beirut residents chanted as Macron's group moved through the city.

The thousands of damaged buildings include NPR's bureau in Beirut. The bureau's landlord is an architect who has spent his career restoring traditional Lebanese homes, NPR's Ruth Sherlock said.

"He watched much of his life's work be destroyed in the blink of an eye," Sherlock said Thursday on Morning Edition. "And he said, 'You know, Lebanese are used to damage from the country's 15 years of civil war. But this destruction was like the destruction of all of the civil war in a single moment.' "

Ammonium nitrate like the material stored at the warehouse is used for a range of purposes, from making fertilizers to powering bombs. Lebanon's leaders said the ammonium nitrate had been stored under dangerous conditions for years.

"It seems the ammonium nitrate may actually have come on a ship that made an unscheduled stop at the Beirut port in 2013 because of technical difficulties," Sherlock said. "And then it was abandoned by the Russian businessman who leased it. Apparently, customs officials appealed six times to Lebanese courts for guidance on what to do," warning of the risk of keeping a dangerous substance in the crowded city.

Many countries are sending emergency supplies and workers to Lebanon; on Thursday, aid-carrying planes came from Tunisia, Italy, Russia and Morocco. Humanitarian groups are also rushing aid to people.

Nearly 80,000 children are displaced by the disaster, according to an estimate from UNICEF.

The powerful blast also damaged at least 12 health care facilities – and destroyed a children's hospital in the Karantina area, the aid organization says. It adds that 10 containers' worth of personal protective equipment was also destroyed at the port – which had operated as a key entry point for goods and aid for Lebanon.

"UNICEF is supporting the local authorities and partners, said Violet Speek-Warnery, the group's deputy representative in Lebanon. "Our teams have been working around the clock to support people affected with much-needed assistance."

"Lebanon was already struggling to cope. The economy has been in a tailspin, the local currency has lost approximately 80% of its value, and the last month has seen a dramatic increase in coronavirus cases with hospitals already under pressure," Ayoub said.

"People whose homes have been damaged or completely destroyed will not be able to access their money to start to repair or rebuild, and essential items like wheat and medicine will soon be scarce, as the Port of Beirut, the major storage and supply point, has been obliterated. A massive effort will be required to recover."