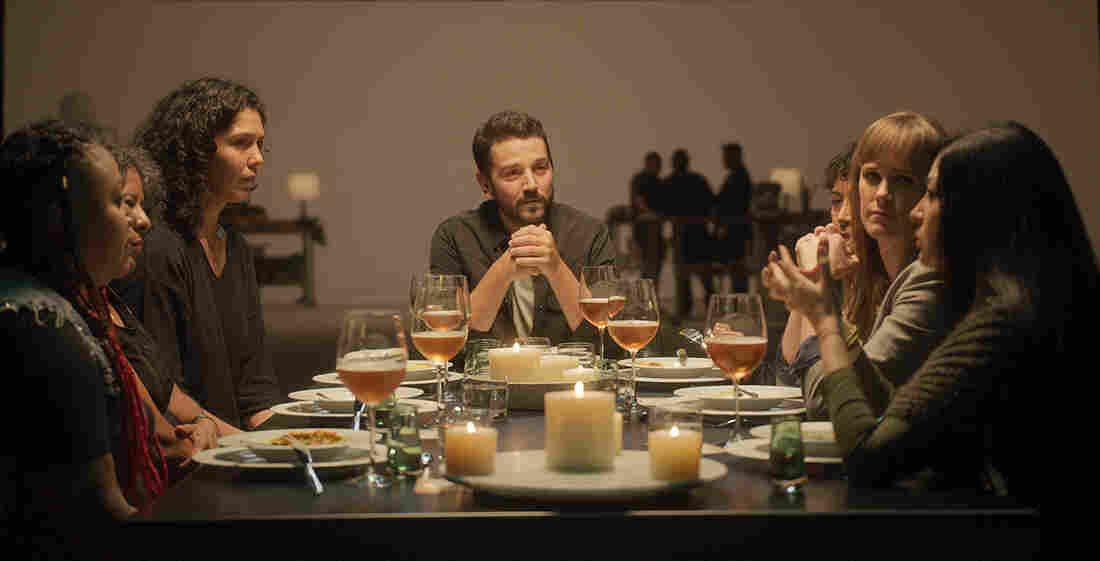 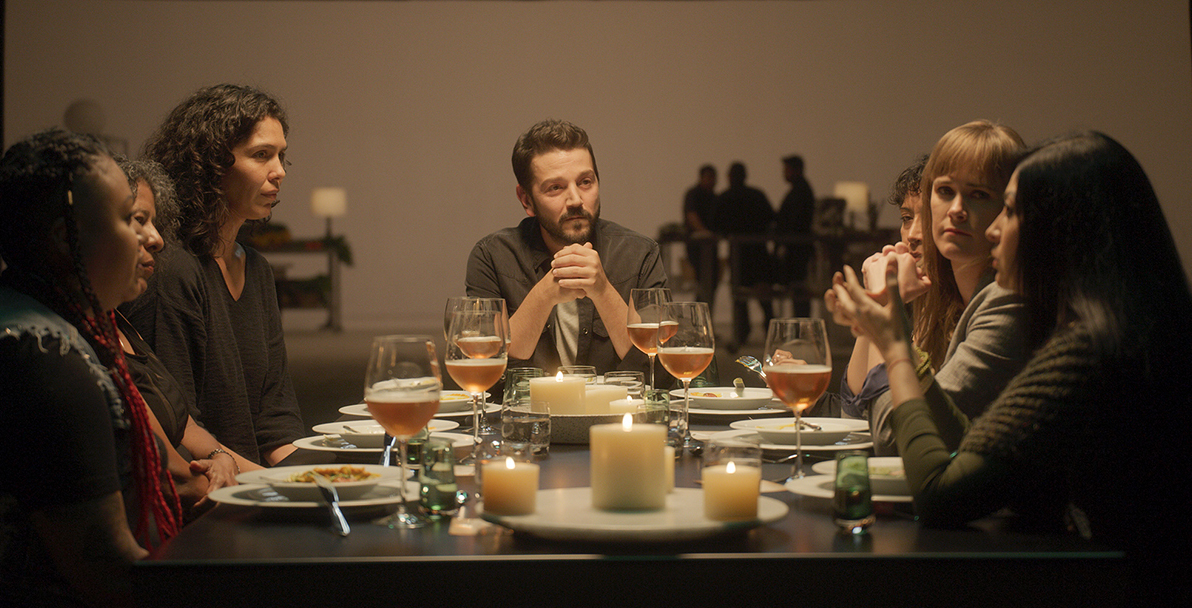 Scientists, artists, thinkers, activists and journalists gather for meals and conservation in an episode of Pan y Circo, hosted by Diego Luna (center).

The star of Y Tu Mamá También, Dirty Dancing: Havana Nights, Narcos: Mexico and Rogue One: A Star Wars Story has a new series that he hopes will compel audiences to do that. It's called Pan y Circo, or "Bread and Circus," out Friday on Amazon Prime Video.

The title is a reference to the poem "Satire X" by Roman poet Juvenal, who wrote in the second century that bread and circuses — food and entertainment — are all that's needed to convince Romans to give up their political freedoms.

"The title was not my idea," Luna says. "When I heard it that first time, I was like, it's perfect. It's perfect because it has the irony that the show wants to have. Also it's kind of like the show. It's the reaction of many years of bread and circus in this country," Mexico.

But the concept applies in many other countries as well, according to Luna, "where politics are a kind of a show for us to witness and get hooked."

Luna says he believes that coming together to eat and talk is the first step in breaking that cycle. In the first episode of Pan y Circo, he asks the audience to imagine a better future after the pandemic is over: "Even after the end of the outbreak, the damaged systems will remain damaged," he says in the series' first episode. "And if we want to fix them, if we have the will to repair what's wrong, we have to sit at the table."

In each episode of Pan y Circo, Luna hosts groups of scientists, artists, thinkers, activists and journalists for a meal and conversation. They talk about daunting societal problems, including gender violence, climate change and racism. They don't always agree on the problem, or what can be done about it. Sometimes the disagreements get heated.

And of course, they eat together at the same table, something that's no longer possible as a result of COVID-19. The disease highlights the urgency of what Luna is trying to accomplish: "With this pandemic, I live in a country where the numbers are horrible, but it's because we were sick already," he says. "It's not because of the pandemic. We were sick, and we were doing nothing. Now we have the chance to actually do something because we know how vulnerable we are."

On the importance of food and cooking to the project

It's been 10, 15 years that I've been really obsessed with what happens in the kitchen. Everything is the kitchen. No matter how much you want people to stay in the living room or at the table, it always ends up in the kitchen. And it's where you say everything, where you allow yourself to actually open, where the meaningful conversations happen.

The table is a place where at least we can remind ourselves that we can share the food. Doesn't matter who you voted for, what you believe in. At least sharing the food is something we are capable of doing.

The table is a place where at least we can remind ourselves that we can share the food. Doesn't matter who you voted for, what you believe in. At least sharing the food is something we are capable of doing. And it's the first step [before] the next one, which is the one that matters to me: How can we find a way to work together in this stuff?

After the elections in Mexico, I was seeing with a lot of worry and sadness how polarized my own family was, my friends, my work, my partners. There was no way to actually be in a discussion that didn't suddenly get to the point where people started saying: You're with me or against me.

To me, that's very dangerous, because in that moment, we as a society become incapable of actually bringing any kind of change. To be able to actually do something as a society, we need to find that civil power. We have to work together. We have to find a way to sit at the table and find those things we can agree on.

It was very interesting because I sat down at that table thinking I was one person and I ended up realizing I wasn't. ... I was fooling myself. And it confronted me with my ignorance and the very little that I do. And it was really interesting, the process, because that happened not just to me, but to the whole team of Bread and Circus.

I sat down at that table saying, I'm not a racist, I'm definitely not a racist. And after half of the dinner, I was like, holy s***, how much have I benefited through my whole life from the system, and how little I have done to fight it!

But it was very interesting to have that reflection, because then the dinner ends, and we come out from the control room. The team comes out, and we sit down and we start talking and we have a mezcal, and we discuss what just happened. And you can realize how these tables ended up transforming all of us somehow.

On how the COVID-19 pandemic changed the series

We were in post-production. We finished the shooting of the six episodes that Amazon agreed on doing with us. So I sat down and edited it for quite a long time with the team. And we were almost done, and thinking on how to put it out there, when the pandemic happened.

For me, the pandemic happened in a very specific way, very different from most of the people in Mexico. I was in London, and I was about to start working there and I was sent back home. Then I came here [to Mexico]. There [were] no cases, and it was like a different reality, you know, a parallel world where things were still the same for a few weeks.

And then my kids got sick; they were [among] the first cases in Mexico. We were talking about putting the show out, and I was experiencing that and they were sick and I wasn't. So I couldn't be close to them without having to protect myself as if I was working at NASA.

So I said, what if we do a show about this moment? And that way we can put all these topics in the table because we're starting from the point of: If we don't think about this now, if we don't do anything about gender violence, about migration, about the climate emergency, if we don't react now, then what's the point of all this craziness we're living? ... It was like, oh, my God, I have everything, and at the same time, [if] I can't hug my kids, then I have nothing.