Accessibility links
Postmaster General Touts USPS Overhaul But Promises On-Time Election Mail Louis DeJoy's political donations have sparked questions about whether he has an interest in affecting the delivery of mail ballots. He said the Postal Service has "ample capacity" to handle them. 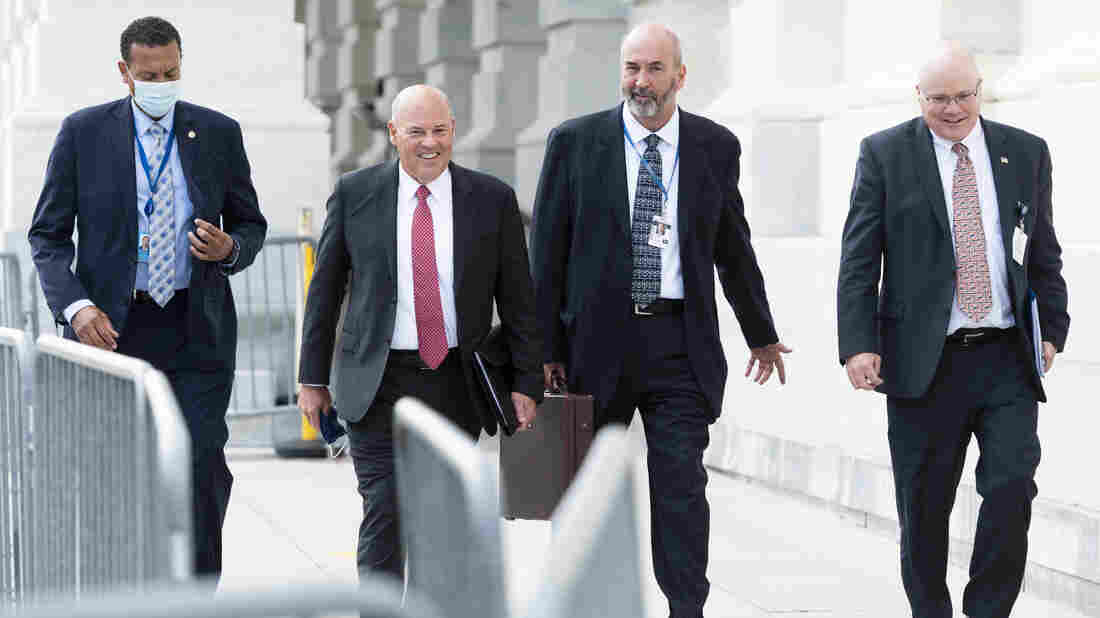 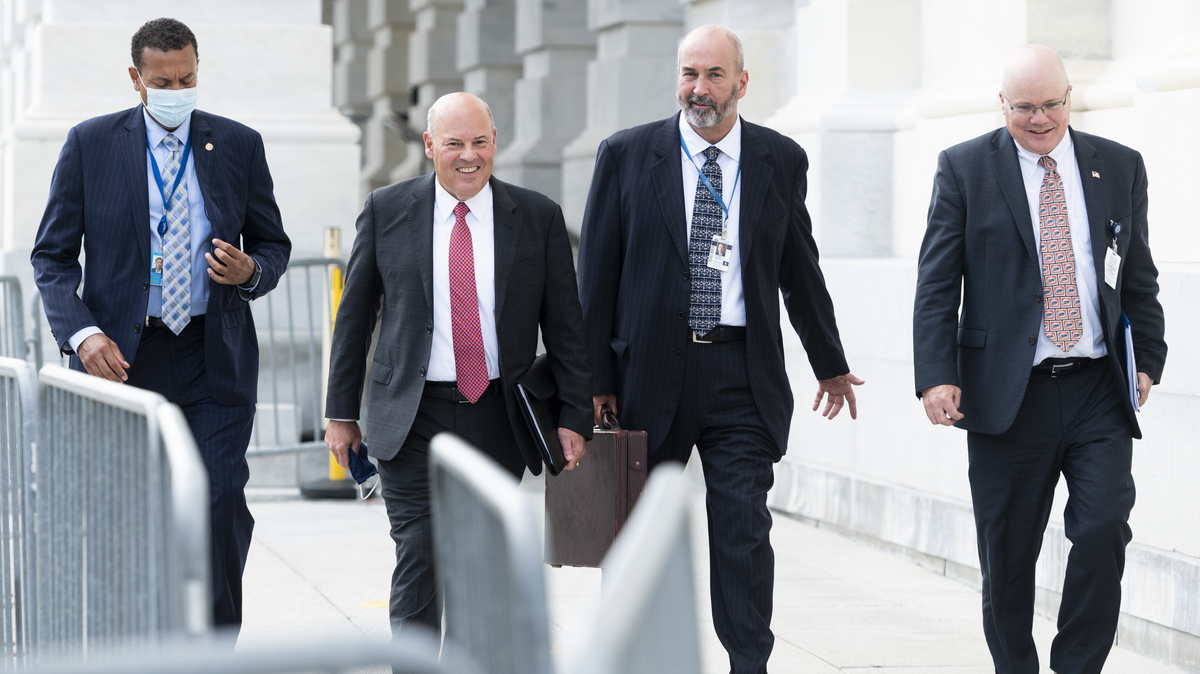 The head of the U.S. Postal Service promised Friday to make the organization more efficient and more financially stable, but his remarks may do little to quell fears that the post office's cost-cutting measures will hurt service during the coronavirus pandemic.

"We are at the beginning of a transformative process," Louis DeJoy said in his first public remarks since becoming postmaster general. "Our goal is to change and improve the Postal Service to better serve the American public, and I am excited about the opportunities ahead."

DeJoy confirmed news reports that part of that transformation will involve cutting back on overtime costs and "running our operations on time and on schedule." Many Americans on both sides of the aisle worry that the cuts will delay the delivery of important mail, from prescriptions for veterans to mail ballots for this year's presidential election, during a once-in-a-century health crisis.

As NPR's Brian Naylor reported last week, that means that among other things, late-arriving mail will now be left behind by carriers and delivered the next day.

The U.S. Postal Service reported a loss of $9 billion last year, and DeJoy said that loss could approach $11 billion this year.

"Our financial position is dire, stemming from substantial declines in mail volume, a broken business model and a management strategy that has not adequately addressed these issues," DeJoy said.

Later Friday, the Postal Service announced an overhaul of its leadership team in a memo posted on the USPS website.

Lawmakers in Congress have objected to the changes that DeJoy has implemented.

"While it is true that the Postal Service has and continues to face financial challenges, enacting these policies as cost-cutting or efficiency measures as the COVID-19 public health emergency continues is counterproductive and unacceptable," Senate Minority Leader Chuck Schumer, D-N.Y., and House Speaker Nancy Pelosi, D-Calif., wrote in a letter to DeJoy on Thursday.

It's not only Democrats, however, who are worried about the changes. Many Republicans, including Sen. Steve Daines, R-Mont., voiced fears about how the delays could affect rural communities.

"This action, if not rescinded, will negatively impact mail delivery for Montanans and unacceptably increase the risk of late prescriptions, commercial products, or bill delivery," Daines wrote in a separate letter Thursday to DeJoy.

Experts said it isn't certain whether the changes will lead to the sort of financial improvements for which DeJoy is hoping.

"The USPS is not a trucking firm," said Phil Rubio, a former letter carrier who is a professor at North Carolina A&T State University, referring to DeJoy's previous work as the head of a logistics company, in an email. "If letter carriers are out sick or self-quarantining due to COVID-19, someone has to carry their route, and overtime has to be used to get at least all first-class mail out every day."

The idea of "efficiency" in the Postal Service is also not new, Rubio explained. Almost 30 years ago, sociologist Vern Baxter called it the "prevailing institutional myth" of the post office in his book Labor and Politics in the U.S. Postal Service.

Leaving some first-class mail behind may result in small cost savings in the short term, Rubio said, but it will also probably result in people having less confidence in the institution, leading them to flee potentially to competitors.

"Leaving any [first-class mail] behind is bad service and bad business," Rubio said.

In his remarks, DeJoy also alluded to an upcoming "series of additional actions" that will "include new and creative ways for us to fulfill our mission," but he did not detail what those actions would be.

Voting experts said they expect this year's presidential election to include more mail ballots, sent and returned, than ever before. Some have estimated that as much as 70% of all votes cast will touch the mail, either in getting to voters or being returned to election officials or both.

Democrats and voting-rights advocates became immediately worried when DeJoy, who has donated millions of dollars to Republican candidates including President Trump, was named postmaster general in May. The changes he has implemented have not assuaged those concerns.

"Donald Trump is sabotaging the U.S Postal Service in an attempt to rig the election in his favor," tweeted Sen. Ron Wyden, a Democrat from Oregon, which was the first all vote-by-mail state, earlier this week.

State and local election officials are also worried about the ramifications of the measures.

On Friday, DeJoy sought to push back against what he called "misconceptions" — both that he is a political crony of Trump's as well as claims he is making policy changes to slow down or interfere with the delivery of ballots.

"While I certainly have a good relationship with the president of the United States, the notion that I would ever make decisions concerning the Postal Service at the direction of the president, or anyone else in the administration, is wholly off-base," he said.

He said the Postal Service has not changed anything about how it handles election mail, and he promised that the organization has "ample capacity to deliver all election mail securely and on time."

That message is in stark contrast with Trump, who earlier in the week tweeted that the post office would not be able to handle the influx of mail ballots that would result from Nevada's decision to mail every registered voter in the state a ballot.