Accessibility links
Singers Can Be Coronavirus Superspreaders, Say Experts Schools, faith and community groups as well as professional musicians are all struggling with the risks of singing. Experts present the most recent research and offer strategies to mitigate the risks. 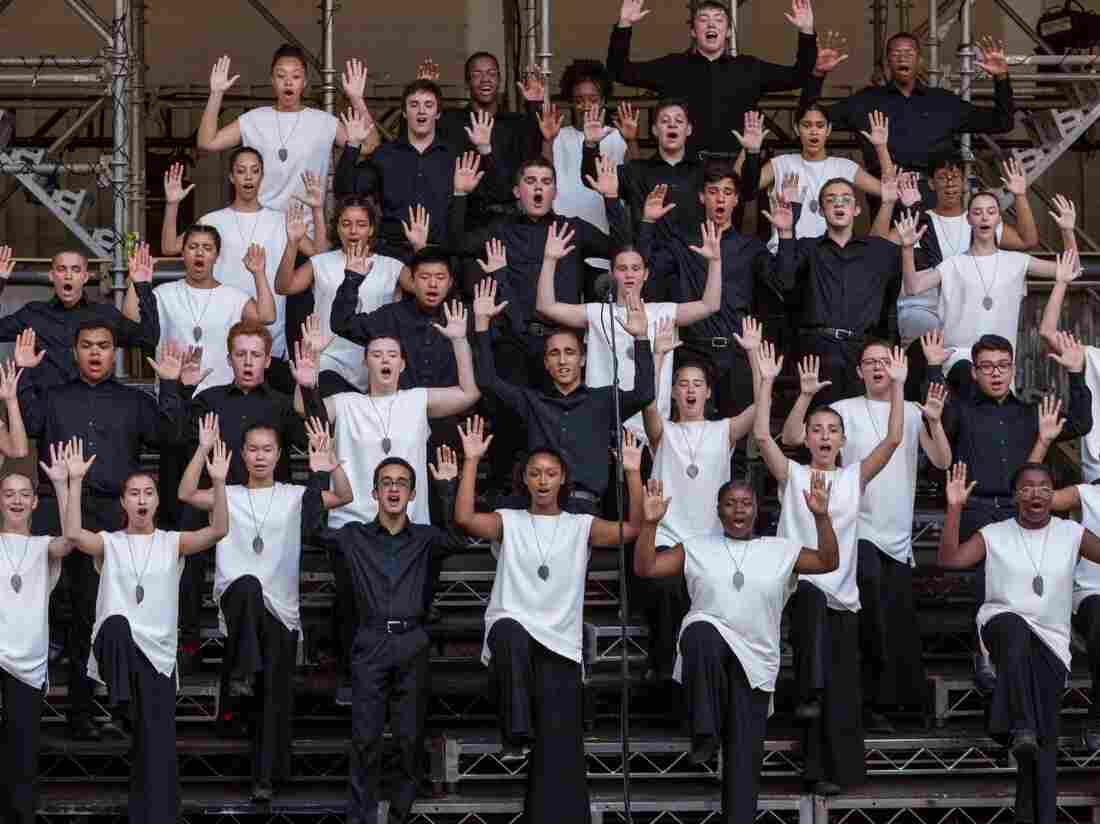 The Young People's Chorus of New York City, performing back in better times. Alexey Konkov/Courtesy of the artists hide caption 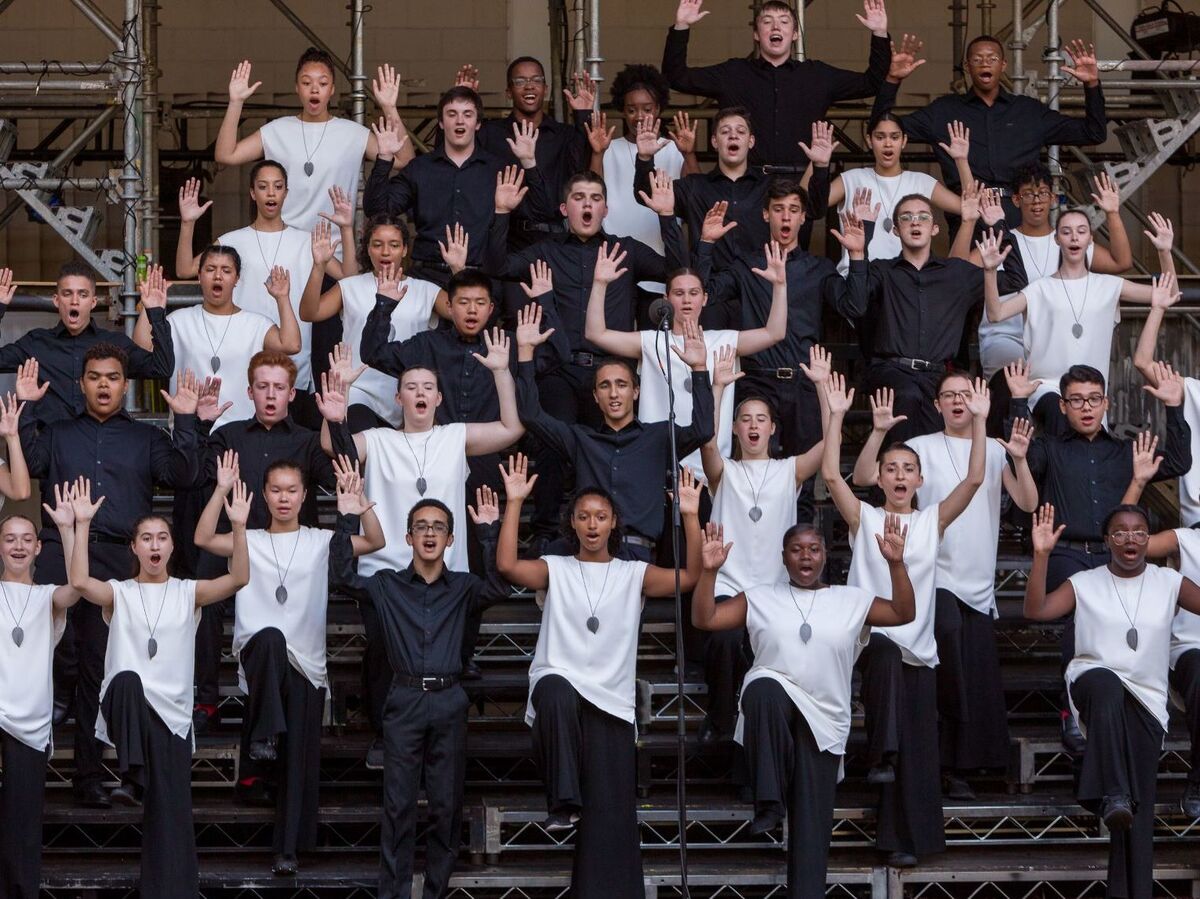 The Young People's Chorus of New York City, performing back in better times.

Alexey Konkov/Courtesy of the artists

Back in the days before the coronavirus pandemic, lots of people found community and comfort in singing together, whether at school, as a form of worship, in amateur groups or performing as professionals. Last year, Chorus America reported that some 54 million Americans — that is, more than 15% of the entire country's population — participated in some kind of organized group singing. And that study revealed that nearly three-quarters of those polled felt less lonely. Eighty percent said it made them "more optimistic, mindful and resilient."

"The community is the most important thing we have," says Francisco J. Núñez, the founder and artistic director of the Young People's Chorus of New York City (YPC), which includes some 2,000 kids aged 7 to 18 from across the city. And he's even more aware of what his students have lost in the pandemic.

After the shutdown in New York in mid-March, the YPC ensembles started meeting by Zoom just to talk. "Just seeing each other online that helped us socially, emotionally," Núñez says.

But that same month, singers and choral directors across the country became concerned after a chorus in Washington state made national headlines. Sixty singers in the Skagit Valley Chorale showed up to a two-and-a-half-hour rehearsal. Fifty-three of them became sick with the coronavirus, and two people died.

The CDC issued a report about the group in May, writing: "SARS-CoV-2 [COVID-19] might be highly transmissible in certain settings, including group singing events." But since then, the CDC has erased that messaging from its current posted guidelines, due to what American scientists worry are political concerns.

"Singing in a room for an extended period of time, in close contact with lots of people and no ventilation — that's a recipe for disaster," says Shelly Miller, a professor at the University of Colorado Boulder. Along with Jelena Srebric at the University of Maryland, Miller is leading a six-month research project looking at singers' and other musicians' transmission of aerosol particles.

Their team's research is funded by a consortium of organizations — from professional advocacy groups like Opera America to associations representing high school bands and choruses — who are all trying to figure out how they can get back together safely.

"Singing in a room for an extended period of time, in close contact with lots of people and no ventilation — that's a recipe for disaster."

In preliminary research published on July 13, Miller and her fellow researchers found that singers, as well as certain wind and brass instrumentalists, generate respiratory aerosols at high rates. In other words, they spew a lot of droplets into the air when they warble or blow. A second round of research published on Aug. 6 reinforced those findings and the team's recommendations.

Jose-Luis Jimenez, who is also a professor at the University of Colorado Boulder, explains the physics.

"And when the air is going very quickly," Jimenez continues, alluding to the force with which singers and some instrumentalists expel air, "it can basically grab a little bit of that material and put it in a particle, and then you expel it out into the air. That's what happens. So anything that makes the air go faster or more strongly or produce more air is putting out more respiratory particles. If you're singing, you're breathing in a lot of air, you're breathing out very forcefully, and you're also moving your vocal cords. The vocal cords are wet, they're covered in this fluid, they're vibrating, and that can also produce more particles."

As a result, Jimenez warns, group singing remains "extremely dangerous and irresponsible," pointing out numerous other super-spreading incidents among choruses worldwide. After the CDC released its report on the Washington singers, Jimenez and nine colleagues from across the U.S., Australia, Europe and the U.K., including Miller, wrote their own paper on the Skagit chorus and their "superspreading event."

Jimenez cautions against thinking that the Washington choir was an isolated case. "There have been other cases of super-spreading in choirs at least in the Netherlands [resulting in 102 ill people and four related deaths], Austria, Canada, Germany, England, South Korea and Spain," he says. "And those were just the ones that we found."

Jimenez has also created a publicly available and free tool that calculates coronavirus infection risk in various scenarios, including being in classrooms, participating in demonstrations, taking public transportation — and singing in a chorus.

Additionally, Miller's research shows that indoors, the risk of infection rises sharply if someone is exposed to viral particles for longer than 30 minutes.

So Miller says, if you must rehearse, do it outdoors with social distancing — and with masks. She adds that if outdoor meetings just aren't feasible, "What we're recommending right now is definitely staying six feet apart with masks, with good ventilation, in very short duration of 30 minutes, with breaks to air out the room."

But 30-minute meetings, and ensuring proper ventilation in schools and rehearsal spaces, may not be possible for many ensembles.

Miller's team will update their findings regularly before offering peer-reviewed, finalized results. "Normally with these kinds of studies," Miller says, "we don't release data until we are sure about what we're finding or saying. But right now, we're just like, 'Oh my goodness, we have to try to help with decisions — we want to keep people safe.' I feel like we are saving lives by trying to understand realistically what is happening."

The situation is even more dangerous for professionally trained singers — "vocal athletes," as Dr. Lucinda Halstead calls them. She's an otolaryngologist and a professor at the Medical University of South Carolina. She also has a particular interest in singers, and serves as the president of the Performing Arts Medicine Association. She says that those vocal athletes are physical powerhouses, in terms of the "amount of breath support and muscular integration they need to have to drive the vocal folds."

And with that power and agility, she says, comes the possibility of increasing viral transmission.

Both Jimenez and Miller contributed to an open letter that 239 scientists wrote to the World Health Organization in July, asking the organization to reconsider its position that viral transmission via aerosolized particles was not its major concern. The WHO responded by maintaining that the coronavirus is primarily spread through close contact, but that more research into aerosolized transmission is needed — and specifically referenced choir practice as one possible scenario.

As of now, the WHO's concern about group singing doesn't match up with current CDC guidelines.

In late May, the CDC posted guidance regarding singing for leaders of faith-based organizations, advising that they suspend or at least decrease use of choirs and musical ensembles as well as congregational singing and chanting.

But that specific guidance about singing was removed from the CDC website within a week. NPR reported that an unnamed federal official said that it was taken down because it had not been cleared by the White House.

Proposals to curtail singing in church settings have inevitably caused tension with Americans who believe that their freedom to practice their religion is being infringed upon.

In June, Vice President Mike Pence made a high-profile appearance at a Texas church event that featured a choir of about 100 singers — who performed unmasked. His appearance was billed as the "Celebrate Freedom Rally," meant to "celebrate our freedom as Americans and our freedom in Christ with you through worship."

Some localities have tried to enact measures specifically to address group singing, given scientists' concerns. In July, California moved to ban singing and chanting during worship services as a result of rising infection rates in the state.

Back in New York City, as weeks of lockdown turned into months, Francisco J. Núñez says that the Zoom chats weren't enough to buoy his students' spirits. "The longer it lasted, the more sad the children became," he observes. "And the conversations were starting to get difficult. So we needed to do something. That's when the singing started to happen."

Students sent in videos of themselves singing and Núñez and his team stitched them together to create the effect of a unified chorus.

The first project was a performance of "You'll Never Walk Alone," from Rodgers and Hammerstein's musical Carousel, that the group dedicated to New York's essential workers.

As the spring turned into summer, Núñez found that the kids he works with were carrying another burden. YPC became an outlet for his students — who are very diverse racially, ethnically and socioeconomically — to discuss racial injustice as protests broke out nationwide. "They started talking to each other," Núñez observes, "about what it's like to be a Black or brown young person in New York City right now, what it's like to be a white person, an ally."

Núñez says that he has tried to embrace the possibilities of this new virtual reality. "I don't see 120 kids getting together in a room right now," he says. "But I do see creating new ways. Classical music is undergoing a transition. Children's education is going to go into transition. I think it's a wake-up call for us."

The group's final concert of the season debuted on YouTube last month. Its title was "Forward Together" — striking a hopeful note, no matter what's ahead.