Accessibility links
What Phoenix-Area Voters Say About Trump, Biden, Coronavirus An NPR/Marist focus group of Phoenix-area voters weighs in on President Trump's campaign messages, and his handling of the pandemic and race relations. 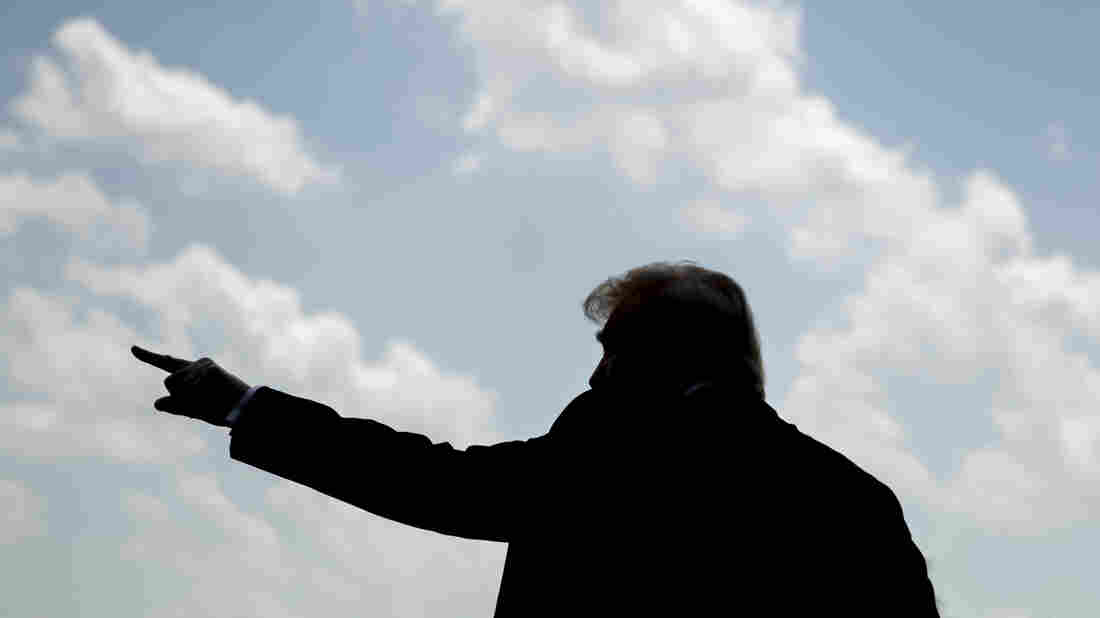 "You won't be safe in Joe Biden's America," one of President Trump's campaign ads argued. A focus group of Phoenix-area voters weighs in on Trump's campaign messages, and his handling of the pandemic and race relations. Andrew Harnik/AP hide caption 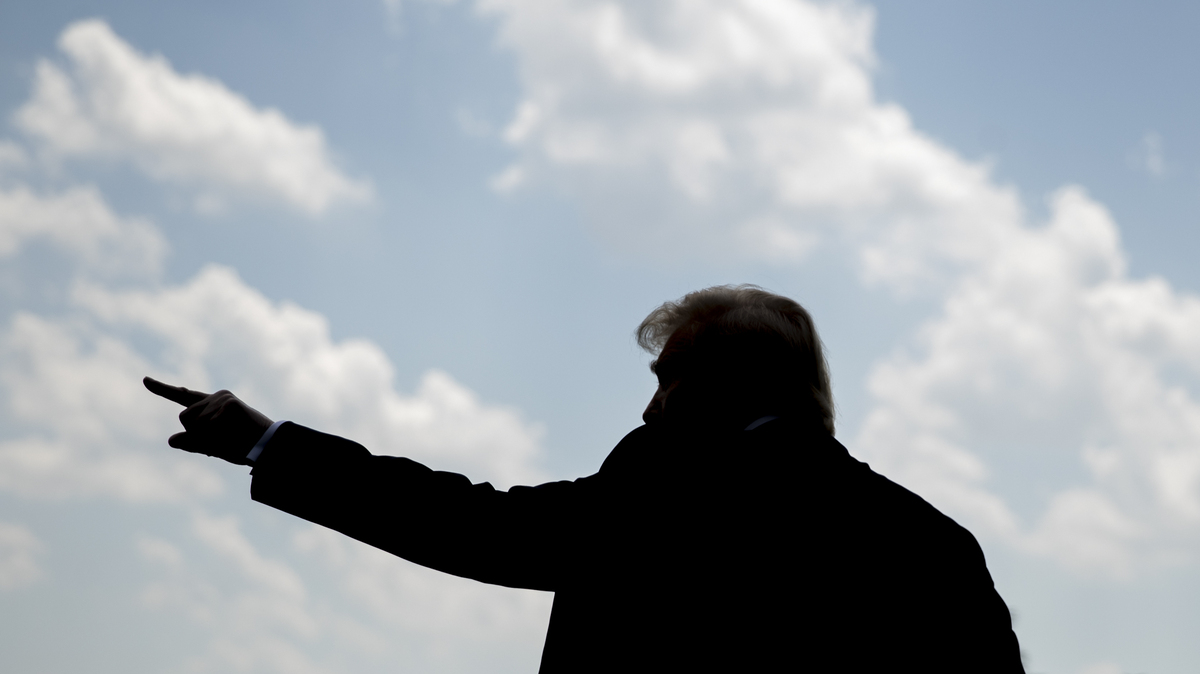 "You won't be safe in Joe Biden's America," one of President Trump's campaign ads argued. A focus group of Phoenix-area voters weighs in on Trump's campaign messages, and his handling of the pandemic and race relations.

The ad is stark.

An elderly white woman is watching the news. An anchor reports that cities want to "defund" the police, as she hears a noise coming from elsewhere in the house.

She calls 911 — as Fox News Channel's Sean Hannity says that Joe Biden is "absolutely on board with defunding the police" — only to be told that there is no one there to answer her call and she should leave a message.

The ad ends with the words "You won't be safe in Joe Biden's America" on the screen and the woman's phone dropping to the floor.

"If we start talking about that ad being reality, we've got a lot of problems," said Shyla, a self-described President Trump supporter from Arizona, after being shown the campaign spot. She described the ad as "very far from reality."

Shyla was one of eight people from the Phoenix area who recently participated in a 90-minute virtual NPR/Marist focus group. The group included Trump supporters, Biden backers and undecided presidential voters. Only participants' first names were used.

"Every time I see it, I laugh," said Troy, a Biden backer, who then used an expletive to describe the ad.

Stephanie, also a Biden supporter, said it was just Trump being a "fearmonger."

Courtney, an undecided voter who hadn't yet seen the ad, called it "typical political campaigning" and "extremist," not a "middle of the road thing."

During the focus group and in a follow-up interview days later, Courtney, a white woman who's 47, seemed vulnerable to a political message about crime. She told a story about a dangerous neighbor and mentioned other specific crime-related anecdotes.

But she said her concern about a potential increase in crime was not because of Biden, but because of the downturn in the economy and those suffering from a decline in mental health as a result of being in quarantine from the coronavirus pandemic.

In fact, in the follow-up interview, she said if she had to make a decision today about which candidate to vote for, it would be Biden.

"The only thing that would keep me from voting for Biden in November is if it were to hinder progress that we're making in the country," she said. "In other words, if there was some type of potential vaccine and big improvements on the economy."

And she still gives Trump credit on the economy: "People don't like him. But I think he's a good businessman."

Courtney, who is originally from Texas, said she voted twice for former President Barack Obama but did not vote in 2016. "Honestly, I was not a huge fan of Hillary," she said, referring to Democratic nominee Hillary Clinton.

But she feels differently about Biden. "I like Biden clearly," she said. "I think Biden is a more reasonable person [than Trump]. I think he's a more nonreactive person, like, Trump is so reactive, it's scary, right? He just reacts rather than thinking about it."

Still, she said she has concerns about Biden's age (he's 77, Trump is 74) and is still potentially open to voting for Trump if voting for Biden would be too "disruptive."

"Pull your pants up"

Geovanny, a college student who would be voting in his first presidential election, said he's not sold on either candidate.

He works as a cashier and noted that his place of work had only taken recent action to install protective gear, which he said was too late.

His father was recently diagnosed with COVID-19, and he's angry about how the state has handled the pandemic. That may be a motivating factor for him this fall, he said.

"The leadership in our state," he said, "they're having to play catch-up a lot." He added that this all "could have been prevented, if we'd just taken action sooner." 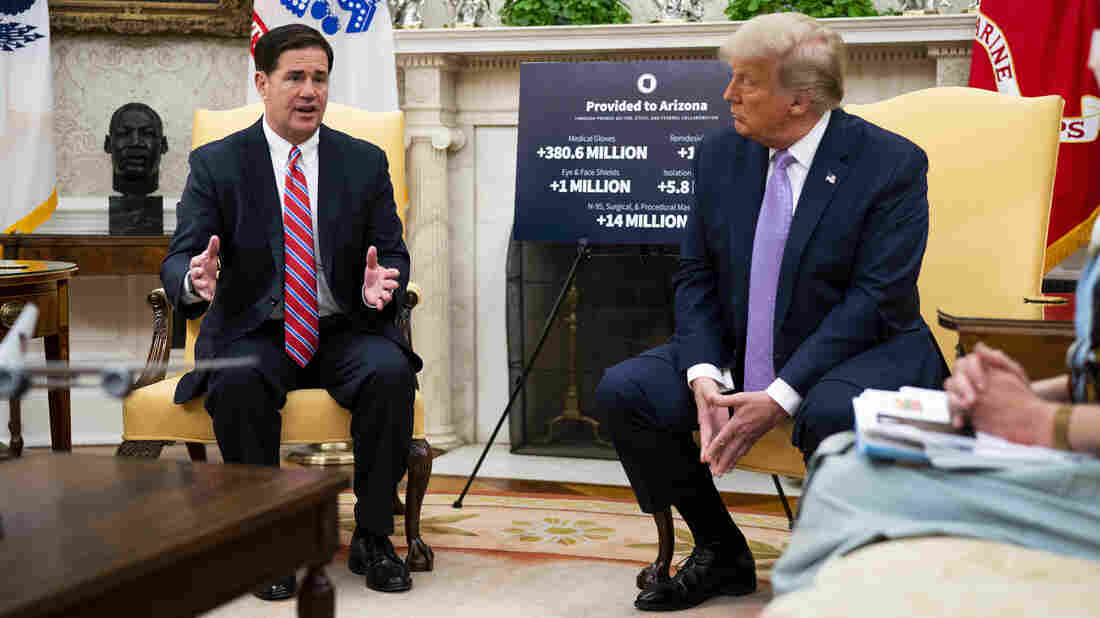 Trump meets with Arizona Gov. Doug Ducey in the White House on Aug. 5. Geovanny is angry about how the state has handled the pandemic. That may be a motivating factor for him this fall, he said. Doug Mills/Pool/Getty Images hide caption 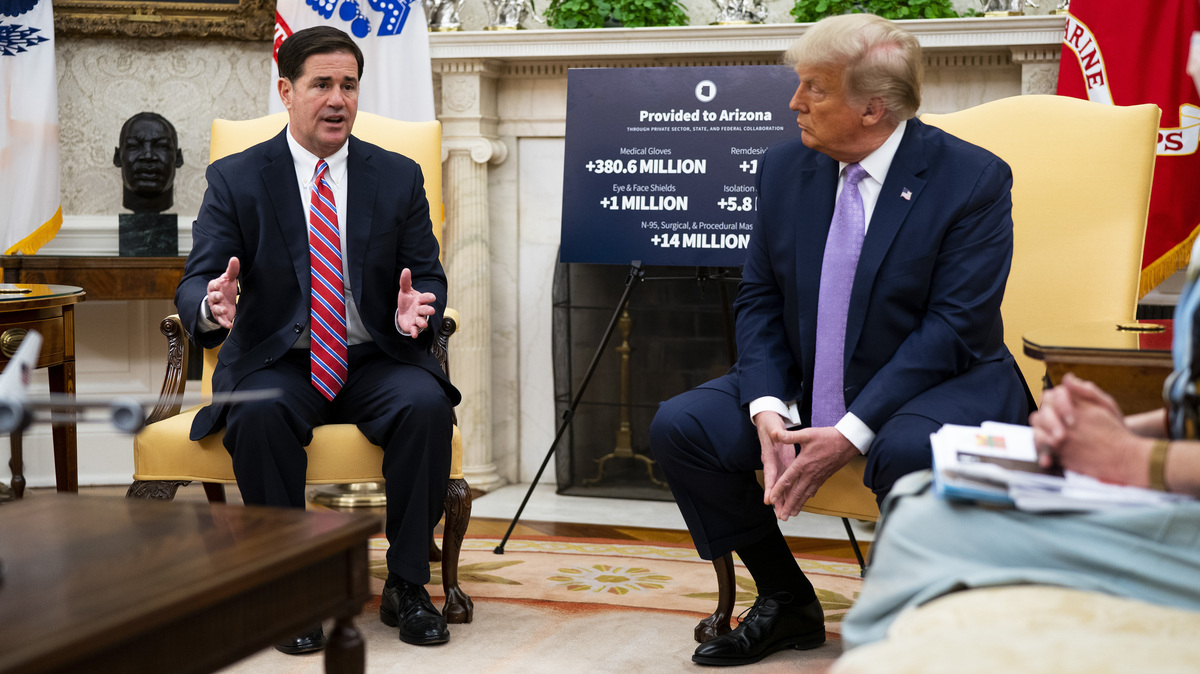 Trump meets with Arizona Gov. Doug Ducey in the White House on Aug. 5. Geovanny is angry about how the state has handled the pandemic. That may be a motivating factor for him this fall, he said.

A poll last month found almost two-thirds of Arizonans disapprove of the job Republican Gov. Doug Ducey is doing on the pandemic — up sharply over the prior two months, as coronavirus cases in the state surged. And he did not get good reviews for his handling of the virus during this focus group.

"I think our governor is a joke," said Stephanie, a Biden supporter. "Pull your pants up, and do what you gotta do."

Courtney was more charitable. She said she likes Ducey and said he was looking out for businesses and that she originally agreed with Ducey and Trump that states and businesses should open up sooner rather than later.

But now, she thinks Arizona opened up too soon and that there should have been more of a unified, national response with guidelines that were adhered to.

Everyone in the group took the coronavirus seriously, even if grudgingly for those who leaned right.

"I think they're just testing more," Allen said. "I don't think we're that bad at all."

Yet he said that he now wears a mask when he goes out to a restaurant.

How This Conservative Florida County Became A Surprise 2020 Battleground

Courtney, who has been physically going in to work, said she wears a mask now, but didn't wear one early on when going to the grocery store, for example.

"I think he's out of touch"

Overall, the group was not impressed with Trump's handling of the coronavirus pandemic or race relations, for that matter.

They all saw the Black Lives Matters protests as legitimate, except for looting that happened in some places. But even Allen said he believed the protests were hijacked by "guys with backpacks" who were "just there to riot."

There was consensus that the protests had forced them to reconsider what they thought they knew about structural racism, and several talked about a "switch" in their views.

Stephanie, one of the Biden supporters, said that when she first saw former NFL quarterback Colin Kaepernick kneeling on the sidelines before a game during the national anthem, she thought he was "disrespecting the flag for his own needs."

But she sees it differently now. "I still love this country," she said, "but I finally understand what he did, why he did it. He didn't do it for him." 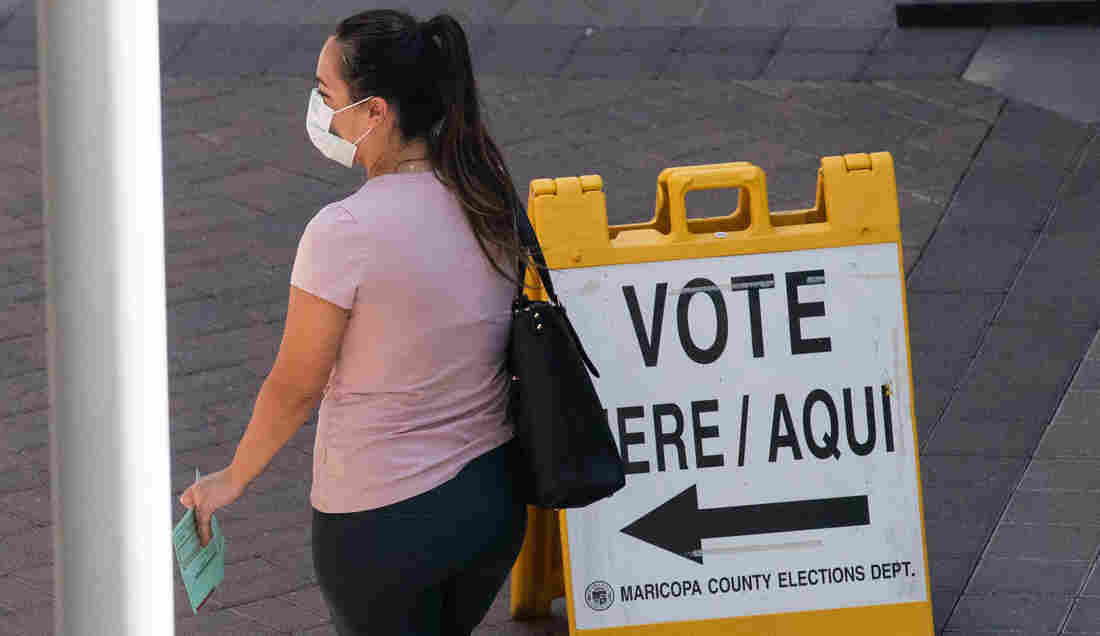 A voter waits to cast their ballot during Arizona's primary election on Aug. 4 in Phoenix. Courtney Pedroza/Getty Images hide caption

Courtney, who said she's concerned about a potential uptick in crime, was biting about Trump's views on race.

"I think he's out of touch," she said. "I think he's insensitive to minorities. He's insensitive to anyone who has not had the opportunities that he's had. He just ... has not had a realistic life, his kids have not had a realistic life. He's out of touch. I don't listen to what he has to say about Black Lives Matter, any of that, because I think he doesn't have a good perspective on it."

It's tough to effectively deliver a message when people don't believe the messenger.

Trump's voters in the focus group were not waving the flag high. Shyla, for example, said this election, like 2016, was "picking the lesser of two evils, times 100 this time."

But given some of her conservative views, especially on the role of government ("The government is way too involved in all of this in general"), she's still voting for Trump.

Biden voters, on the other hand, and as polls have also shown, were less enthused about voting for Biden than against Trump.

Troy, for example, described his vote as "primarily against Trump." But he is highly motivated to vote this fall.

It shows, once again, that this election is all about Trump. And for as much as he tries to make it a choice between him and Biden, for this group, it's a referendum.

And unless Americans view improvement in Trump's handling of the coronavirus pandemic, the economy or race relations, it's going to be difficult for him to win reelection.

That's especially true if his attacks against Biden continue not to stick.

The day after this focus group was conducted, it was reported the Trump campaign pulled the 911 ad out of rotation.