Accessibility links
Who Is Kamala Harris? Senator From California Is Biden's VP Pick The selection will make Harris the third woman and first Black and first Asian American candidate to be nominated for vice president by a major political party. 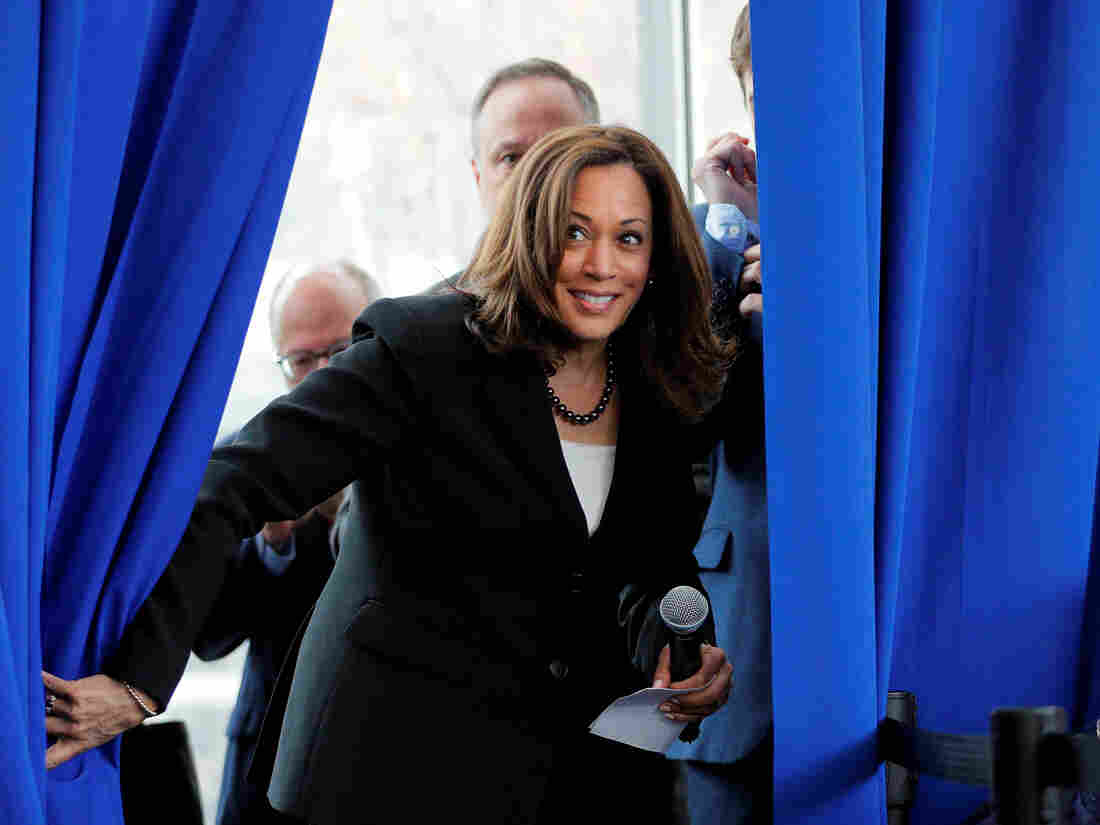 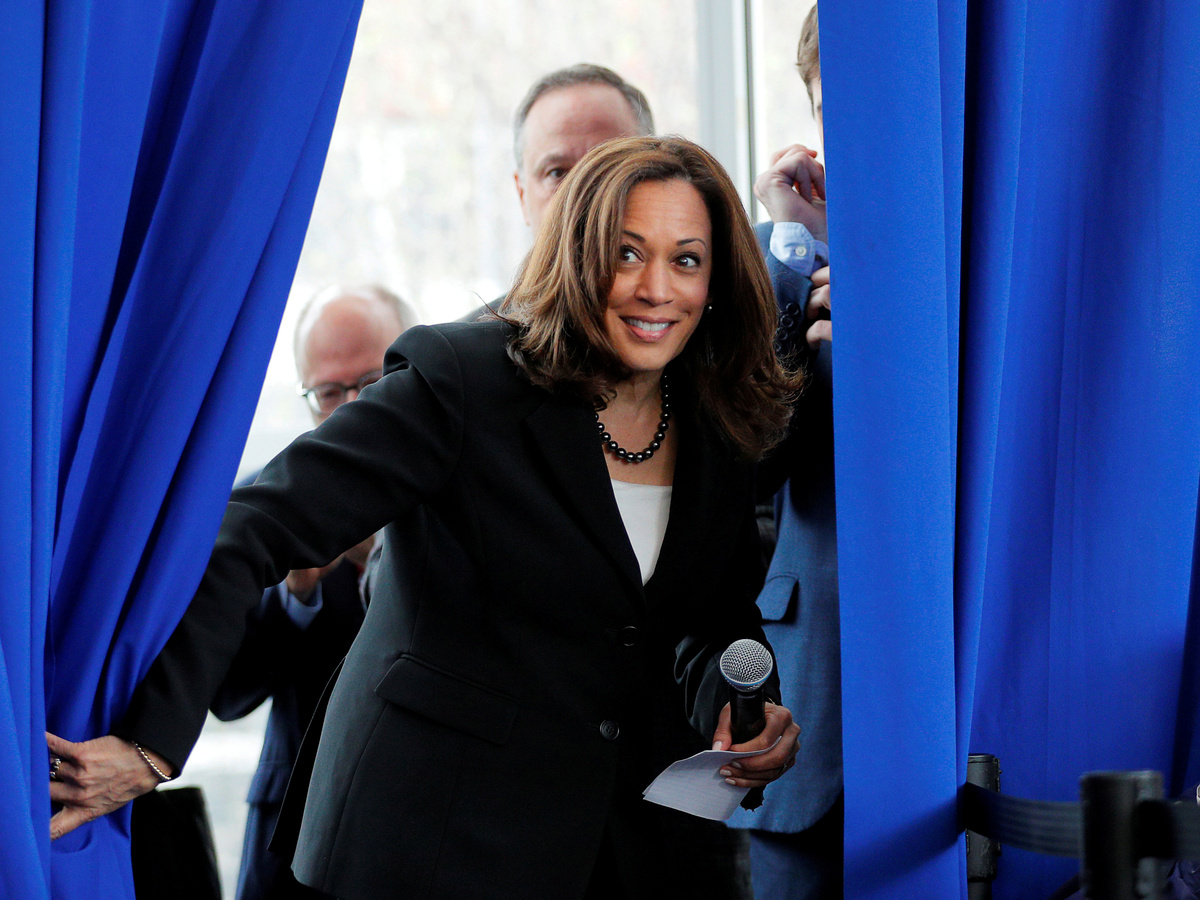 Sen. Kamala Harris, D-Calif., takes the stage at a campaign stop at Keene State College in Keene, N.H., in April 2019.

The selection will make Harris the third woman and first Black and first Asian American candidate to be nominated for vice president by a major political party.

"These aren't normal times," Biden said in an email to supporters Tuesday afternoon, referencing the coronavirus pandemic and calls for racial justice. "I need someone working alongside me who is smart, tough, and ready to lead. Kamala is that person."

Harris tweeted that she's "honored" to join the ticket, saying Biden can "unify the American people because he's spent his life fighting for us. And as president, he'll build an America that lives up to our ideals."

In his note, Biden also referred to Harris' friendship with his late son, Beau. Harris and Beau Biden were state attorneys general at the same time.

"[Beau] had enormous respect for her and her work," Joe Biden wrote Tuesday. "I thought a lot about that as I made this decision. There is no one's opinion I valued more than Beau's and I'm proud to have Kamala standing with me on this campaign."

The two are set to deliver remarks in Biden's hometown of Wilmington, Del., on Wednesday, and together hold a virtual fundraiser.

The pandemic prevents Biden and Harris from rolling out their ticket in the usual format: a boisterous introductory rally in a key swing state. 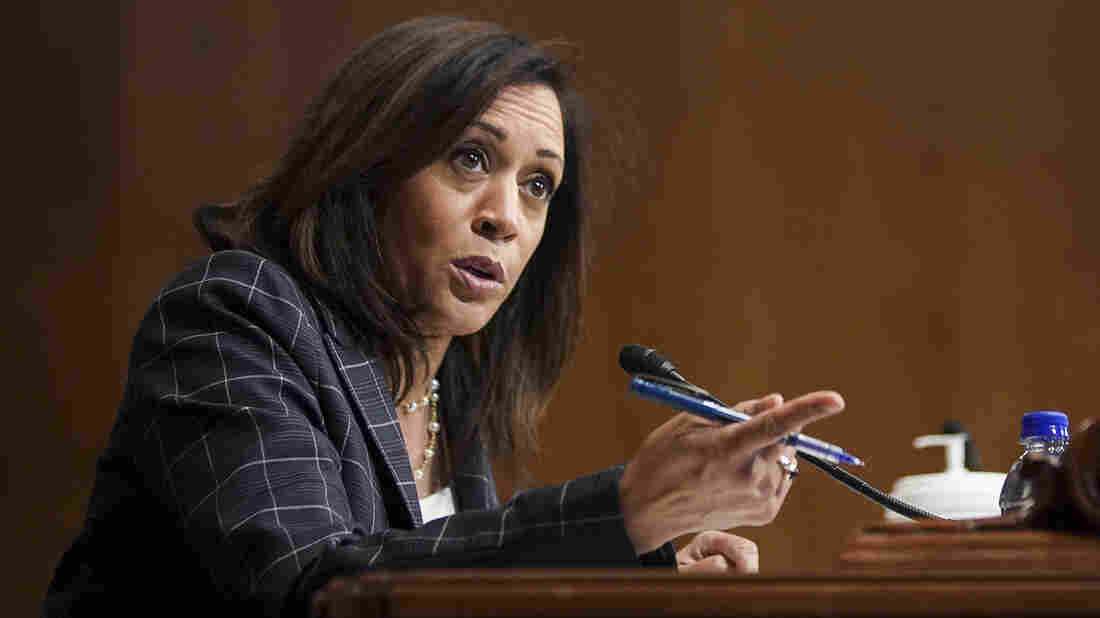 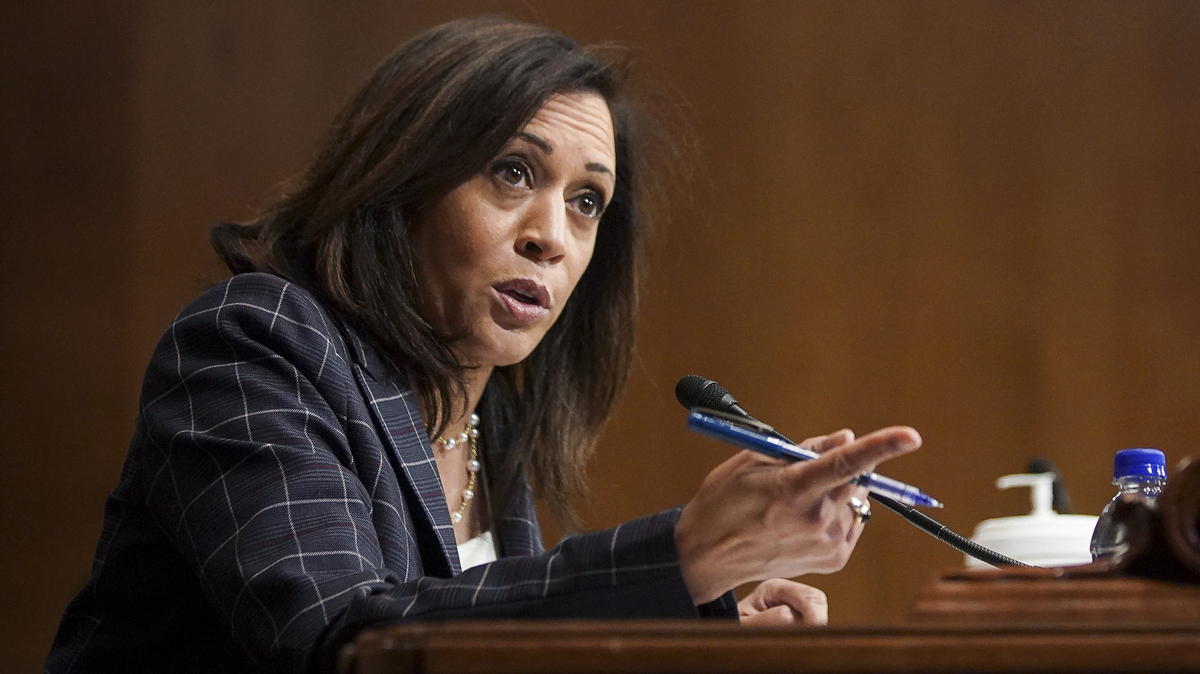 Sen. Kamala Harris will become the first Black and first Asian American candidate to be nominated for vice president by a major political party.

The Harris pick creates a Democratic ticket that in many ways mirrors the one Biden ran on in 2008 with then-Sen. Barack Obama: An older white man and Washington lifer with deep foreign policy experience is paired with a younger, Black running mate with immigrant roots who has been in the Senate just four years yet still has managed to carve out a national profile. Only this time, Biden is occupying the top spot.

Biden's age, and the fact that the 77-year-old has repeatedly referred to himself as a "transitional" candidate, will almost certainly place increased focus on the 55-year-old Harris as the likely future leader of the Democratic Party.

"That little girl was me"

The ticket is being formed despite a moment of tension between Biden and Harris during the Democratic primary. While Biden regularly criticized Obama's lack of experience when he was also running in the 2008 Democratic primary, Biden never attacked Obama in the high-profile, personal way that Harris did during a televised debate in 2019.

Harris, whose own campaign saw Black voters in South Carolina as key to her chances of winning the primary, criticized Biden for previously opposing federal busing mandates. "There was a little girl in California who was part of the second class to integrate her public schools," Harris said on the Miami stage. "And she was bused to school every day. And that little girl was me." The attack briefly cost Biden support and surged Harris toward the top of the polls, but those numbers quickly reversed themselves, especially after Harris conceded that she and Biden held similar views on whether busing decisions should be made on the local or federal level.

Harris ultimately endorsed Biden and campaigned for him after suspending her presidential campaign in late 2019. 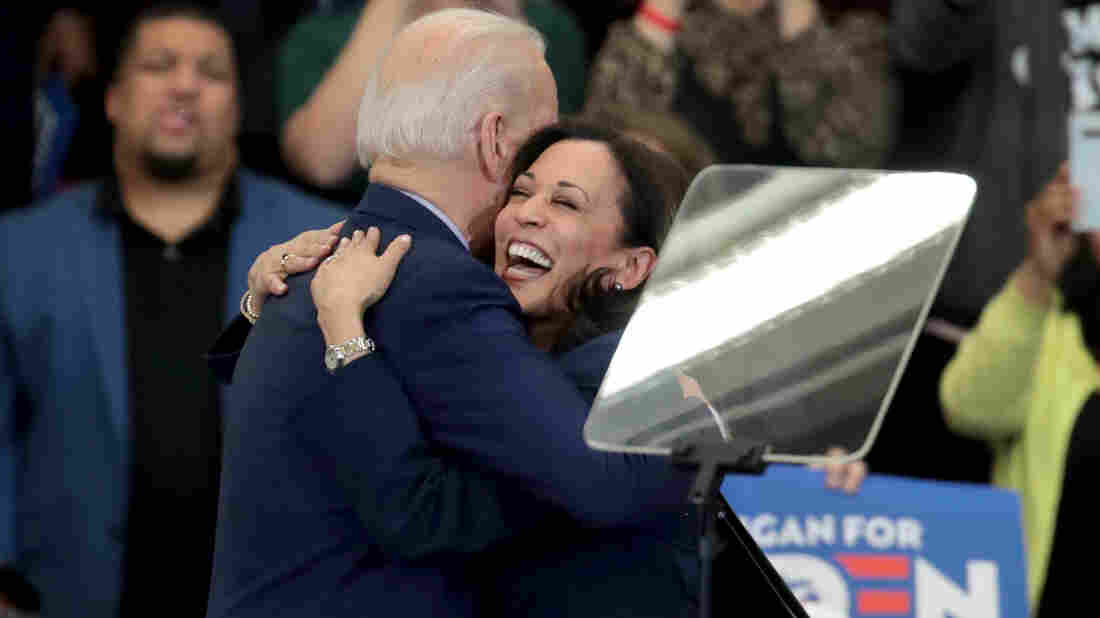 Biden and Harris embrace after she endorsed and introduced him at a March 9 campaign rally in Detroit. Scott Olson/Getty Images hide caption 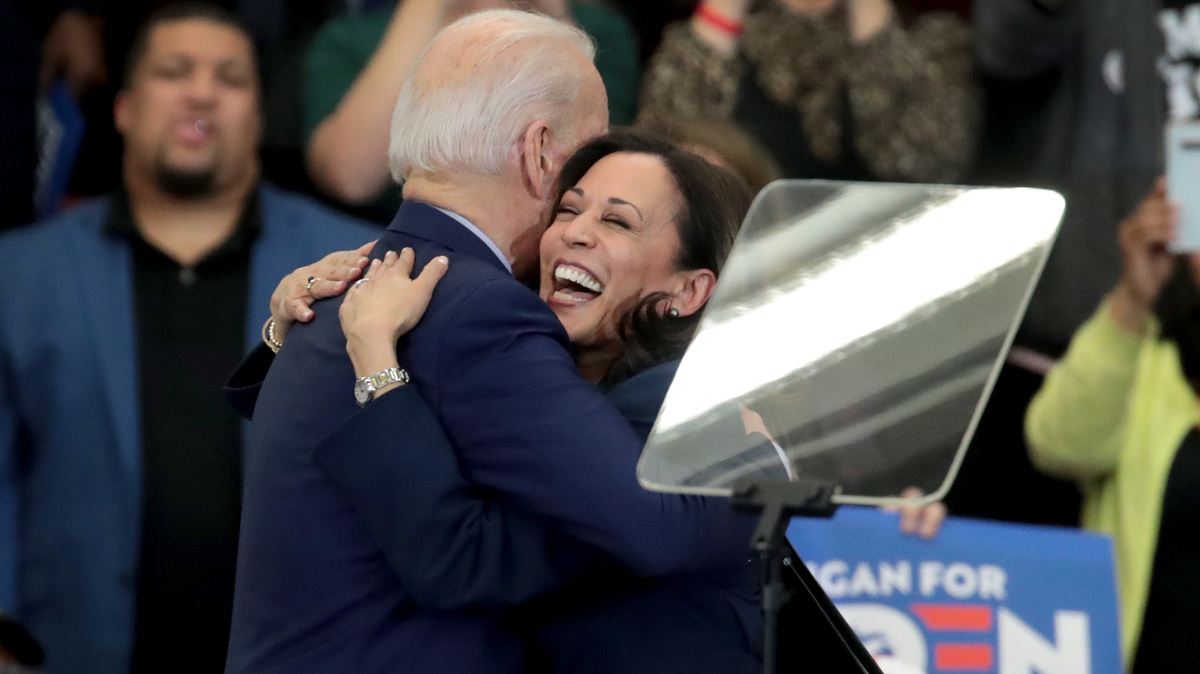 Biden and Harris embrace after she endorsed and introduced him at a March 9 campaign rally in Detroit.

Ahead of the running mate selection, several Biden allies and donors warned in the press that the debate attack was too personal, and too harsh, for Harris to serve as Biden's vice president.

The critiques raised cries of sexism — particularly a Politico report saying former Sen. Chris Dodd of Connecticut, a member of Biden's vice presidential selection committee, was surprised that Harris had no "remorse" for the attack.

Many Democrats pointed out that Biden, George H.W. Bush, John Edwards and other men who became running mates of people they had opposed in a presidential primary rarely faced questions about whether they had any "remorse" for campaign critiques, or whether they were too "ambitious" for the No. 2 job.

Ahead of Harris' selection, a group called We Have Her Back — which includes former Obama senior adviser Valerie Jarrett and leaders from Planned Parenthood and the National Women's Law Center — sent a letter to various media outlets demanding fair coverage of the vice presidential candidate.

"Women have been subject to stereotypes and tropes about qualifications, leadership, looks, relationships and experience. Those stereotypes are often amplified and weaponized for Black and Brown women," the letter said, urging the media to resist popular coverage tropes such as "likeability" and "electability" for candidates who happen to be women — analysis they said is hardly ever applied to male candidates.

Obama, Trump respond to the selection

Obama offered his congratulations to Harris, saying in a statement Tuesday that Biden "nailed this decision."

"She is more than prepared for the job," Obama said of Harris. "She's spent her career defending our Constitution and fighting for folks who need a fair shake. Her own life story is one that I and so many others can see ourselves in: a story that says that no matter where you come from, what you look like, how you worship, or who you love, there's a place for you here. It's a fundamentally American perspective, one that's led us out of the hardest times before. And it's a perspective we can all rally behind right now."

Meanwhile, President Trump, in a press briefing Tuesday, said he was "a little surprised" by the pick, given Harris' attack on Biden in the Democratic debate.

Trump also slammed what he called Harris' "horrible" questioning of his Supreme Court nominee, Brett Kavanaugh, and her legislative record, saying she is "known as being about the most liberal person in the Senate."

Harris was born in Oakland, Calif., and grew up in Berkeley. She's the daughter of Jamaican and Indian immigrants, and attended Howard University in Washington, D.C., and the University of California Hastings College of the Law in San Francisco.

In 2016, Harris became just the second Black woman in U.S. history to be elected to the U.S. Senate. She was assigned to the Intelligence Committee, which held several nationally televised hearings on Russia's efforts to interfere in the presidential election, and how Trump's campaign and the Department of Justice responded to those efforts.

The longtime prosecutor also sat on the Judiciary Committee, which oversaw the confirmation of two U.S. Supreme Court justices: Neil Gorsuch and Kavanaugh.

How This Conservative Florida County Became A Surprise 2020 Battleground

The high-profile hearings that each committee held quickly helped Harris develop a national reputation as a sharp, aggressive questioner who could unnerve opposing witnesses. She generated headlines and energized progressives across the country with her questioning of Attorney General Jeff Sessions, Attorney General William Barr and, most notably, Kavanaugh.

In January 2019, Harris launched a bid for the White House. She was initially seen as a serious contender for the Democratic nomination, drawing more than 20,000 people to her kickoff rally in Oakland. But Harris struggled to articulate a clear reason for her candidacy in a crowded field, and her campaign experienced bouts of infighting.

Since returning full time to the Senate, Harris has played a lead role in Senate Democrats' response to both the coronavirus crisis, and the increased focus on systemic racism and police brutality.

Biden's pick came amid intense pressure from Democrats not only to pick a woman, which he promised to do in March, but also to pick a woman of color. That drumbeat began well before George Floyd's killing at the hands of Minneapolis police but intensified amid sustained protests across the country.

The only previous Black candidate on a presidential ticket, Obama, won the White House with Biden at his side in 2008.