Accessibility links
Beijing Attempts To Remake Hong Kong In Its Image As National Security Law Takes Hold Educators, journalists, political figures and ordinary citizens have been intimidated and even arrested as China moves to stifle protest and civil society with its new law. 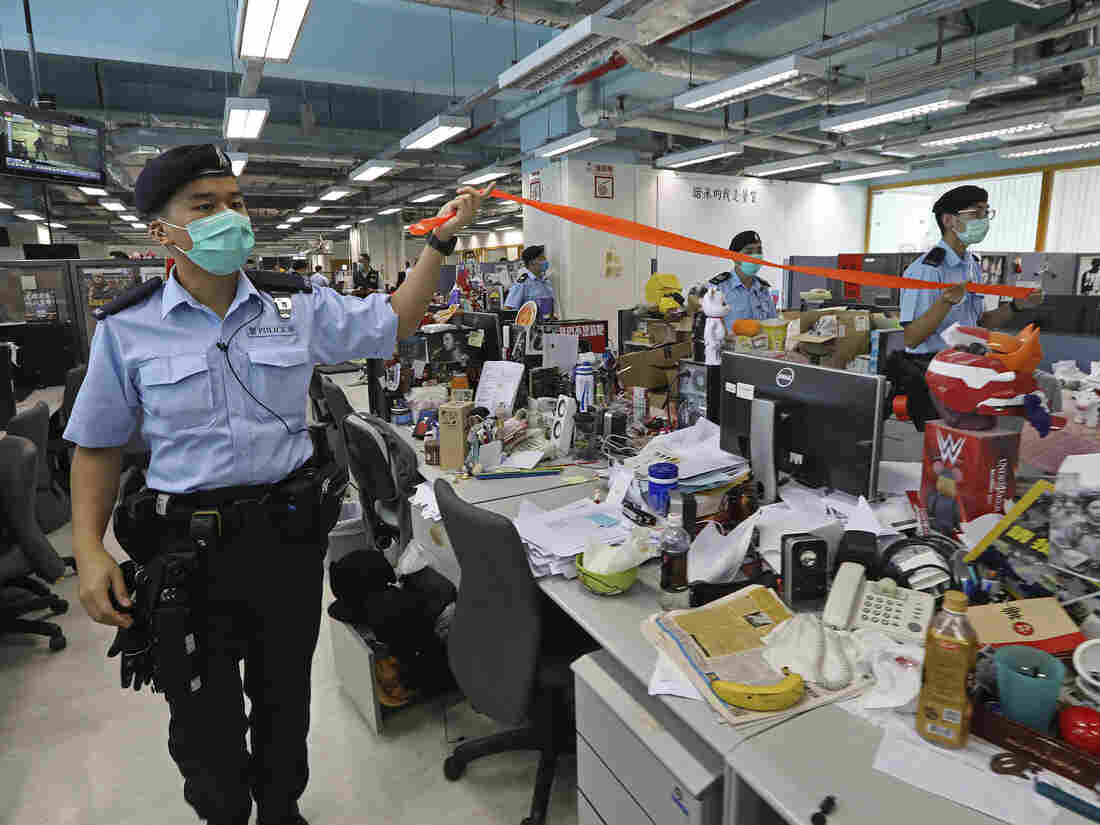 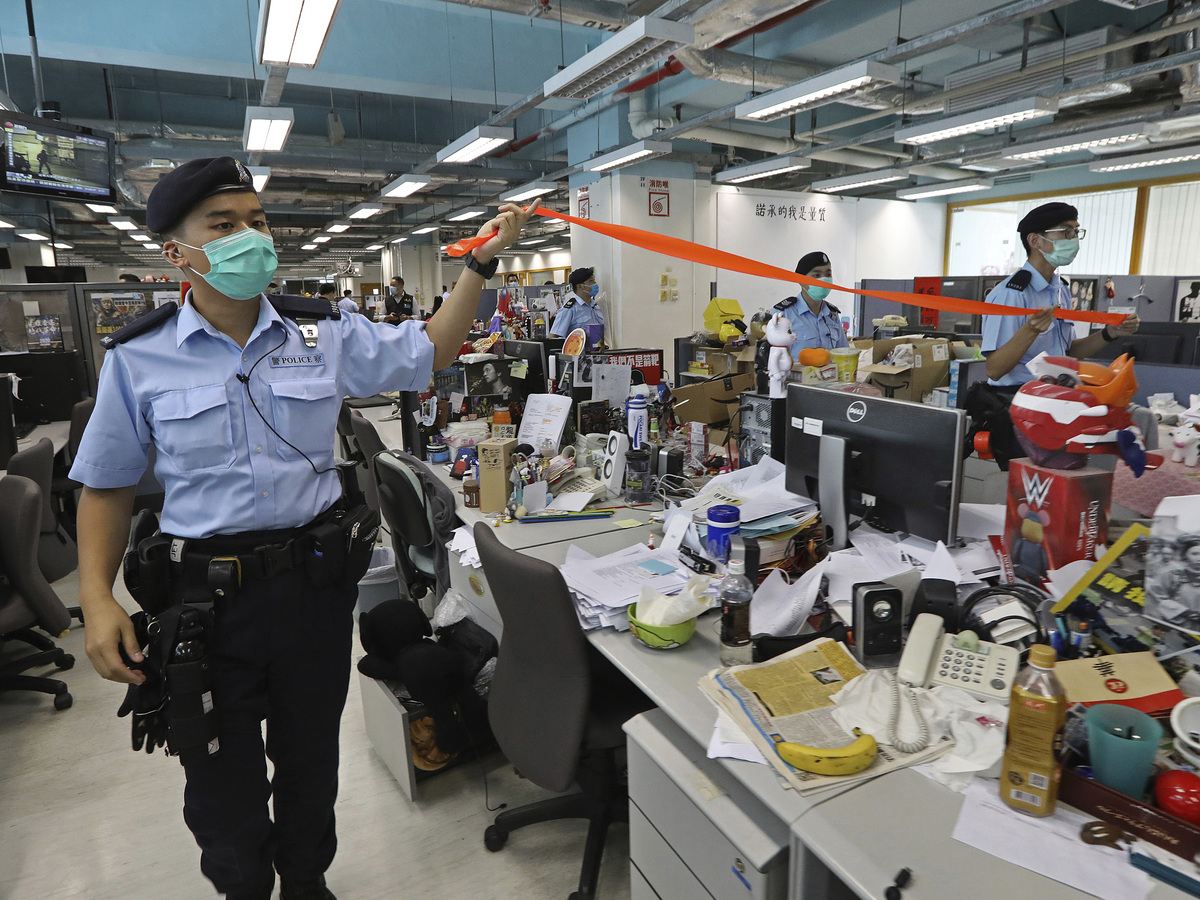 Just over a month after Beijing imposed a national security law in Hong Kong, authorities are targeting in rapid succession figures at all levels of Hong Kong's civil society and education sectors, despite assurances from Beijing officials and Hong Kong's top leader that the law would only be used to target a small minority of people.

The new law is notable for its sweeping extraterritorial scope. Beijing has long accused the United States and other Western powers of meddling in Hong Kong, and now it has a national security law to prosecute such cases, which include activist Samuel Chu.

Chu, a Hong Kong-born U.S. citizen, is now a fugitive wanted by the Hong Kong government.

"I found out from news reports," he told NPR. "It was quite a thing to wake up to in the morning."

Based in Washington, D.C., Chu lobbies American politicians to make it easier for Hong Kongers to move to the U.S. and costlier for China to limit Hong Kong's promised autonomy.

Under the new law, Chu and five others who live abroad are wanted on charges of secession and colluding with foreign powers — because the law applies to anyone, anywhere who commits offenses against Hong Kong.

"We are advocating and working with influencing our own government's policy towards Hong Kong and China," he said. "And so we have nothing to be afraid of. In fact, it's one of the most basic rights that I have as an American." 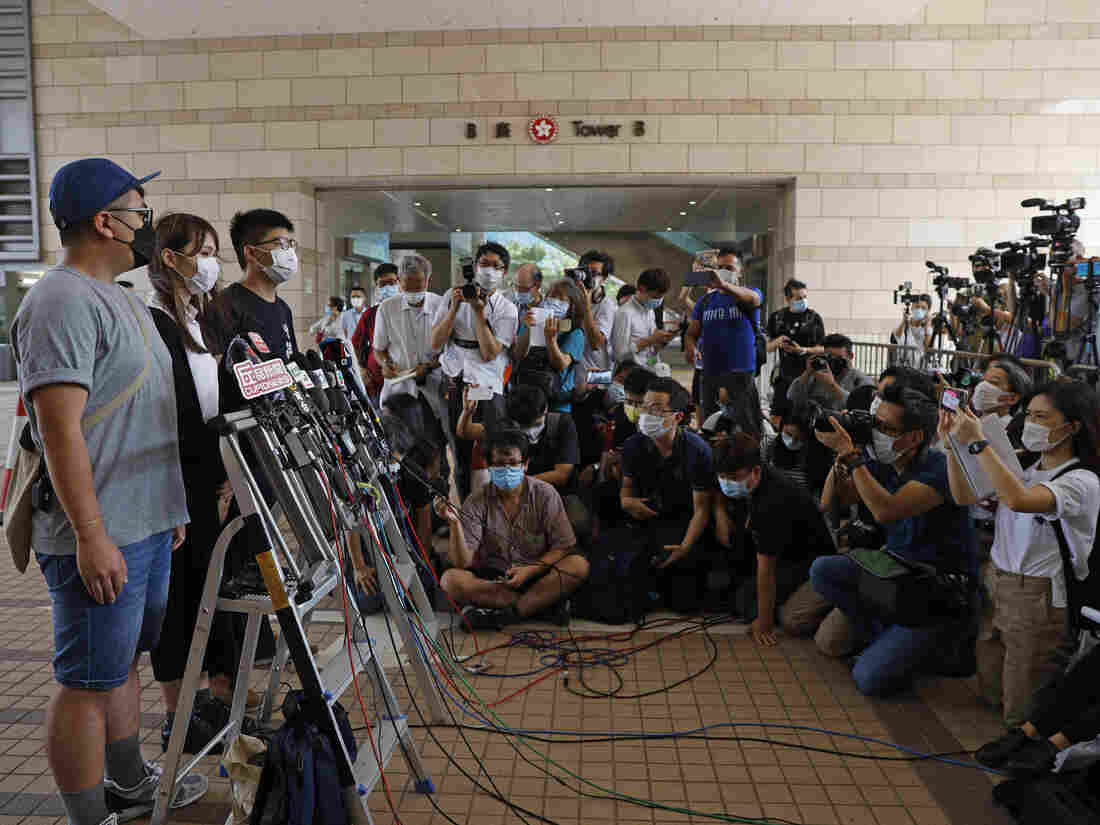 Pro-democracy activists (from left) Ivan Lam, Agnes Chow and Joshua Wong arrive at a Hong Kong court last week for sentencing after Chow pleaded guilty to inciting others to participate in an unlawful assembly, as well as to participating in an unauthorized assembly, related to protests in June 2019. Kin Cheung/AP hide caption 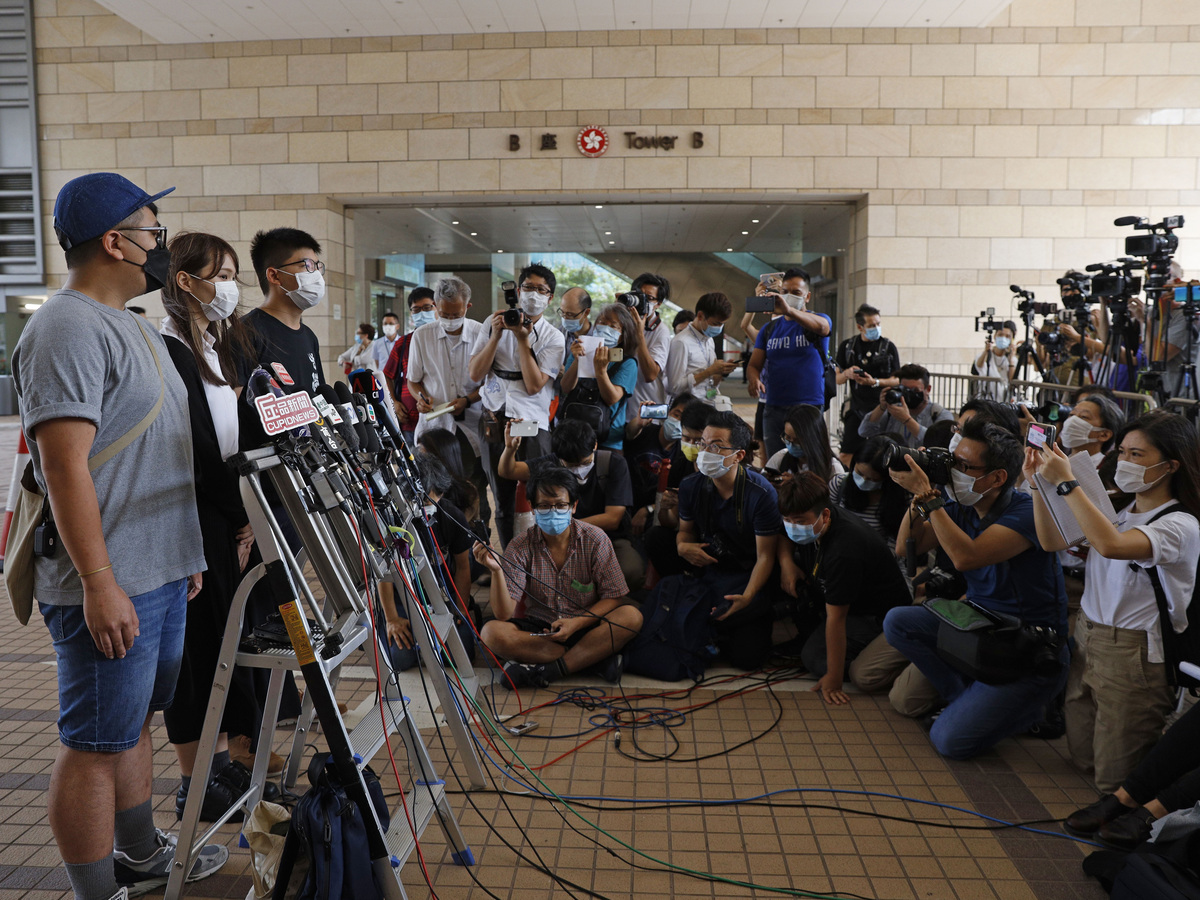 Pro-democracy activists (from left) Ivan Lam, Agnes Chow and Joshua Wong arrive at a Hong Kong court last week for sentencing after Chow pleaded guilty to inciting others to participate in an unlawful assembly, as well as to participating in an unauthorized assembly, related to protests in June 2019.

Other people targeted under the new law: Jimmy Lai, a Hong Kong media mogul and prominent pro-democracy figure, arrested along with his two sons and four employees this week; Agnes Chow, a young opposition activist arrested shortly after Lai, also for "colluding with foreign forces"; and 12 opposition politicians recently banned from running in legislative elections Hong Kong has now delayed by up to a year, after the city's chief executive Carrie Lam invoked emergency powers, citing the coronavirus pandemic.

Gwyneth Ho, a former journalist and now pro-democracy activist, was one of the candidates banned for, among other reasons, obstructing government proceedings.

"All the normal democratic proceedings that in the chambers, such as vetoing whatever laws that the government proposed or try to voice dissent," Ho told NPR, "we are now afraid that such behavior may be considered violating national security law, and they can put you in prison for simply performing your job as an opposition legislator."

A harsh focus on schools

"We will not be allowed to teach about civil disobedience [in the fall semester], but we are expected to teach about the national security law," said one secondary school teacher, whose principal put her under investigation after parents alleged that she described Hong Kong police as "riot police" to students in an online lecture. She was cleared after providing a video recording of the lecture, but she asked to remain anonymous because she still fears for her job.

The Hong Kong Professional Teachers' Union says in the last year nearly 200 teachers have had cases against them opened by the city's education bureau after anonymous individuals reported comments the teachers made on their private social media accounts in favor of anti-government protests. Benny Tai, a tenured professor, was fired last month from the University of Hong Kong after a university committee partially appointed by the Hong Kong government overturned a previous decision to let him continue teaching after serving a prison sentence for his pro-democracy activism.

"My anonymous accuser sent complaint letters to my workplace and shared [the complaints] online. They claimed to have sent the information to the Chinese Communist Party as well," says a second Hong Kong secondary school teacher currently under investigation by the education bureau for posting in favor of anti-government protests and insulting police last year on his personal Facebook account. If found guilty for violating conduct guidelines, he will be stripped of his teaching license.

"There is a sense of terror among teachers," says Fung Wai Wah, president of the teachers union, who is tracking the cases.

One professor who teaches at a Hong Kong university told NPR a course previously scheduled for the coming fall semester had been canceled due to concern it might violate the new law. The professor requested anonymity to protect the institution.

"They do want to have more control over the people's idea about the world and how to see the world and especially the younger generation," says Ip Kin Yuen, a pro-democracy lawmaker helping the teachers under investigation with legal assistance.

The city's formidably freewheeling press corps has also come under new constraints, because Hong Kong police can now conduct search and seizures without a warrant in the name of national security.

"Under 'exceptional circumstances,' no judicial scrutiny [of police activity] will be applied. The police may simply seize and examine and inspect all of the information on your mobile phone or any electronic device," explains Sharron Fast, a media law professor at the University of Hong Kong.

The city's public broadcaster underwent a review of its coverage after it was accused of being too critical of Hong Kong's police force. Emboldened by new powers granted under the national security law, police have been more forceful in stopping and searching journalists covering protests, say reporters.

The police's new national security powers also allow them to order Internet service providers to censor content. Facebook, Twitter and Google are some of the multinational technology companies that have said they will not comply with data requests under the new law.

Some technology companies have already decided to leave Hong Kong altogether. Justin Watts is engineering head at TunnelBear, which provides VPN services that shield a user's Internet traffic from prying eyes, in part by funneling that traffic through servers across the world. He decided to remove those VPN servers from Hong Kong after the national security law was enacted.

"If we look historically, encryption mechanisms that are secure today may not remain so tomorrow," says Watts. "When we're talking about search and seizure and an authoritarian regime having control to hardware, while we may not have any concerns at this present moment, we've seen in the past encryption schemes being entirely crippled."

Others have decided to stay after taking what they say are now necessary cybersecurity measures such as heavy encryption techniques to protect company data even if the Hong Kong police seize their physical hardware.

"We believe that leaving and abandoning Hong Kong without taking a stand, even a symbolic stand, and trying to fight some of these issues in court, is actually sending the wrong message," says Andy Yen, the founder and CEO of ProtonVPN, which also provides the encrypted email service Proton Mail. Proton will continue to operate servers in Hong Kong, Yen said, though the company decided last year to place its Asia headquarters in Taiwan rather than Hong Kong because of Beijing's growing influence over the latter.

Whether to stay or go, how to voice your true opinions without getting you or those close to you in trouble; these are everyday decisions Hong Kongers now face under the new national security law.

"Sometimes in order to do the right thing or to protect your immediate community, institution, or people around you, you become the agents of the regime or the system," says Rowena He, a history professor at the Chinese University of Hong Kong.

It's a dilemma those in mainland China already know well.