Accessibility links
In 'She Will Rise,' Former Rep. Katie Hill Aims To Encourage Women To Run For Office Hill's election to Congress in 2018 seemed like a sign of progress. A year later, she resigned after admitting to an affair with a young staffer, documented by her husband, and leaked to the press.

Former Rep. Katie Hill Aims To Encourage Women To Run For Office In 'She Will Rise'

Former Rep. Katie Hill Aims To Encourage Women To Run For Office In 'She Will Rise' 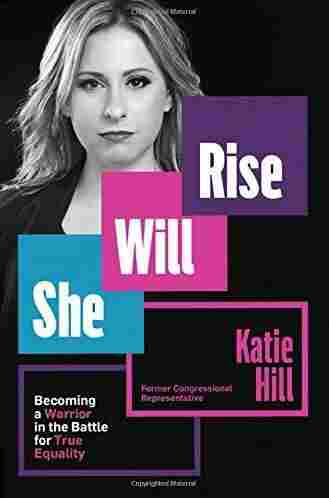 She Will Rise: Becoming a Warrior in the Battle for True Equality, by Katie Hill Grand Central Publishing hide caption

In her 2019 resignation speech, then-congresswoman Katie Hill said: "I am leaving because of a misogynistic culture that gleefully consumed my naked pictures, capitalized on my sexuality and enabled my abusive ex to continue that abuse, this time with the entire country watching."

She also could have said: I am leaving because I had an affair with a subordinate. Both statements would have been true.

Hill's election to Congress in 2018 seemed like a sign of progress. She was young, female and openly bisexual. She had flipped a seat held by Republicans for decades. She was a part of a class of rising female stars that included Alexandria Ocasio-Cortez and Lauren Underwood. But her rise was nothing compared to her fall: Less than a year after entering office, Hill resigned after admitting to a polyamorous affair with a young staffer, which was documented by her husband and leaked to the press (she says he did it as part of a pattern of abuse — he claims he was hacked).

Hill's new book She Will Rise: Becoming a Warrior in the Battle for True Equality begins around the time of Hill's resignation. "Most people have nightmares of being trapped somewhere in the nude, trying to escape. In the days leading up to my resignation, that nightmare became my every waking hour." She says she considered suicide.

In the time since this low point, and no longer a politician herself, Hill has decided to marshal her energy into urging other women to run for office. She Will Rise becomes a reasonably convincing, if personally unreflective, battle plan for getting more women elected.

In that 2019 resignation speech, Hill called out a "double standard" for men and women:

"I'm leaving, but we have men who have been credibly accused of intentional acts of sexual violence and remain in boardrooms, on the Supreme Court, in this very body and worst of all, in the Oval Office."

Hill is right, of course. But her book, despite many references to "imperfections," also makes it clear she thinks her conduct was not especially serious. In a section explaining her decision to step down, she writes:

"[A]t a time when women are finally publicly calling out the men who have wronged them, we've had to swing completely to the other extreme and hold people accountable for any transgression whatsoever just to finally achieve some balance."

Apart from an opaque reference in the acknowledgments, there is little consideration for the young staffer whose life was also upended by the leaked photos. As a 20-something woman famous only for an affair with her boss, she gets no book deal, no rehabilitation campaign, no profiles in newspapers. "[A]ny transgression whatsoever" doesn't seem to cover that damage.

Hill's tone, light and Twitter-inflected, often jars: "Let's all take a moment to compose ourselves after heavily fangirling over Aunt Susan," Hill writes at one point after a brief summary of the accomplishments of Susan B. Anthony.

Attempts to correct sexism by claiming women are in fact better than men are also neither flattering nor convincing. Nor do we need inane encouragement along the lines of "women are awesome at being in charge, just like we are at everything else," as Hill puts it.

But Hill's aim is to encourage more women to run for office, and the book does a fair job of laying out some of the barriers and obligations this involves. There is also a satisfyingly concrete list of legislative measures to address problems stemming from sexism, along with their status in Congress. These are nested, though, in confused platitudes about female empowerment.

Maybe this isn't surprising: Jessica Bennett, in a sympathetic New York Times profile of Hill, notes that the book was written in three weeks.