Accessibility links
Trying To Fund, And Found, A Venue For 'Radical Freedom Of Expression' In Minneapolis Three longtime members of the Minneapolis music scene are trying to start a new venue aimed at fostering art from marginalized communities there.

Trying To Fund, And Found, A Venue For 'Radical Freedom Of Expression' In Minneapolis

Trying To Fund, And Found, A Venue For 'Radical Freedom Of Expression' In Minneapolis 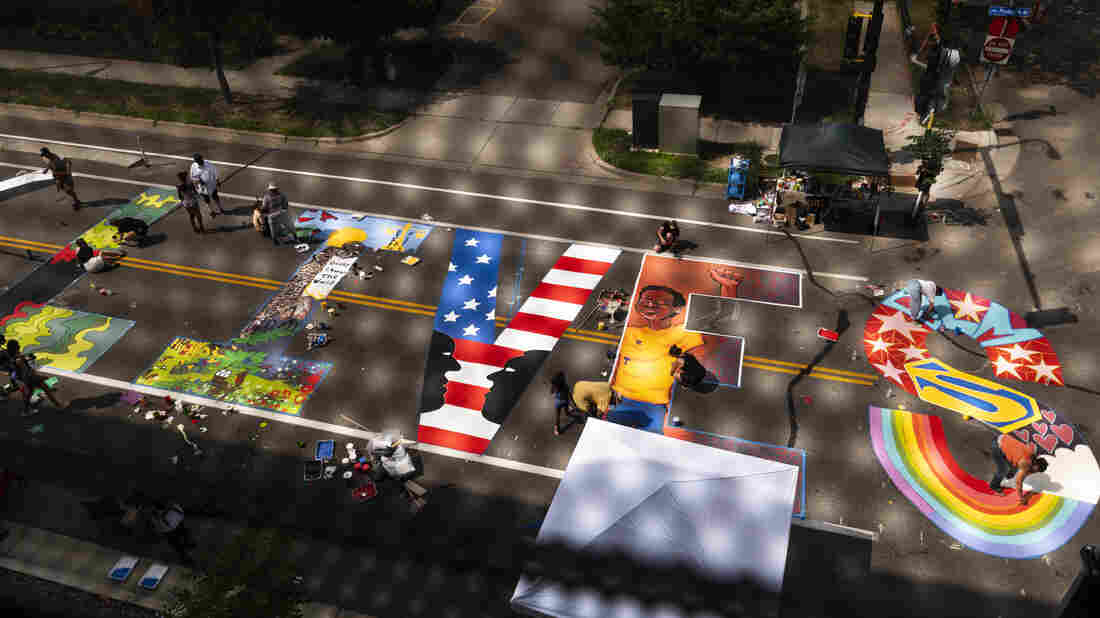 A Black Lives Matter mural, being painted on the street outside the Minnesota African American Heritage Museum and Gallery on July 18, 2020 in Minneapolis. Stephen Maturen/Getty Images hide caption 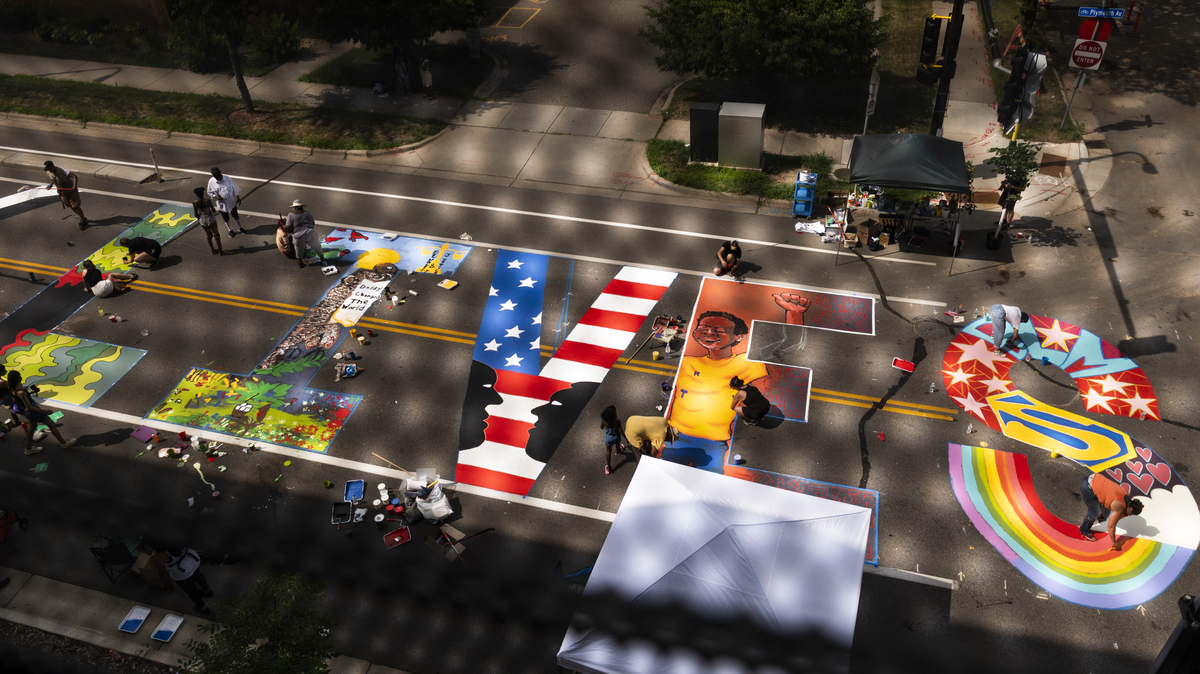 A Black Lives Matter mural, being painted on the street outside the Minnesota African American Heritage Museum and Gallery on July 18, 2020 in Minneapolis.

Amid the turmoil that followed the murder of George Floyd in South Minneapolis, a history of harassment and abuse in the Twin Cities music scene was exposed by its survivors on social media. In response, three female musicians of color here, announced plans to open a music venue that better represents and serves the community.

Established Minnesota musicians Sophia Eris (Lauren Alford), Lady Midnight (Adriana Rimpel) and DJ Keezy (Akeena Bronson) have come together to announce their intention to establish Auntie's, "a venue owned by womxn of color rooted in radical freedom of expression without judgement," according to a statement. The trio has launched a GoFundMe with a goal of $5 million, currently sitting at just over $68,000.

Auntie's will aim to be "a safe space that presents performance, fosters healing, and provides professional knowledge."

"We want to be more than just a venue," Sophia Eris tells NPR Music. "We want to be a resource, because also, as a performer, it's so nice being able to learn tactics about your performance and your skillset."

How Live Music Is Coping, And What The Near Future Will Bring

The venue plans to be open during the day to hold professional seminars and panels on topics like lighting design, running sound and how to navigate the music industry. The plan is to partner with nonprofits and educational institutions to facilitate programming out of the venue during the day.

"It's not necessarily that people are outright trying to be disrespectful or dismissive of me," Lady Midnight tells NPR Music of the need for a space like Auntie's. "I think that they just don't have a practice of understanding — that the needs that a female artist of color goes through are different than maybe white men."

Attempting to create an inclusive environment is not a new idea for DJ Keezy, who started a series of events, called The Klituation, that exclusively features women and LGBTQ+ performers. The series began in smaller spaces, but as its popularity increased the events began to sell out larger spaces, like First Avenue. And, despite the success, some of those venues became an issue.

"For me, it's the disconnect between the people that throw the events and the venue," DJ Keezy says. "They hold a major energy... Sometimes it's very disrespectful."

The trio mentioned things such as not having a space for artists to retreat to; staff and security being disrespectful and talking down to them; unfair compensation, and not allowing for women of color to surround themselves with a community that allows them to feel safe.

Auntie's hopes to address those issues by staffing the space with mainly women, BIPOC, and LGBTQ+ folks, and maintains a commitment to paying employees a living wage. Further, Auntie's plans to bring in professionals from the mental health field, sexual abuse agencies, entertainment industry and community members.

But between buying a space, offering educational opportunities, hiring staff and marketing the venue, Auntie's start-up costs are substantial, even with a grant writer helping direct them towards the right applications. And if its $5 million GoFundMe is reached, the venue will still have a pandemic to deal with. In an interview with the Star Tribune, Dayna Frank, the owner of First Avenue, said that during a call with other Minnesota venue operators, there was consensus that "their break-even point was at least 50% capacity, and more like 75%." Minnesota Governor Tim Walz's phased plan for re-opening the state has music venues listed as the last thing to open up again, which could be 18 months from now.

Venues like First Avenue are pushing for Congress to pass the Save Our Stages Act, a bill co-authored by Minnesota Sen. Amy Klobuchar and Sen. John Coryn of Texas, that aims to provide six months of support for independent venues to cover operation costs like rent and staff pay. However, it's unclear if Auntie's would qualify as the bill is meant to cover costs incurred during the Covid-19 crisis and Auntie's is not yet open.

The trio is aware that $5 million is a lot of money to raise, but to them it's a matter of establishing an enduring cornerstone in the community. "It's important to our mission that we have something that is a legacy, that we can leave to communities of color," Lady Midnight says.

The news of the venue's ostensible opening was largely received positively, garnering tweets of endorsement from musicians both in the Twin Cities and nationally. But there's also been some criticism. There concerns that artists like Eris, Midnight and Keezy, who are deeply ingrained in the Twin Cities music scene, shouldn't be the ones leading a call for radical change. Some have cited the founders' involvement with hip-hop label Rhymesayers, which was recently called out for creating a culture of misogyny through its association with artists like Prof, who was dropped from the label over misogynistic lyrics, and Dem Atlas, who was dropped over abusive behavior. Others point to Sophia Eris' connection with Go 95.3, a local hip-hop station where she served as morning show host until last year. "Y'all are saving face and trying to save your careers... the truth is y'all need to move out of the way," the local artist Booboo wrote in a tweet.

Yonci Jameson, a local radio host for KFAI, said: "Not only is colorism at play w/ the folx organizing" — Sophia Eris, Lady Midnight, and DJ Keezy are all light-skinned women of color — "but some of them have yet to address their involvement w/ rhyme sayers and other contradictions."

"We have an understanding of how the industry works at various levels because of our career, but we're not interested in recreating the industry here," Lady Midnight says. "We empower everybody to take leads in the movements that they see themselves in... If they are like 'there's no way Auntie's is gonna represent me' we want them to build spaces that represent them. And they can work with us or not, but we still support it."

Auntie's is gathering emails to establish two-way communication with community members. "Before we tell you what it's going to be, we need the community to tell us what they need," Lady Midnight said.

There is no set date for an opening, but they're aiming for some time next year. "For us, we're really just taking our time with it and making sure that we're listening to the community," says DJ Keezy.