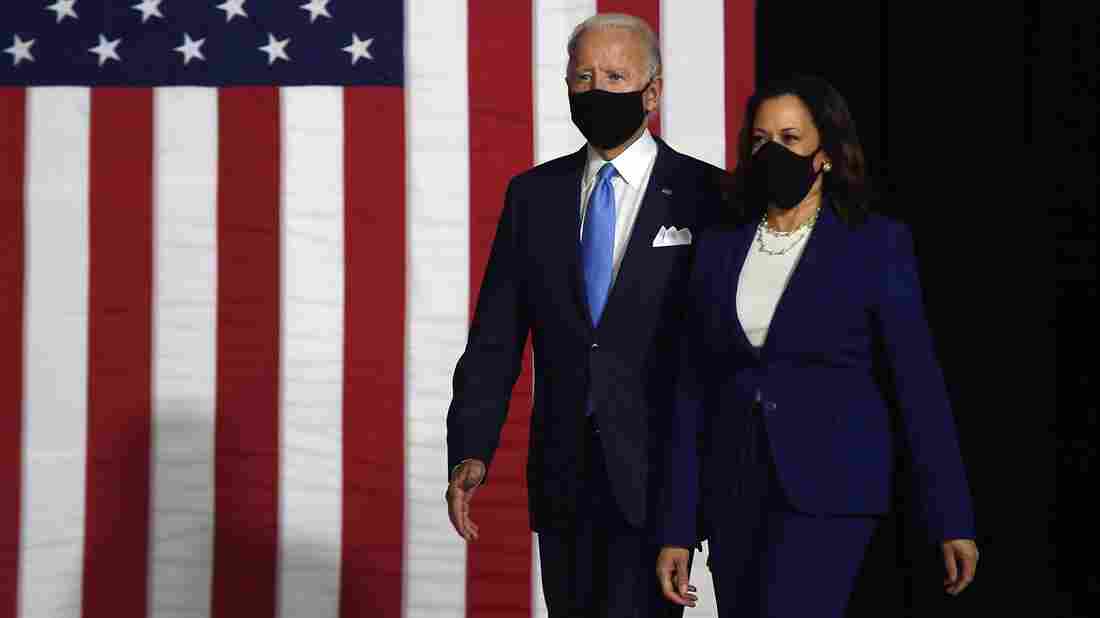 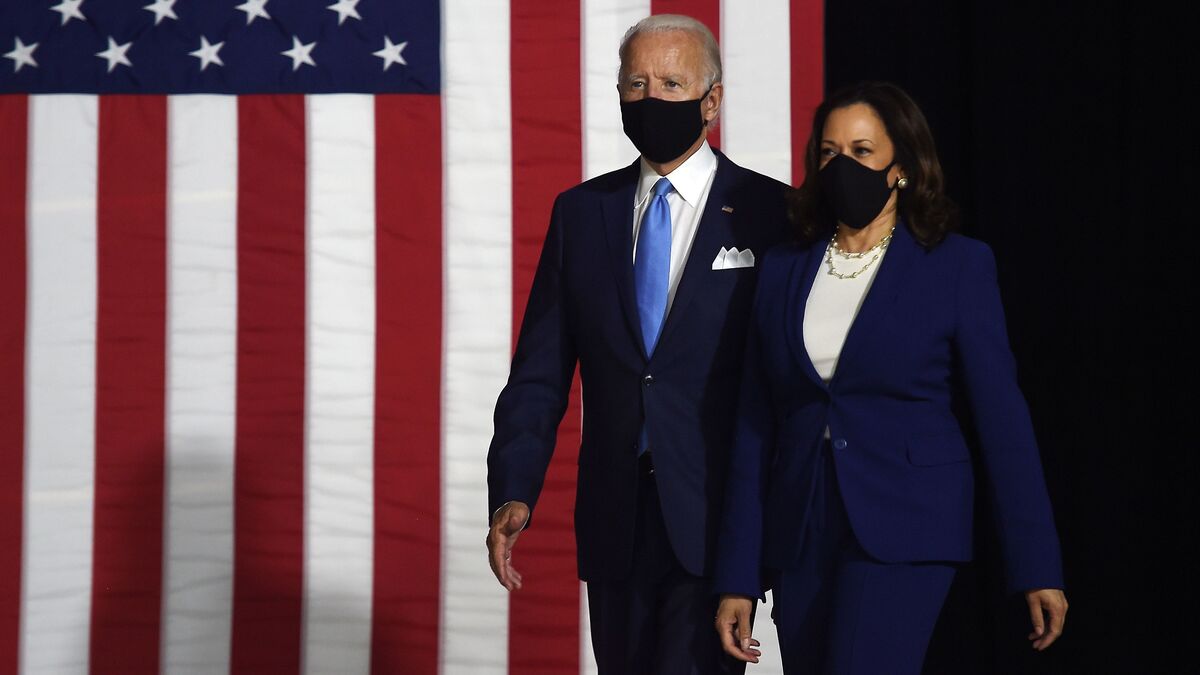 "I have no doubt that I picked the right person to join me as the next vice president of the United States of America," Biden said in scripted remarks at a high school in his hometown of Wilmington, Del.

Amid the coronavirus pandemic, an introductory rally in front of throngs of supporters is not possible. Instead, the two walked out wearing masks, and one person sat several feet away as the other spoke.

Harris is the daughter of Jamaican and Indian immigrants, and Biden's choice will make her the third woman — and first woman of color — to be nominated for vice president by a major political party.

"This morning," Biden said, "all across the nation, little girls woke up, especially little Black and brown girls who so often feel overlooked and undervalued in our communities, but today, today just maybe they're seeing themselves, for the first time, in a new way — as the stuff of presidents and vice presidents." 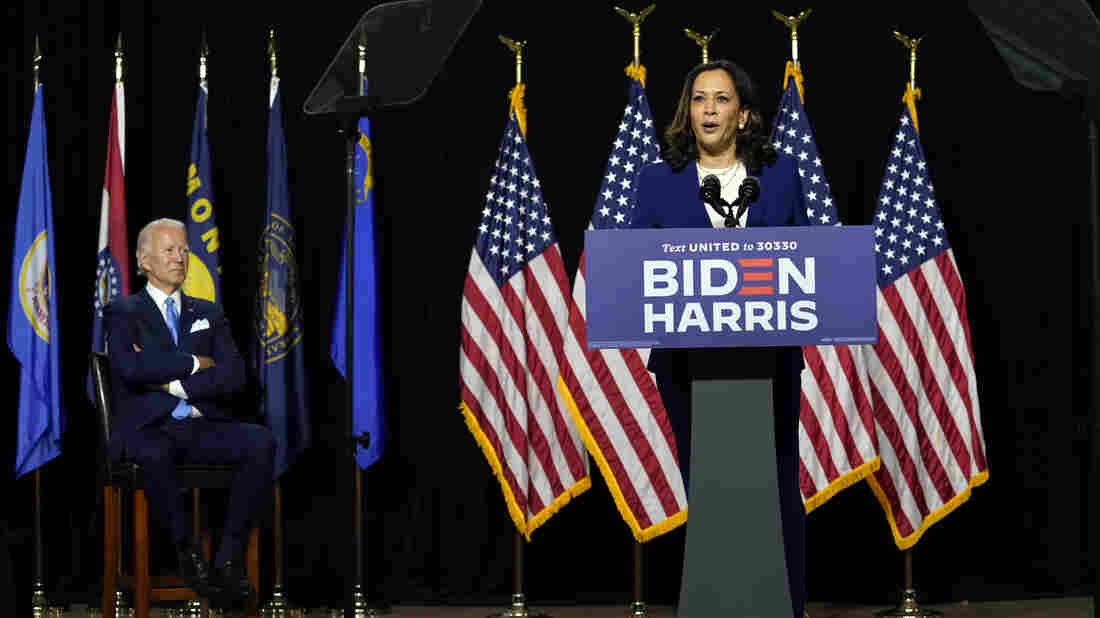 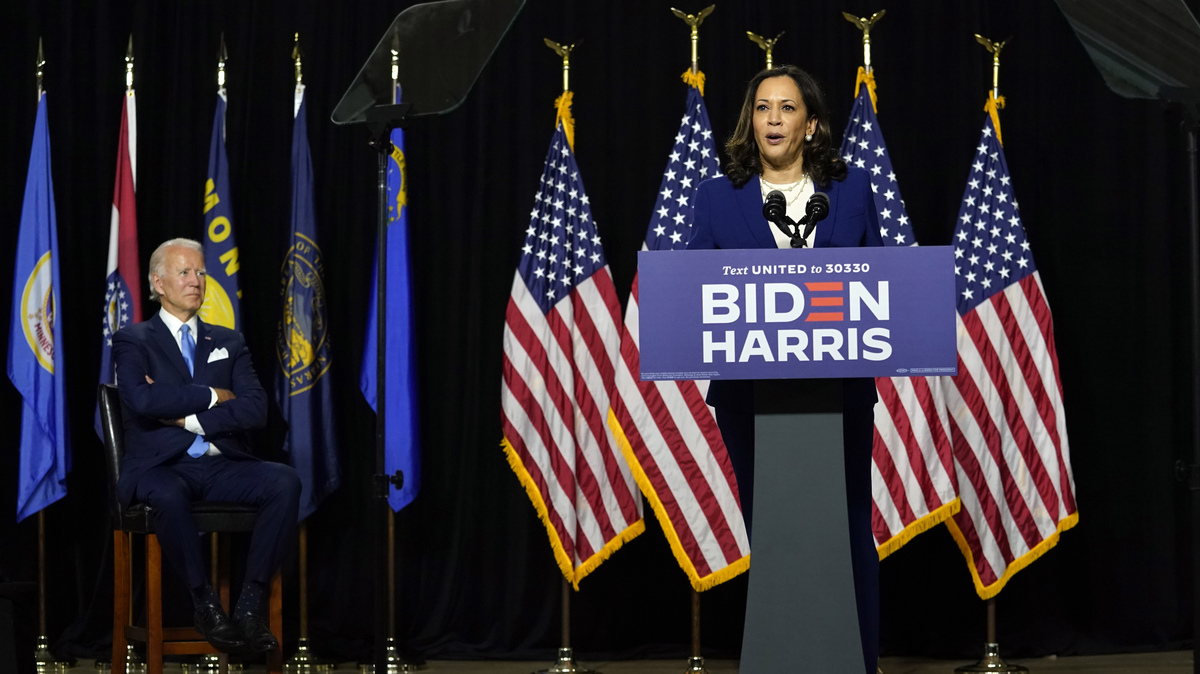 Biden listens as Harris speaks during their introductory event Wednesday at Alexis I. duPont High School.

Biden criticized President Trump's personal attacks on Harris. Trump called Harris "nasty," and Biden said Trump is "whining about how she's been 'mean' to his appointees."

Biden added: "It's no surprise because whining is what Donald Trump does better than any president in American history."

The former vice president launched into remarks that closely mirrored his stump speech in which he talks about the need for a better coordinated federal response to the pandemic and a revitalized economy.

Biden noted the day marked the third anniversary of the racist violence in Charlottesville, Va., which he says caused him to decide to run for president to wage "a battle for the soul of the nation."

In her first remarks since being announced as Biden's running mate, Harris said she was mindful of the "heroic and ambitious women before me," using a word that had reportedly been levied against her as a critique.

She recounted her experience as a prosecutor and said the "case against Donald Trump and Mike Pence is open and shut."

"We need more than a victory on Nov. 3; we need a mandate that proves the past few years do not represent who we are or who we aspire to be," she said.

She also talked about the special relationship she formed with Biden's late son, Beau, whom she worked with when he was Delaware's attorney general.

"Ever since I received Joe's call, I've been thinking ... about the first Biden that I really came to know," she said, describing how during the Great Recession she and Beau Biden would sometimes speak multiple times a day.

"Beau was the kind of guy who inspired people to be a better version of themselves," Harris recounted. "He really was the best of us. And when I would ask him, 'Where'd this come from?' he'd always talk about his dad."

Joe Biden, meanwhile, referred to Harris, her husband, Doug Emhoff, and their children as "honorary Bidens."

In a tweet earlier Wednesday, Biden shared a video that documents the moment he asked Harris to join the ticket, asking, "You ready to go to work?"

.@KamalaHarris is the daughter of proud immigrants—a mother from India and a father from Jamaica—who raised her to take action.
That’s exactly what this moment calls for: action. And we hope you’ll take action with us: https://t.co/K3mVwfTxXJ pic.twitter.com/MZLAx9IN6C

Trump, in a press briefing Tuesday, began his criticism of the new vice presidential candidate, calling her the "most liberal person in the Senate."

In a statement Wednesday, the Trump campaign blasted Harris for pushing "Biden even farther to the left than he had already moved" and that "Joe Biden and Kamala Harris together make up the most extreme, leftist ticket in American major party history."

She gained national attention during the televised Senate hearings for Brett Kavanaugh's confirmation to the Supreme Court and Russia's efforts to interfere in the U.S. presidential election. Harris ran for president but bowed out in late 2019.

Another onetime Democratic candidate, Sen. Amy Klobuchar of Minnesota, told Here & Now on Wednesday that she spoke with Harris a day earlier.

"I can't wait to see what they will do together, not just as a ticket, but what she will bring to the office of vice president, working side by side with Joe Biden. She knows how to govern," Klobuchar said.

The process of selecting Biden's running mate was extensive. The original list of contenders had more than 20 names on it. Co-chairs from Biden's selection committee met with every candidate, asking them about their vision and agenda — and even what they anticipated Trump's nickname for them to be. The initial list was narrowed to 11 women who were then deeply vetted by a team of lawyers.

"Vice President Biden's focus from the very start was on who would be the best governing partner to help him lead our country out of the chaos created by Donald Trump. Senator Harris is the right person to join Joe Biden in bringing our country together and restoring the soul of the nation," read a joint statement from the Biden campaign's selection committee.

Biden and Harris will formally accept the nominations during the virtual Democratic convention, which is scheduled for next week.

During his remarks, Biden shared that his campaign set a single-day record for online political fundraising, "and I think I know why," he said, smiling at Harris.

Later Wednesday, at a joint virtual fundraiser, Biden said the campaign had raised $26 million over the past 24 hours.