Accessibility links
In The Wake Of George Floyd's Death, 59 Confederate Symbols Brought Down America's reckoning with racism has brought down statues, one state flag and one police emblem, according to the Southern Poverty Law Center — and led to the renaming of schools and other sites. 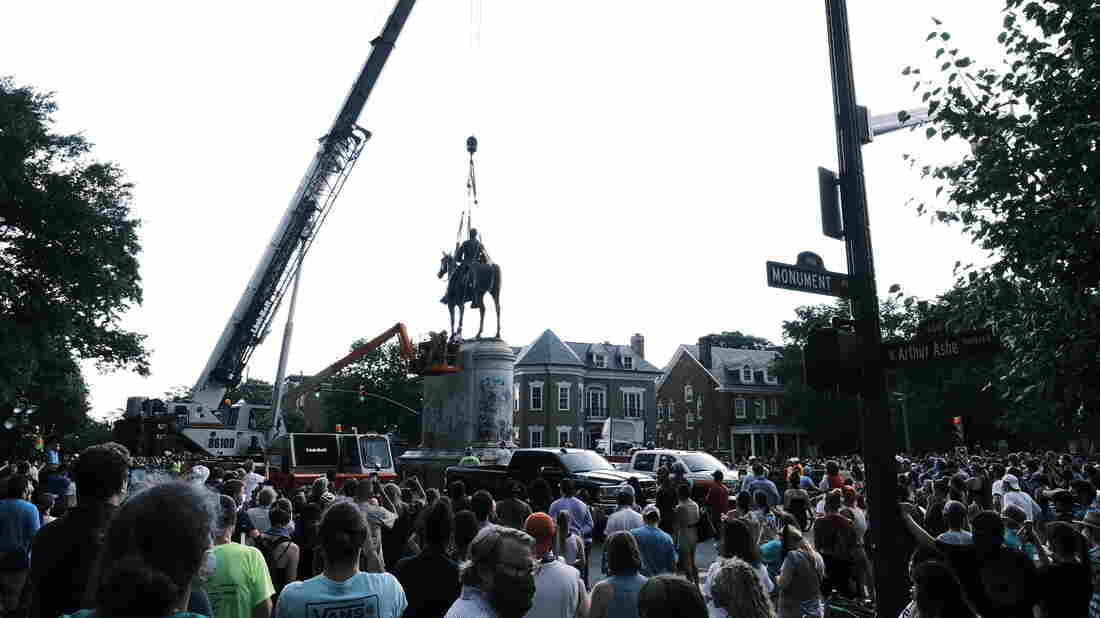 A crowd watches as a crane removes the Stonewall Jackson Monument in Richmond, Va., on July 1. Dozens of Confederate monuments have come down this summer. Eze Amos/Getty Images hide caption 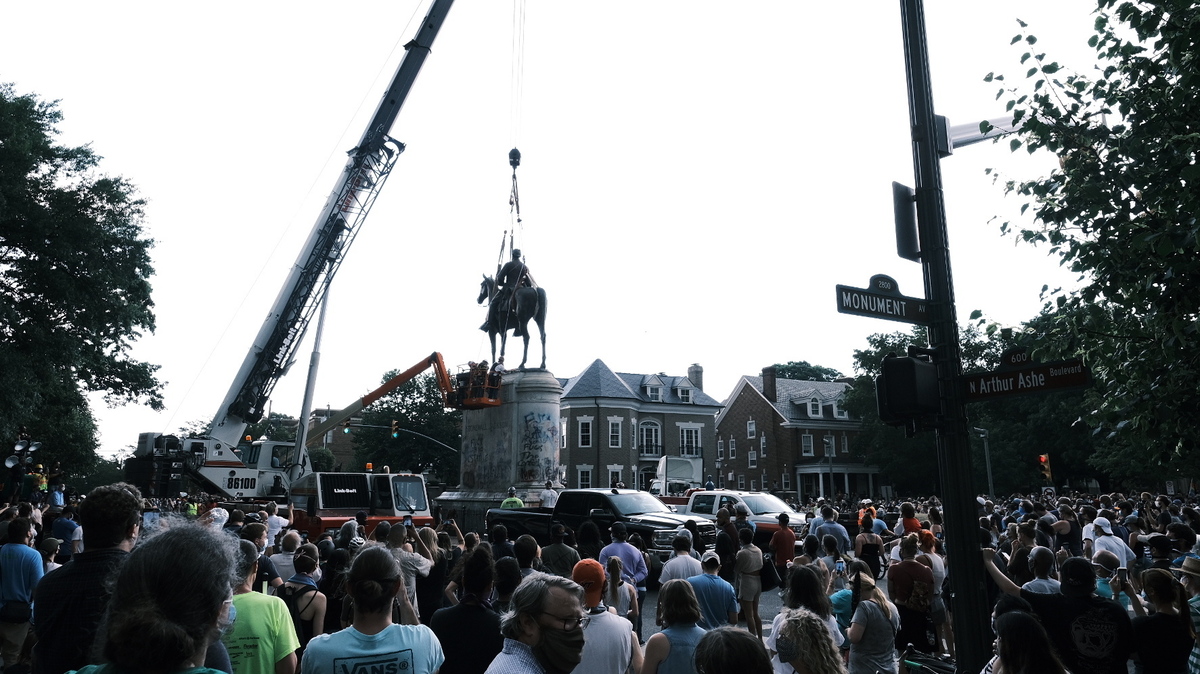 A crowd watches as a crane removes the Stonewall Jackson Monument in Richmond, Va., on July 1. Dozens of Confederate monuments have come down this summer.

After George Floyd was killed by police in Minneapolis in late May, waves of anguished and outraged Americans took to the streets, to livestreamed city council meetings and to social media to denounce racism.

Protesters called for police reform, defunding or outright abolition; for an end to qualified immunity for officers; for reinvestment in underfunded communities; for schools, companies and communities to address their own complicity in racial inequity.

And they called for Confederate monuments to come down.

Some changes are hard to quantify. But that last one is easier to count.

Some statues have been literally brought down by protesters, while other symbols were removed by local governments or institutions in response to the outcry.

The Fight Over Confederate Statues, And How They Could Tell Another Story

Confederate Figures Removed From Virginia Capitol In The Dead Of Night

All told, 38 Confederate monuments were taken down this summer, and five more relocated, while 16 schools, parks and other locations were renamed.

'Somebody Knew Them': New Monument Will Honor '(Un)Known' Enslaved People

Confederate symbols are not the only ones that have come down as the nation turned renewed attention to symbols of bigotry.

In La Crosse, Wis., a statue of Hiawatha is being removed; local community members had long objected that the statue misrepresented Indigenous people. The Washington, D.C., football team will no longer use a racial slur for its team name. Statues of Christopher Columbus have been pulled down in multiple cities by critics characterizing them as monuments to violent colonization.

Boston has decided to remove a statue of Abraham Lincoln, commemorating emancipation, from Park Square, because of what Mayor Martin Walsh called a "reductive representation" of a kneeling black man. The original of that statue stands in Lincoln Park in Washington, D.C.; it was funded largely by former enslaved people and has prompted local debate about what the monument symbolizes today.

The societal shift has stretched outside of America, too. In the U.K., a statue of a slave trader came down. In Belgium, monuments to King Leopold II, who brutally exploited the Congo, have been targeted. And the Netherlands is reevaluating "Black Pete," a racist Christmas character.

Even some uncontroversial monuments have been toppled, at least temporarily. A statue of Frederick Douglass was torn down by unknown vandals in Rochester, N.Y., and has since been replaced, while monuments to women's suffrage and abolition were torn down by protesters in Madison, Wis., with plans to replace them.

But the Confederate icons have received the most attention, in part because they are so widespread across the U.S. and have been the subject of many years of high-profile protest.

Critics of the monuments point out that most of these tributes to a defeated pro-slavery secessionist movement were erected well after the Civil War, either in the dawn of the Jim Crow era or at the height of the civil rights movement. Defenders of these monuments have said that removing or relocating them is an assault on history itself.

"Nearly 1,800 Confederate symbols remain on public land," The Southern Poverty Law Center writes in the updated report. "725 of those symbols are monuments."

The center has long been known for its work monitoring hate groups. But some conservative organizations have strongly objected to the SPLC designation of them as hate groups alongside neo-Nazis and the Ku Klux Klan.

In addition, the Southern Poverty Law Center has faced controversy over its own practices. Last year, allegations surfaced that the center had a toxic culture that discriminated against women and people of color. After these allegations were made public, the SPLC co-founder was fired, and its president and legal director resigned.