Accessibility links
'Fall Guys' Is Candy-Colored Fun If you're stressed out by battle royale shooter games like Fortnite, you and your friends may enjoy steering the jelly-bean-esque characters of Fall Guys around an array of goofy obstacle courses. 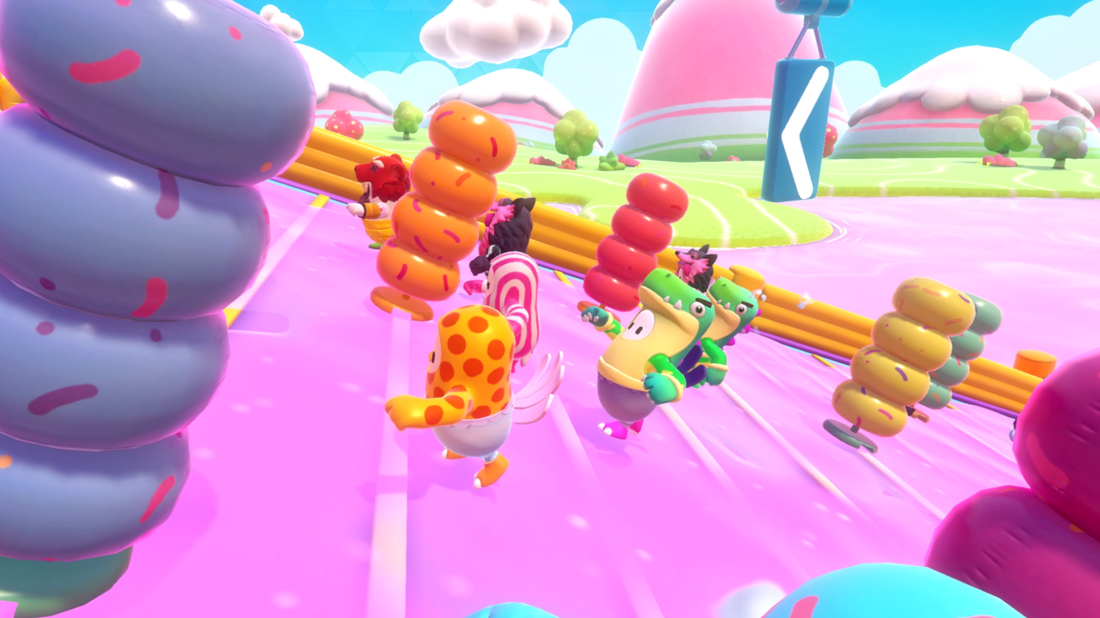 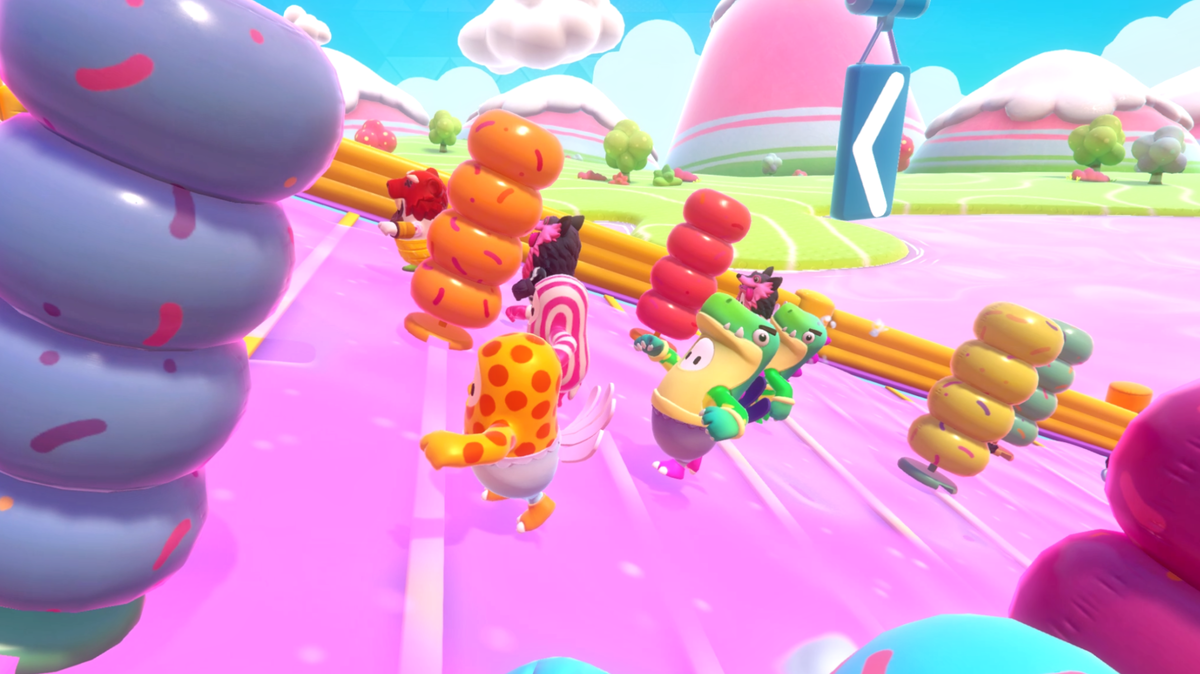 The fun of Fall Guys comes in watching its little jelly bean-shaped characters getting whacked around goofy obstacle courses.

When you think of the battle royale genre in video games, you'll probably think of Fortnite. In Fortnite, a group of 100 players parachute from a plane, land on an island, and the last person standing wins.

I was never the biggest fan of games like that. First of all, I'm not great at shooters; my aim is bad and I panic when people sneak up on me. It's just no fun when you spend a lot of time setting yourself up in the perfect spot — and you still don't stand a chance, because everybody else is much better at aiming and, you know, not panicking.

Luckily for me, there's Fall Guys. It's a brightly colored battle royale party game where up to 60 players control jellybean-like characters and race through minigames like insane obstacle courses and team events. Players get eliminated every round until there is one winner.

Pretty much anybody can pick up Fall Guys and start playing. But despite the extremely easy controls and instructions, it's not so easy to win. And it gets super competitive.

I've been playing Fall Guys nonstop since it has been released, and I'm surprised my neighbors haven't filed a noise complaint about me screaming excitedly at the screen. This game is just pure, goofy, competitive fun that keeps you coming back again and again. I look forward to playing it every day.

'Fall Guys' is fun even if you don't win, because it's not about winning. It's about watching jelly beans in owl costumes get whacked around.

One particularly wild obstacle course has you and a swarm of other beans running and balancing across rows of brightly colored see-saws to the finish line, and it's so easy to make a mistake and slide off. Another minigame is called "door dash," and in it, swarms of players break through rows of doors to the finish line — but some won't break.

There are also team rounds.One level features a giant pile of eggs in the middle, and the team with the least eggs in their zone when time's up is out. Another is sort of like a soccer game, but with two balls, and whichever team scores the most points wins.

It's a blast to play by yourself, and it's even better to play with your friends. Playing with friends gives you an advantage during team games because you're always paired up with them. Up to four people can play together at once — but be aware there's no local multiplayer, so you can't play with somebody in person unless you both purchase the game separately. 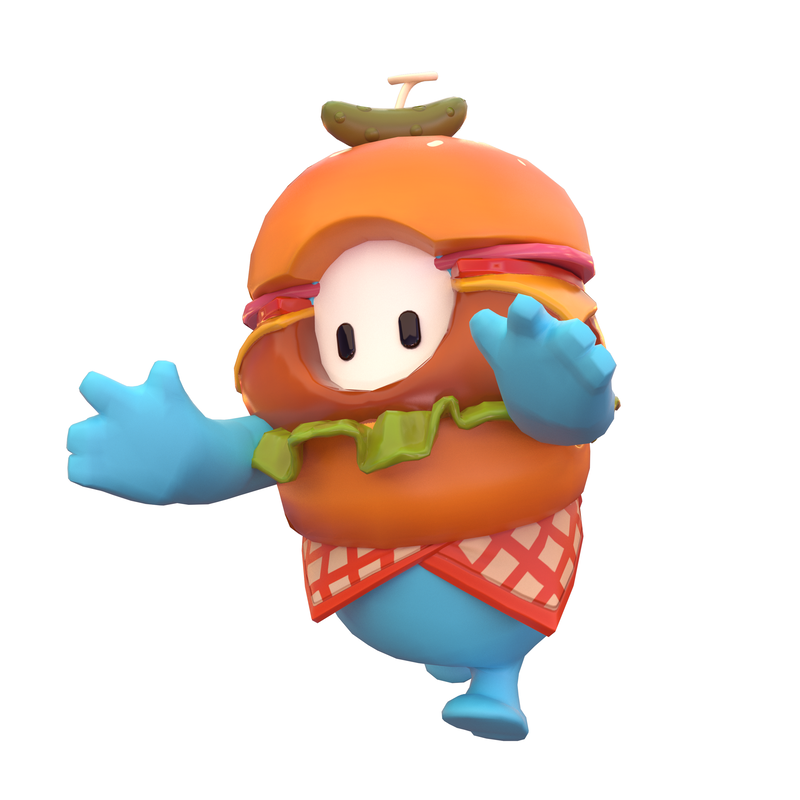 This hamburger costume was worth the five real-life dollars. Mediatonic hide caption

To make Fall Guys even more adorable, you can dress up your blobby racers in fun costumes that you unlock through gameplay and leveling up — and of course, through your wallet. (Yes, I spent five real-life dollars to buy a fast-food costume so my bean man can be a burger. It brought me joy, so I did it.)

There are new costumes for sale in the shop every day, and there are special ones that rotate every three days. Every season of the game has new gear you get through leveling up over the course of a few months, and then it's gone forever. There are also special costumes that you can only buy with crowns, a currency that you can't even purchase with real money. You need to win games to get them, and you get a handful from leveling up.

I haven't won first place yet, but that doesn't really matter, even though I'm missing out on cool costumes that you can only get by winning games. Fall Guys is fun even if you don't win, because it's not about winning. It's about watching jelly beans in owl costumes get whacked around.

But there are some annoyances with Fall Guys. The game has been plagued with connection problems since its release, though developer Mediatonic is working to fix that. Fall Guys has been a huge hit, and Mediatonic clearly wasn't ready for its popularity; I get disconnected from races fairly often, and there have been times where the game servers go down for hours.

And the minigames do start getting repetitive after you've been playing for a few hours. There are just over 20 minigames in total, and you cycle through them quickly. Fall Guys has the potential to be a long-lasting hit, as long as developers keep adding new content to mix things up — something Mediatonic says they're planning on doing.

Jump Showdown - A fan-favourite from the beta! 👑

We'll be adding it in our first update TOMORROW!

More new levels will be coming soon - along with new features & costumes 👀 pic.twitter.com/zQ4hOI70MP

New costumes, too! This makes me really excited for the future of Fall Guys, despite a few hiccups at launch.

I see myself having a blast with this game for a long time to come, and for $20, you can't go wrong.