Accessibility links
Georgia Republican Linked To Q Conspiracy Theory Poised For Congress The QAnon conspiracy theory's rapid spread and entry into politics are raising alarms. Georgia is poised to become the first state to elect someone to Congress who has openly supported the theory. 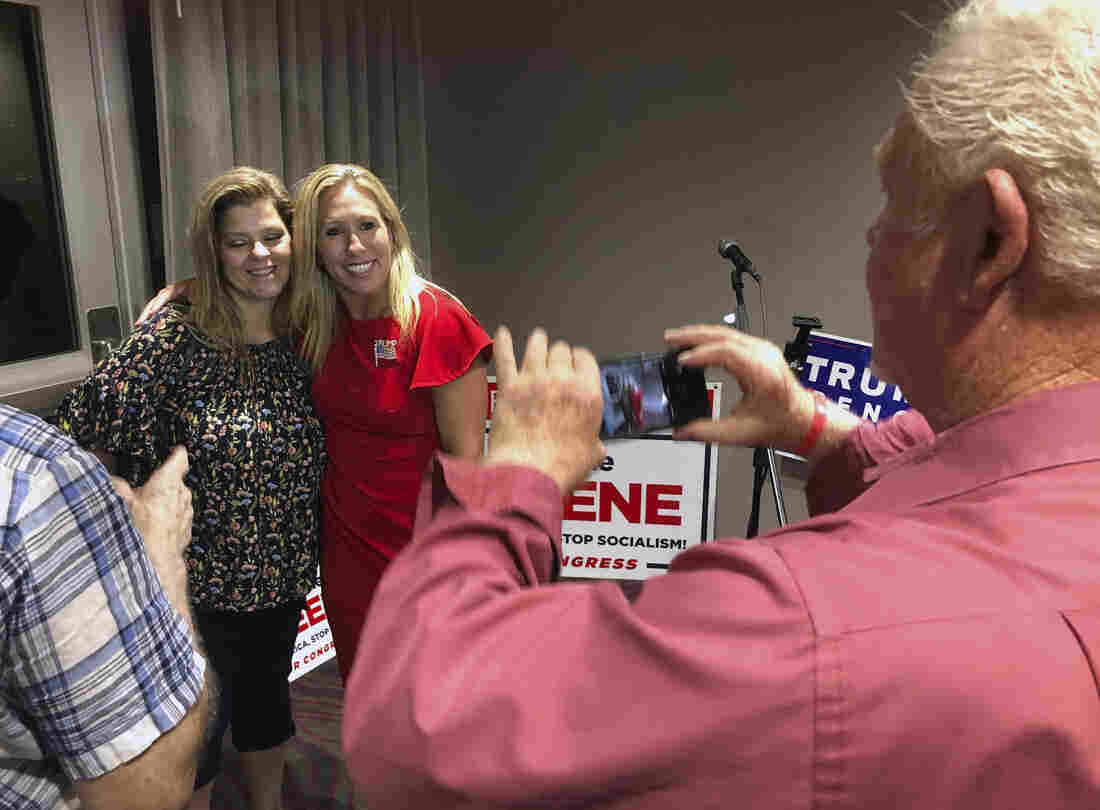 Marjorie Taylor Greene (right) is likely to bring a far-right conspiracy theory to the House of Representatives next year. Mike Stewart/AP hide caption 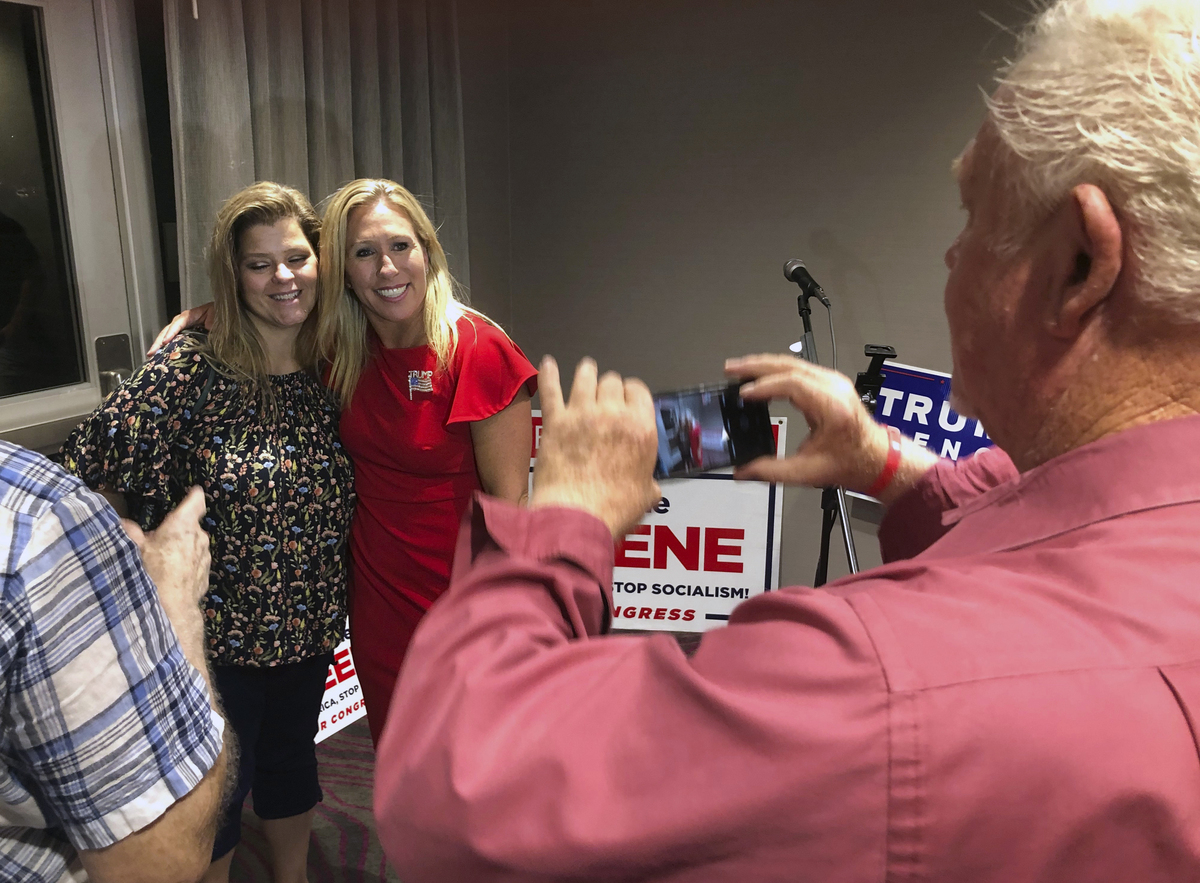 Marjorie Taylor Greene (right) is likely to bring a far-right conspiracy theory to the House of Representatives next year.

Marjorie Taylor Greene's path to Congress has been strewn with controversy. Politico dug up her history of disparaging Black people and Muslims. She's unapologetic about the anti-Semitic tropes she has used to describe George Soros.

But it's another kind of extremism that drew the spotlight to Greene's victory Tuesday in the Republican primary runoff in Georgia: She has promoted the conspiracy theory QAnon, or Q.

The baseless QAnon conspiracy sprang from right-wing message boards in 2017. Those who buy into it think President Trump is leading a secret war against Satan-worshiping pedophiles in the deep state. They believe a figure known only as Q is helping – and leaving encrypted messages for "digital soldiers" of the movement to decode.

The watchdog group Media Matters for America counts 19 congressional candidates with links to QAnon who will be on the ballot in November. Many are long shots. But not Greene, whose primary win in a deep red House district means she's all but assured a seat in Congress. Greene has embraced the QAnon conspiracy in a series of social media posts in recent years.

"Now there's the potential to have someone in political office that believes in QAnon," said Aoife Gallagher, a researcher at the London-based Institute for Strategic Dialogue who co-wrote a new report on QAnon. "To me, that is just a slippery slope."

Greene's far-right stances have made her anathema to many establishment Republicans. Trump, however, tweeted his congratulations, praising Greene as a "future Republican Star."

"The GOP establishment, the media, & the radical left, spent months & millions of dollars attacking me. Tonight the people of Georgia stood up & said that we will not be intimidated or believe those lies," Greene tweeted after her win.

Greene is no longer making videos about Q, but she hasn't disavowed the conspiracy theory, either.

In another tweet Wednesday, Greene dismissed criticism of her statements that Sharia law is "bad" and that Black communities are held back by gangs, as well as her support for a conspiracy theory that Soros, who is Jewish, collaborated with the Nazis. She didn't address QAnon.

Local journalists have tried repeatedly to pin Greene down on Q. They haven't gotten a clear answer; she simply repeats that she's "concerned about a deep state," like "millions" of people around the world. Greene declined an interview request from NPR.

Marc-André Argentino, a researcher in Canada who recently co-wrote a paper on QAnon for the Combating Terrorism Center at West Point, said Q-linked candidates generally fall into two categories: die-hard believers and those who see the movement as a valuable voting bloc.

"I think Marjorie Taylor Greene started in the bucket where she truly believed in QAnon, but now she's probably drifting more toward the political constituency," Argentino said.

Like others in his field, Argentino is concerned about the meteoric rise of QAnon, especially since the pandemic. On Facebook alone, he said, "You're seeing almost a doubling of groups and eight times the amount of members."

Authorities also worry about QAnon becoming intertwined with other, more violent forms of extremism. Last year, an FBI memo called it a potential domestic terrorism threat. Several Q supporters have been linked to serious crimes; one pleaded guilty to a terrorism charge.

Social media platforms are taking steps to curb the spread of Q. Facebook removed a popular QAnon group with 200,000 members, and Twitter has banned or restricted tens of thousands of accounts. TikTok and YouTube also have taken steps to make it harder to find QAnon content.

Critics call it too little, too late. The conspiracy's spread is outpacing efforts to contain it, finding new audiences overseas and in New Age and anti-vaccination factions. Online support groups are springing up for people who are concerned about a relative's obsession with Q.

"I'm looking at these groups, and I'm seeing friends that I went to school with or colleagues, in QAnon groups," Argentino said. "And for me, they don't meet the profile of what I traditionally think of as a conspiracy theorist."

QAnon is so far-fetched and ridiculous that federal authorities and tech companies didn't take it seriously until recently – despite its rapid spread, said Travis View, co-host of the podcast QAnon Anonymous. The show offers a skeptical, in-depth look inside the world of Q.

View said it's good that tech companies and other gatekeepers are paying closer to attention to QAnon now, even if he considers it "two years too late."

"When things go sort of viral online, even if they're dangerous extremist movements, they might be dismissed as fringe," View said. "But once they start entering the halls of Congress, that makes people sit up and pay attention."