Accessibility links
Israel and UAE To Establish Diplomatic Ties In Historic Deal Brokered By Trump President Trump brokers the historic agreement. The United Arab Emirates and Israel will move toward bilateral diplomatic relations, and Israel will suspend plans to annex portions of the West Bank. 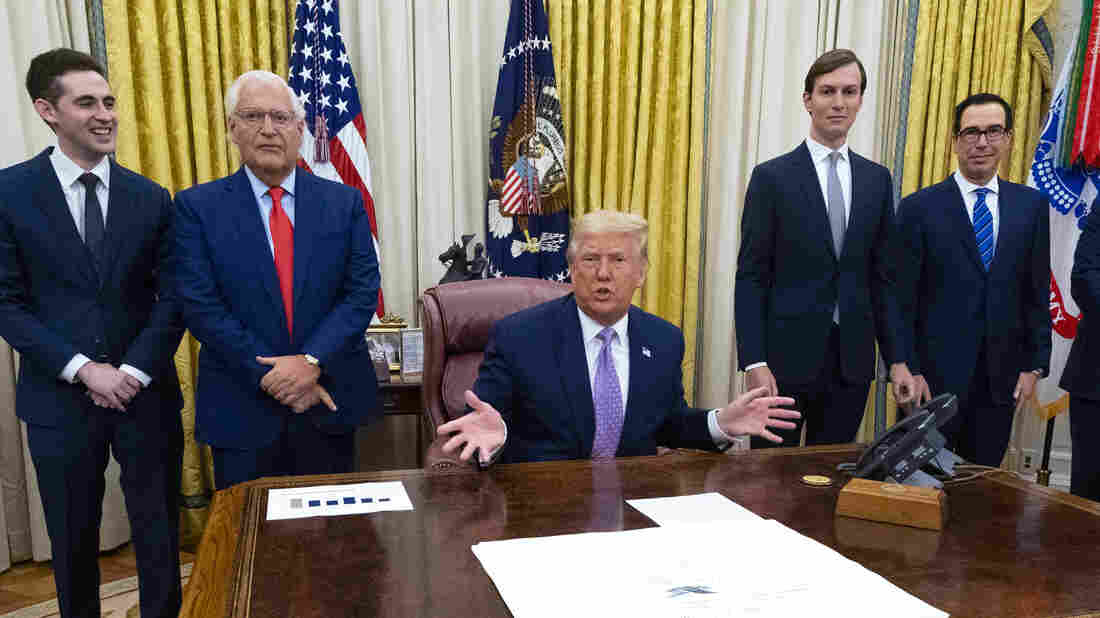 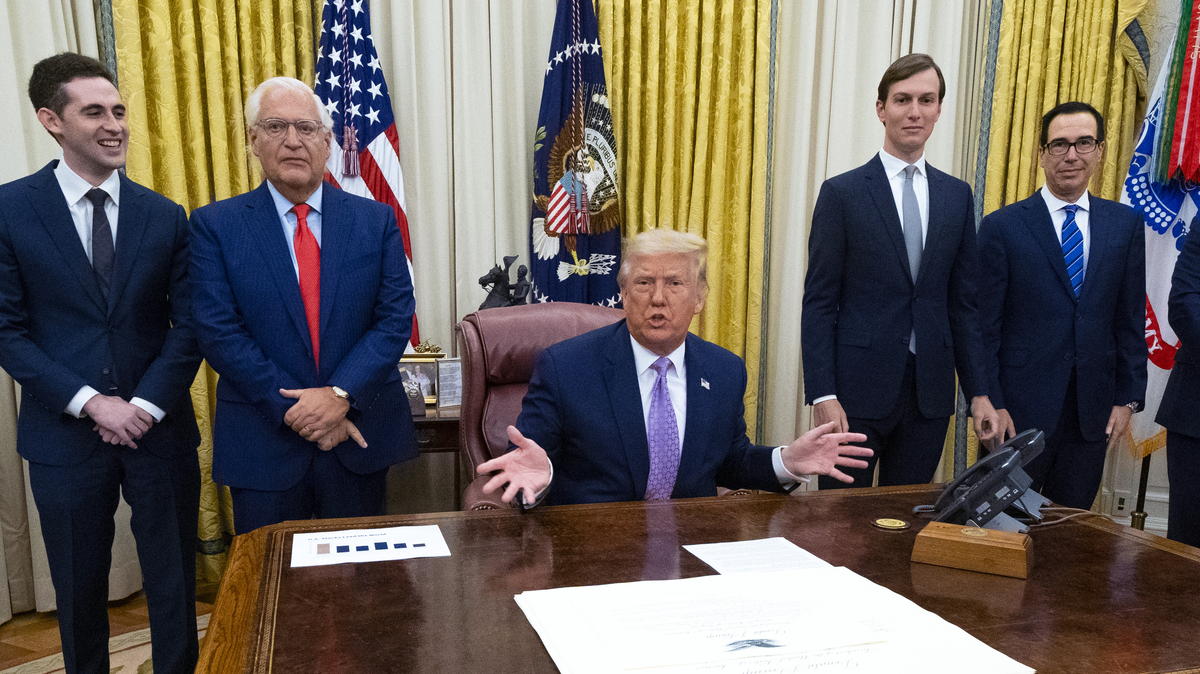 President Trump speaks during a Oval Office meeting Thursday with representatives of Israel and the United Arab Emirates, announcing an agreement to establish diplomatic ties between the two countries.

Israel and the United Arab Emirates have agreed to forge a path toward normal diplomatic relations, and Israel said as part of the agreement it will suspend its controversial plans to annex more territory in the West Bank.

The historic deal was brokered during a call between leaders of the two nations and President Trump.

The UAE's leader, Crown Prince Mohammed Bin Zayed, announced on Twitter that the deal calls for "setting a roadmap towards establishing a bilateral relationship."

Israeli Prime Minister Benjamin Netanyahu called the deal a historic breakthrough toward peace in the Middle East and the launch of a "new era" in Israeli relations with the Arab world.

Egypt and Jordan are the only two Arab nations that currently have normal diplomatic relations with Israel. The UAE has had informal contact with Israel for some time, and relations have been improving.

The White House released a joint statement from the three countries, saying Israel and the UAE "will meet in the coming weeks to sign bilateral agreements regarding investment, tourism, direct flights, security, telecommunications, technology, energy, healthcare, culture, the environment, the establishment of reciprocal embassies and other areas of mutual benefit."

The statement noted the central role Trump played in the talks, saying he asked Israel to suspend its annexation plans as part of the negotiations.

Netanyahu Plans To Annex Parts Of The West Bank. Many Israeli Settlers Want It All

Netanyahu had vowed to annex portions of the occupied West Bank this summer, with support from the Trump administration. But Israelis were divided on the plan, and a spike in coronavirus infections there pulled the focus away from a debate over annexation.

Palestinians and Arab leaders had expressed outrage over the annexation proposal, and there was strong opposition from countries outside the region. Even British Prime Minister Boris Johnson, a self-described "passionate defender of Israel," expressed opposition to the plan.

For decades, the international community has sought to resolve the status of the West Bank through negotiations, not unilateral moves by either side.

Johnson welcomed the news of the deal brokered by the United States.

So have key Israeli lawmakers and even some Israeli settlers, including vocal supporters of annexation. But The Associated Press notes that "harder-line settlers" have spoken out against the deal, with settler leader David Alhayani saying of Netanyahu, "The faith in you has expired."

Meanwhile, Palestinian official Hanan Ashrawi denounced the deal on Twitter, saying Israel was "rewarded for not openly declaring what it's been doing to Palestine illegally and persistently."

Ashrawi wrote: "May you never be sold out by your 'friends,' " an evident reference to the UAE.

The new deal is a significant shift in relations between the UAE and Israel.

Earlier this summer, while still committed to its plans for annexation, Israel announced a groundbreaking partnership with the UAE on the fight against the coronavirus. The UAE promptly distanced itself from the announcement and said it was just private companies, not the two governments, collaborating.