Accessibility links
Colleges That Keep Small Isolated Towns Vibrant Now Pose Public Health Threat Many of those institutions hung on year-to-year even before the pandemic. Now COVID-19 threatens to cut off the oxygen sustaining these schools, and the sports programs that drive enrollment. 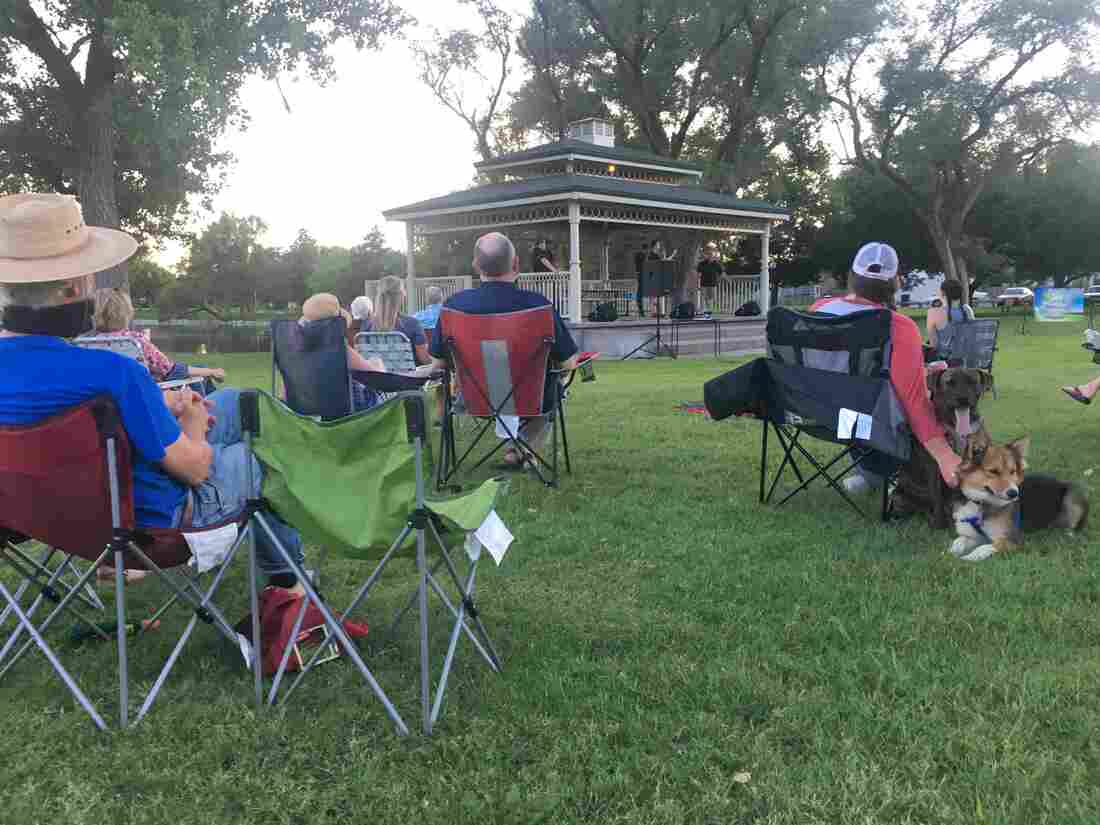 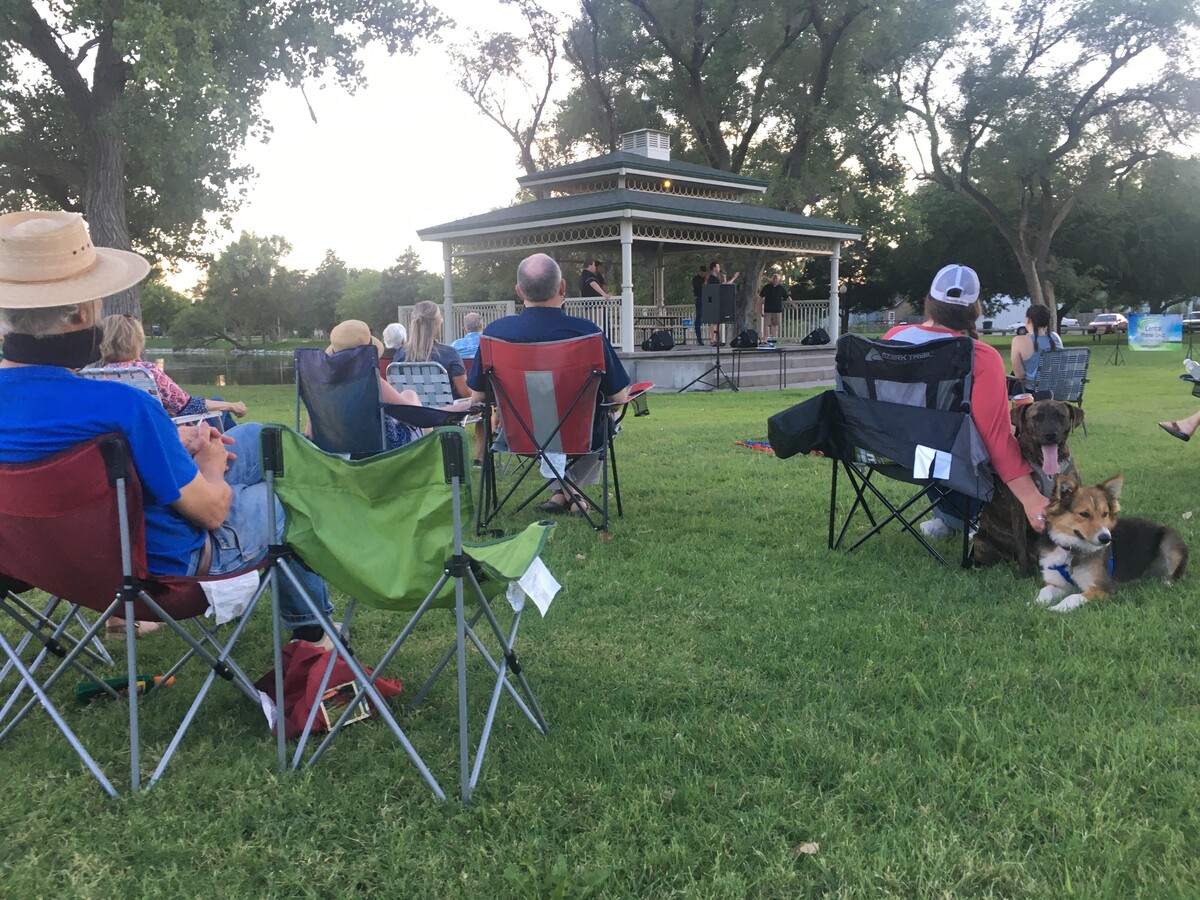 The Sterling College Warriors are scheduled to take on the McPherson College Bulldogs at home. If that familiar thud of shoe against football and cheer from the stands doesn't happen, the college that keeps the central Kansas town's economy humming, that gives it cultural vitality, and that separates Sterling from the hollowing out that defines so many other small Midwestern towns, might not survive.

The school, after 133 years, could die and doom the town that takes such pride in the football squad and embraces the student body like family.

"If COVID defeats the athletic season this year, it will probably defeat a lot of small colleges," said Jeb Miller, a non-traditional senior at Sterling College. "And, as a result, harm a lot of small towns. Badly."

Hundreds of small colleges dotting the country rely on students paying tens of thousands of dollars a year in exchange for a distinctive, personal, high-touch college experience.

Many of those colleges hung on year-to-year even before the pandemic. Now COVID-19 threatens to cut off the oxygen sustaining these schools, and the sports programs that drive enrollment.

Only about 2,200 people live in Sterling out on the flat, flat plains of south-central Kansas. But this small city boasts an almost idyllic downtown. New office buildings. Two good coffee shops. A nice grocery store, a bowling alley, you name it.

"There is just so much overlap," said Kyler Comley, a Sterling College senior who's lived in the town all his life. "The community supports the college. The college supports the community. You know, you just see how everything's intertwined and how people are just so overly giving and involved."

Every student attending Sterling College gets paired with a family in town. Those families speak endearingly about their adopted scholars.

The students left in March. Most haven't come back. Like many people here, Sterling criminal justice professor Mark Tremaine said that starting classes up again in person this month is make or break for Sterling College.

"The bottom line is, we've got to get students back to campus. If we're going to survive," he said."We have to accept whatever the risks are and do it."

And that's the plan. Sterling doesn't have much of a choice. 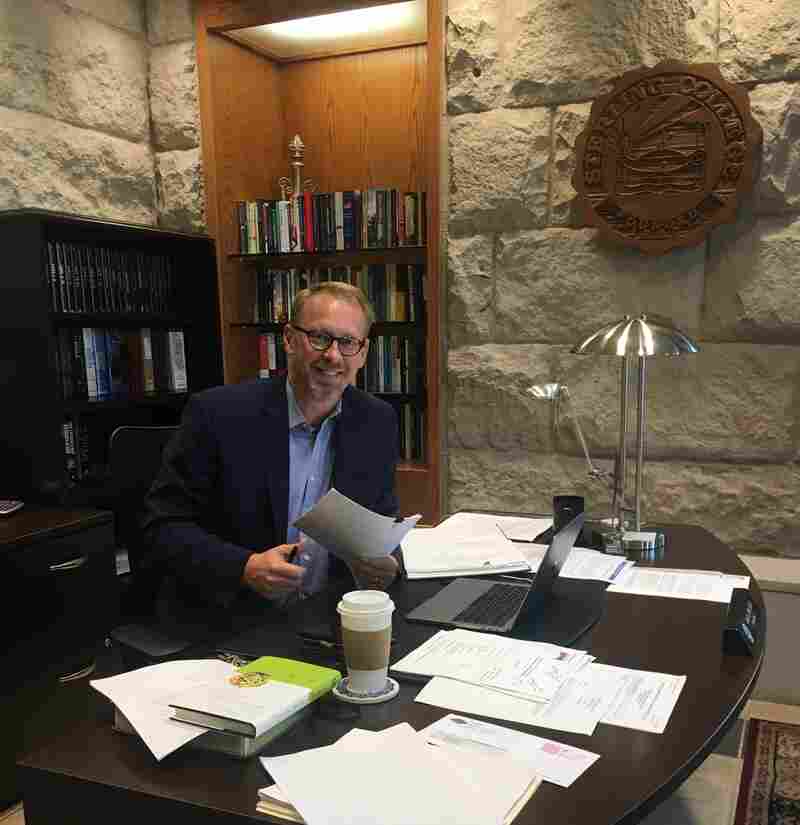 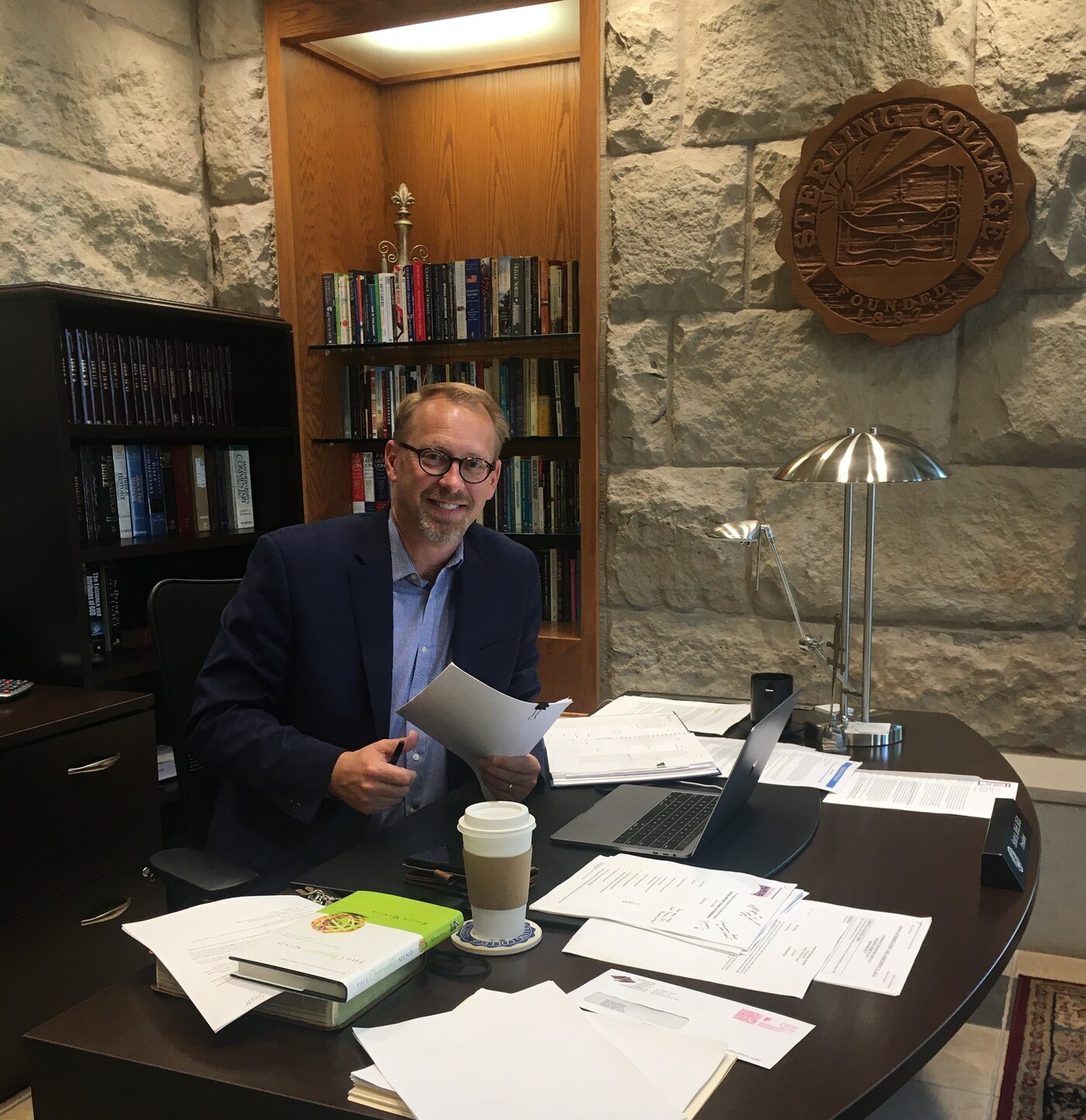 "We have committed to open up in the fall," Sterling College President Scott Rich said. "With face to face classes, face-to-face coursework, dorms and activities and full swing. But we're committed to doing it safely."

Rich said the school will quarantine students coming back to the dorms, test them liberally, and isolate those who come down sick in local hotels.

Rich said the freshman class looks strong, with about 200 new students. But he is desperately trying to woo 50 or so upperclassmen who haven't signed on this year. The school needs them because, like many other small institutions, Sterling College scrapes by from year to year.

Other small-town schools across the country, and the communities tied to their fate, face the same existential crisis.

"Some of the people I know are looking at hundreds of colleges going out of business within the next several years, if this pandemic continues and if the economic devastation associated with it continues," said Scott Carlson with the Chronicle of Higher Education.

Small liberal arts colleges have been shaky for years. Enrollments have slumped, endowments have been drained. Many schools have piled on debt in a building boom fueled by competition for students.

Most offer courses online, but online classes don't pay the bills. Small schools survive only by providing an expensive, in-person college experience. And Carlson said the pandemic shreds that business model, and threatens to trigger the higher education equivalent of a mass extinction.

"It's kind of sad," he said. "These colleges are unique, little entities all on their own, and each one of them provides a unique spin on higher education."

The Coronavirus Pandemic May Be Loosening Links In The Supply Chain 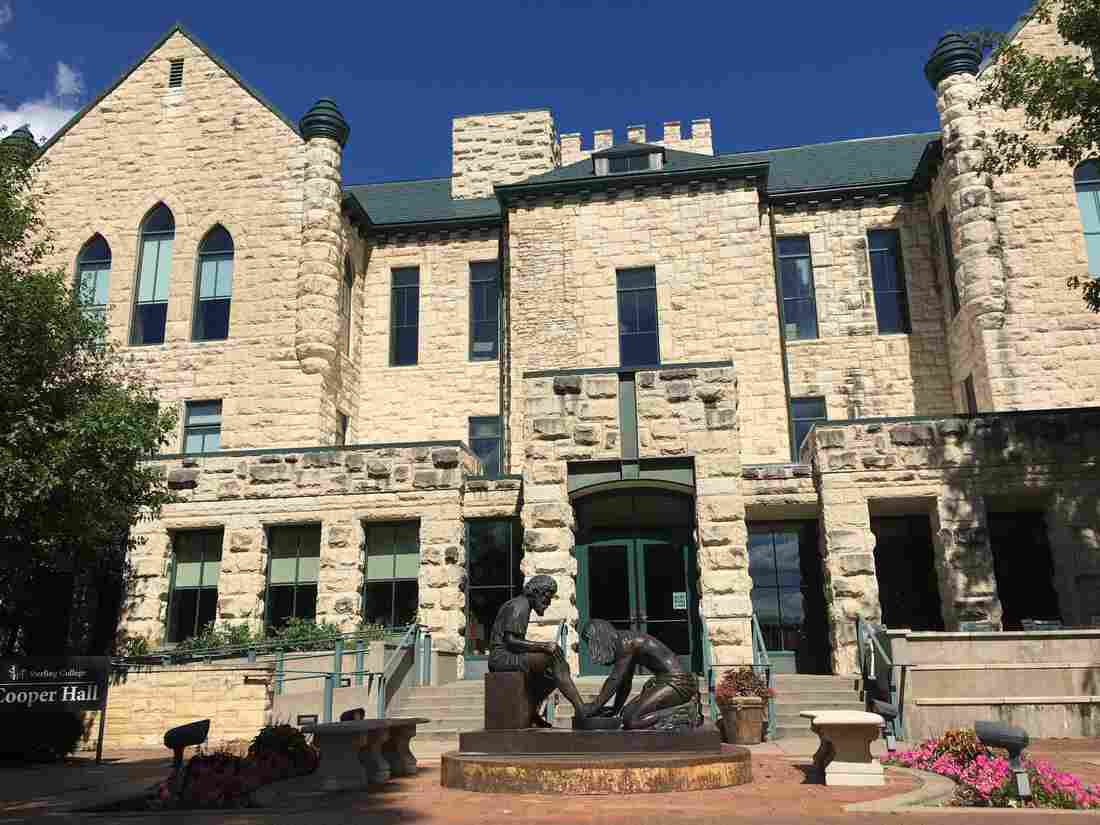 A statute of Jesus washing the feet of a disciple greets students entering Sterling College. The school tries to instill an ethic of "servant leadership" in students, but relies on the sports to draw students. Now after 133 years the school may be forced to close, if the pandemic keeps students from enrolling this fall. Frank Morris/KCUR hide caption 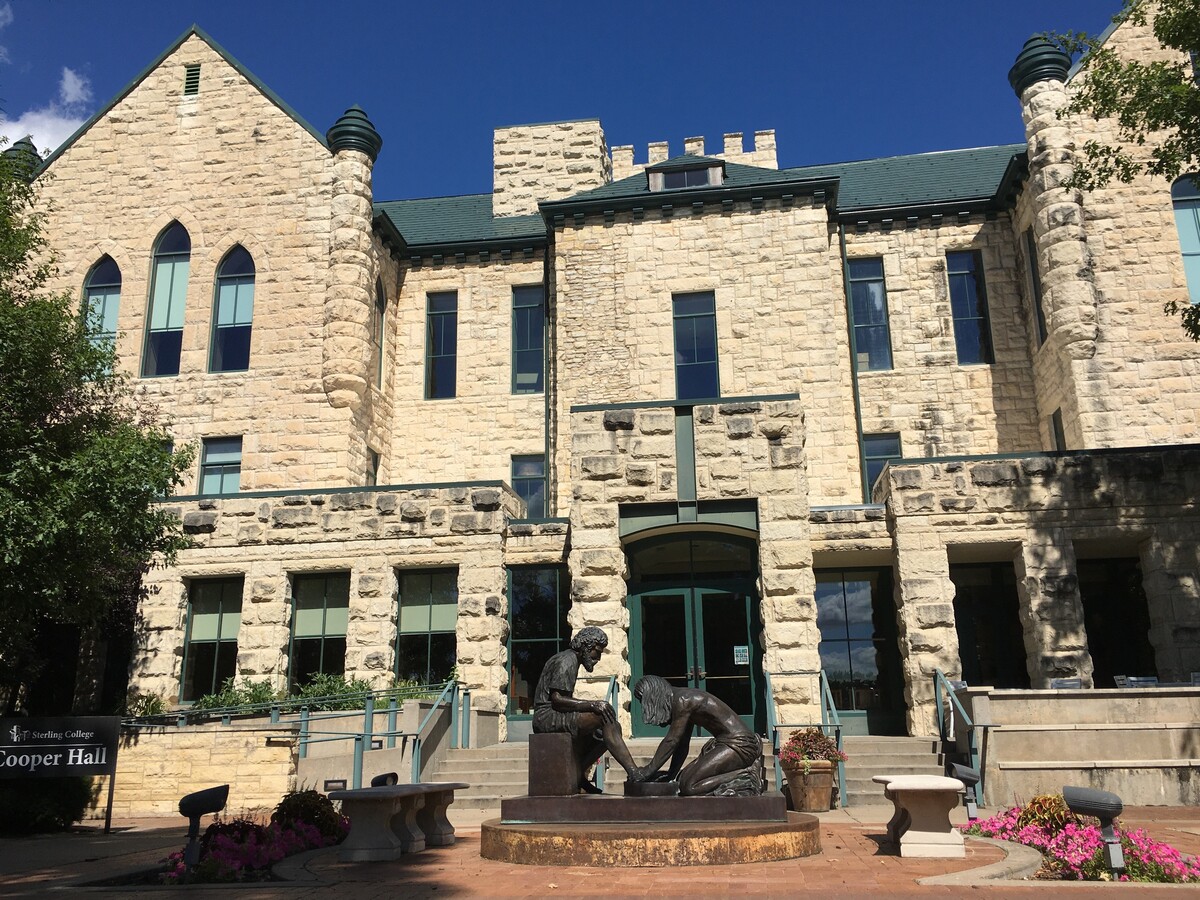 A statute of Jesus washing the feet of a disciple greets students entering Sterling College. The school tries to instill an ethic of "servant leadership" in students, but relies on the sports to draw students. Now after 133 years the school may be forced to close, if the pandemic keeps students from enrolling this fall.

Sterling College, for instance, leans heavily on a particular interpretation of Christianity. Guarding the front door of the classic, old limestone building that anchors campus is a statue of Christ — not being tortured on the cross, but humbly washing the feet of a disciple. "Servant leadership," as anyone here will tell you, guides the campus ethic.

But football keeps the lights on here.

"We do have a good football team," said Sterling's athletic director, Scott Downing. "They've been fairly successful the last dozen years and been to the national playoffs, won the conference championship."

The team helps bring the students together, but more importantly, it drives enrollment.

"With a football team number of about 125 to 135 student-athletes, quite a bit of our student body is involved in that sport," Downing said.

That's an understatement. There are only about 500 students on campus in a given year, one in four is on the football team. And there are 20 other sports.

The chance to play college sports is a major selling point for schools like Sterling. It drives enrollment. But in a pandemic, sports can be vectors for disease. And Jed Miller, who's finishing his degree at Sterling online next year, said that's another vulnerability.

So, the same colleges that keep some small towns vibrant now pose a particular threat to public health.

"The college probably is the most dangerous element for us in terms of COVID," said Kristina Darnauer, a family practice doctor in Sterling. "It potentially brings back students from all over the U.S. who have variable levels of exposure."

Darnauer is torn. She loves Sterling, loves the college, and fully appreciates how important it is to the school and the town that college ramp almost as normal this fall.

But she's got patients to care for. And she said this county, with only one hospital and no intensive care unit is not ready for a cluster of coronavirus cases.

"If we have a huge outbreak," Darnauer said, "we're going to be out of resources very quickly."

Colleges Spent Months Planning For Fall, But A COVID-19 Surge Is Changing Everything

Small colleges and college towns across much of the country face the same worries.

But some analysts say that a pruning of universities may prove inevitable, and that the coronavirus has only sped up the thinning of the higher education herd.

"I actually see the future of higher education, broadly speaking, as entering a new golden age," said Richard Price, a research fellow at the Clayton Christensen Institute. It's a think tank that presses for dramatic change in institutions.

Price said the pandemic may hasten the evolution to better online classes, and a public education system that's much more accessible and equitable.

"The traditional model, it was originally for the landed elite and it wasn't for all genders," Price said. "It wasn't for all races. And that is slowly getting phased out along with some older business models that aren't pivoting well."

Price thinks many little colleges will adapt. Lots of them have cheated death before. But he said there's little doubt that this time next year the United States will have fewer colleges.

Folks in Sterling, Kansas hope and, yes, pray, that Sterling College is among the survivors.