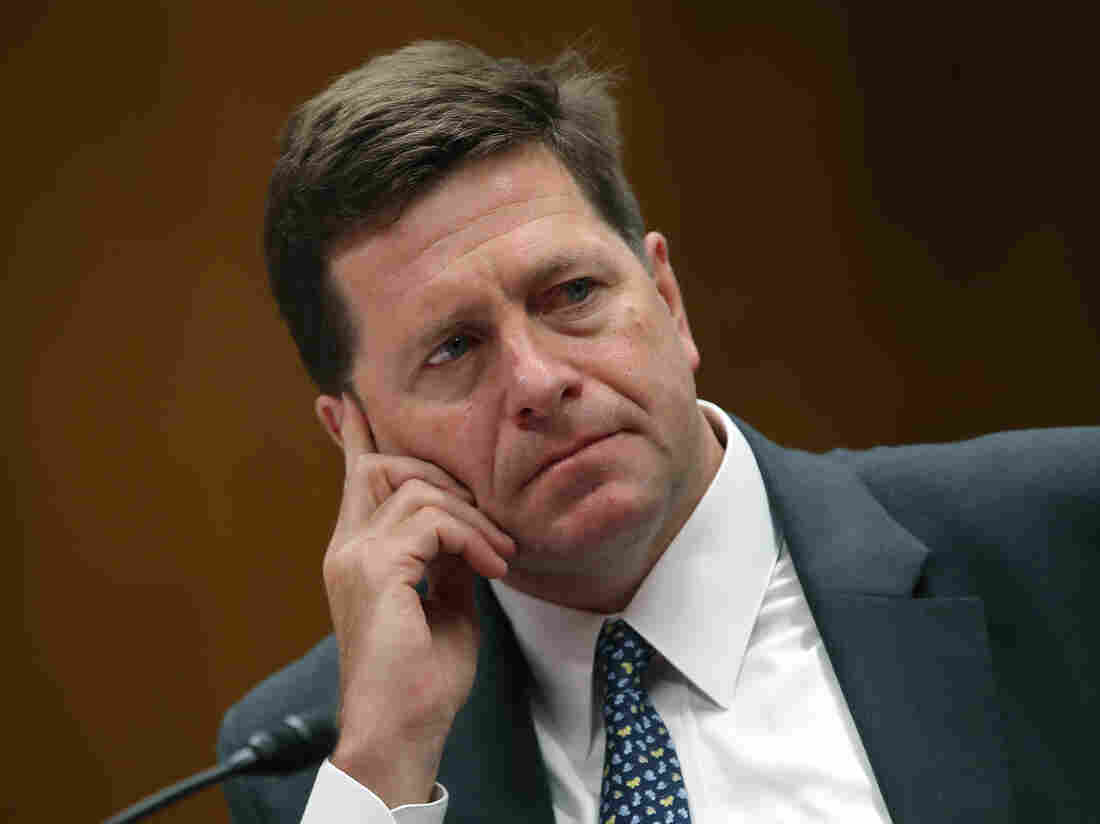 Jay Clayton, chairman of the Securities and Exchange Commission, testifies during a hearing on Capitol Hill in May 2019. At his 2017 confirmation hearing, Clayton pledged "zero room for bad actors in our capital markets," but enforcement of insider trading is at the lowest in decades. Mark Wilson/Getty Images hide caption 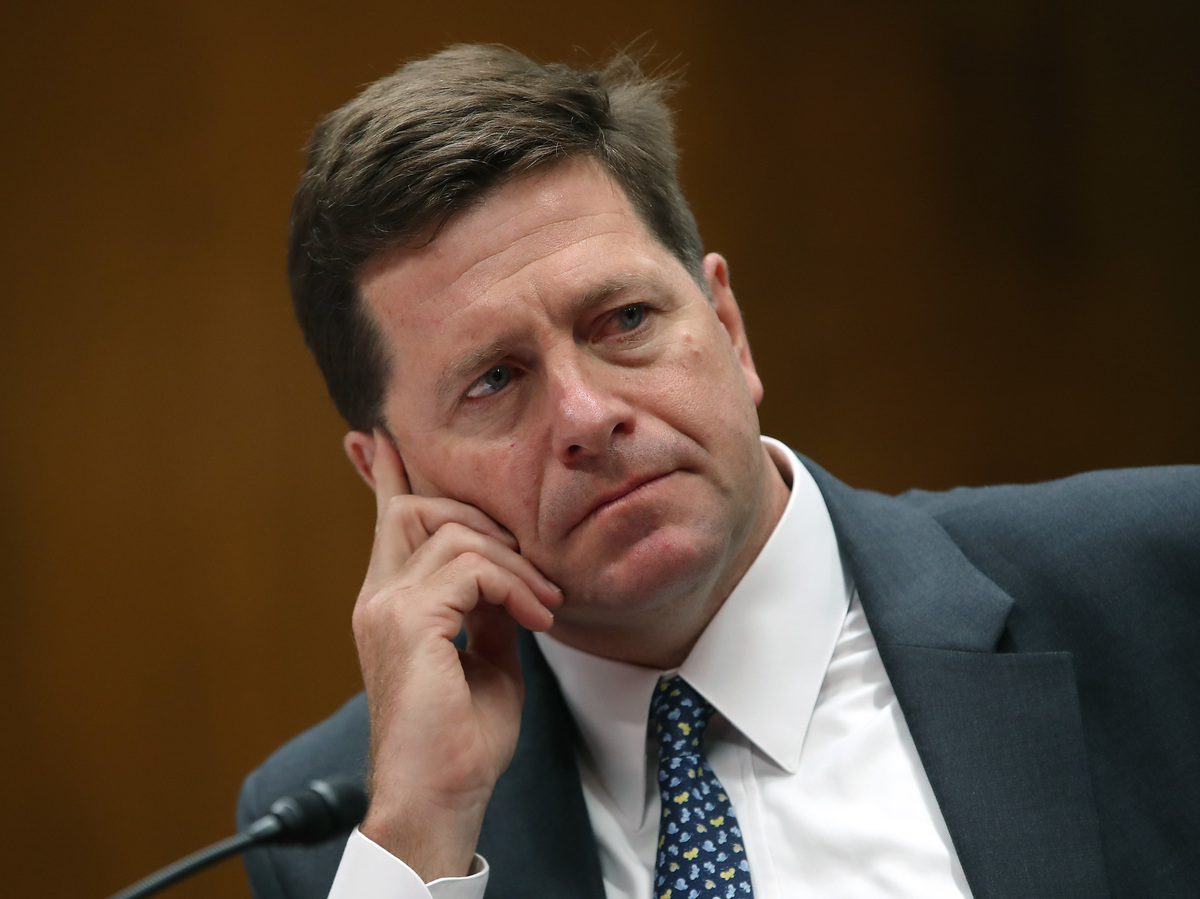 Jay Clayton, chairman of the Securities and Exchange Commission, testifies during a hearing on Capitol Hill in May 2019. At his 2017 confirmation hearing, Clayton pledged "zero room for bad actors in our capital markets," but enforcement of insider trading is at the lowest in decades.

The government agency responsible for policing Wall Street brought the fewest number of insider trading cases in decades, according to the most recent available data.

That decline came just before the COVID-19 pandemic hit. The Securities and Exchange Commission now warns that the pandemic has created wild swings in the market and more opportunities for insider trading.

NPR reviewed data from the 1980s through last year and found that under the Trump administration, the SEC brought just 32 insider trading enforcement actions in 2019, the lowest number since 1996.

The SEC charged 46 defendants as part of those cases. That was the lowest number of defendants in insider trading cases since Ronald Reagan was president, and about half of the annual average over the last three decades. The decline has alarmed experts and advocates, who worry that flagrant illegal trading may go unchecked.

In a statement, a spokesperson for the SEC called insider trading enforcement a "core component" of the commission's work, saying, "We continue to vigorously pursue insider trading cases against individuals and companies."

Despite a 35-day government shutdown, the overall number of SEC enforcement actions increased in 2019, largely due to a crackdown on other wrongdoing, including alleged abuses by investment advisers. But as other enforcement areas grew, insider trading made up less than 4% of the commission's enforcement work that year, another decades-long low.

The SEC has still brought high-profile insider trading cases in the Trump era. In 2018, for example, the commission charged then-U.S. Rep. Chris Collins, R-N.Y. Collins served on the board of an Australian biotech company and tipped off his son, so they could unload stock before a bad announcement led to a sell-off. Overall, 2017 and 2018 were much closer to historic averages of insider trading enforcement. But the SEC spokesperson did not address why enforcement appeared to drop so dramatically in 2019.

U.S. Sen. Richard Burr, R-N.C., is under FBI investigation and has faced bipartisan condemnation for making major stock trades at the same time he was getting private government briefings on COVID-19. Eastman Kodak is also under SEC investigation and has announced its own "internal review" after an unusual amount of trading activity the day before it announced it would be receiving $765 million in government loans. That loan is now on hold, as the government agency making the loan said "allegations of wrongdoing raise serious concerns." Burr and Kodak have denied any wrongdoing.

Despite those recent cases, the overall numbers are clearly down. "You can't do every case," said Doug Davison, a former SEC enforcement supervisor. But a lack of resources doesn't explain the drop: Adjusted for inflation, the SEC's budget has roughly quadrupled in the last three decades.

And while insider trading can be difficult to detect, there's no evidence that 2019 was simply a more honest year on Wall Street.

Instead, experts and former SEC attorneys said, the drop in insider trading enforcement likely reflects the choices of its leadership. Under Chairman Jay Clayton, the SEC has largely focused on protecting individual investors from shady advisers, Ponzi schemers or con artists. Clayton likes to say he advocates on behalf of Main Street investors and "Mr. and Mrs. 401(k)."

"They've been focused on more black-and-white wrongdoing," Davison said. The SEC has also added more resources to look into cyber-related misconduct, such as hackers stealing and trading based off of company secrets, or issues with cryptocurrency.

Those areas are important, as underscored by a major hack of the SEC's own systems in 2016. But the shift in priorities has some experts and advocates worried.

Research by Cline and his colleague, Valeriya Posylnaya of the University of Minnesota Duluth, indicates that when the SEC aggressively polices insider trading, it does deter illegal activity. If executives see a major figure such as Martha Stewart get hauled to court, as she did when she faced a criminal indictment and SEC charges for insider trading in 2003, they tend to think twice before acting on inside information.

And the reverse is true, Cline said: If enforcement drops, "we should then observe more insider trading in years to come."

The shift in priorities and the significant drop in insider trading investigations in 2019 send a terrible message to Wall Street, advocates said.

"That means they're not trying," said Bartlett Naylor, a financial policy advocate with the left-leaning watchdog group Public Citizen. "That means they told the cops to go play canasta instead of doing their job."

Critics inside and outside government see plenty of work to do. The SEC's investigation into Kodak has already attracted scrutiny from House Democrats, who have launched their own investigation. Previously, Sen. Elizabeth Warren, D-Mass., also called for an SEC investigation into trades of defense stocks before the U.S. assassination of Iranian Gen. Qassem Soleimani, and whether President Trump may have alerted members of his Mar-a-Lago club in advance of the strike.

"The pharmaceutical industry generally is very susceptible to insider trading," said Eric Chaffee, a law professor at the University of Toledo and editor of the Securities Law Prof Blog.

"Getting approval from the [Food and Drug Administration] can be very determinative to whether a company's fortunes rise or fall," Chaffee said, and announcements related to COVID-19 vaccine development can dramatically affect the market.

In March, the co-directors of the SEC's enforcement division issued a statement warning that "in these dynamic circumstances, corporate insiders are regularly learning new material nonpublic information that may hold an even greater value than under normal circumstances."

Members of Congress have been closely scrutinizing Clayton's record. Trump recently tapped Clayton to take over as the top federal prosecutor in New York. In the process, the administration pushed out the U.S. attorney for the Southern District of New York, Geoffrey S. Berman, who had investigated allies of the president.

When company executives and politicians appear to engage in flagrant insider trading, Velikonja said, "that's where you start entering the very dangerous terrain, and people look at this and say, 'This is all rigged.' "

If left to run rampant, she said, "it does have the potential to unsettle political systems."