Accessibility links
Trump Campaign Tries To Win Over Skeptical Black Voters The president's campaign had begun holding "Black Voices for Trump" events, but the coronavirus pandemic shut down in-person campaigning for months. During that time, the election landscape shifted. 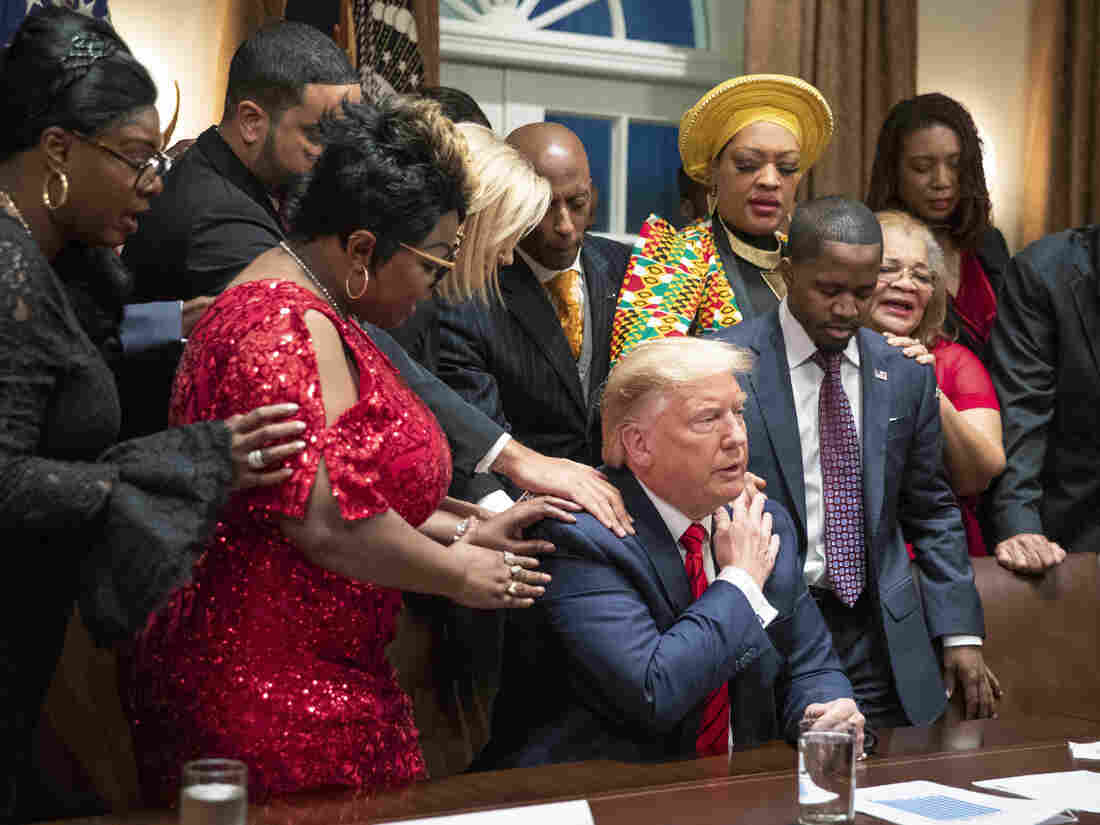 Black leaders say a prayer with President Trump as they end a meeting in the Cabinet Room of the White House in February. Manuel Balce Ceneta/AP hide caption 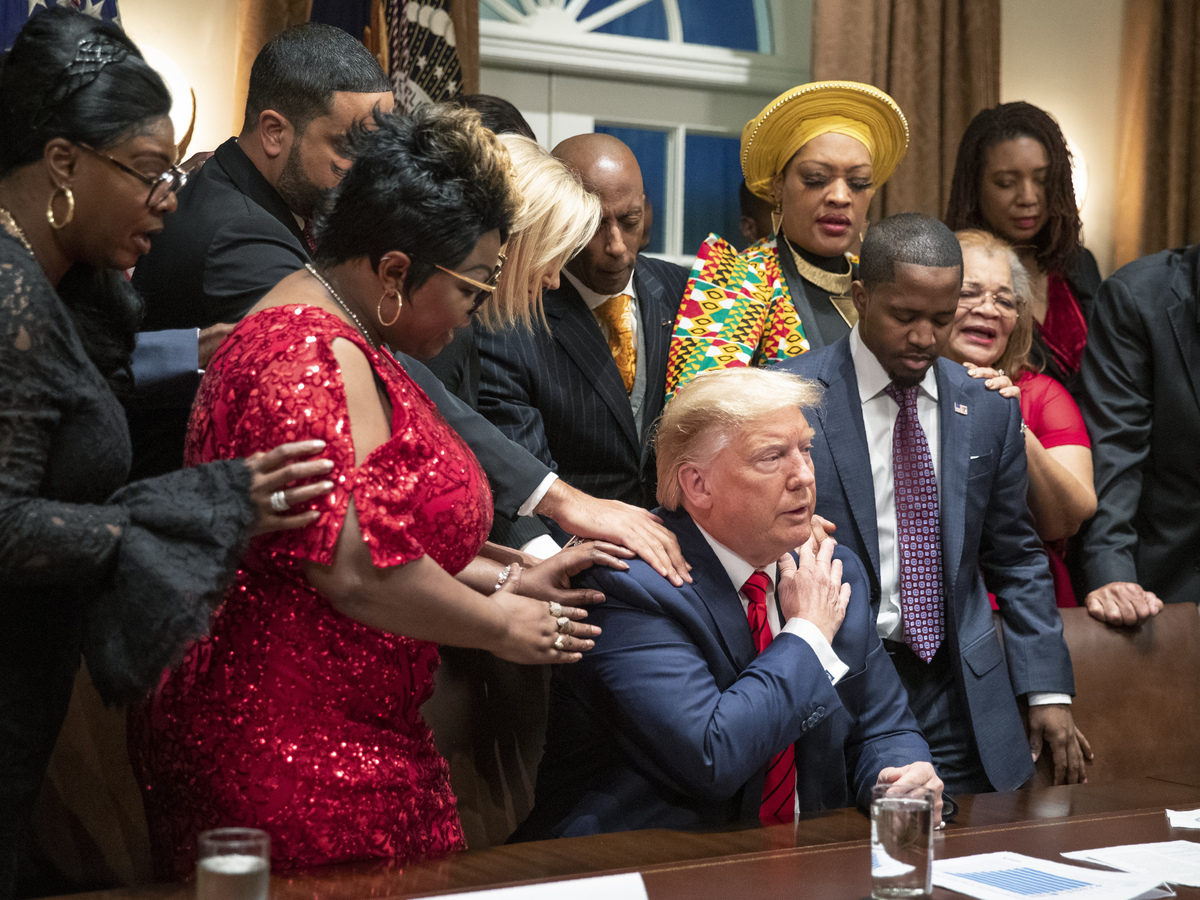 Black leaders say a prayer with President Trump as they end a meeting in the Cabinet Room of the White House in February.

President Trump has been arguing that he has been the best president for Black Americans outside of Abraham Lincoln, but with less than 100 days before the election, it's not clear that his campaign to reach African Americans is changing many minds.

Trump won just 8% of the Black vote in 2016. Current polls show the vast majority of Black voters backing Trump's Democratic rival, former Vice President Joe Biden. But, in swing states like Wisconsin and North Carolina, where the presidential race could be tight, squeezing out a few more Black votes could make a difference for Trump.

Trump started out the year with a State of the Union address that highlighted issues aimed at appealing to African Americans: rising Black employment opportunities, funding for historically Black colleges and universities, and tax breaks for investments in poor communities.

His campaign also announced plans to open more than a dozen field offices in critical cities with large African American communities, like Milwaukee and Detroit.

But shortly after they began holding "Black Voices for Trump" events, the coronavirus pandemic shut down in-person campaigning for months. And during that time, the election landscape shifted.

The economic shock caused by the response to the pandemic wiped out one of the campaign's key talking points — low Black unemployment. And polls showed that most Americans of all races blamed Trump for increasing racial tensions after massive protests broke out about the killing of a Black man, George Floyd, in police custody.

Now, where local regulations allow, the campaign is back in the field attempting to make the case for reelecting Trump.

"We're in the communities, because we knew we could not depend on the mainstream press to tell Americans exactly what this president is doing and has done for them," said senior campaign adviser Katrina Pierson. "So we're on the ground making sure that they stay informed."

In a state like Wisconsin, which Trump won by less than 1%, Democrats and Republicans are fighting for every vote.

The Milwaukee field office is the first ever for Republicans in the city. Back in late February — before the pandemic hit — the campaign held a panel discussion in the storefront office with speakers brought in from across the country to talk to about 50 people in attendance about the importance of Black Republicans.

According to Pierson, that office now has about eight people on staff. In recent weeks, the Milwaukee office has hosted a cookout and a movie night, screening a documentary about Black conservatives.

These events "allowed for us to connect with people in a smaller setting," said Paris Dennard, a senior adviser on Black media for the Republican National Committee.

But gaining support for any Republican in these Democratic strongholds is not going to be easy, and polls have shown that a majority of Black voters believe Trump is racist.

Orlando Owens is a Black Republican running for the Wisconsin state legislature representing part of Milwaukee. The seat has been held by Democrats for decades.

Owens has been knocking on doors making the case for his own campaign, but he said that residents do bring up Trump and not necessarily in a good way.

"I see some that like President Trump. I see a lot more that question his moves," Owens said.

He said he never bashes Trump. Instead he focuses on what he could do for his district by working with the Republican majority in the state capital.

Some people have asked Owens whether they would have to vote for Trump if they vote for him.

He said he tells them: "You do whatever you think you need to do on the presidential level. But you don't have to vote for a straight party. You can vote for each individual race ... and people smile."

Back in February, Quinn Taylor was one of the Milwaukee residents who attended the Trump campaign panel discussion.

Taylor, who is African American, says he's still open to voting for Trump. But he wants him to be more thoughtful and presidential.

"I don't think he made one correct decision regarding the coronavirus," Taylor said. "I think we really could've came out of this a whole lot better if he took it seriously."

Taylor said he liked that Trump was talking more about social distancing and wearing masks, but he's not sure how long that will last.

Even though Taylor attended a campaign event, he said he hasn't heard much from the campaign other than generic emails. He said he would like to see them do more to help the community.

RNC adviser Dennard acknowledged that the campaign has more work to do to make sure its connections have lasting impact.

"That's something we are going to work on, making sure that people who have a genuine interest and want to hear more about the Republican Party give the president a first look," Dennard said. "We want to make sure that we meet them."