Accessibility links
Coronavirus Leaves Colleges Scrambling To Provide Laptops To Students One in 10 U.S. college students doesn't have access to a laptop. The pandemic is pushing colleges to change that. 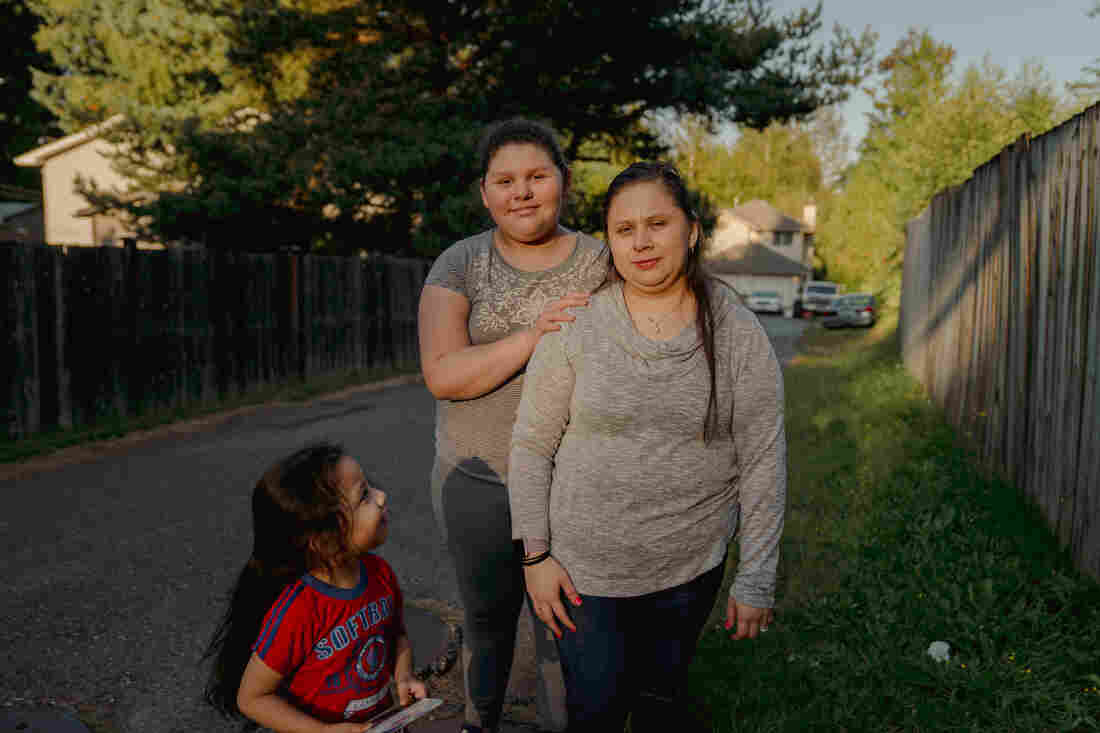 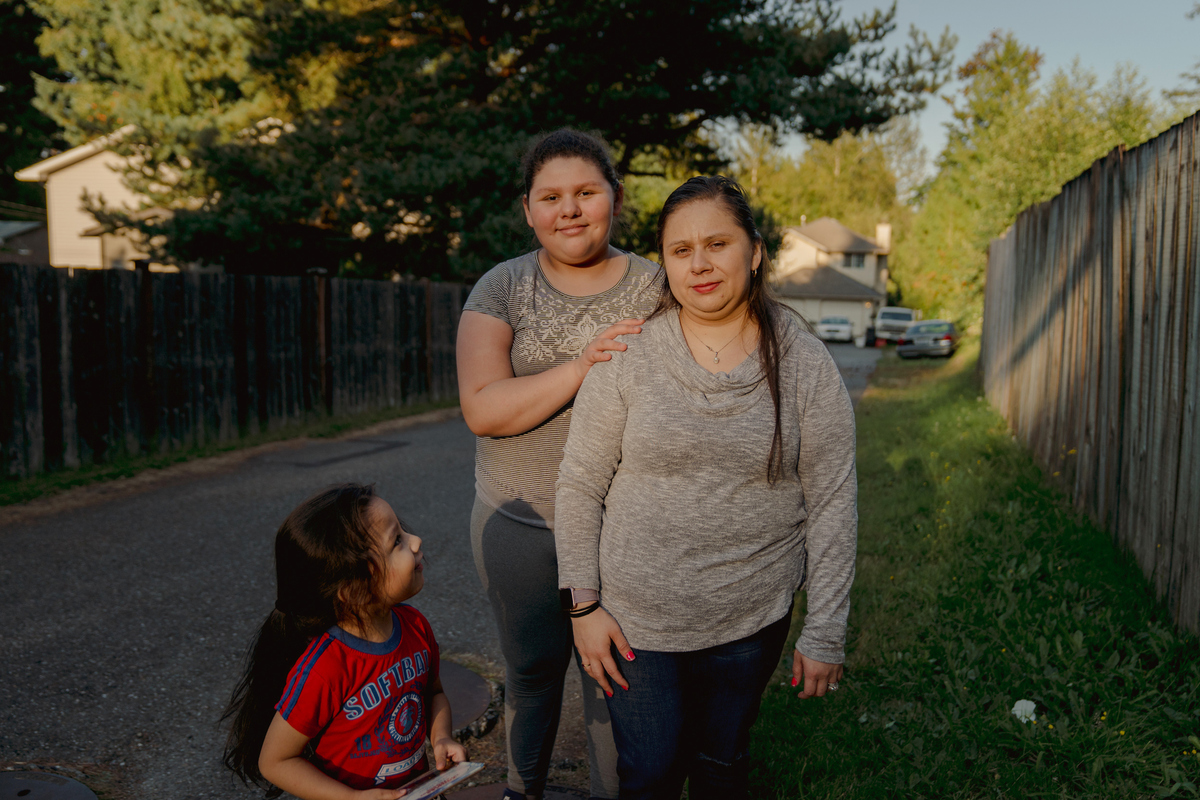 When the pandemic hit the state of Washington, it took Patricia Lopez's job as a medical assistant with it. Not having a college degree made it especially hard to find a new job, as so many employers were making cuts and tightening budgets.

Lopez applied for unemployment benefits — she'd need money to support her two kids and her mother, who lives with her — and signed up for classes at the local community college.

"Everything happens for a reason," she told me. She saw the misfortune as an opportunity, and felt there was no better time to finally get her associate's degree. She could spend her time without a job trying to set up a better financial future for her and her children.

Since she didn't have a computer or Internet at home, she signed up for classes on her iPhone.

We've long known there's a digital divide in America. The pandemic, which has forced the country to jump headfirst into an immersive, all-encompassing digital existence — is only exacerbating it. Most of the discussions focus on elementary school children, but college students get stuck in this disconnected abyss too. Research shows 10 percent of the nation's college students — that's about 2 million people — don't have access to a laptop for school. 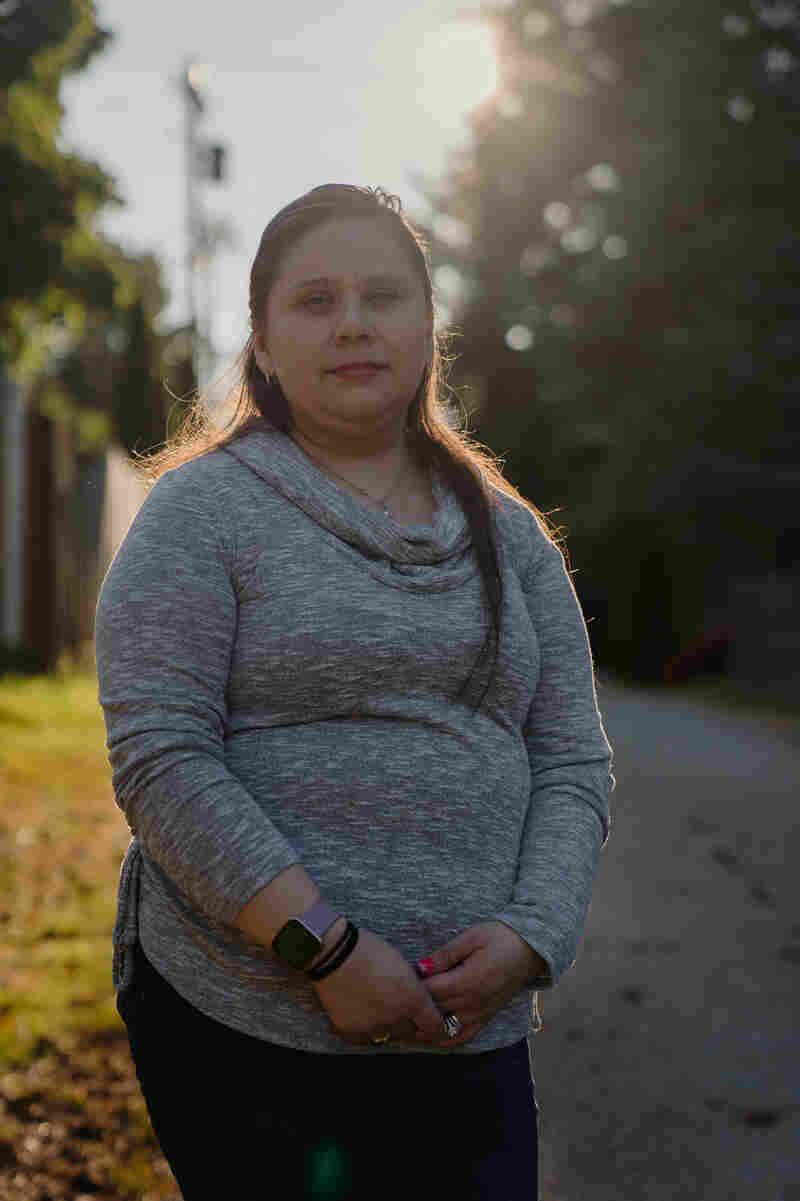 When Lopez signed up for classes back in March, her plan was to rely on Everett Community College's library to use a computer and access the internet. Then the pandemic happened. Jovelle Tamayo for NPR hide caption

And, that number may be much higher now as so many families are sharing devices to work remotely or to keep younger children in virtual school. The lack of connectivity is disproportionate when it comes to non-white communities: 37% of Latino families either have no broadband Internet at home, or are connected only through a smartphone.

When Patricia Lopez signed up for classes back in March, her plan was to rely on Everett Community College's library to use a computer and access the Internet. She imagined she'd spend time there after class, studying and writing up assignments. Then the campus closed due to the pandemic and her classes shifted to strictly virtual. Her library plans "went out the window."

Her daughter's school offered free and discounted home Internet and a friend gifted her an old iPad. The device was great for watching videos, she says, but it wasn't so great for her academics.

"Anything that had to do with typing I would dread," explains Lopez. "Having to punch in every word with my finger, it does not work."

As more and more colleges announce partial or completely virtual fall semesters, having a computer and reliable Internet is crucial.

Colleges Spent Months Planning For Fall, But A COVID-19 Surge Is Changing Everything

To Stay In Touch With Students, Teachers Bypass Computers, Pick Up Phones

"A lot of people still felt laptops were a luxury as opposed to a must-have," says Tim Rager, who leads the Information Technology department at Everett Community College. "Now we're realizing it's really a must have."

The northwest Washington community college, like many schools, had long had a laptop loaner program, where students could check out a computer for a few hours, like a library book. They had about 50 devices on hand.

But when classes went virtual, they switched from short-term rentals to longer-term rentals. And they were inundated with requests.

"So all of a sudden, 'OK, wait! We've got to expand this,' " remembers Rager. Fifty laptops was not enough. So he and his team purchased 400 more. Rager thought that was enough. He was wrong. "That initial four hundred were just gone. They were just gobbled up." So they ordered another 700. 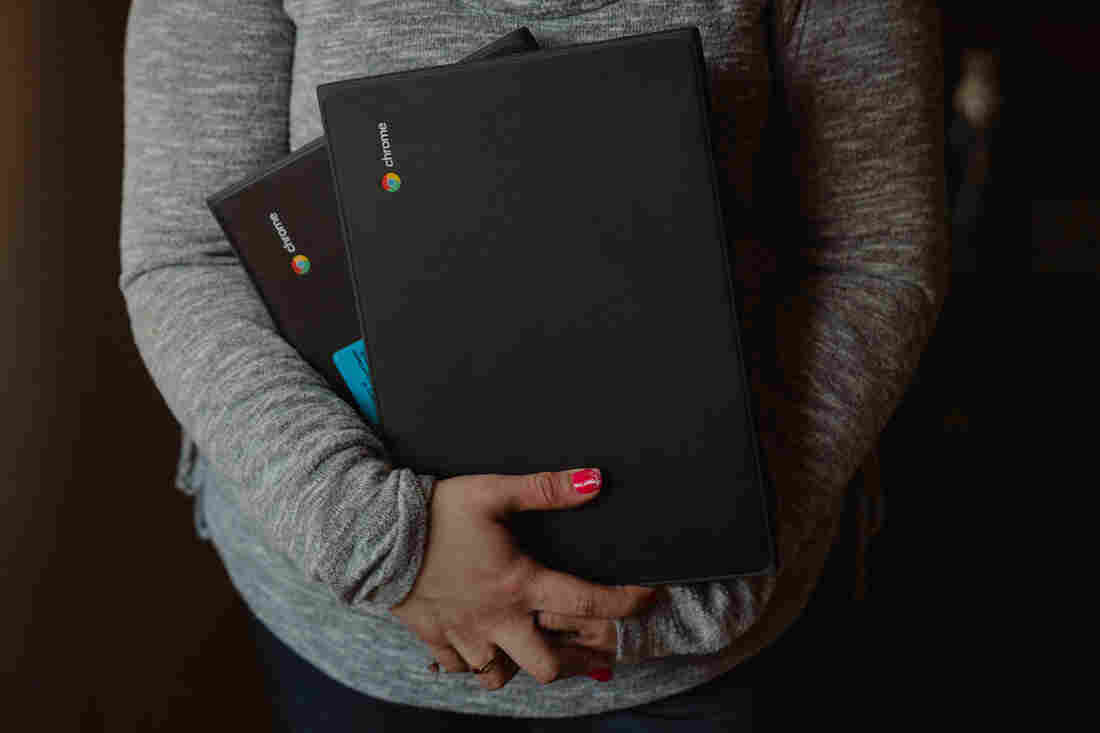 Patricia Lopez, a mother of two, enrolled in community college after losing her job at the start of the pandemic. Because she did not have a computer, the school gave her one. Her daughter, Yamely, also received a Chromebook from school. Jovelle Tamayo for NPR hide caption 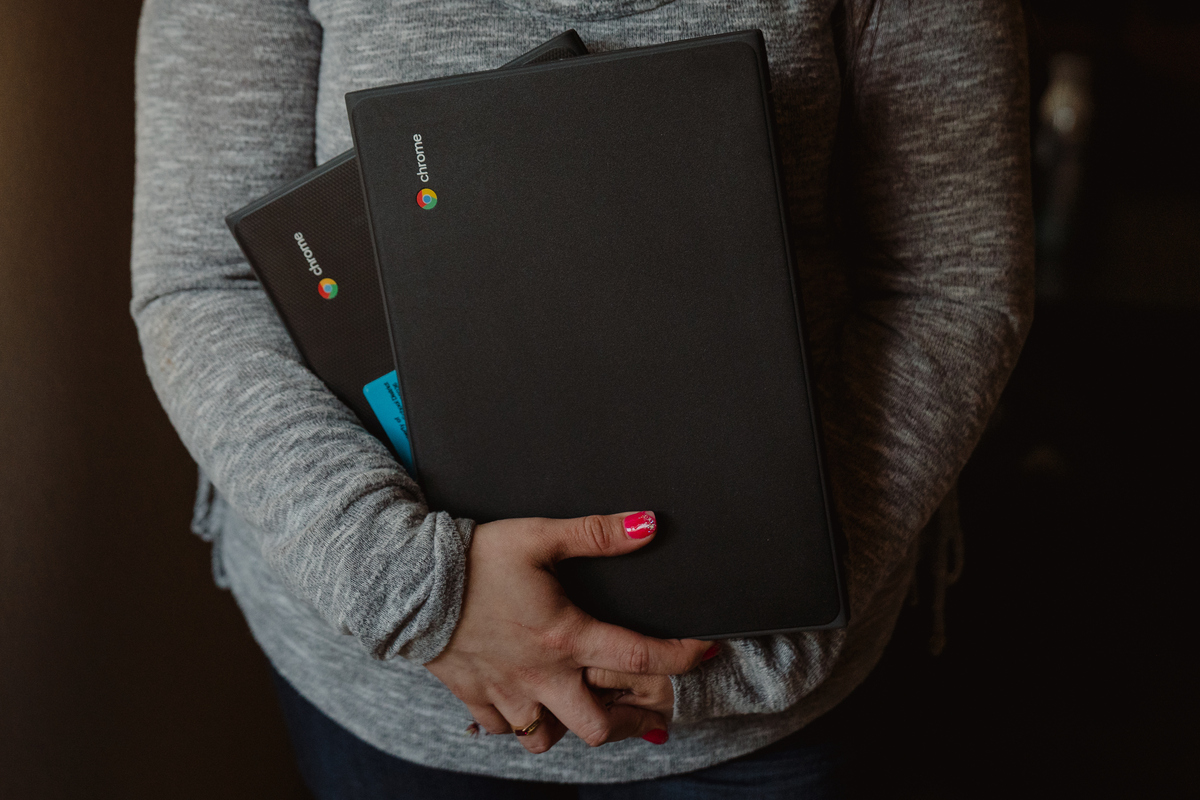 Patricia Lopez, a mother of two, enrolled in community college after losing her job at the start of the pandemic. Because she did not have a computer, the school gave her one. Her daughter, Yamely, also received a Chromebook from school.

Several college IT professionals shared similar stories. Colleges across the country have been amassing as many computers as the market will allow — so they can lend them out to students. At the University of Southern California, Joe Way, who oversees classroom technology there, purchased hundreds of additional devices for the school's laptop loaner program in the days following the university's shift to online. "As the need grows, we don't want to just keep buying more computers, because then what happens when there is a vaccine, and now we're stuck with 600 computers that we have nothing to do with," he told me in July. Instead, the school brought in a separate company to manage a long-term laptop loaner program for students. For those who pass the student needs assessment, the college foots the bill, but another company provides the computer and delivers it to the student.

Before the pandemic, Mark Aistrope ran a successful business providing technology for events and meetings, that included occasionally renting devices, like an iPad, to have during the events. Over the last five months, the events space hasn't been as lucrative as it once was, so Aistrope's company, called Meeting Tomorrow, made an essential pivot: They went all in on those device rentals. "There's a huge surge in demand for devices, and universities and K-12 schools were a huge market for us, " explains Aistrope.

The company mostly acquires and distributes refurbished laptops and Chromebooks, sourcing them from corporations or other suppliers that have retired them. To date, they work with about two dozen universities, but Aistrope anticipates that number to go up as more and more schools start mostly online fall semesters. "There are still some schools kind of waiting, trying to buy time before they put in big investments in this kind of thing," he says. He gets it. But he's also worried about the limited supply of devices, amid the surge in demand. "If colleges wait longer and longer, it becomes more and more challenging.They're not going to be able to actually procure the devices."

How to pay for it

Purchasing hundreds — or thousands — of laptops can be expensive, at a time when colleges are hurting financially from budget cuts, reduced state spending and missed revenue from housing and tuition. Previous attempts to offer laptops to every student, sometimes referred to as a 1 to 1 model, were abandoned years later due to costs and upkeep.

One idea on how to pay for laptops is to adjust a student's financial aid package to cover it. A school, through its financial aid office, can require laptops and Internet access the same way it includes textbooks in the cost of attendance, or COA, thereby allowing students to use federal student aid to cover the costs.

"They could do this tomorrow," says Abigail Seldin, a philanthropist and higher education expert who wrote an op-ed on the idea. "If schools cannot pay for the tech directly, this is the fastest available option for increasing access."

Even for schools attempting in-person semesters, access to a laptop can ensure they don't fall behind if they have to quarantine or isolate due to positive COVID tests.

At Benedict College, a small historically black college in South Carolina, officials estimate that about 24% of their student body do not have laptops. The campus is open for the fall semester, with most of the students already moved in. Even though classes won't be primarily online, the school has purchased laptops for students and plans to distribute them on campus next week.

"COVID-19 has certainly caused us to really look deeply at our demographic," says Roslyn Clark Artis, the college's president. "We thought we were already doing that," she added. "But it has certainly taught us that there are challenges our students face that we either have become numb to, or perhaps truly did not appreciate." 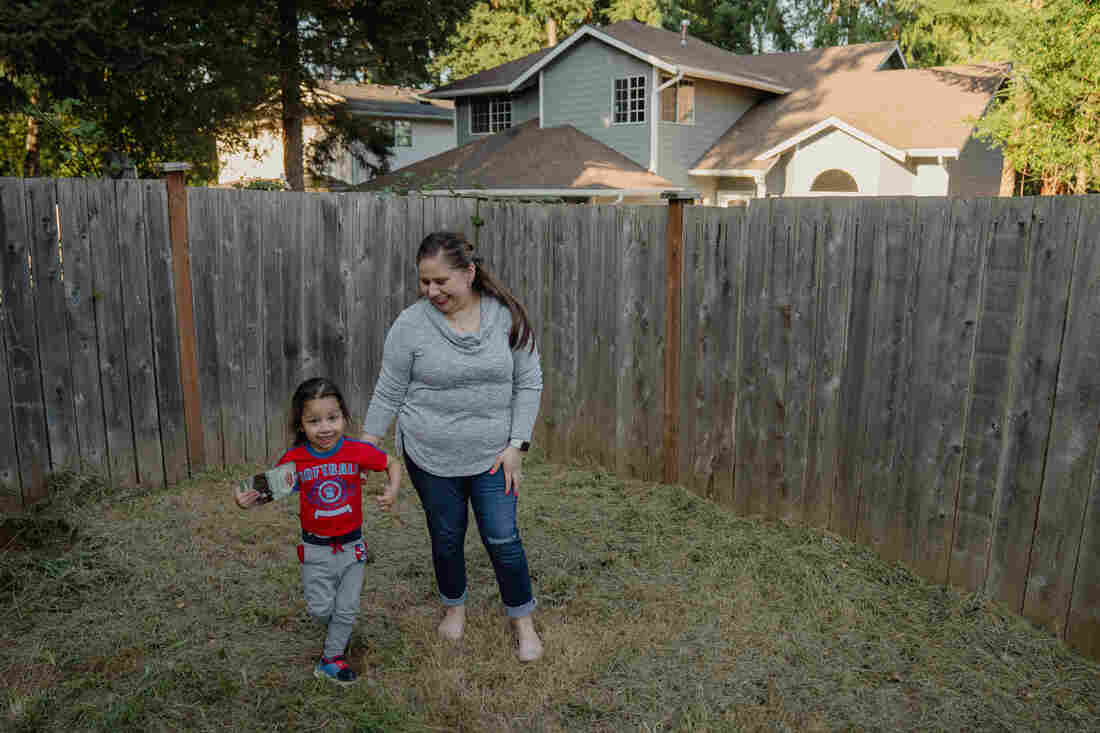 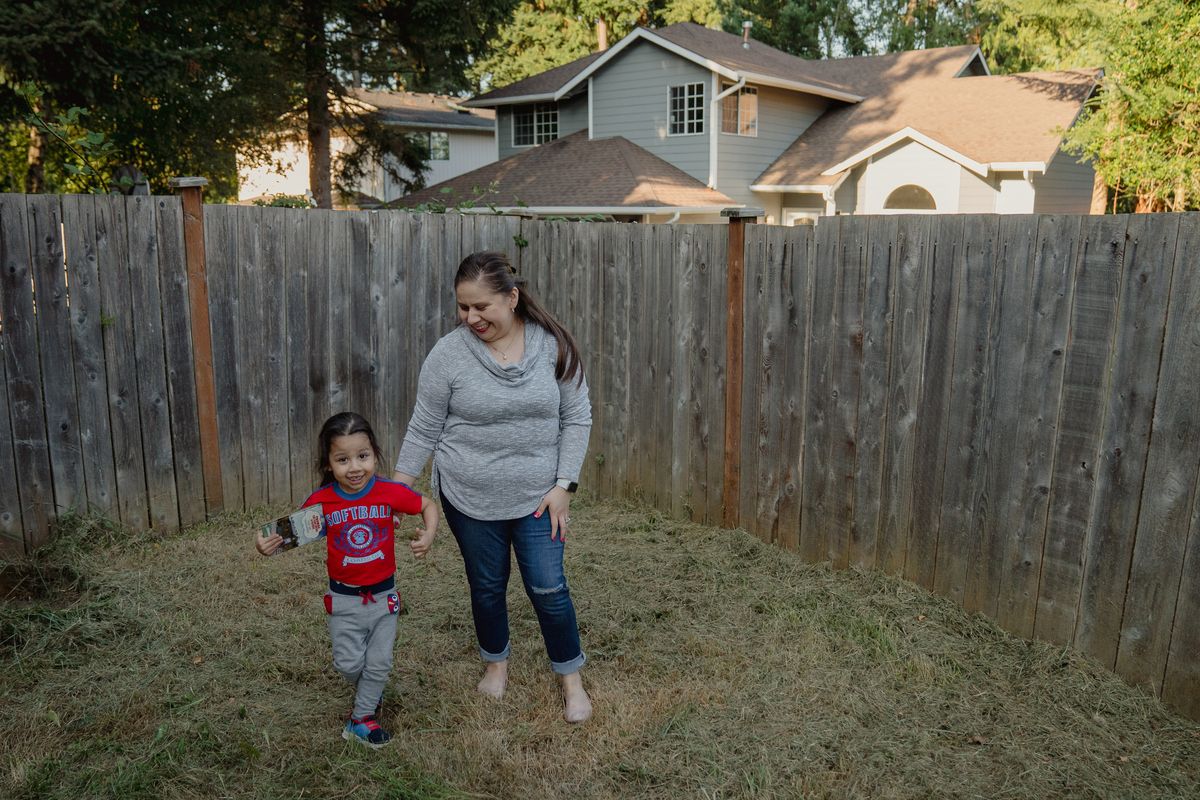 In Washington State, Patricia Lopez, who had been trying to use her iPad for school, signed up to get one of those rentable laptops that Everett Community College had. When she took her new Chromebook home, her daughter, Yamely, who'd recently been issued her own Chromebook from school, showed her how to use it.

Lopez recalls getting frustrated when she couldn't figure out how to copy and paste. Yamely was quick to instruct: "She was like, 'Mommmmm! You're just pushing this'" recalls Lopez. "And then she just started moving the whole thing, and I'm like, 'Whoa, hold on! You got to slow down for me.' "

Lopez eventually learned keyboard shortcuts; her favorite is Control - Z, which lets you undo something. "It's the simple things," she says, "anything I'm doing is just easier now." Especially that 1,000 word essay she just finished. Looking back, she says, she can't believe she thought she'd be successful without a computer at home.