Accessibility links
Trump Appointee Ousts Executives Overseeing Government Broadcasters Half a dozen top executives at the U.S. Agency for Global Media were ousted this week, the latest in a shake-up that started with the arrival of a conservative filmmaker as the agency's new chief. 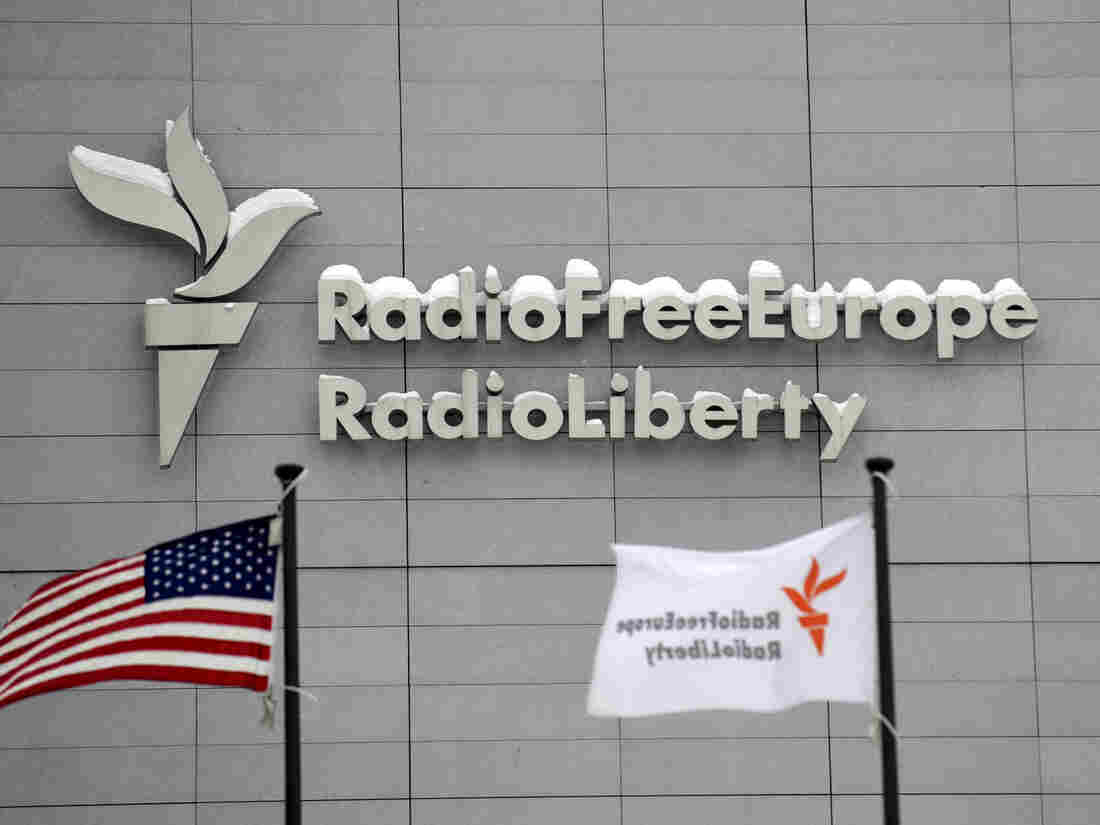 A purge at the U.S. Agency for Global Media has fueled concerns that broadcasters like Radio Free Europe will be turned into distributors of propaganda on behalf of the Trump administration. Michal Kamary/Associated Press hide caption 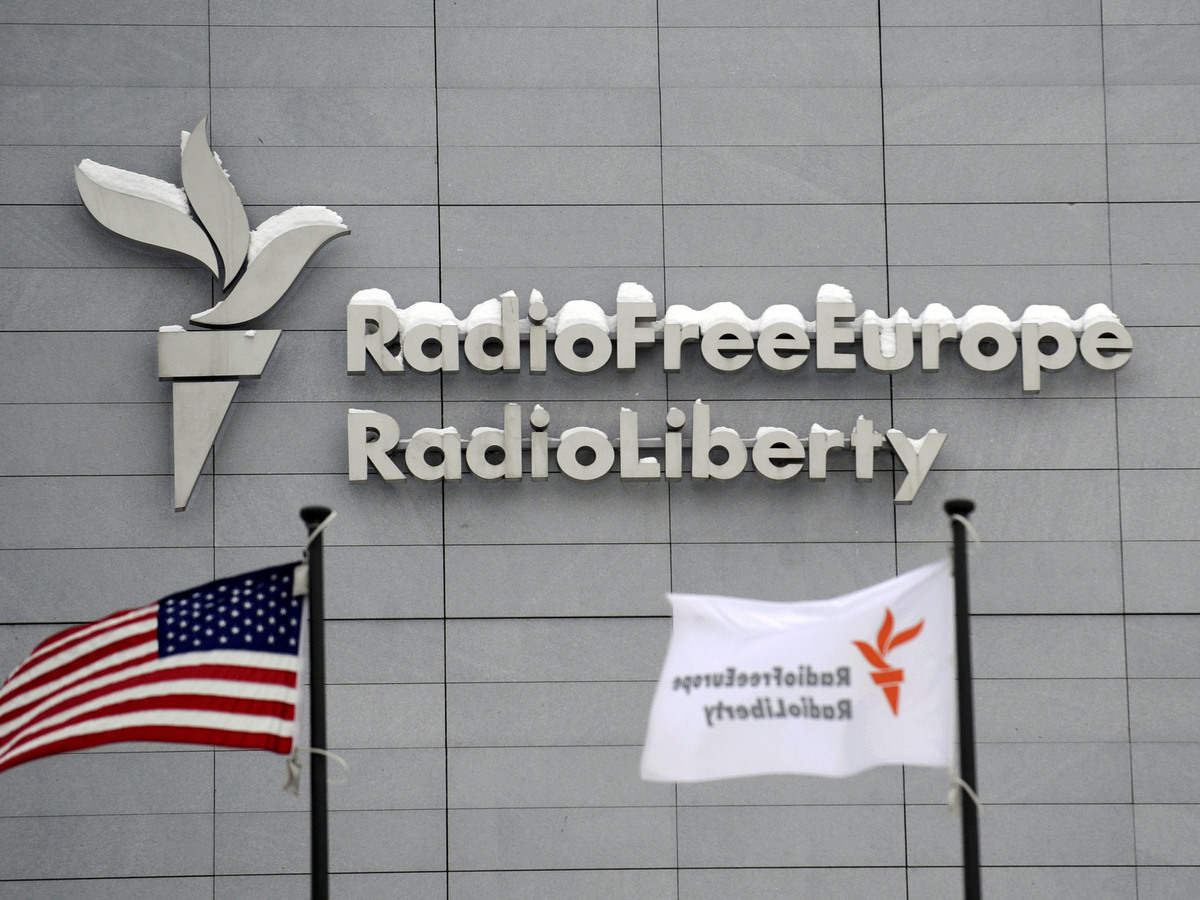 A purge at the U.S. Agency for Global Media has fueled concerns that broadcasters like Radio Free Europe will be turned into distributors of propaganda on behalf of the Trump administration.

A sweeping purge of executives at U.S. government media outlets widened this week.

At least six of the top 10 executives at the U.S. Agency for Global Media were removed from their posts on Wednesday. Critics say the housecleaning threatens to destroy the firewall meant to separate government news entities from the White House. They warn it could turn broadcasters such as the Voice of America and Radio Free Europe into distributors of propaganda on behalf of the Trump administration.

The shake-up started in June after President Trump appointed a new CEO and director at the agency, conservative documentary filmmaker Michael Pack.
Chief Financial Officer Grant Turner, who had been USAGM's acting CEO and director before Pack's arrival, is the most senior official affected. He had returned to the role of the company's chief financial officer. Now he has been put on administrative leave.

All also had their security clearances suspended.

Asked about the purge, a USAGM spokesperson — who insisted on not being named — said in an email that his agency "is unable to comment on individual personnel matters."

"We took action to restore integrity to and respect for the rule of law in our work at USAGM," the agency spokesperson said in a prepared statement. "We will take additional steps to return this agency to its glory days."

The reference to the "rule of law" could be seen as a reference to an ongoing internal investigation at the agency. In a July 23 staff email, Pack said there had been "systematic, severe and fundamental security failures," according to a report posted Friday on VOA's website. The probe is being done, Pack said, because "the failures identified compromise the agency's ability to fulfill its mission, undermine the efficiency and effectiveness of the federal workforce, and pose a threat to U.S. national security."

Last week, Pack made public a confidential July 97-page report from the Office of Personnel Management that faults the screening of foreigners working at USAGM and the entities it oversees. It criticizes the agency for overstepping federal rules by requiring extensive information about the personal finances of those being vetted.

Ousted agency officials scoff at the allegation of security lapses. "The OPM report really is kind of a cover to move people out," says Turner, the sidelined CFO. "If anything, we have tried to have a stricter standard in security investigations."

"This is a pretextual purge," Kligerman added in an interview. "I think it's designed to remove the career leadership of the agency — the people who are in charge of enforcing the rules and norms."

Turner tells NPR that in his many years working in Washington under both Republican and Democratic presidents, he has never seen anything quite like what has happened at USAGM since Pack became its leader.

"There's gross mismanagement on such an enormous order," Turner says. "I don't know if it's intentional or simply incompetence, or if it's a kind of malevolence. It's probably a badge of honor to be fired by folks in this administration."

As an example of the new climate pervading the agency, Turner cites the removal of a photo of former USAGM CEO and president, John Lansing, that had hung on the wall in the main hallway. Also removed was a quote from Lansing that read, "A set of unimpeachable facts, and the existence of a baseline of truth, is the foundation that undergirds our democracy, its institutions, and the health, safety and security of all American citizens."

Lansing, who is now NPR's president and CEO, issued a statement sharply criticizing the latest personnel ousters at USAGM as well as the forced departure in June of the heads of global media organizations such as the Voice of America. He called those affected "some of the finest public servants I have ever had the privilege to work with."

"Pack's attempt to discredit them is merely a smokescreen for his attempt to dismantle the legitimate editorial independence of VOA in favor of propagandizing the Agency to favor the Administration," he said.

Lansing added that such action would violate the law establishing USAGM and the broadcasters it oversees. "Dismantling the Agency and converting it to an American version of propaganda would serve only to discredit 75 years of distinguished work and would serve to prop up and legitimize authoritarian media control around the world."

Agency insiders say visa extensions for foreign staffers employed at USAGM were abruptly put on hold in June, raising fears that some may have to return to authoritarian countries such as China and face harsh reprisals for their work in the U.S.

Turner and others describe a climate of fear and self-censorship among those who still have their jobs at the agency.

"Here are a bunch of civil servants who want to do things by the book," the former acting CEO and director of USAGM says of the purge. "They don't want to play by the book."

Pack will likely have some explaining to do when he appears before a Sept. 24 hearing of the House Foreign Affairs Committee, which has oversight of USAGM.

"Michael Pack is once again attempting to purge USAGM of the apolitical, career officials who have helped ensure that the agency fulfills its mission to provide unbiased news and information around the world," declared Rep. Elliot Engel, the New York Democrat who chairs that committee.

"He is destroying the decades-old legacy of America's international broadcasting efforts," Engel added, "in a clear attempt to transform the agency into an ideological mouthpiece to promote Donald Trump in advance of the election."

Disclosure: Due to NPR CEO John Lansing's prior role at the U.S. Agency for Global Media, no senior news executive or corporate executive at NPR reviewed this story before it was published.

A previous version of this story misspelled Oanh Tran's first name as Oahn. In addition, the story had referred to John Lansing as the first CEO of the U.S. Agency for Global Media. He was CEO when the agency adopted its current name to better reflect its purpose. However, the consolidation of the government's international broadcasters goes back decades.