Accessibility links
Analysis: Post Office Delays Plague Mail In Key Swing States The U.S. Postal Service is not meeting goals for on-time mail delivery, a worrying sign as millions of Americans are expected to vote by mail in November. 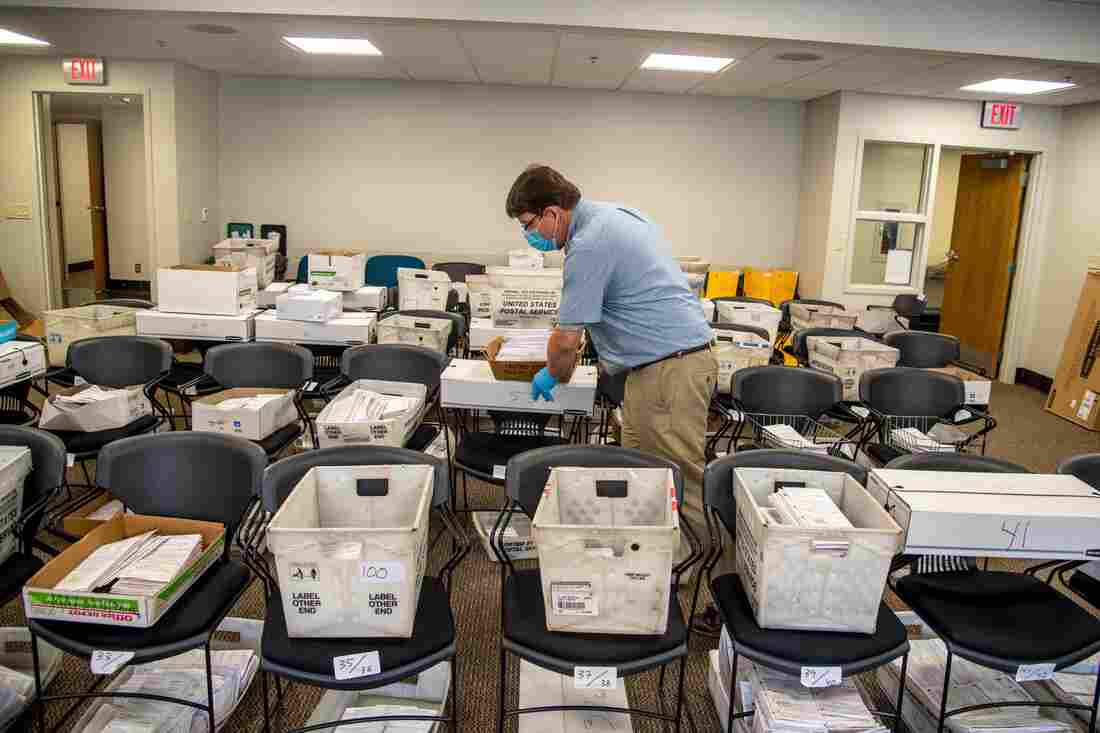 Election official Jim Fortner places a crate of sorted absentee ballots with others from the same ward at the Madison, Wis., City-County Building on Aug. 5, 2020. Delays and failure to deliver absentee ballots in Wisconsin and other key swing states have sparked concerns about how well the November presidential election will be managed during the pandemic. Will Cioci/Wisconsin Watch/APM Reports hide caption 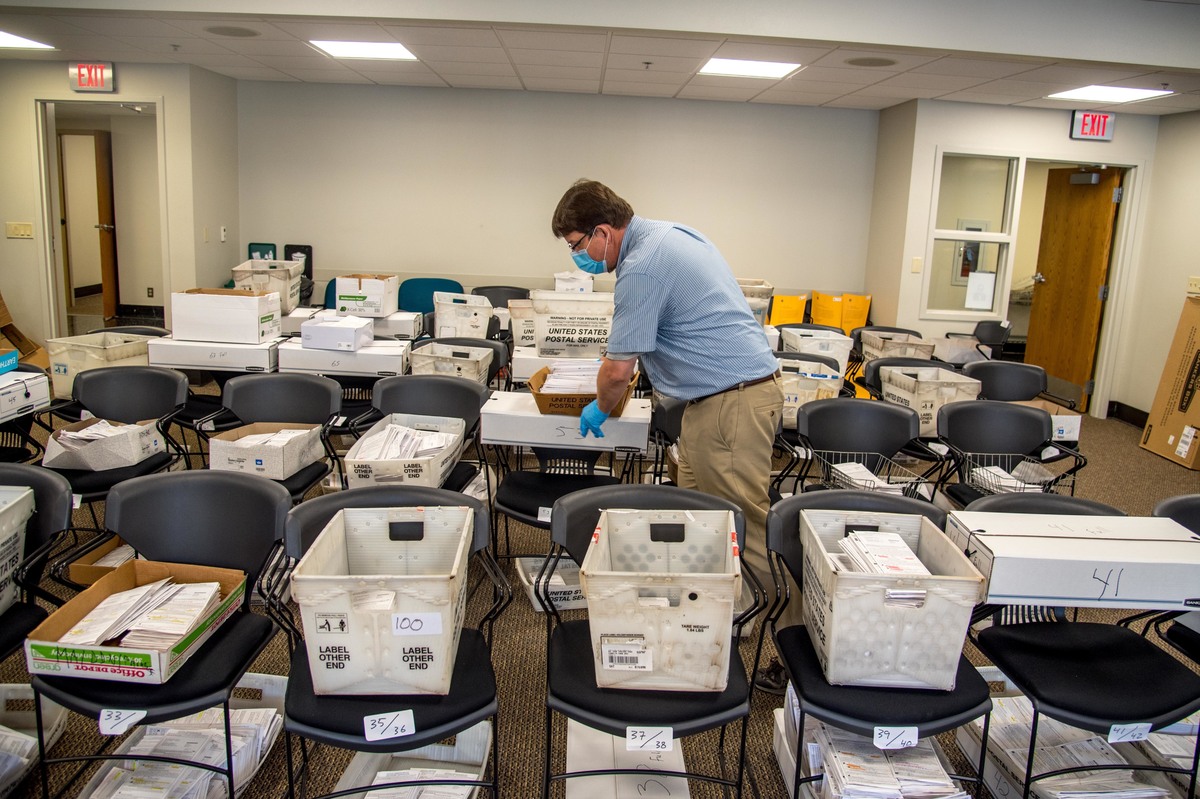 Election official Jim Fortner places a crate of sorted absentee ballots with others from the same ward at the Madison, Wis., City-County Building on Aug. 5, 2020. Delays and failure to deliver absentee ballots in Wisconsin and other key swing states have sparked concerns about how well the November presidential election will be managed during the pandemic.

Based on its own performance measures — and the loss of hundreds of Wisconsin ballots on their way to voters this summer — the U.S. Postal Service has its work cut out for it before Election Day.

Among the 13 postal districts serving key presidential battleground states, four failed to meet any on-time service goals handling first-class mail between April 1 and June 30, and six districts achieved only one.

The laggards are in five battleground states — Pennsylvania, Michigan, Florida, Wisconsin and North Carolina — politically competitive blends of urban and rural voters that will likely determine the presidential election.

Three of the postal districts with the worst records represent the largest metropolitan areas in their respective states — Philadelphia, Detroit and Milwaukee, Democratic strongholds in states that propelled Donald Trump to victory in 2016, according to an analysis by APM Reports.

Any other year, a steady underperformance of mail delivery in swing states would go unnoticed. This year, though, the delivery rates released Monday have taken on outsized importance: They may foreshadow ballot counting controversies to come.

"I believe it is highly likely that in the November General Election, the absentee ballots of at least tens of thousands of voters will arrive at election offices after Election Day and will not be counted unless the Ballot Receipt Deadline is extended," wrote Ronald Stroman, the deputy postmaster general from 2011 until June 1, in a recent court filing challenging the Wisconsin deadline for ballot submission.

Lawyers representing Democrats, voting rights and civil rights groups are suing to allow ballots to count even if the ballot envelopes have not yet arrived at polling sites but are postmarked by Election Day.

On-time mail delivery nationally already is suffering as a result of the coronavirus pandemic, presenting a worrisome picture for November as a rapidly rising number of people choose to steer clear of COVID-19 and vote by mail.

"When I have people telling me that they're going days without getting mail, that makes me nervous," said Tina Barton, city clerk for Rochester Hills in Michigan, where on-time delivery rates are among the lowest in the country.

There's also worry — mostly among Democrats — that such delays could worsen under recent management changes by U.S. Postmaster General Louis DeJoy, a major donor to the Republican National Committee and to President Trump, who has repeatedly falsely claimed that mail-in voting is rife with fraud. Three months into the job, DeJoy has ended overtime and insisted that trucks leave on time even if mail isn't fully loaded.

A spokeswoman for the postal service declined an interview request but issued a statement saying it is "committed to fulfilling our role in the electoral process." She also noted that delivery standards, in place for many years, have not changed.

Over the past decade, the consolidation of postal service processing centers now means mail can sometimes travel hours for processing and sorting even if the destination is blocks away.

In Wisconsin, elections officials continue to have problems with ballots not being delivered to voters. Nearly 700 voters in the cities of Milwaukee and Wauwatosa did not receive ballots they requested in late June for the Aug. 11 primary.

The previously unreported missing deliveries follow April's breakdown when thousands of ballots weren't delivered on time during the state's primary.

Wisconsin voters, like those in much of the country, continue to request absentee ballots in record numbers: 894,786 absentee ballots were issued for the August 11 primary — roughly eight times the number of ballots issued in 2016.

APM Reports analyzed the on-time percentage scores for first-class mail, the type of mail recommended by the postal service for mailed ballots. Reporters then compared the scores with the postal service's targets for overnight and two-day delivery standards, which are likely to be applied to mail sent and received locally.

On-time mail delivery mattered during Wisconsin's April primary. In addition to the failed delivery of hundreds of ballots to voters, 81,000 ballots were delivered after the primary, according to the Wisconsin Elections Commission. Of those, 79,054 ballots were only accepted because of a court ruling. 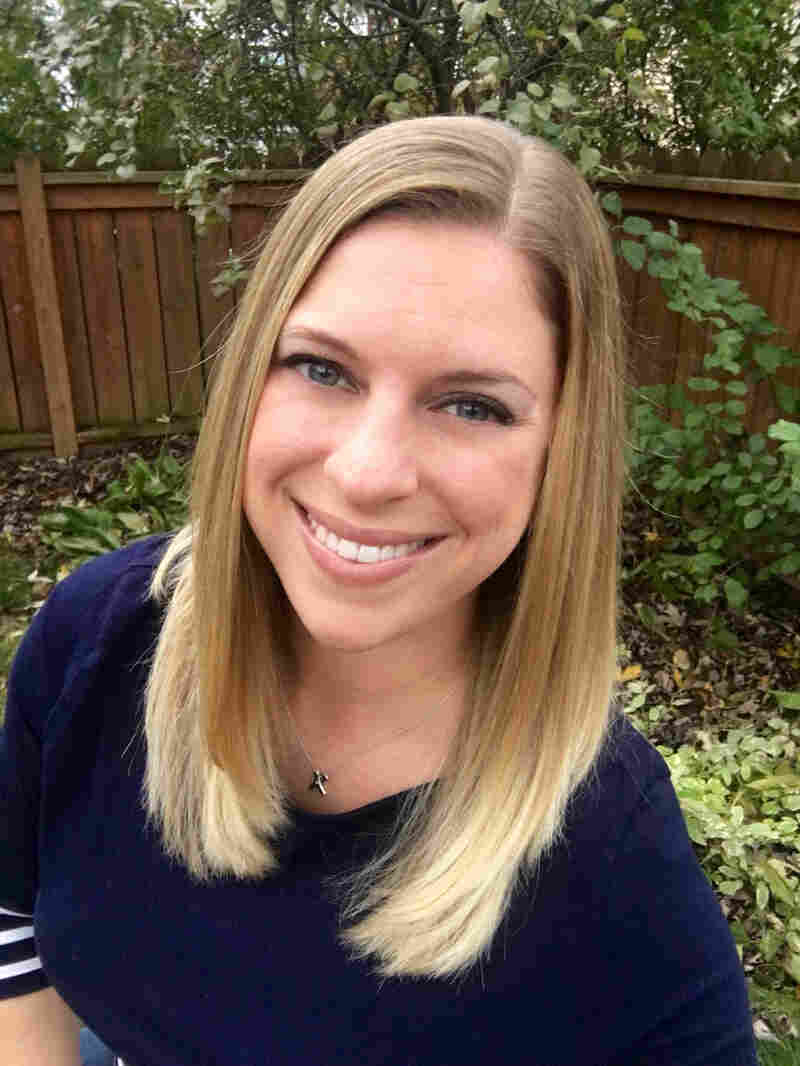 Wauwatosa, Wis., resident Aliza Werner was among more than 400 voters in that Milwaukee suburb who did not receive requested absentee ballots for the state's Aug. 11 partisan primary. After officials sent the ballots again after, Werner dropped her ballot off to make sure it was received. She worries postal mix-ups could jeopardize the results of the November election. Courtesy of Aliza Werner hide caption 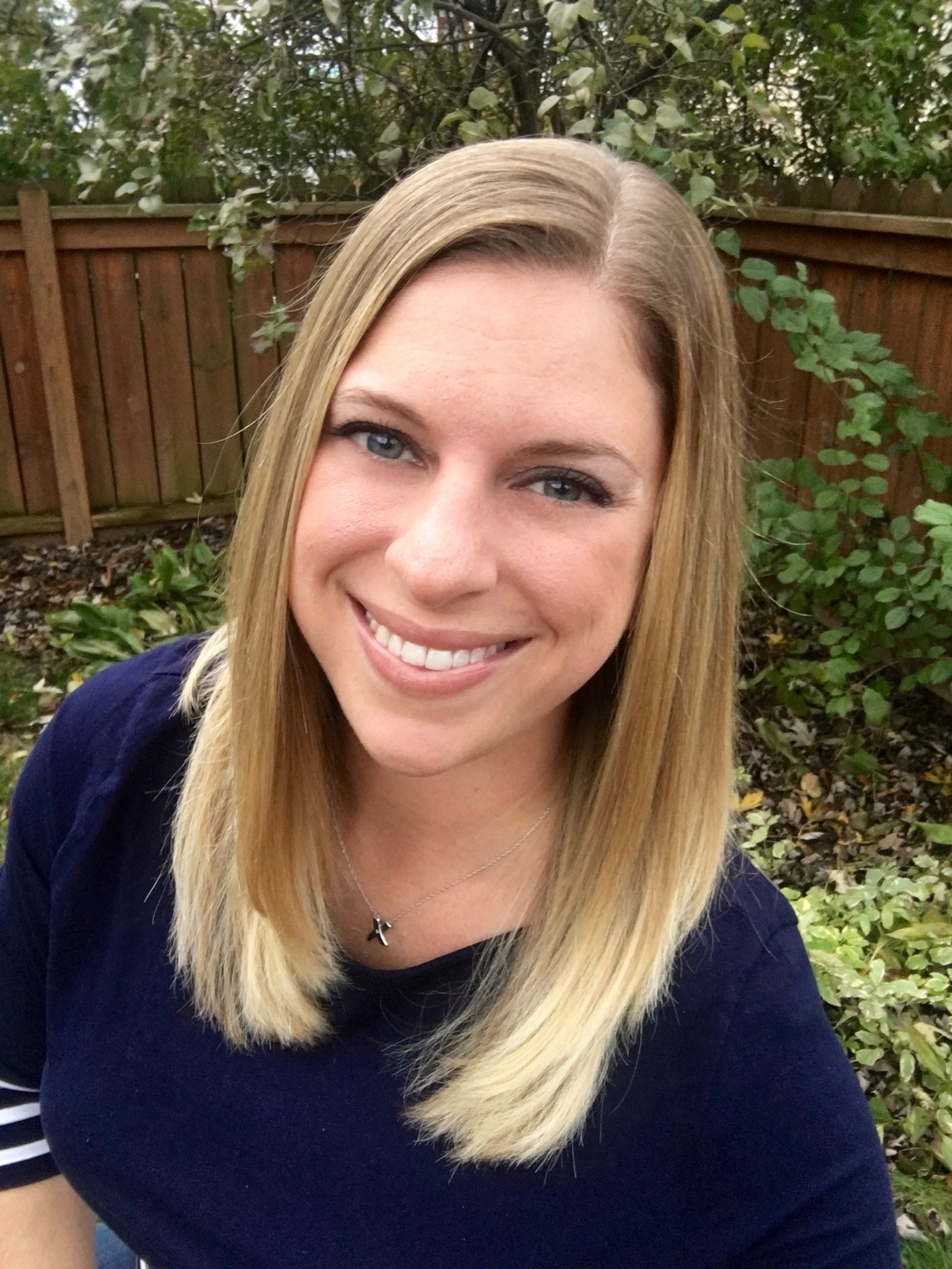 Wauwatosa, Wis., resident Aliza Werner was among more than 400 voters in that Milwaukee suburb who did not receive requested absentee ballots for the state's Aug. 11 partisan primary. After officials sent the ballots again after, Werner dropped her ballot off to make sure it was received. She worries postal mix-ups could jeopardize the results of the November election.

Aliza Werner and her husband, Nick, are regular voters but very cautious about going out in public during the pandemic. The couple from Wauwatosa, Wisconsin requested absentee ballots June 25 — six weeks before the election — for the Aug. 11 partisan primary.

Werner says she kept checking myvote.wi.gov, the website operated by the Wisconsin Elections Commission, for the status of their ballots. In June, clerks were able to print barcodes on outgoing ballot mailings that would allow the ballot to be tracked as it traveled through the mail.

"At one point where it said it was in process or was submitted, it was approved, they were preparing it — and it never went beyond that," Werner recalled.

When ballots didn't arrive after a month, Werner called the Wauwatosa City Clerk's Office and was told their ballots had been in a batch that never made it to voters' homes.

"The only thing that they could think of was that something happened within the postal service, that they were not mailed to us," Werner said.

The couple ordered new ballots, and she dropped them off at Wauwatosa City Hall to make sure they arrived. But she wonders what will happen in November when "a whole lot more people that are going to be requesting absentee ballots."

In Wauwatosa, less than 10 miles west of downtown Milwaukee, a spokeswoman confirmed that 421 ballots mailed in late June to residents were never delivered. Elections officials aren't sure if the postal service or the city's mail vendor is at fault. A mail vendor places postage and tracking information on the envelopes for the city. The city clerk canceled the initial ballots and mailed another batch to the affected voters.

Approximately 270 ballots mailed by the city of Milwaukee on June 29 also went missing. They were accounted for when they were handed over to the vendor, said Claire Woodall-Vogg, director of the Milwaukee Election Commission. She said the cause of the breakdown could not be determined.

Woodall-Vogg says the affected ballots were canceled and new ballots sent to voters. In November, the city will hand-deliver the ballots to the postal service to ensure there are no problems with a third-party vendor, she said.

The missing ballots in Wauwatosa and Milwaukee come just months after the postal service was criticized for how it handled mail-in ballots during the April primary.

On the day after the polls closed, the postal service discovered three tubs of ballots at the Milwaukee processing center destined for voters in Appleton the Oshkosh. Postal service employees also failed to deliver ballots to voters in Fox Point. 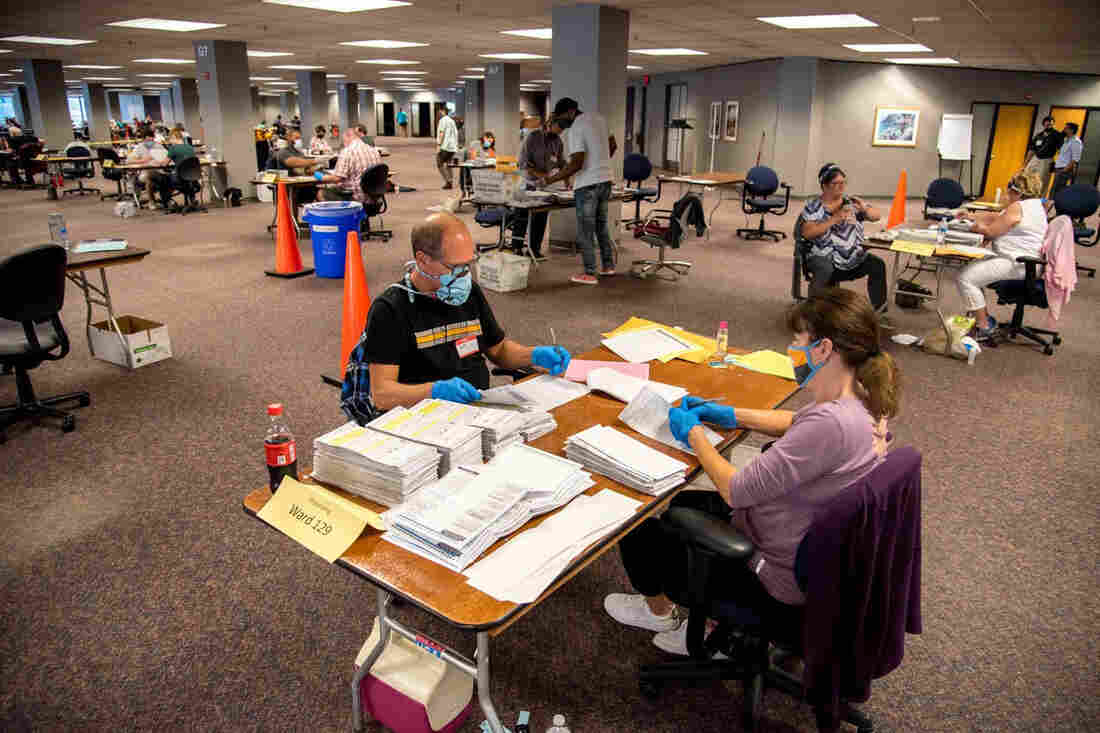 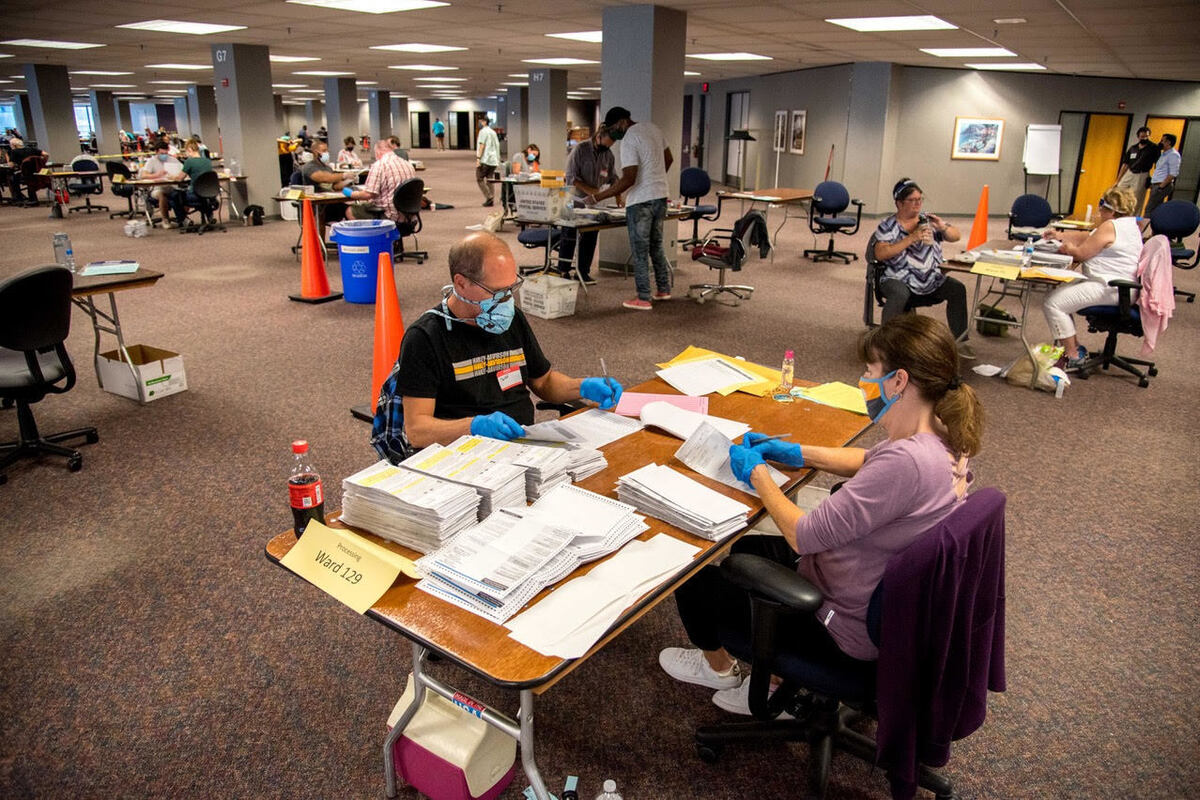 The postal service says it is meeting regularly with elections officials to discuss election mail and ballot design and will take steps to ensure better monitoring of election mail. In addition to the barcodes now added to many outgoing Wisconsin ballots, the state also plans to issue absentee ballot applications to every registered voter to help take the workload off local elections officials and encourage voters to request a ballot sooner.

"I've been assured by our district manager that they will be doing everything they can to make sure all the mail gets delivered timely," said Barbara Goeckner, an official with the village of Cambridge.

"I have to say that that is a very big concern across the nation for postal mail, and election mail," she said.

In Lansing, Michigan, mail is processed 65 miles away in Grand Rapids, said Chris Swope, the city clerk. While the consolidation saves money, it can be a problem for voters who wait until the last minute to put their ballot in the mail. "It used to be in Lansing, if you mailed it today, the person in Lansing would get it tomorrow, and that's generally not true anymore," Swope said.

DeJoy says the post office should not be blamed if state laws allow voters to request and return an absentee ballot too close to the election to meet delivery standards. He also pledged the postal service could meet the standards despite the expected "unprecedented" increase in election mail.

But officials with the unions representing 200,000 postal employees say DeJoy's efforts to curtail overtime will slow down the delivery of by-mail ballots.

"It's not going to undermine the integrity of the ballot, the safety of the ballot or the privacy of the ballot," said Mark Dimonstein, president of the American Postal Workers Union. "But it's certainly going to make it more challenging for the states who run elections."

This story was reported in collaboration with APM Reports, the investigative and documentary journalism team at American Public Media. The nonprofit Wisconsin Watch (wisconsinwatch.org) collaborates with Wisconsin Public Radio, PBS Wisconsin, other news media and the University of Wisconsin-Madison School of Journalism and Mass Communication. All works created, published, posted or disseminated by Wisconsin Watch do not necessarily reflect the views or opinions of UW-Madison or any of its affiliates.