Accessibility links
It's 'Part Of The Game': Vhils Isn't Bothered When His Work Is Demolished Portuguese street artist Alexandre Manuel Dias Farto — aka Vhils — makes art on dilapidated buildings. He uses a chisel, a drill and explosives in a process he calls "creative destruction." 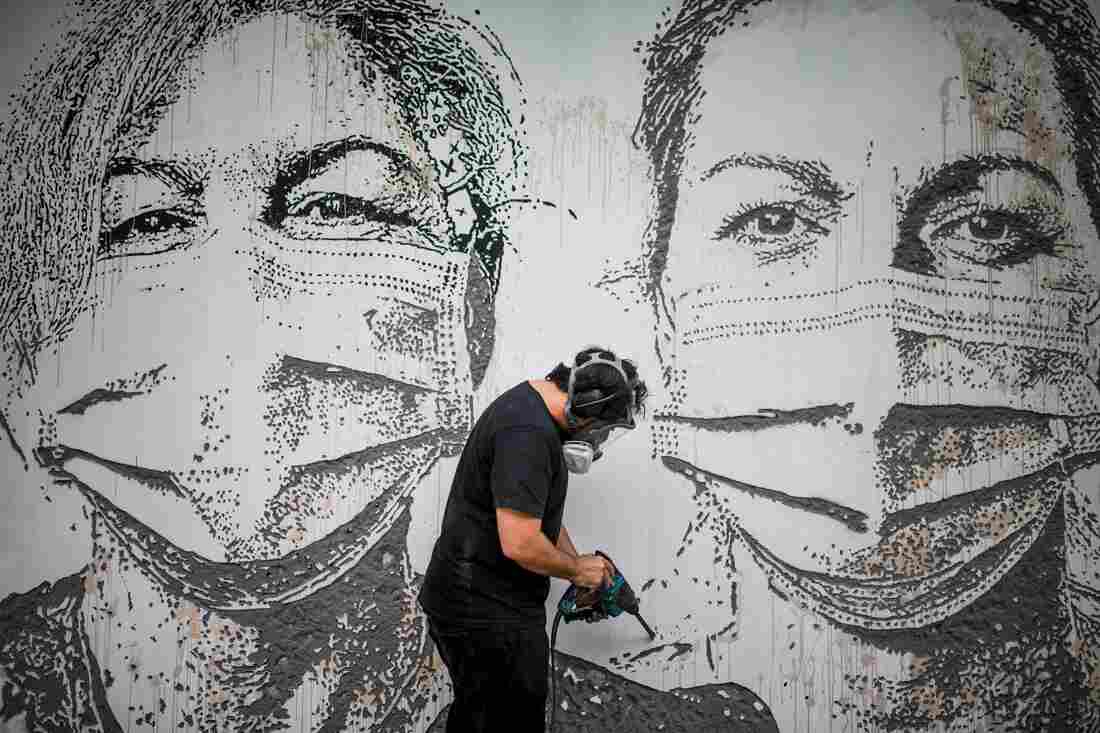 A guy in his 30s, handsome behind his mask (this is pre-pandemic), carries a chisel, drills, jigsaws, sometimes explosives, and walks up to a dilapidated wall. Looks like trouble. What's going on? Is he on a march toward destruction? Yup. Sorta. About to create graffiti? Nope. Make something beautiful? Yup. 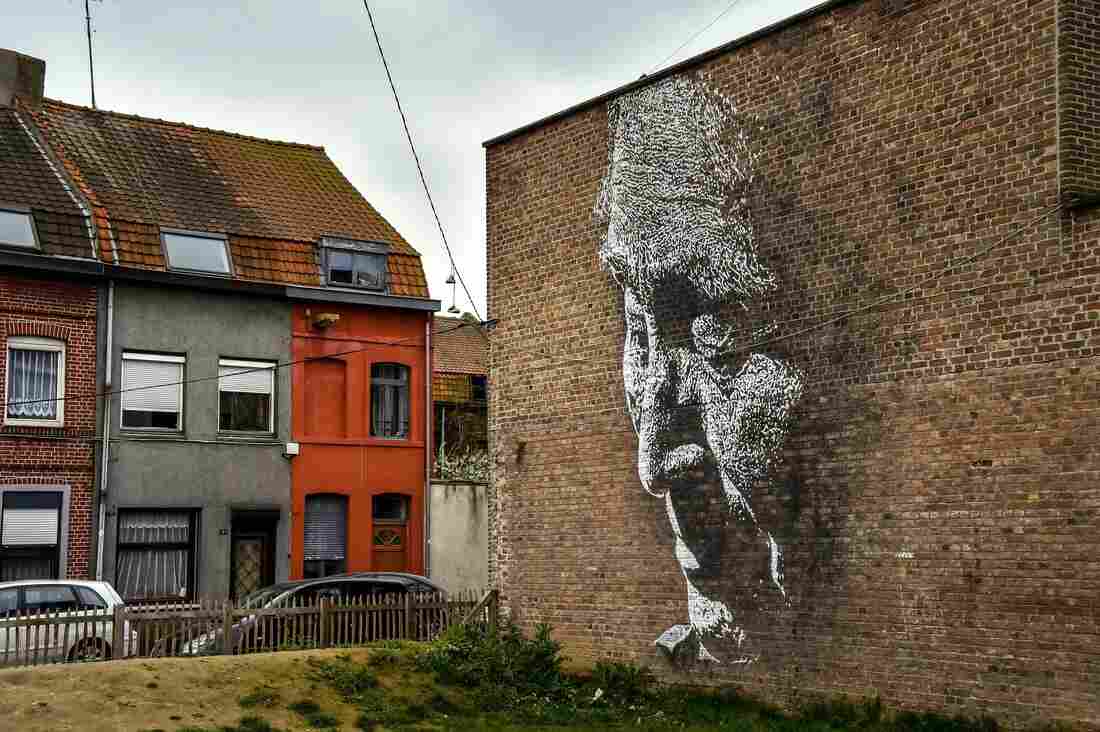 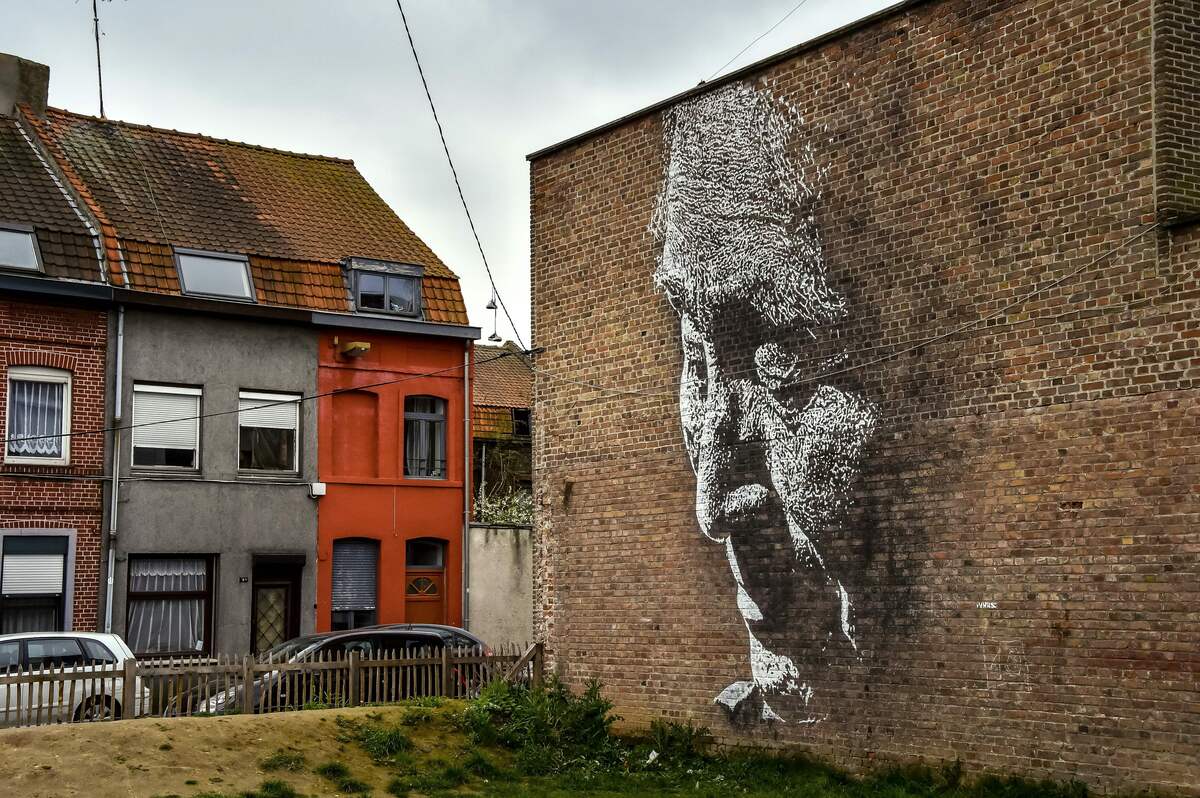 A Vhils work at La Condition Publique in Roubaix, in northern France, in March 2017.

He's a Portuguese street artist named Alexandre Manuel Dias Farto. His street name is Vhils. (Portugal Confidential says the tag Vhils "has no meaning, except that V-H-I-L and S are his favorite and fastest letters to write with paint.") He works all over the world — Europe, Asia, in this country Las Vegas, Chicago, Miami, San Diego — and Cincinnati. The Contemporary Arts Center there is giving him a big exhibition. They re-opened July 1, but their extensive and impressive online show is still up, and it gives you a sense of his amazing work.

Although he gave it up, Vhils' early inspiration was protest graffiti like this: 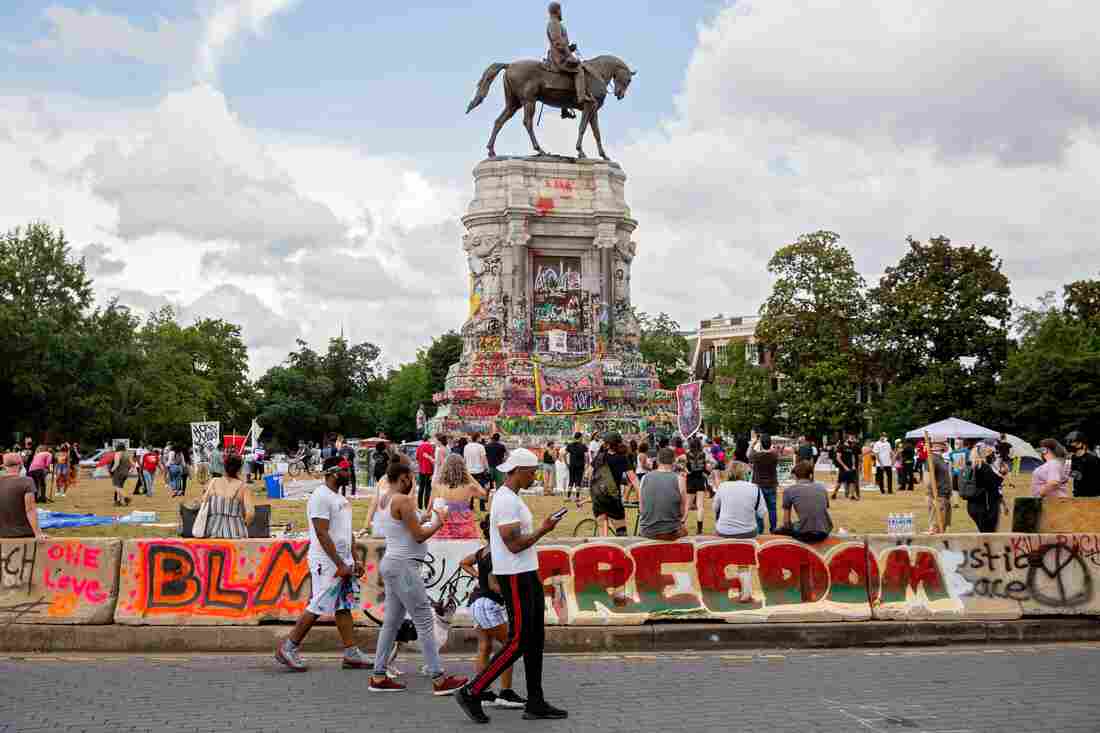 Vhils' work is not overtly political, although he has his issues: globalization, preservation, history.

The way he works is new. He calls it "creative destruction." With his tools, "he will literally chisel into the wall and uncover what's under the first layer [paint or stucco or posters]," says Cincinnati Contemporary Arts Center director Raphaela Platow. "Sometimes he chisels down to the brick." See him in action:

So Vhils' method is destructive, but also productive. A search. "Almost like an archaeological project where the layers of a building are excavated," Platow says. Peeling away, to reveal what's underneath ... and underneath, and again underneath.

Platow says, "he is taking away, in order for a face to emerge." The faces belong to people he meets in neighborhoods he prowls, searching for the wall he wants to chisel. "Shopkeepers, janitors, school kids," Platow says. He shmoozes with residents, asks about their stories, takes their photo. 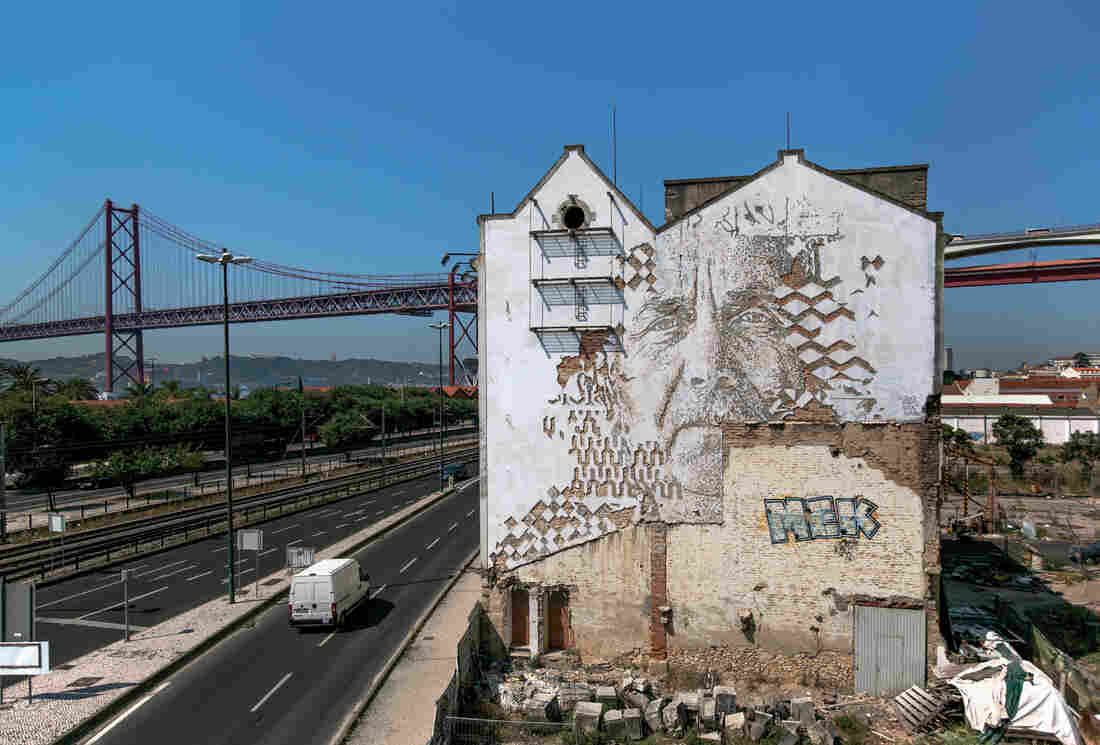 Vhils finds faces in walls — like this one in Lisbon, Portugal, in 2014. Alexander Silva/Vhils hide caption

Once he's found his building — dilapidated usually, likely to be demolished — he gets permission to tackle the wall, projects a face onto it (re-sizing and manipulating the photo on his computer so it fits properly), and then traces the image onto the wall. Some faces can be six stories high. Nice big canvas. Other faces hide in tunnels. 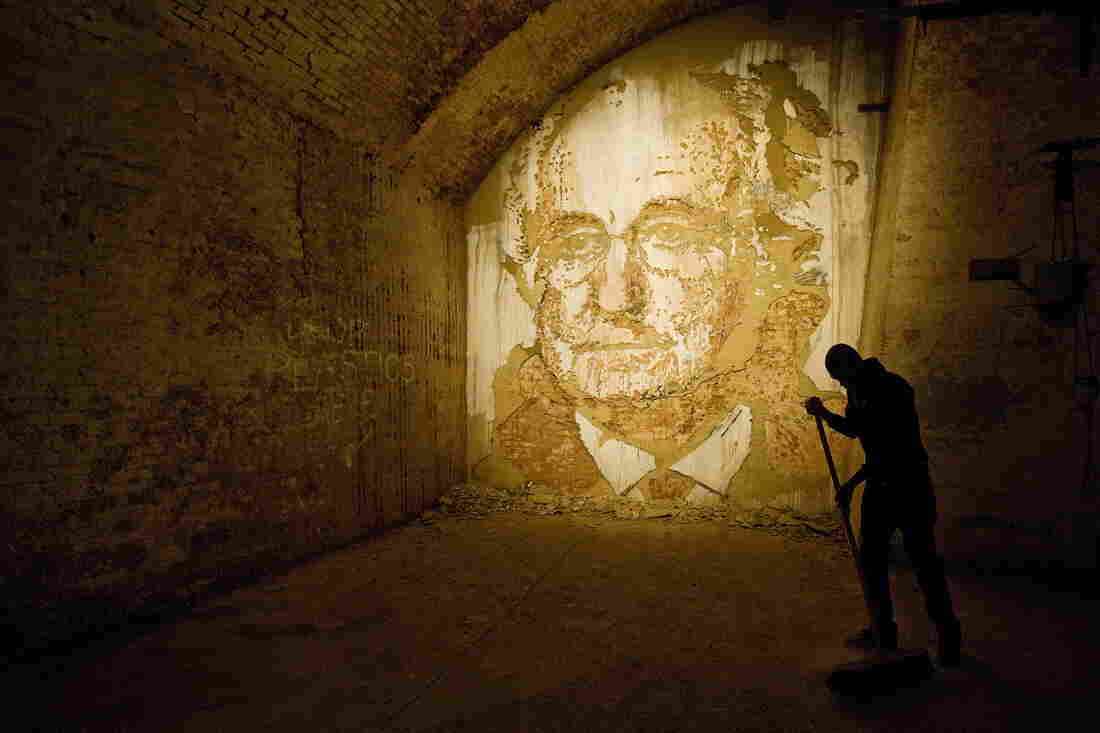 Bernie Made Off in the Old Vic Tunnels in south London in October 2010. Leon Neal/AFP via Getty Images hide caption

Vhils is interested in how cities are changing as the world becomes more global. The wear and tear of his buildings show some history. His tools reveal the history, the layers of it. Platow says he's driven by, "this whole notion of what has to be removed in order to have new things." His walls are, "ever evolving histories and show the pulse of a place." They animate a city.

And then, in time, the walls disappear. The faces are gone. The building is demolished. That's fine with Vhils. "Part of the game," he told Portugal Confidential. "It only gives you more incentive to produce more work. Nothing lasts forever anyway, not even gallery-based work, and the important thing is what it might give people while it's there." 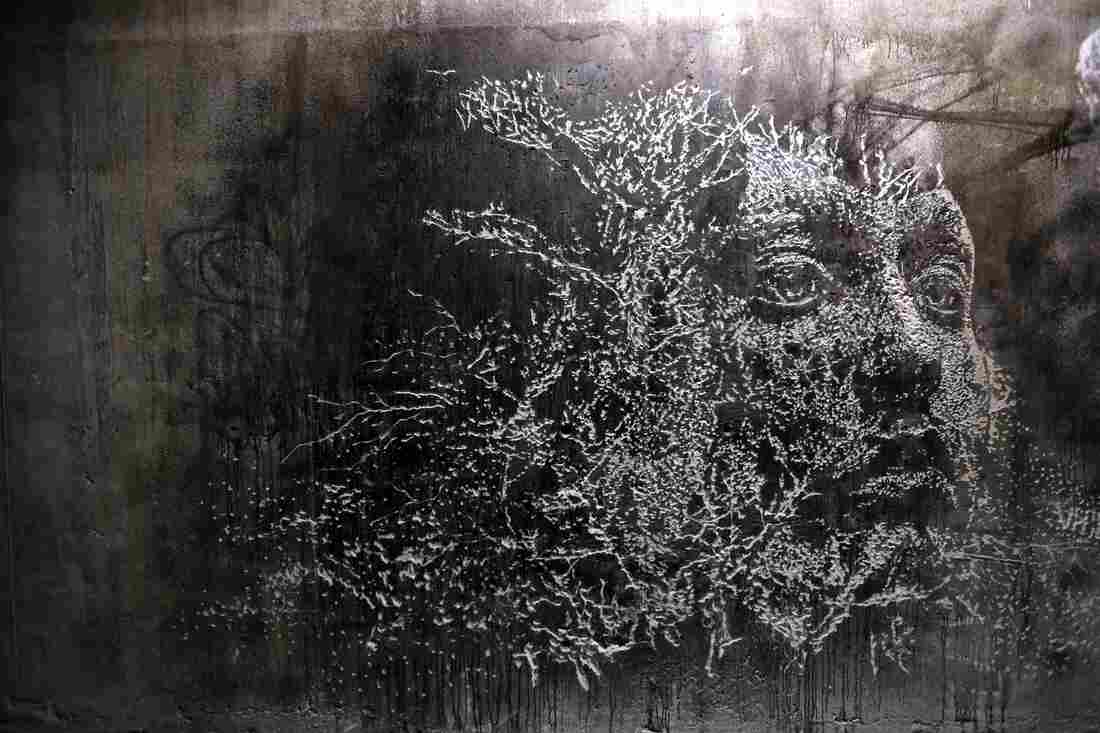 A Vhils work at the Palais de Tokyo in Paris in May 2014. Francois Guillot/AFP via Getty Images hide caption

Art Where You're At is an informal series showcasing lively online offerings from museums while their buildings are closed due to COVID-19. (Or in the case of Cincinnati's Contemporary Arts Center, slowly re-opening.)