Accessibility links
The Nudge And Tie Breaker That Took Women's Suffrage From Nay To Yea Tennessee was the final state needed to ratify the amendment that secured women the right to vote. At the last moment, a young state legislator switched his vote to yes after his mom asked him to. 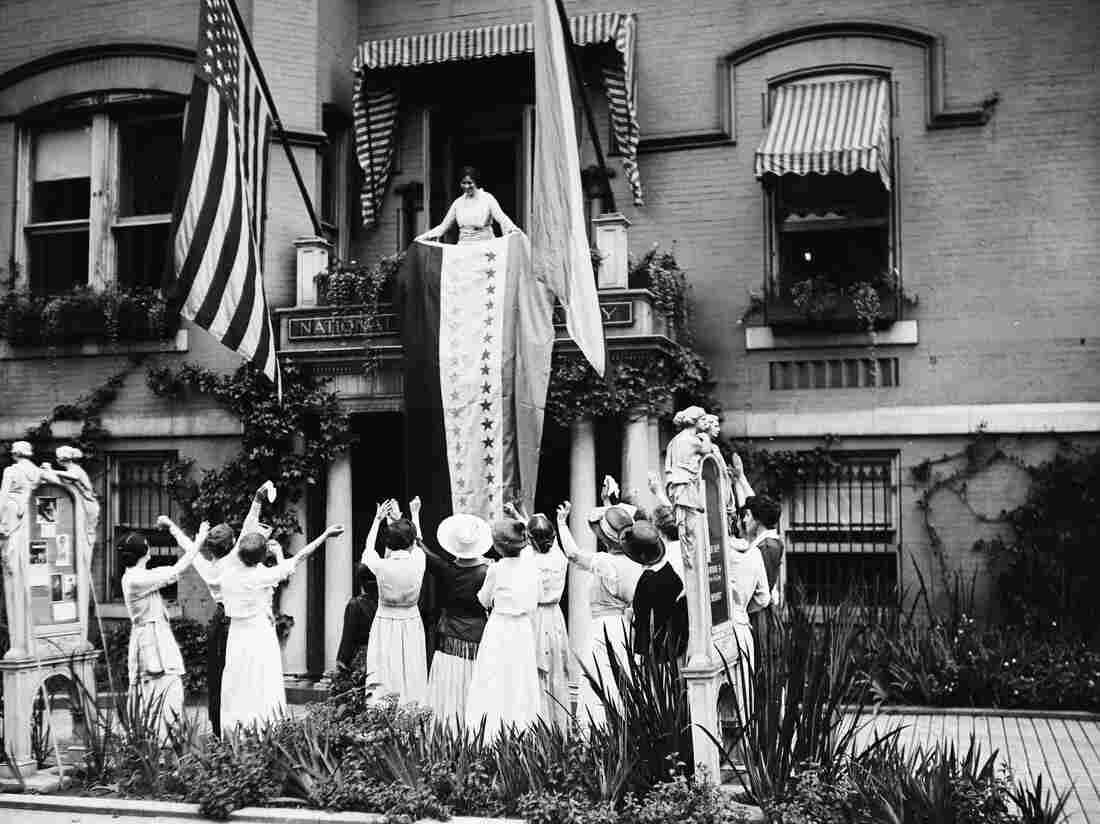 Alice Paul, a leader of the National Woman's Party, unfurls the ratification banner with its new 36th star after Tennessee ratified the 19th Amendment on Aug. 18, 1920. The amendment prohibits denying the right to vote based on sex. Harris & Ewing/Library of Congress hide caption 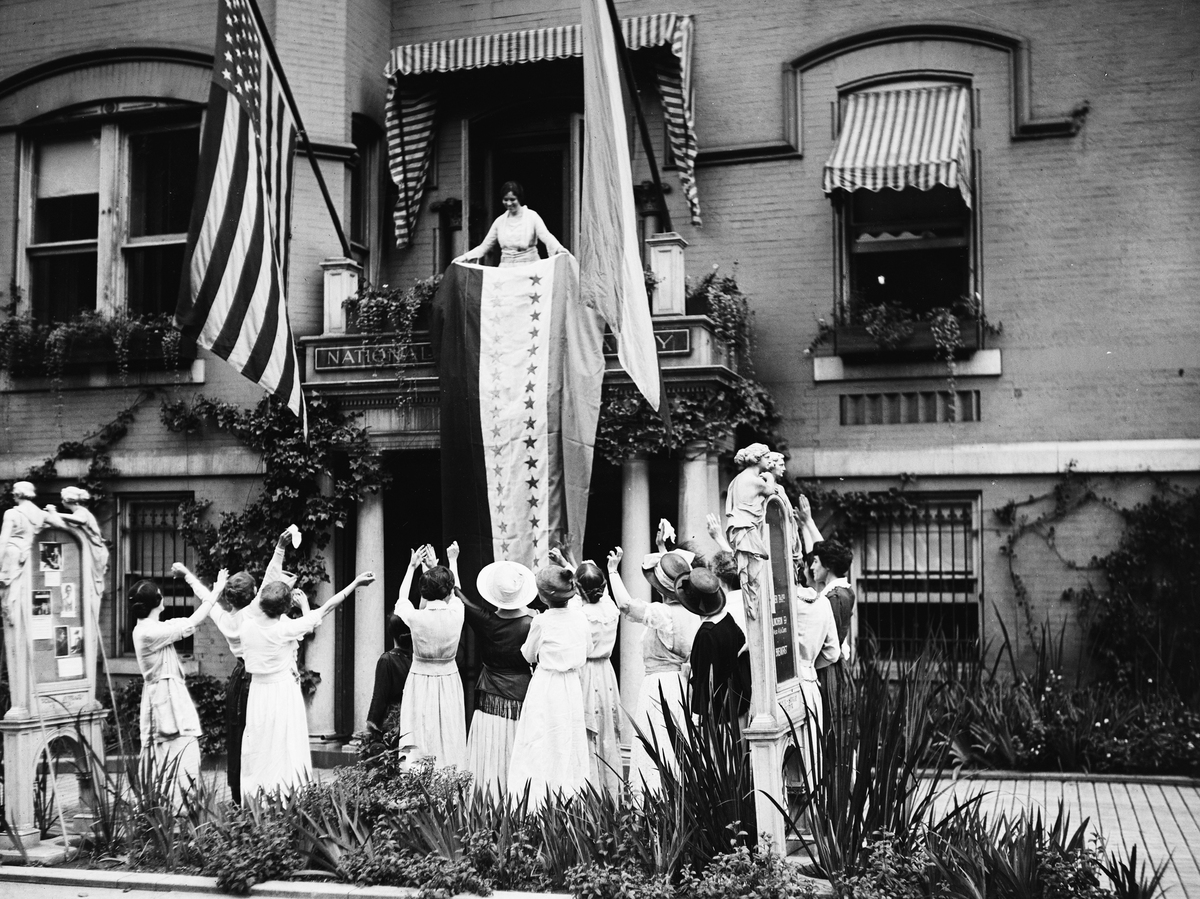 Alice Paul, a leader of the National Woman's Party, unfurls the ratification banner with its new 36th star after Tennessee ratified the 19th Amendment on Aug. 18, 1920. The amendment prohibits denying the right to vote based on sex.

The 19th Amendment to the U.S. Constitution was ratified 100 years ago this week, and it comprises just 39 words:

Congress shall have power to enforce this article by appropriate legislation.

But the fight to secure women that right to vote was decades long, and the final step toward ratification hinged on the decision of one young man in Tennessee: state Rep. Harry T. Burn.

Long after the Seneca Falls convention launched the women's suffrage movement in 1848; after suffragists had marched, picketed the White House, staged hunger strikes and endured force-feeding in prison; finally, in August of 1920, their dream was in sight.

After rejecting the amendment for decades, Congress passed it on June 4, 1919, and 35 states went on to ratify it. Suffragists needed just one more state for the 19th Amendment to be enshrined in the Constitution. 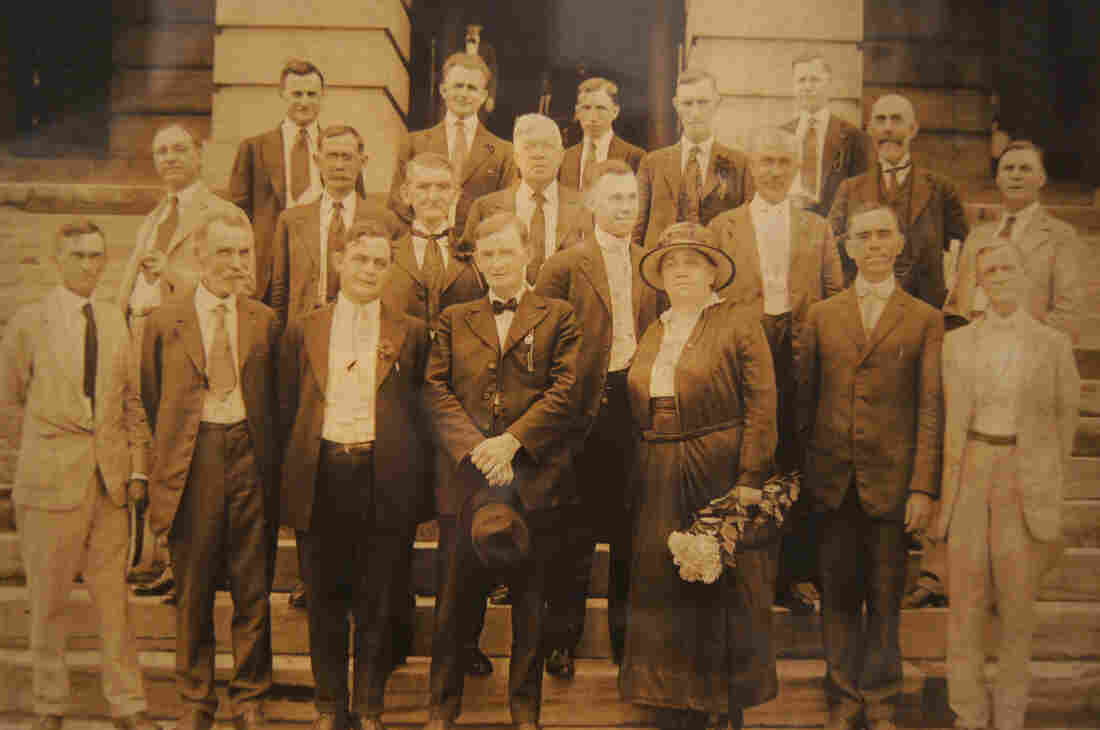 "Tennessee turns out to be their last best hope, the state that had any possibility of ratifying. And that terrifies them," says author Elaine Weiss, whose book The Woman's Hour: The Great Fight to Win the Vote recounts the dramatic suffrage battle in Tennessee.

Suffragists knew that other states weren't going to budge on ratification, explains Weiss. What's more, they knew opposition in the South was fierce. Opponents used racism and the fear of Black women's empowerment to stoke resistance.

"The racial arguments that are made are both ugly and abhorrent," Weiss says. "You have broadsides being distributed by the anti-suffrage forces saying, 'Do you realize that allowing the 19th Amendment to be ratified is going to bring back the horrors of Reconstruction? That there's going to be,' as they call it, 'Negro domination of our government?' Race is their main arguing point." 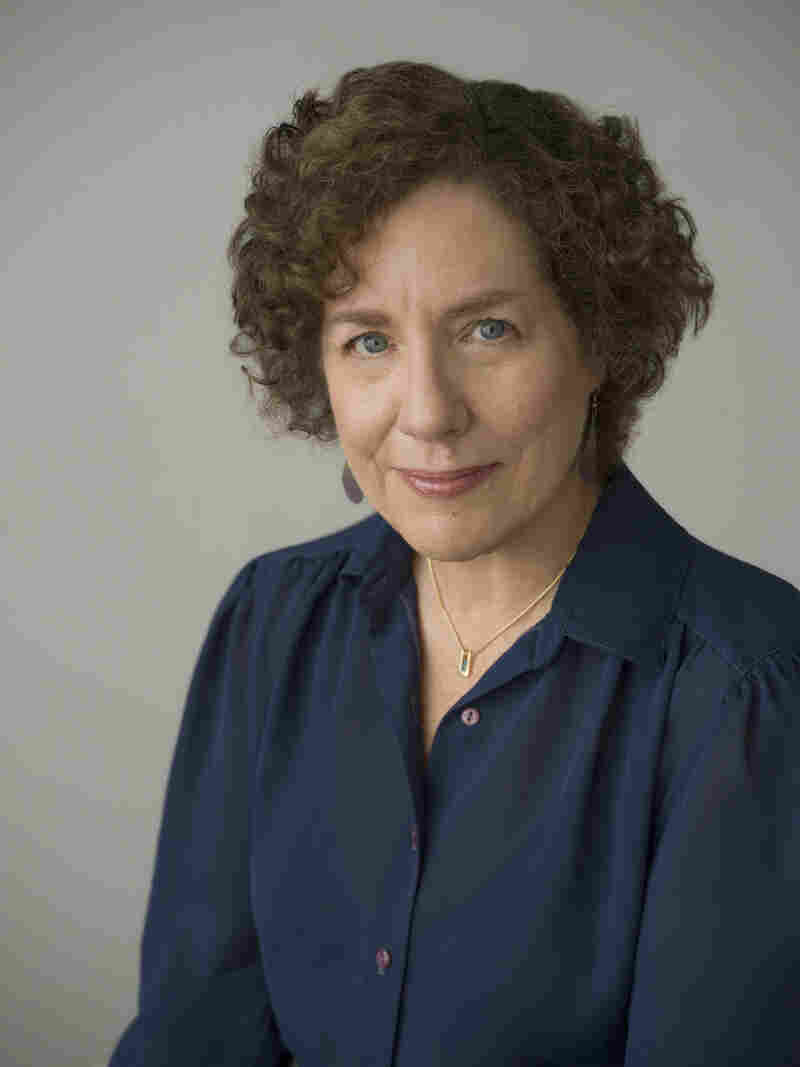 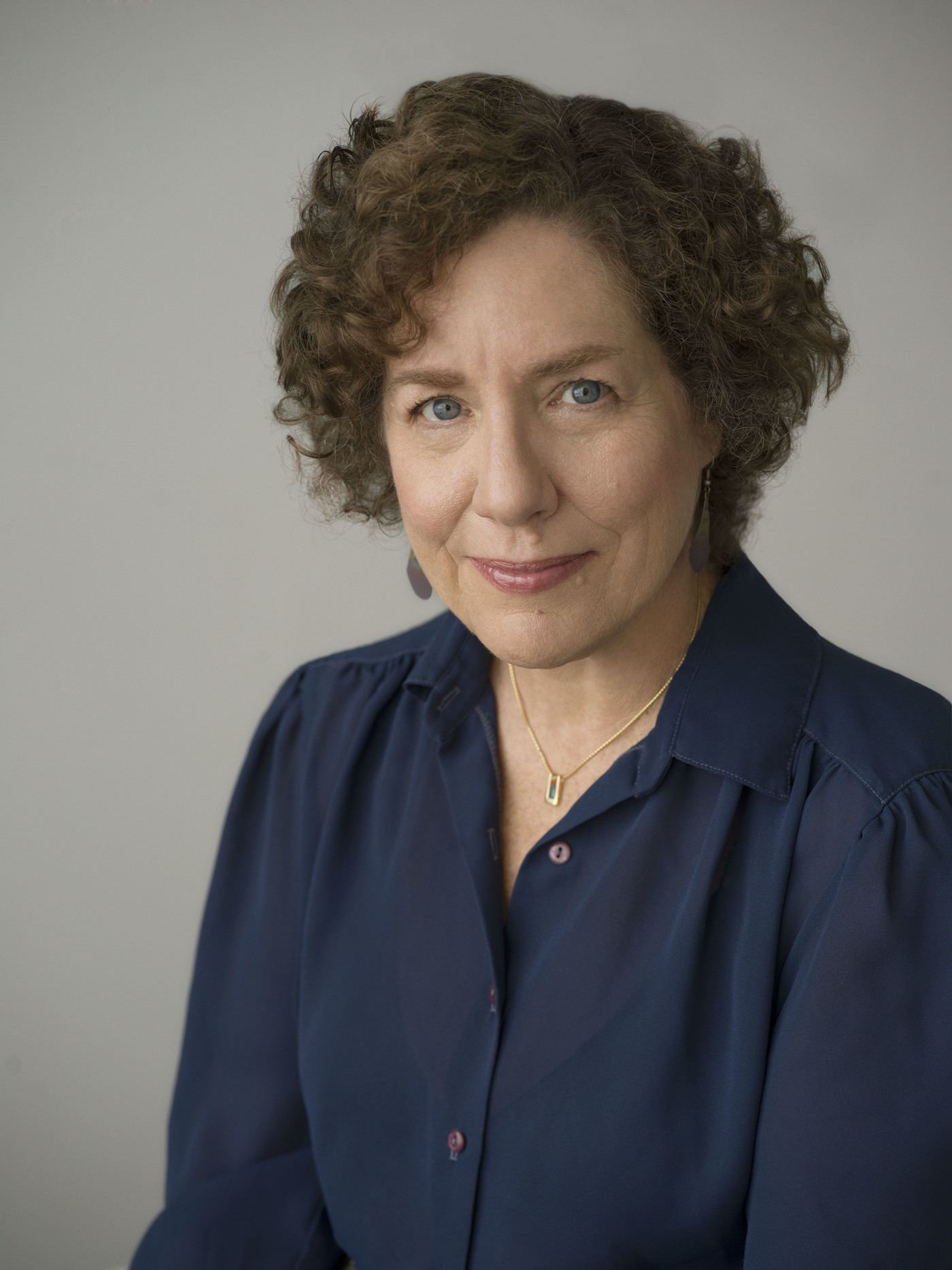 Author Elaine Weiss recounts the dramatic suffrage battle in Tennessee in her book The Woman's Hour: The Great Fight to Win the Vote.

Many business interests were opposed to the 19th Amendment too: Factory owners feared women voters would push for tougher labor laws. The liquor industry was angling to overcome the women's temperance movement and to end Prohibition.

So that hot summer, political operatives and lobbyists descended on the state's capital, Nashville, in droves, twisting arms, buying votes and carrying out dirty tricks.

Decades later, in an oral history given when she was 101, Tennessee suffragist Abby Crawford Milton recalled, "The bribery that went on in that legislature is beyond belief!"

Defying Prohibition, the liquor lobby set up what became known as the Jack Daniel's Suite in the Hermitage Hotel to lubricate legislators' votes against suffrage. 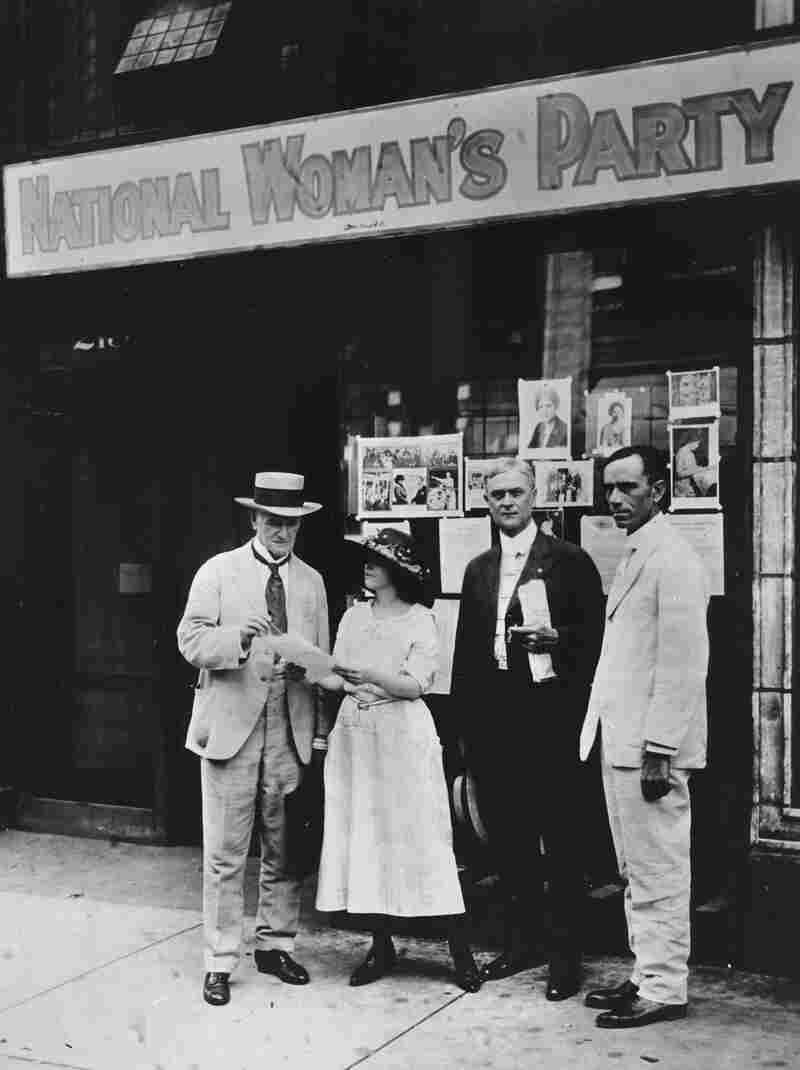 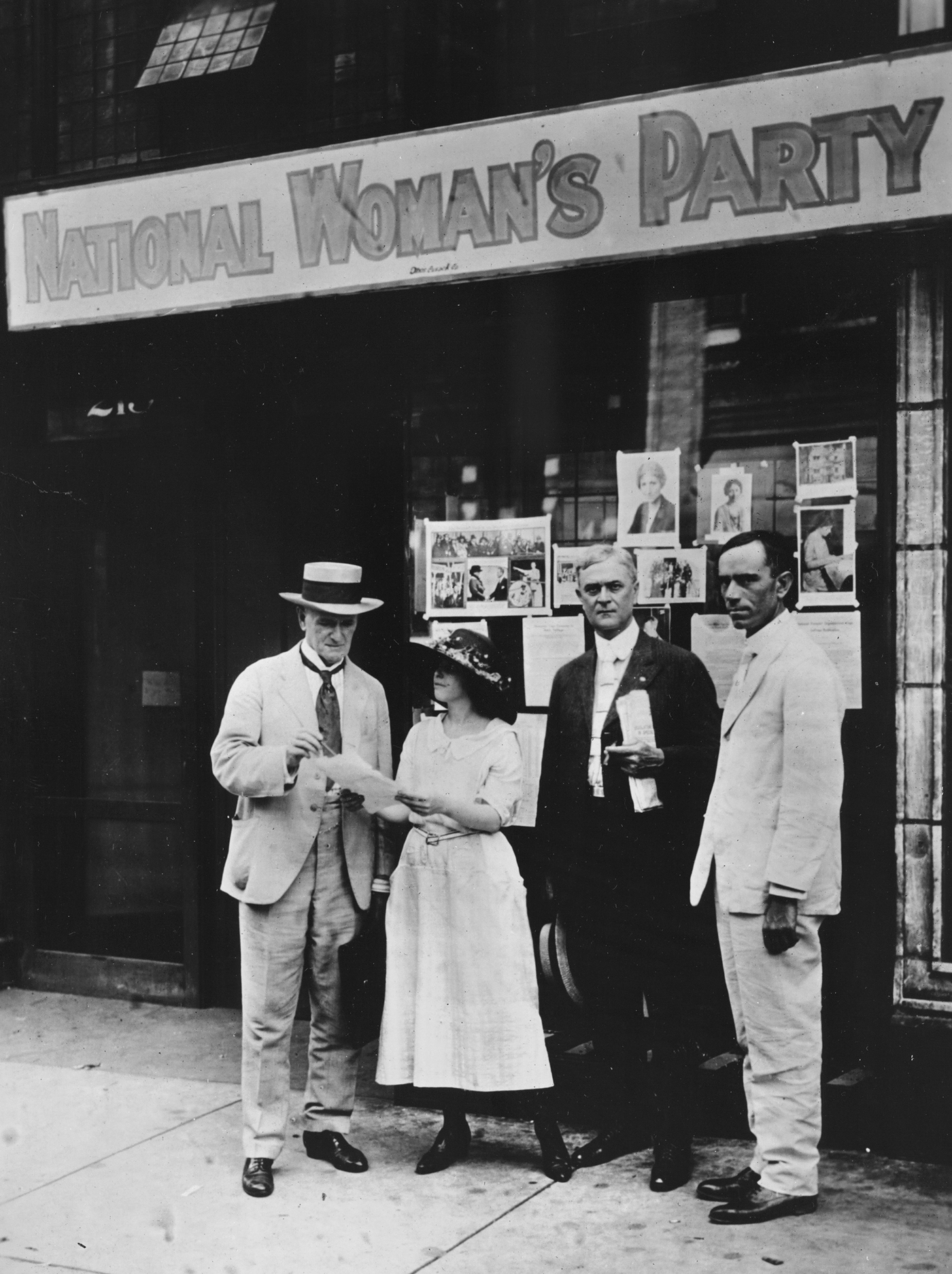 With all this going on, women were out in force, arguing both for and against suffrage.

They were buttonholing legislators, counting votes, even standing guard at Union Station, as Weiss writes, "so no cowardly, or coerced, delegate could leave town before the vote."

Their positions were made clear by the floral display on their lapels. When the women convinced a legislator to join their side, they would pin a rose to his jacket. Those for women's suffrage wore a yellow rose, while those against sported a red American Beauty. "It's often called the War of the Roses," Weiss says.

Calling it a war is not all that far-fetched.

"There are threats of kidnapping. There are fistfights," Weiss says. "There are even death threats, and the governor has to order state troopers to guard some of the suffrage leaders in the legislature. It gets very ugly, and you see that the stakes are quite high. This is the moment which can decide whether American women are going to be allowed into their nation's democracy." 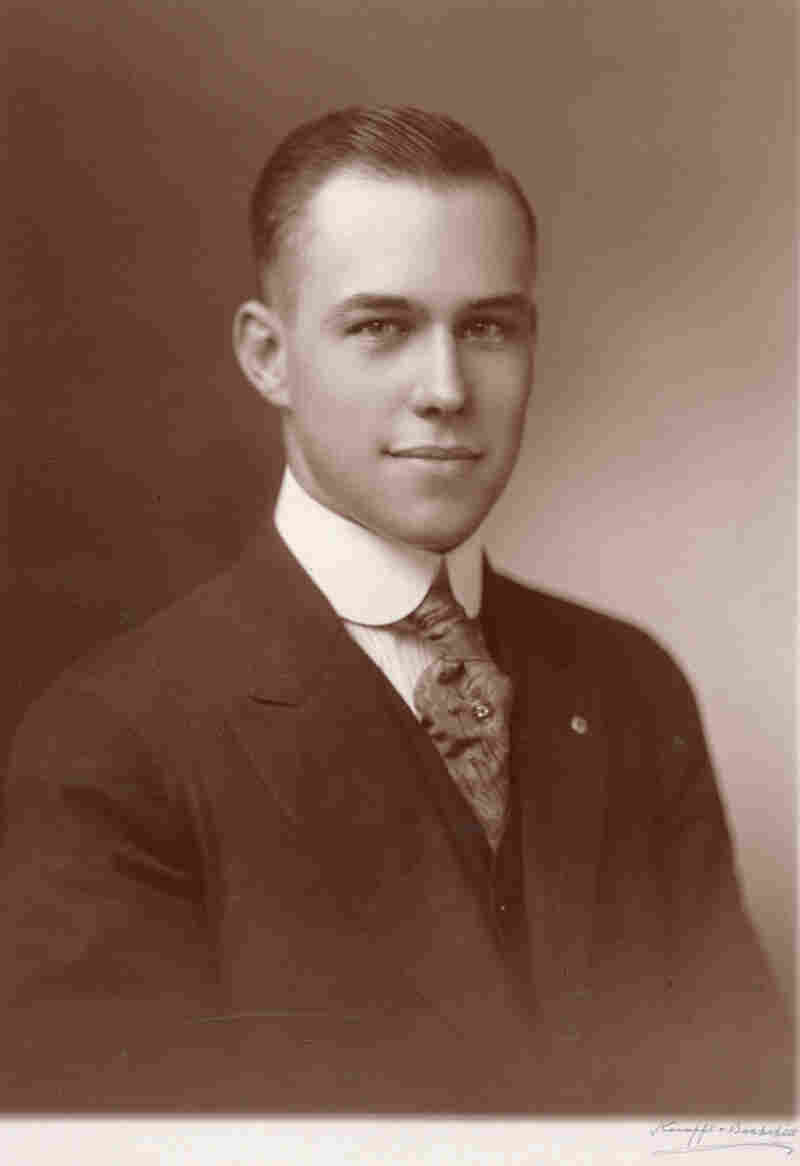 At age 24, Harry T. Burn was the youngest member of the Tennessee legislature in 1920. Burn Family hide caption 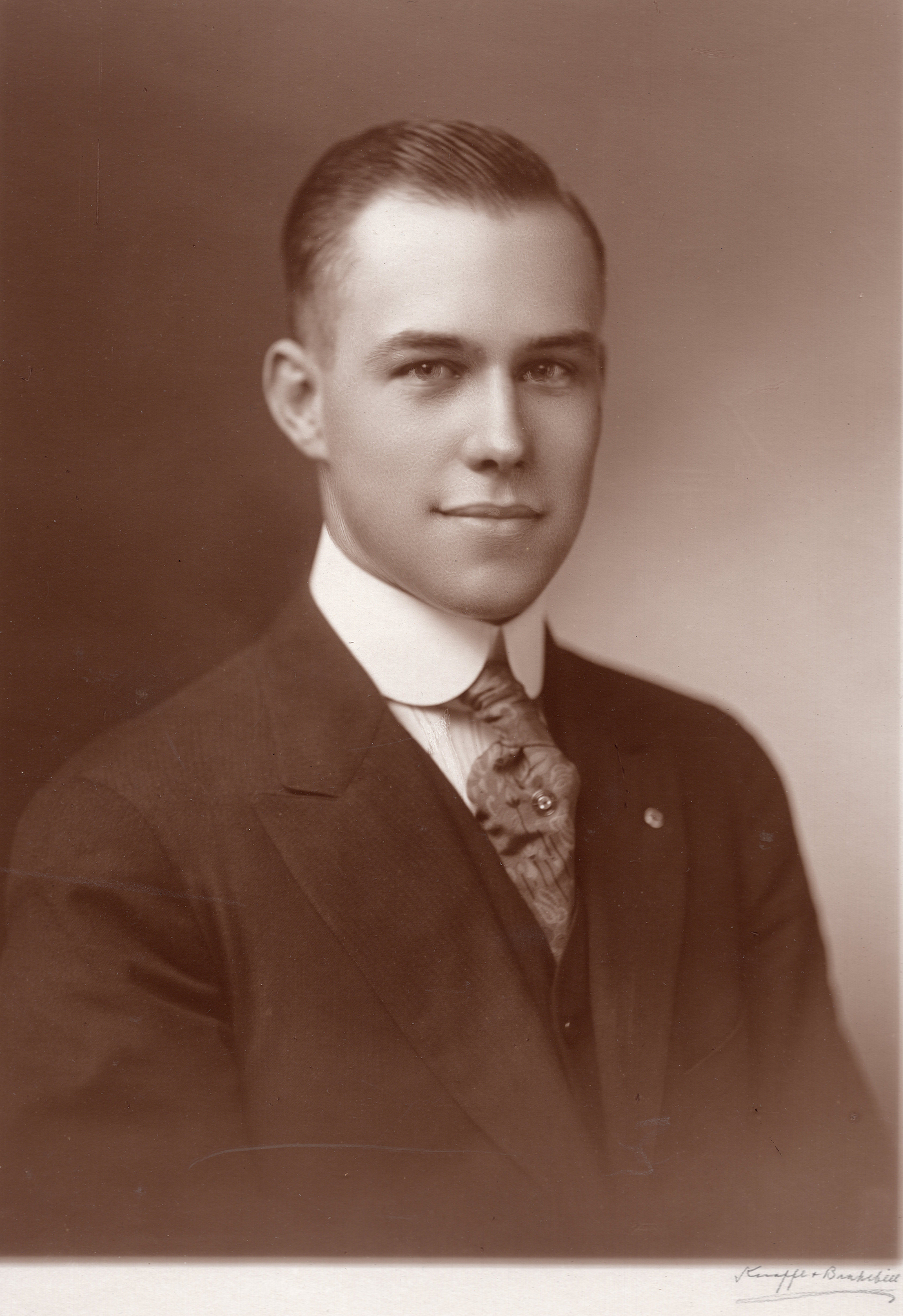 At age 24, Harry T. Burn was the youngest member of the Tennessee legislature in 1920.

Into this heated frenzy enters Harry T. Burn, who will become either the hero or the villain of this story to those at the time, depending on their allegiance.

Burn is a freshman delegate to the Tennessee House of Representatives, hailing from the tiny hill town of Niota in East Tennessee. The youngest member of the state legislature at age 24, he is nicknamed "Baby Burn."

On Aug. 18, 1920, Burn walks onto the House floor of the Tennessee State Capitol with a red rose pinned to his jacket lapel.

The anti-suffragists are sure he is on their side. Burn has been warned that his political career is in jeopardy if he votes against them. Indeed, twice that day, he votes with the antis to table the suffrage amendment — that is, to kill it by not voting on it.

But that attempt fails when those votes end in a tie, 48-48.

So now comes the moment of truth: the vote on whether to ratify the suffrage amendment itself — a roll call vote, yes or no.

"The pressure in Tennessee's House chamber that morning was intense, because every person sitting there knew it's us or it won't happen," says Carole Bucy, a history professor at Volunteer State Community College. 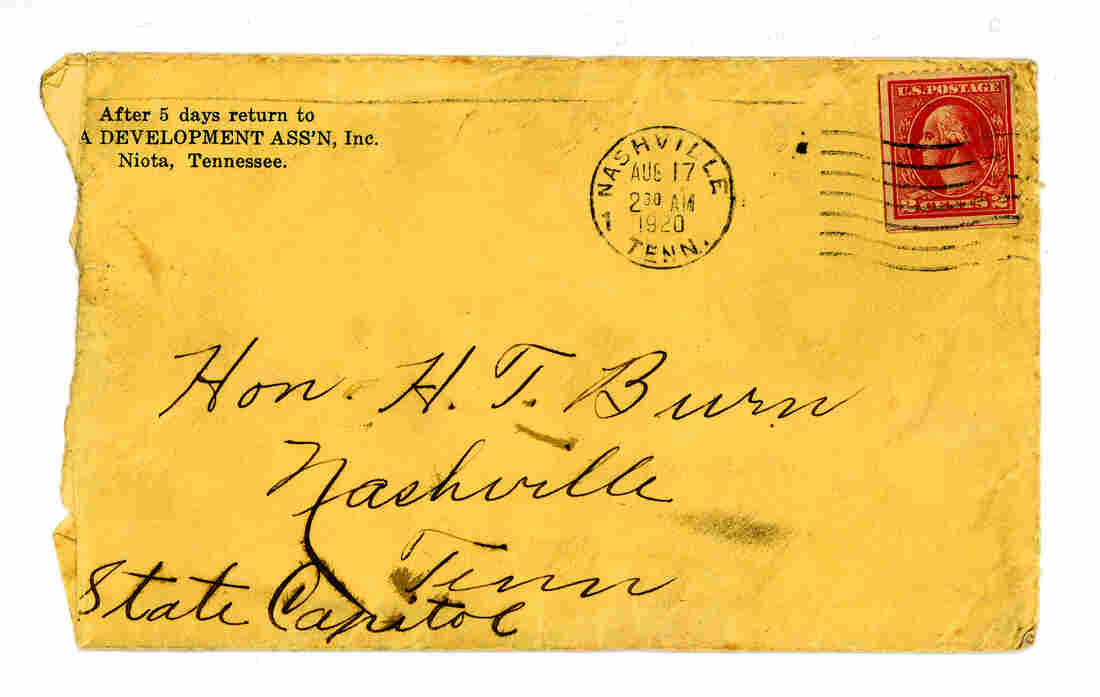 The envelope that contained the letter Febb Burn wrote to her son, Tennessee state Rep. Harry T. Burn, in which she urged him to vote for the 19th Amendment. McClung Historical Collection/Knox County Public Library System hide caption 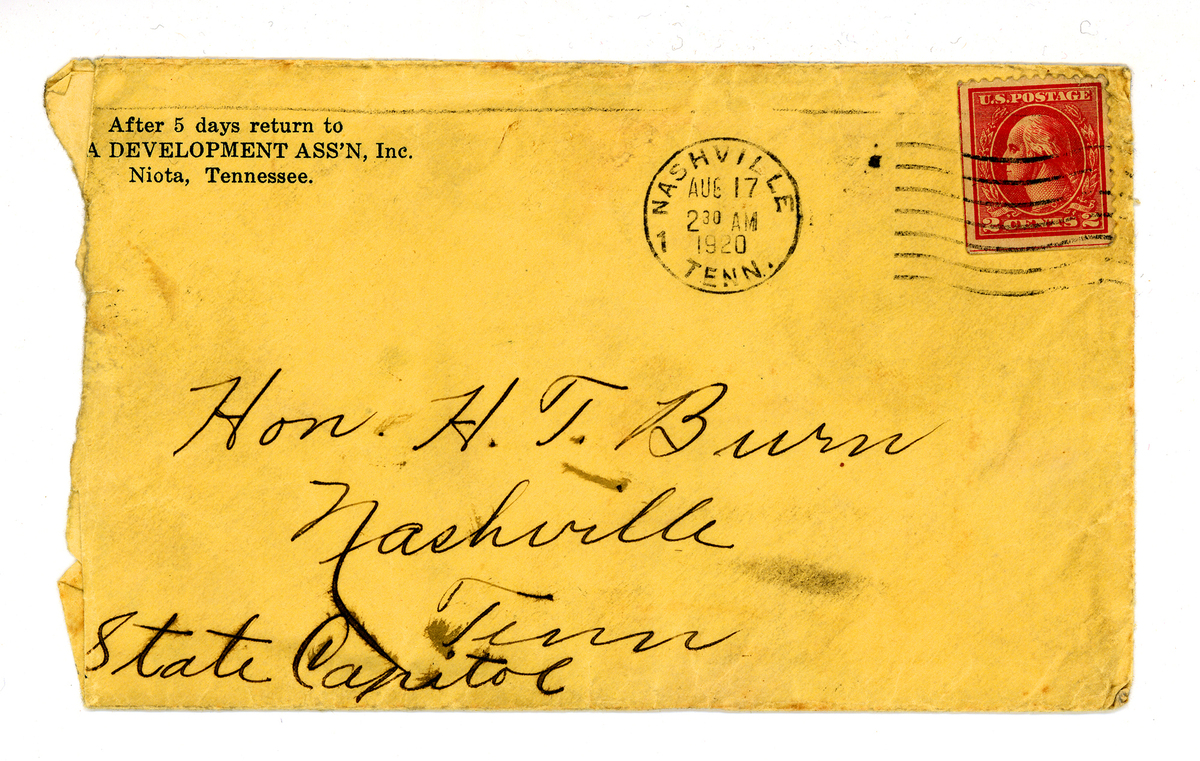 The envelope that contained the letter Febb Burn wrote to her son, Tennessee state Rep. Harry T. Burn, in which she urged him to vote for the 19th Amendment.

Women have packed the gallery to watch the action. The chamber is a sea of yellow and red roses.

"Harry Burn is called," Bucy says, "and he, in what was regarded to be a fairly quiet voice, said, 'Aye.' "

To everyone's shock, Burn has flipped. The tie is broken. Ratification has passed.

"Pandemonium is erupting," Bucy says. "The antis are furious. They thought they had this locked up!"

The impact is seismic, says Weiss: "The 19th Amendment is ratified. And then all hell breaks loose. You have the suffragists screaming and crying and throwing their yellow roses down onto the legislators, and the anti-suffragists are just stunned and horrified, and they're hissing and screaming at Harry Burn."

What they didn't know is that Harry Burn had a letter in his pocket that he had received shortly before the vote from his mother, Febb Burn, back in Niota. 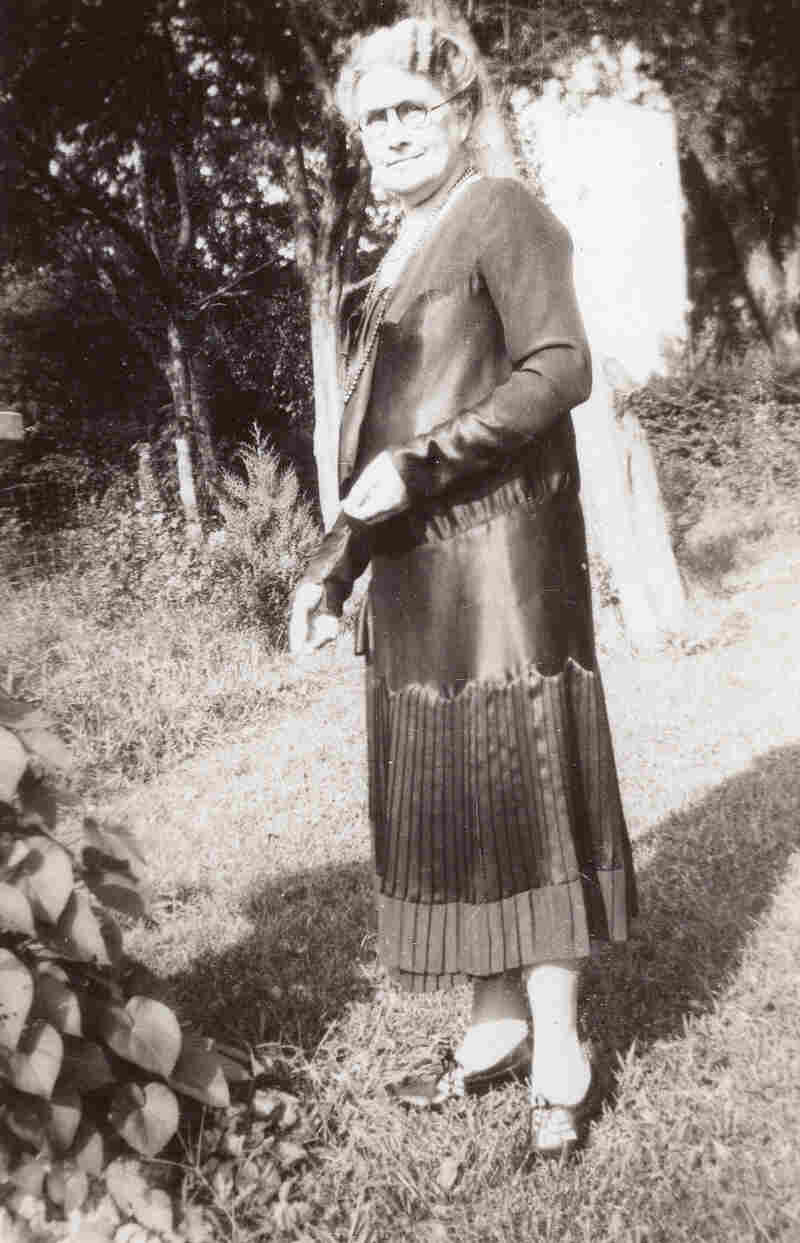 Harry Burn's mother, Febb Burn, was a widow and ran the family farm. She was college educated, a voracious newspaper reader and a strong supporter of women's suffrage. Burn Family hide caption 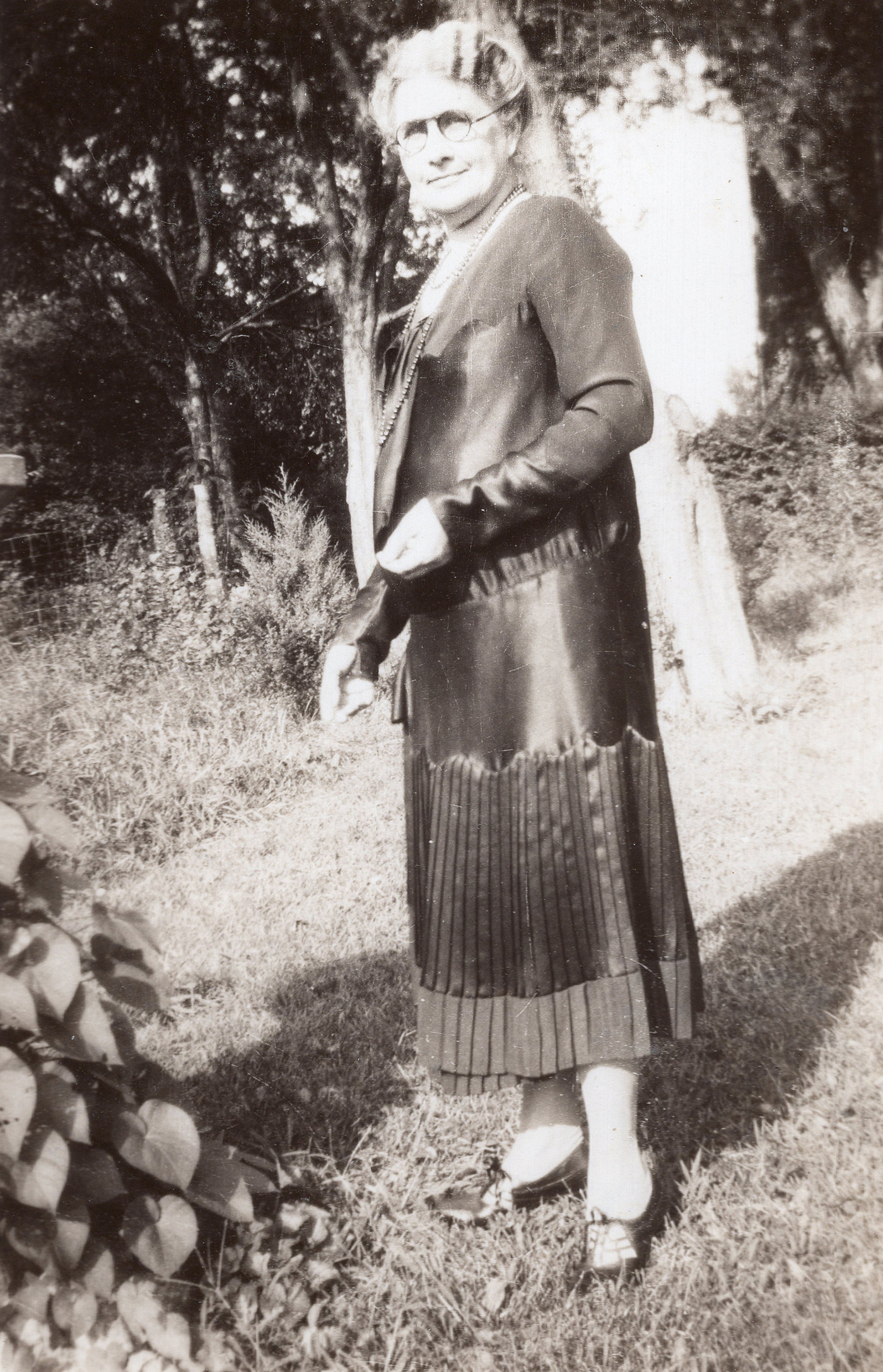 Harry Burn's mother, Febb Burn, was a widow and ran the family farm. She was college educated, a voracious newspaper reader and a strong supporter of women's suffrage.

Febb Burn was a widow, running the family farm. She was college educated, a voracious newspaper reader and a strong supporter of women's suffrage.

As Febb Burn's great-granddaughter, Sandra Burn Boyd, tells it, Febb was keeping close tabs on the suffrage debate, and she was worried.

She hadn't read anything in the papers about where Harry stood.

"Her son's in Nashville fixin' to be part of this huge vote that would make the decision about women," Boyd says, "and she finally decided maybe she needed to nudge him just a little bit."

So Febb took a pencil and wrote Harry a six-page letter on lined paper, "talking about weather and weddings and blah blah blah," as Boyd puts it, and then Febb got down to business.

"Hurrah and vote for suffrage," she directed her son, "and don't keep them in doubt."

The day after the vote, Burn told his fellow delegates, "I knew that a mother's advice is always safest for a boy to follow, and my mother wanted me to vote for ratification."

Years later, in a family oral history, he stood by his decision. "I think it was morally right," he said. "I thought it then; I still think it."

After his historic vote, newspapers had a field day churning out Harry Burn limericks, like this one that ran in The Knoxville Sentinel:

There is a young man from Niota

who for precedent cares no iota

he sprung a surprise

when he flopped to the 'ayes',

and enraptured the feminine voter!

That November, Burn was vindicated, narrowly winning reelection to the Tennessee House.

For Burn family descendants, their place in history is inspiring.

"[Harry Burn] made an incredible impact on this entire country," says Sandra Boyd's son Tyler, a schoolteacher, who has written a biography of his great-granduncle titled Tennessee Statesman Harry T. Burn: Woman Suffrage, Free Elections and a Life of Service.

"Niota and McMinn County and East Tennessee are all very, very proud of him," Tyler says.

"Absolutely," agrees his mother. "Very, very proud of that fact."

"His Registration No. is 1," reads her voter registration card. "He is entitled to vote ... in the 4th Precinct, 1st District of McMinn County."

"All the pronouns are male," says Tyler Boyd. "They didn't even have time to change it, 'cause we're in a new world now. She finally cast a ballot for the first time in her life, November 1920, at age 47."

Not far from Niota, in the heart of downtown Knoxville, Febb and Harry Burn are immortalized in a bronze statue commissioned by the Knoxville Suffrage Coalition. Harry is seated with Febb standing behind him, one hand on his shoulder. "A giant step toward a more perfect union," reads the inscription at the memorial's base. 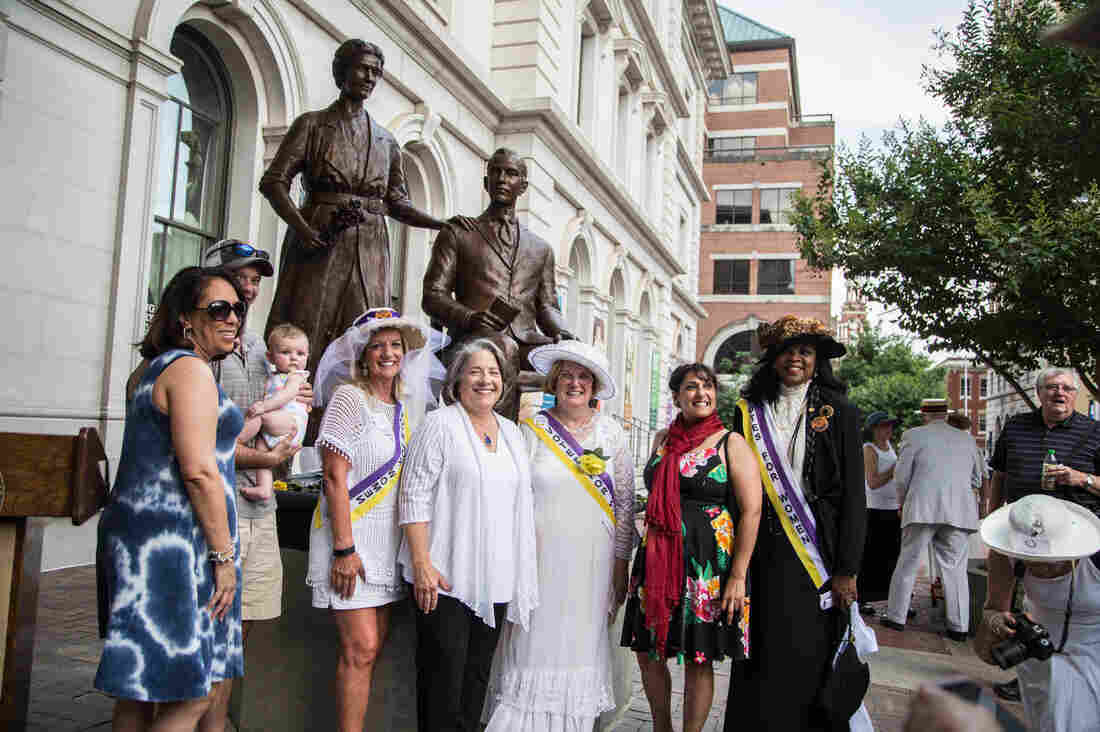 Suffrage Coalition President Wanda Sobieski (third from right, in suffrage regalia) and other coalition members pose with the statue of Febb and Harry Burn at the unveiling of the Burn Memorial in Knoxville, Tenn., in June 2018. Alan Sims hide caption 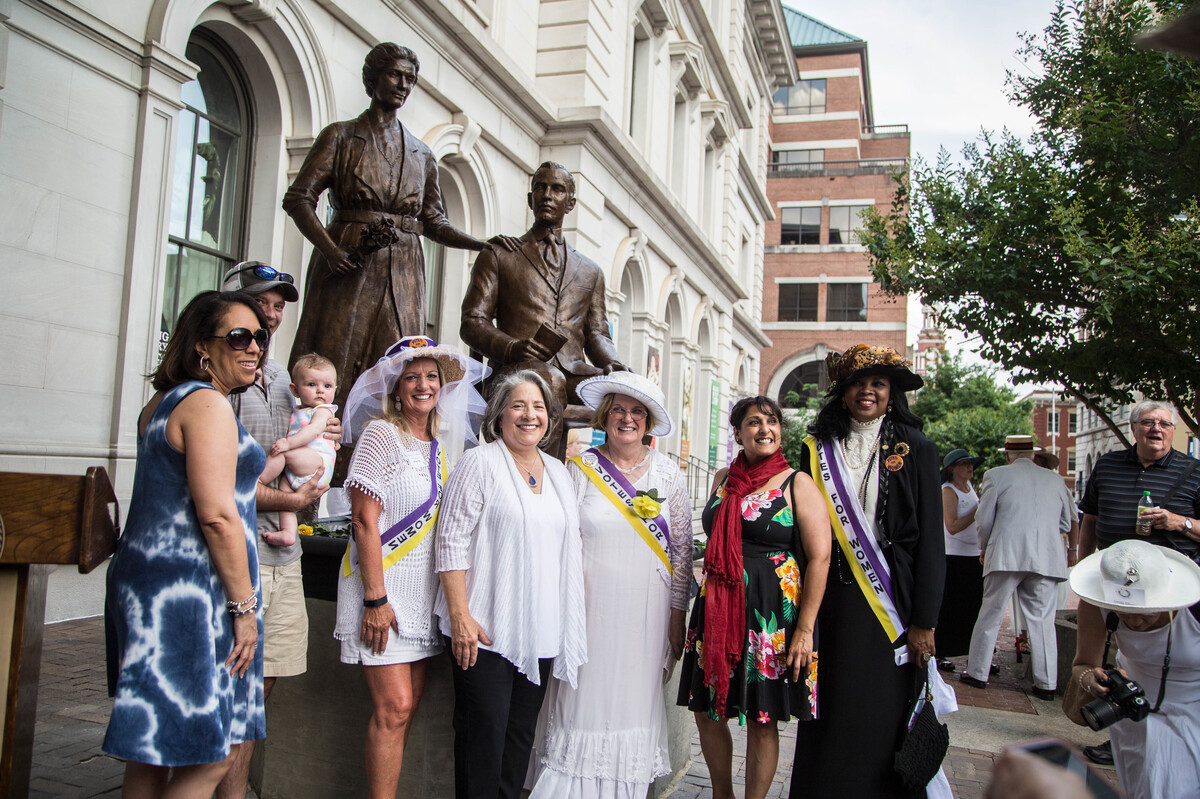 Suffrage Coalition President Wanda Sobieski (third from right, in suffrage regalia) and other coalition members pose with the statue of Febb and Harry Burn at the unveiling of the Burn Memorial in Knoxville, Tenn., in June 2018.

The centennial of women's suffrage, Sobieski says, is a reminder to value our voting rights.

"If people really — especially women — really understood how hard it was for these women to go through 72 years of struggle, of ridicule, having to basically beg for the vote from the men who controlled the legislatures," she says, "then maybe they'd be more thankful for what they have and more likely to go out and vote."

The Suffrage Coalition had planned a big suffrage centennial parade in Knoxville, but it has pushed that back until next year because of the coronavirus pandemic. The group is calling it "Centennial Plus."

"You know, the suffragists waited 72 years to get the vote," Sobieski says with a chuckle. "I guess we can wait one more year to celebrate the centennial!"