Accessibility links
Demands For Democratic Reform Surge In Thailand Sunday saw the largest anti-government demonstration in Bangkok since a military coup six years ago. Some demonstrators called for reform of the monarchy, the country's most revered institution. 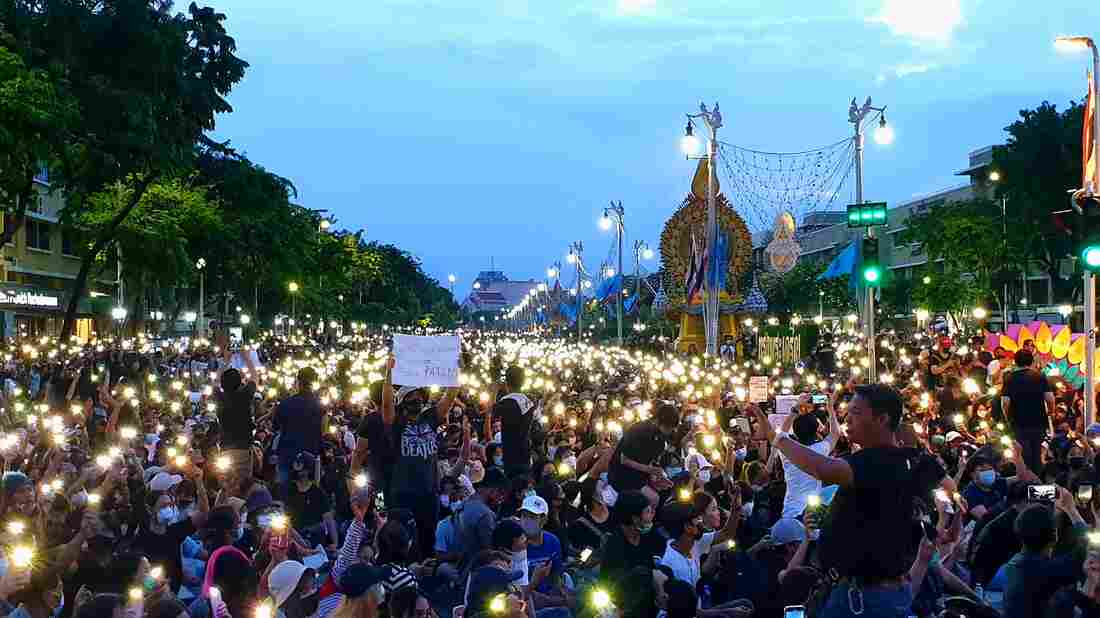 Lighted cellphones held up by demonstrators call for an end to the military-backed government on Sunday in Bangkok. Michael Sullivan/NPR hide caption 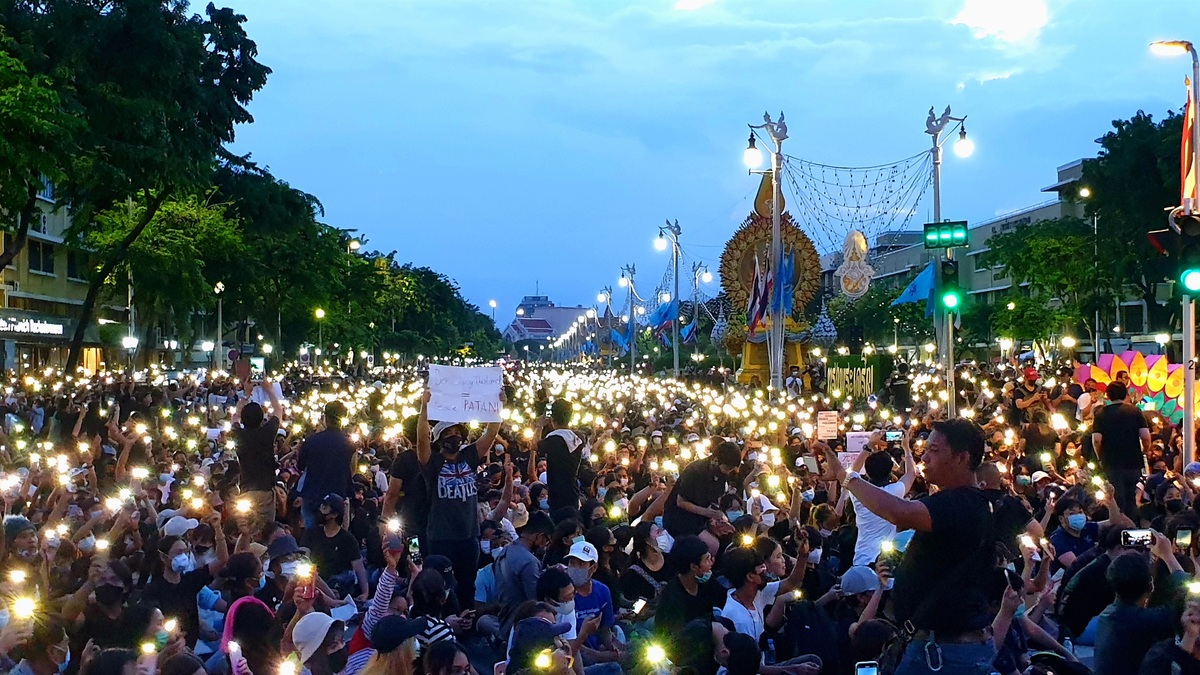 Lighted cellphones held up by demonstrators call for an end to the military-backed government on Sunday in Bangkok.

Thousands of Thais gathered Sunday in the capital, Bangkok, for the largest anti-government demonstration since the 2014 coup that brought the military to power.

Protesters, many dressed in black, thronged the streets around the Democracy Monument at Ratchadamnoen Avenue and Dinso Road.

Many chanted, "Down with dictatorship," and, "The country belongs to the people," as they displayed the three-fingered gesture of defiance popularized by The Hunger Games movies.

Speaker after speaker reiterated the Free People movement's core demands: that Prayuth Chan-ocha, coup leader-turned-prime minister, and his government step down, that a new constitution be written and that Thailand end harassment of government critics.

Some also called for curbs on the political influence of Thailand's powerful monarchy.

The monarchy has long been the country's most revered institution, and any criticism of it carries serious consequences. Thailand's lèse-majesté law calls for prison terms of up to 15 years for defaming or insulting the royal family. A few weeks ago, however, protesters began calling for reforms to make it more like constitutional monarchies in other countries. 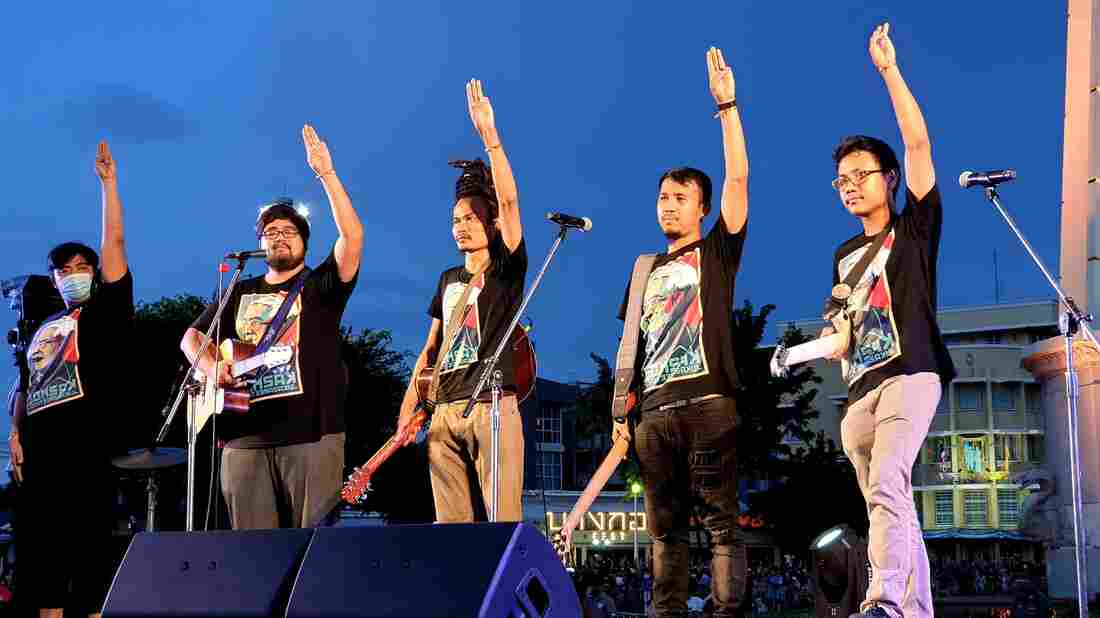 Members of a musical group at Sunday's pro-democracy demonstration in Bangkok make a gesture of resistance popularized by The Hunger Games movies. Michael Sullivan/NPR hide caption 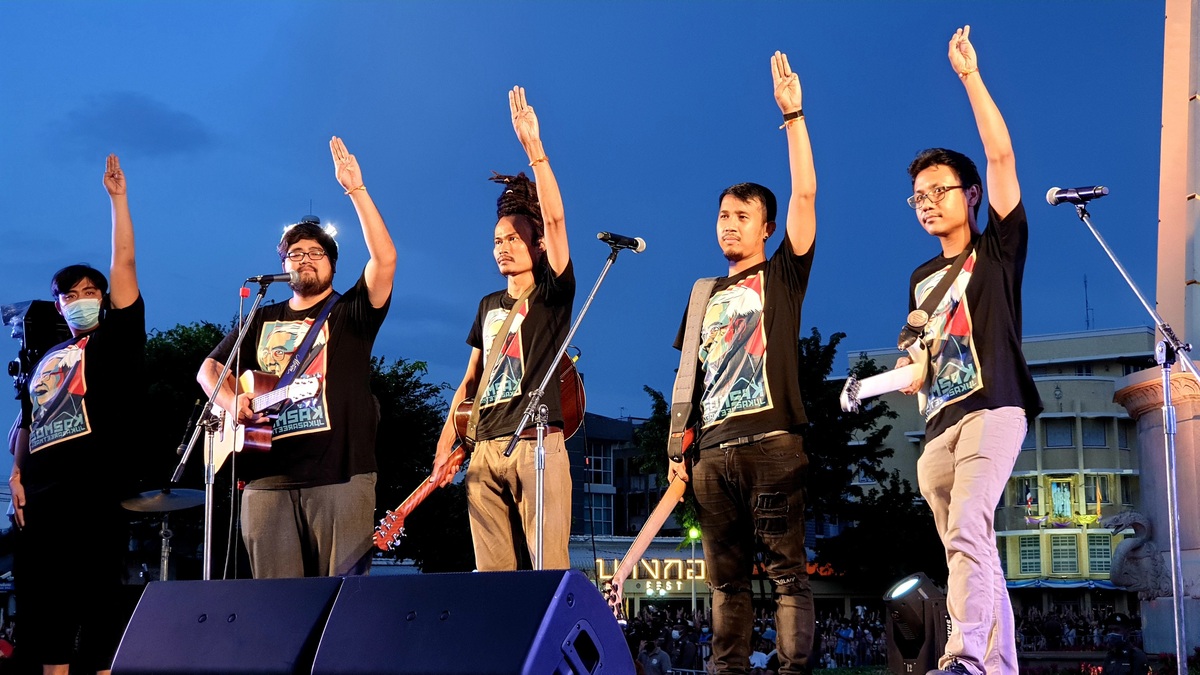 Members of a musical group at Sunday's pro-democracy demonstration in Bangkok make a gesture of resistance popularized by The Hunger Games movies.

Thailand's current king, Maha Vajiralongkorn, ascended to the throne following the death of his much loved and admired father, King Bhumibol Adulyadej, who ruled for seven decades. Vajiralongkorn spends almost all his time abroad, primarily in Germany.

Last week, at another student rally at Thammasat University on the outskirts of Bangkok, more than 3,000 people turned out to hear student leaders outline a 10-point manifesto for reforming the monarchy. Much of the mainstream Thai media ignored or gave short shrift to this dramatic turn of events, fearful of angering the palace.

Some Thais worried that Sunday's huge gathering in Bangkok might end in a confrontation between students and ultra-royalists furious with the students' demands. But the six-hour-plus event was a peaceful and often joyous affair. Both the organizers and the police put the number in attendance at more than 10,000.

There was a small counterprotest by a few dozen arch-monarchists. Dressed in yellow — a color associated with the monarchy — some waved huge Thai flags, while others held up photos of the king for the television cameras.

The pro-monarchy group had threatened to stay the entire rally to ensure that the monarchy was not maligned. But most, if not all, dispersed quietly before sunset as the main rally got into full swing with student leaders and others taking turns at the microphone.

"We want a new election and a new parliament from the people," student activist Patsalawalee Tanakitwiboonpon told the gathering, and a "monarchy which is truly under the constitution."

The prime minister, Prayuth, took office after elections most independent observers agree were rigged in favor of the military-backed parties. A newly formed opposition party popular with young people that finished third in the elections was dissolved this year by the constitutional court in a move widely seen as politically motivated. Several leaders of the latest wave of student-led protests have been arrested, then released. Police said there are warrants for more than a dozen others.

The student-led protests have been growing in recent months despite a state of emergency that remains in effect because of the COVID-19 pandemic. But Sunday's demonstration drew a more diverse crowd. Thailand has been largely spared by the virus, with fewer than 4,000 confirmed cases and 58 deaths. But the economic fallout from a ban on international tourists and a two-month-long lockdown have left many Thais out of work and angry with the military-backed government.

The students, some analysts said, have seen enough.

At the end of Sunday's rally, student leaders urged the government to act on their demands within a month or face more rallies. Their enthusiasm caught the imagination of some of the older, more jaded Thais at the rally.

"Even though I'm just, like, a tiny voice, if a lot of us get together I hope we can make a change," said 32-year-old social worker Won, who declined to give her last name. "But I cannot get my hopes too high," she added quickly. "I have had my heart broken many, many times. But I still want to believe. That's why I'm here."