Accessibility links
Is Afghanistan Waiting For The U.S. Election Before Starting Peace Talks? Some analysts think Kabul is holding out for a possible Joe Biden presidency before trying to strike any substantive deals with the Taliban. 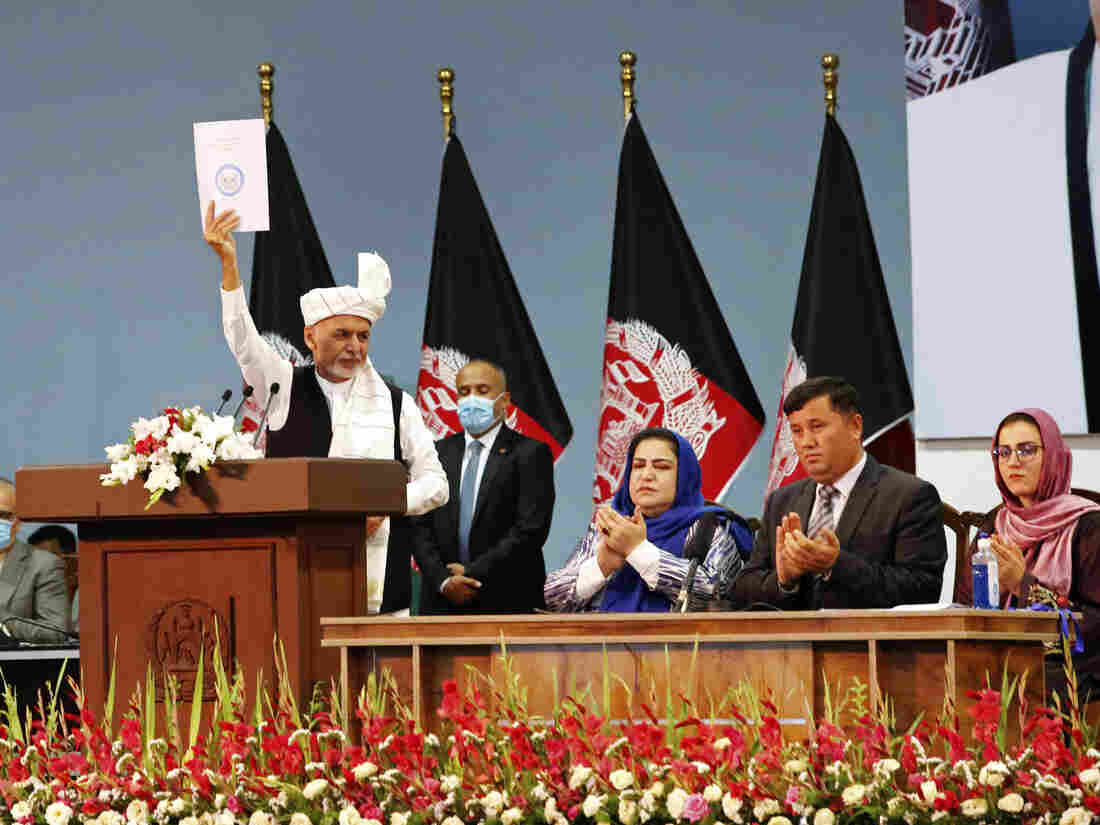 Afghan President Ashraf Ghani holds up a resolution on the last day of a traditional council known as a Loya Jirga, in Kabul, Afghanistan, Aug. 9. The council concluded with hundreds of delegates agreeing to free 400 Taliban members, paving the way for an early start to negotiations between Afghanistan's warring sides. AP hide caption 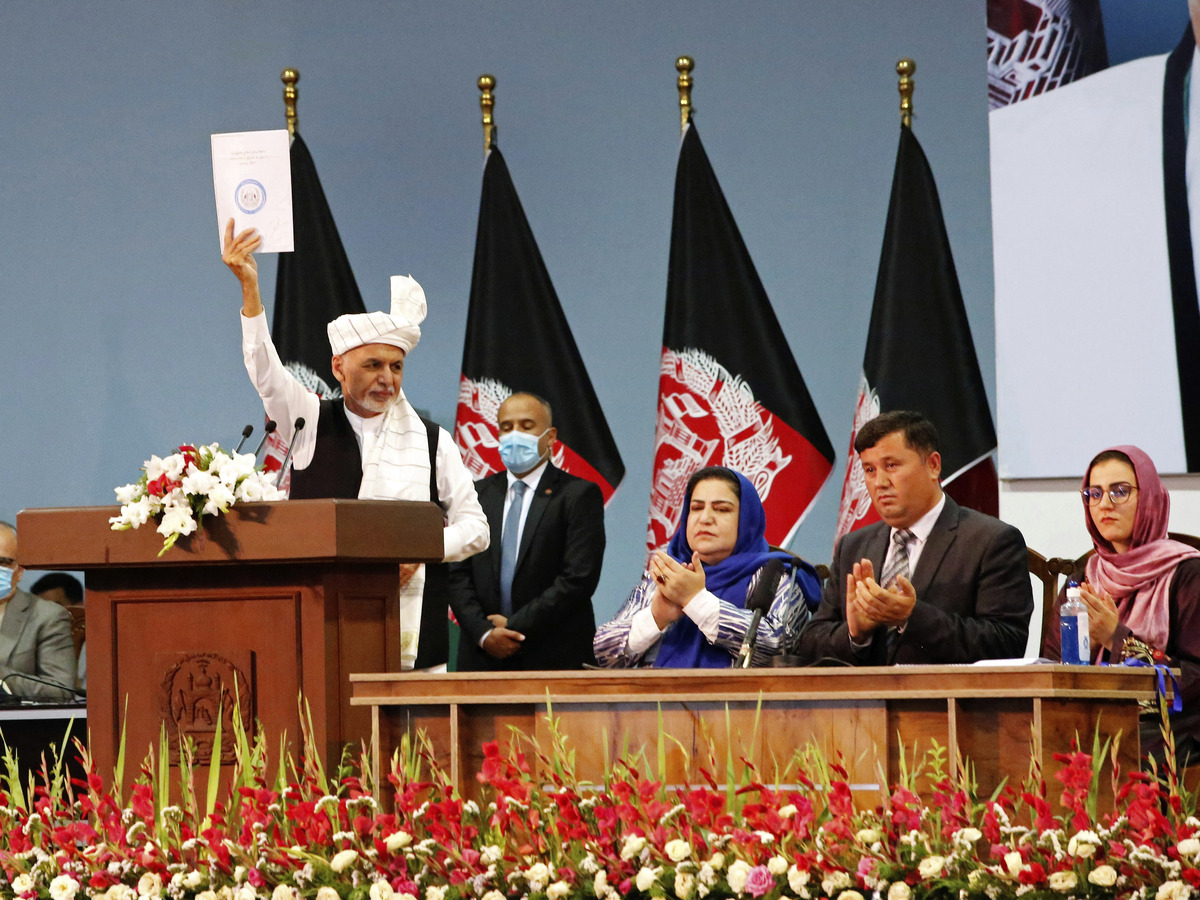 Afghan President Ashraf Ghani holds up a resolution on the last day of a traditional council known as a Loya Jirga, in Kabul, Afghanistan, Aug. 9. The council concluded with hundreds of delegates agreeing to free 400 Taliban members, paving the way for an early start to negotiations between Afghanistan's warring sides.

To pave the way for historic peace talks, the Afghan government is freeing thousands of Taliban detainees in phases, including men accused of one the deadliest attack in nearly two decades of insurgency: a 2017 truck bombing in Kabul that killed more than 150 people.

"We would like to end this violence," says Sediq Sediqqi, spokesman for Afghan President Ashraf Ghani. "We would like to make sure that the Taliban understands and realizes the opportunity of peace."

But despite the prisoner release, analysts say the Afghan government has been delaying talks to wait for the U.S. election results. "The Kabul government does seem to be holding out for a Biden presidency," says Kate Clark, co-director of the Kabul-based Afghanistan Analysts Network.

In doing so, the Afghan government risks peace talks collapsing, and could be blamed by its main backer, the United States. The government may also anger Afghans who see the release of Taliban prisoners as a hefty sacrifice.

"This is a unique opportunity in which we might get to some level of a peaceful and stable Afghanistan," says Orzala Nemat, director of the Afghanistan Research and Evaluation Unit, a Kabul-based think tank. "We should not miss that opportunity."

This is a unique opportunity in which we might get to some level of a peaceful and stable Afghanistan.

Orzala Nemat, director of the Afghanistan Research and Evaluation Unit

The talks aim to end more than four decades of near continuous conflict in Afghanistan, including 19 years of insurgency, by negotiating a power-sharing agreement with the Taliban. But mistrust in the intentions of the Taliban and the Trump administration intentions runs deep among Afghan officials and the Afghan public, analysts say.

To understand why, travel back to a ballroom of an upscale hotel of marble and gold in Qatar. There, on Feb. 29, Taliban supporters shouted "God is Great!" as their senior negotiator, Mullah Abdul Ghani Baradar, signed a historic agreement with U.S. envoy Zalmay Khalilzad. That deal called for most foreign forces to withdraw from Afghanistan by next April. The Taliban promised not to attack U.S. and NATO troops, or shelter militants like al-Qaida.

"The peace process is driven by Washington," says Clark. "And it's driven, I would say, by the desire to get troops out of Afghanistan." She says that immediately concerned Afghan officials who worried it signaled a broader abandonment of the country.

The deal also called for the release of up to 5,000 Taliban prisoners in exchange for 1,000 Afghan security forces held by the insurgents — as a confidence-building measure to precede negotiations between delegations. 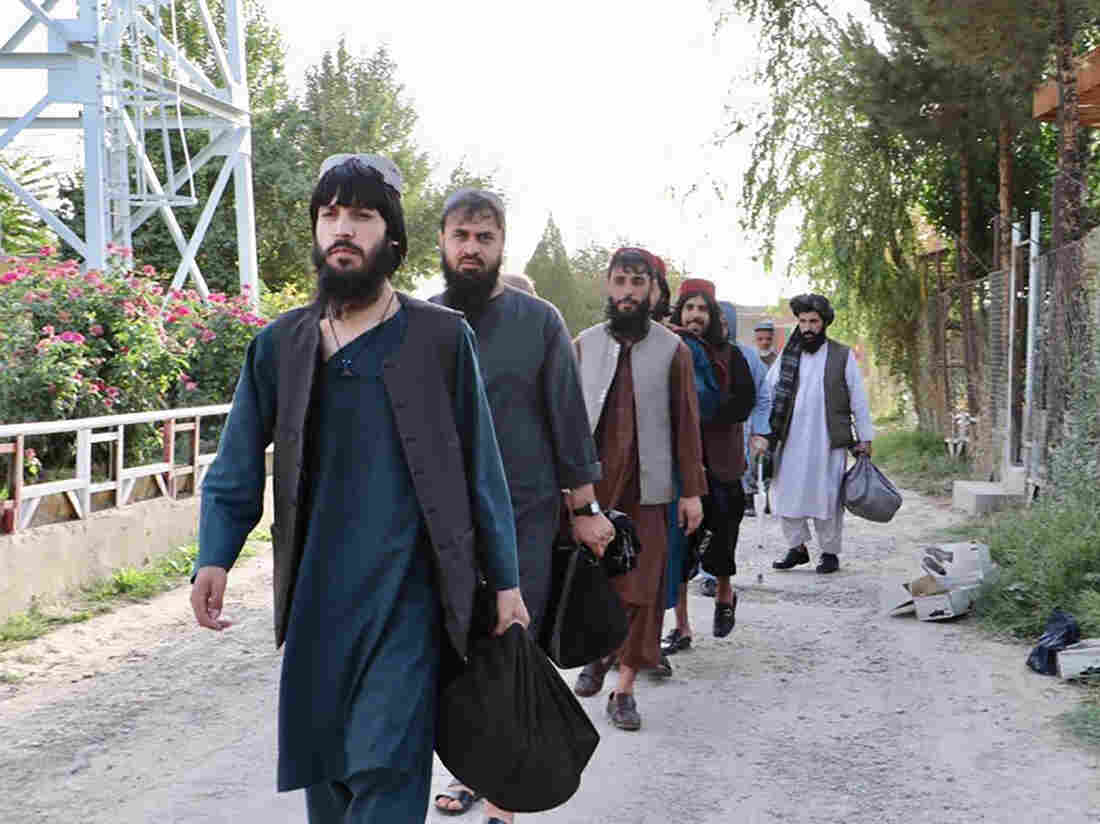 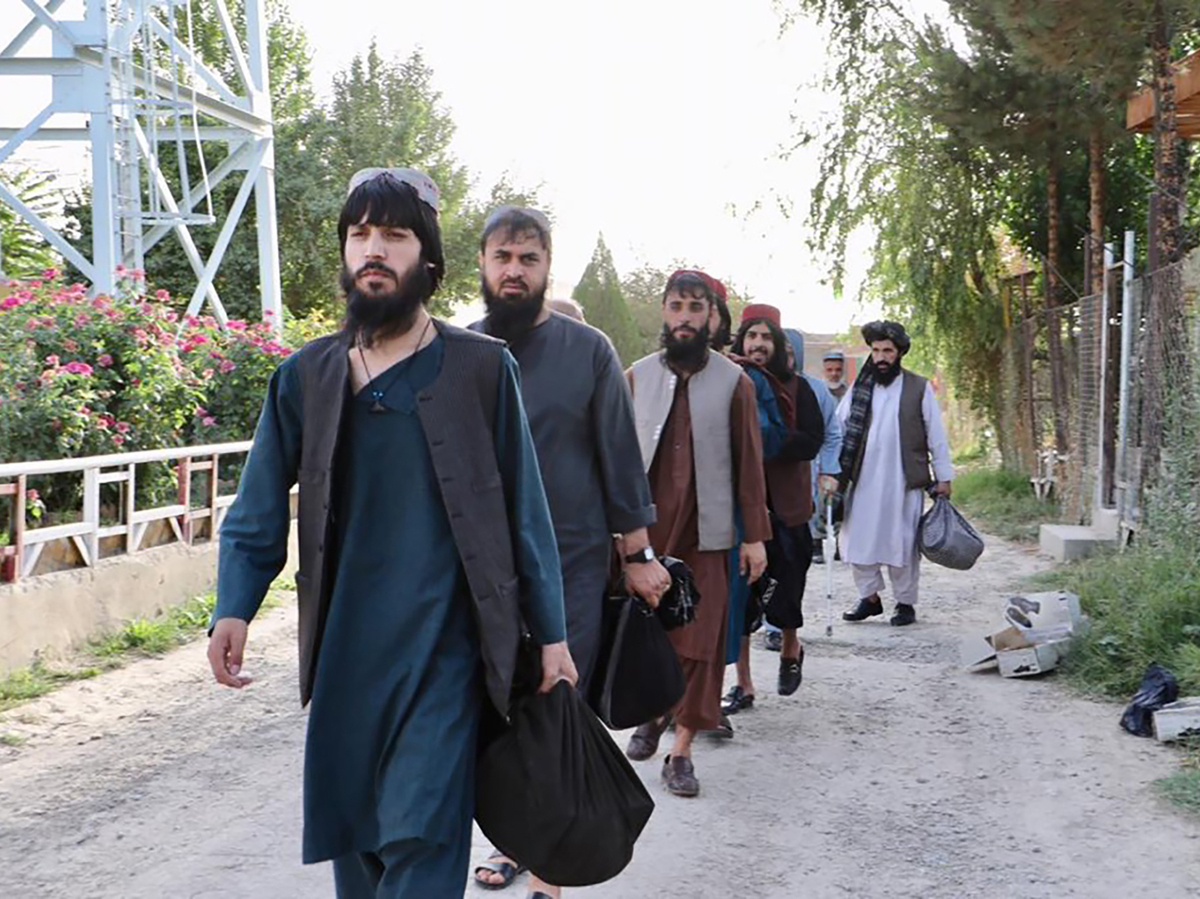 The Afghan government was not party to the deal, but promised to uphold those uneven terms after pressure by the U.S, according to Andrew Watkins, senior Afghanistan analyst at the International Crisis Group. The authorities in Kabul "don't really have much of a choice other than to do what a lot of their supporters would view as open capitulation to the Taliban," he says.

The prisoner swap and subsequent talks were supposed to begin within 10 days of the deal. Five and a half months later, the government is still releasing some of the last batch of 400 insurgents.

"The Afghan government, has not displayed a sense of urgency in starting the talks and certainly not urgency to the degree that the Americans have hoped for," Watkins says.

In fact, while the U.S. and the Taliban were signing their agreement in Qatar, the Afghan president was feuding with his rival and former deputy, Abdullah Abdullah, over the outcome of controversial September elections. Their dispute only began being resolved in late March after Secretary of State Mike Pompeo warned he would cut $1 billion in aid.

Analysts say the Afghan government does not trust the Taliban's intentions — after all, the militants are still attacking Afghan forces.

"Are they intent on reaching a political agreement through negotiations, or [are] the discussions primarily a means of getting the U.S. military off the battlefield, getting large numbers of prisoners out before a military push on Kabul?" Clark says.

Nemat, director of the Afghanistan Research and Evaluation Unit, believes that trusting the Taliban is a steep task for most Afghans. "The only thing I see changing is their behavior in their conversations a little bit with the foreigners," she says.

There is no Plan B for Afghanistan.

Above all, Clark and Watkins say, the government doubts the Trump administration will support it through the negotiation process. Kabul officials would feel under pressure to reach substantive agreements by the time foreign forces withdraw in April 2021, the analysts say. The authorities worry they'll have little leverage to preserve the gains the country has made in the past two decades, like their constitution and advances in women's rights.

Two people close to the government negotiators echoed the substance of what the analysts said. They spoke to NPR on condition of anonymity because they didn't want to anger Afghan or U.S. officials.

The Afghan president underlined his concerns in an op-ed in The Washington Post on Friday. "The international community will play an important role as facilitators and mediators of the talks, ensuring that momentum, and a level playing field, are maintained," he wrote. "Our international partners must also continue to stand firm for the values and principles in which we have all invested for 20 years."

But several Ghani administration officials refute the accusation of foot-dragging and say they believe the United States will continue to support the Afghan government throughout negotiations. They requested anonymity because peace talks are not part of their direct purview.

Intizar Khadim, the director for peace and civilian protection at Afghanistan's National Security Council, says any delays are largely a matter of logistics. He rejects the Taliban's claim that it has released the 1,000 Afghan security forces required by the deal. "We also expect releases should start by the Taliban side as well. Releases should be reciprocal," he says.

5/6 As we have supported the Afghan people for the past 19 years, so do we now support Afghan men and women to achieve the sustainable peace for which they have long yearned.

U.S. envoy Khalilzad says Afghans should trust America. "As we have supported the Afghan people for the past 19 years, so do we now support Afghan men and women to achieve the sustainable peace for which they have long yearned," he wrote in a recent tweet.

But one of the Afghan sources close to the negotiating team contrasts how he predicts the troop withdrawal would be under Joe Biden. "The withdrawal will be responsible and organized. It will not happen D.C. morning time with a tweet," he says.

He explains that Afghan negotiators believe the presumptive Democratic nominee will listen to bipartisan security advisers and not make hasty decisions.

However, the Crisis Group's Watkins says "it would be a big mistake for the Afghan government to hope for a significant difference between President Trump and a hypothetical President Biden's desire to withdraw from Afghanistan."

In a February interview with CBS' Face the Nation, the former vice president said he had opposed the large numbers of troops sent by his and Trump's administrations and believed "a very small U.S. presence" of "several thousand people" should remain in Afghanistan to deter ISIS or al-Qaida from establishing a foothold from which to attack the United States. He said he would bear "zero responsibility" if the Taliban regained control after the drawdown.

If foreign forces withdraw without a clear roadmap for supporting Afghan peace negotiations, "it would be catastrophic for the Afghan state," says Clark. "There is no Plan B for Afghanistan as far as I can see from talking to officials in Washington. If the talks don't work out, what happens next?"

Now though, international pressure could be throwing another wrench into the works. Afghan officials reportedly halted the release of the last few dozen Taliban prisoners after France and Australia objected to freeing militants involved in attacks on their citizens.

In the audio, as in a previous Web version, we incorrectly call the Afghanistan Analysts Network the Afghan Analysts Network. In a previous Web version, we also misidentified Intizar Khadim as an official on the Afghan negotiating team. While peace negotiations are in his purview as a member of Afghanistan's National Security Council, he is not one of the negotiators.