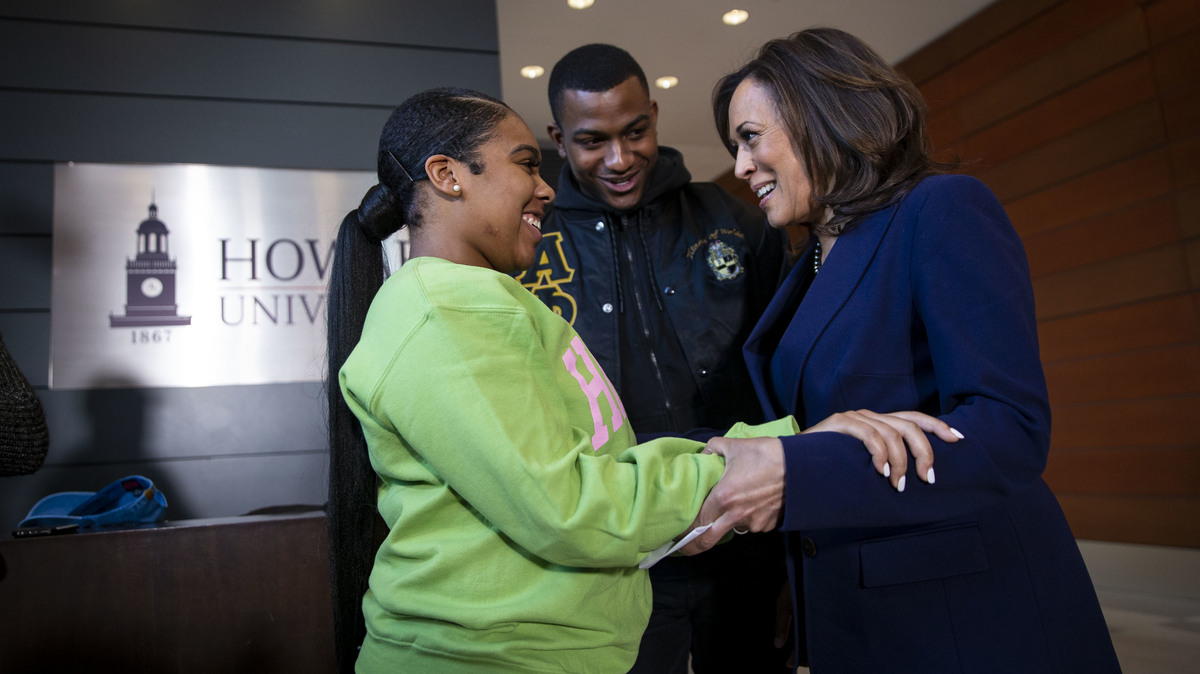 A couple of years before California Sen. Kamala Harris announced that she would run for president, she returned to Howard University to speak to the graduating class.

"First, to lead and to thrive, you must reject false choices. Howard taught me, as it has taught you, that you can do anything and you can do everything," Harris told the 2017 graduates.

After attending elementary school in Berkeley, Calif., and high school in Montreal, Harris decided on Howard and was focused on becoming a lawyer.

"So when it came to college, I wanted to get off on the right foot," she wrote in her book, The Truths We Hold. "And what better place to do that, I thought, than at Thurgood Marshall's alma mater?"

In choosing Howard, regarded as one of the nation's premier historically Black educational institutions, Harris was immersing herself in Black culture and Black life. She pledged Alpha Kappa Alpha, the nation's oldest Black sorority, founded more than 100 years ago at Howard. She attended protests against apartheid.

4 Takeaways From Night 2 Of The Democratic National Convention

"I know the feeling that Kamala Harris felt, to say, 'I'm choosing to go to Howard.' And I think that choice is so important to uplift," said Stefanie Brown James, the co-founder of Collective PAC, which works around the U.S. to get Black candidates elected. She graduated from Howard in 2004.

"It is just this mix of being able to question, being able to reveal, being able to become grounded in yourself as a Black person and then figuring out, 'OK, how can I show up best in this world that doesn't always want me to be my best self?' "

When Harris moved into Eton Towers in the fall of 1982, she added herself to a long lineage of prominent Black leaders who count themselves as alumni: activist Stokely Carmichael, author Toni Morrison, Rep. Elijah Cummings and writer Zora Neale Hurston among them.

"The thing about the early '80s is you still had a sizable number of people who we study now in civil rights who were still very young ... and Howard was the center point for that," said Eric Easter, who graduated from Howard in 1983, the year after Harris enrolled, though the two did cross paths.

Around the same time Harris and Easter were both at Howard, a number of descendants of civil rights icons were also on campus, like the children of Jesse Jackson and Andrew Young. It was the center of Black intellectual life and full of possibility and empowerment.

"Stokely Carmichael used to walk around the dorms and talk to us — they were just available to you," said Easter. "You took it for granted that you had access to the world's greatest thinkers in politics and activism."

Michelle Obama Rips Trump As 'Clearly In Over His Head'

Harris described Howard as a "place where you didn't have to be confined to the box of another person's choosing" and where students were not just told "we had the capacity to be great; we were challenged to live up to that potential."

Howard University was one of Harris' first stops when she announced that she would run for president. She faced reporters as a candidate for the first time on campus.

Standing behind a lectern before a throng of journalists and cameras, Harris called the institution "one of the most important aspects of my life."

"It is where I first ran for my first elected office, which was freshman class representative of the Liberal Arts Student Council, so this is where it all began," Harris said.

She took questions from reporters, including one from a reporter who interrogated her background, asking Harris about her heritage as a Black woman who is a daughter of Jamaican and Indian immigrants.

"How do you describe yourself?" the reporter asked her.

Throughout her primary campaign, which ended in December, Harris' ties to Howard were readily apparent.

Soon after launching her campaign, she spoke at the annual Pink Ice Gala hosted by Alpha Kappa Alpha in South Carolina, one of numerous occasions in which Harris would find herself surrounded by sorors in trademark pink and green.

At the South Carolina Democratic Party Convention last year, Harris swayed and clapped along with a drum line, the most attention-grabbing entrance of any of the presidential candidates who participated in the campaign cattle call. 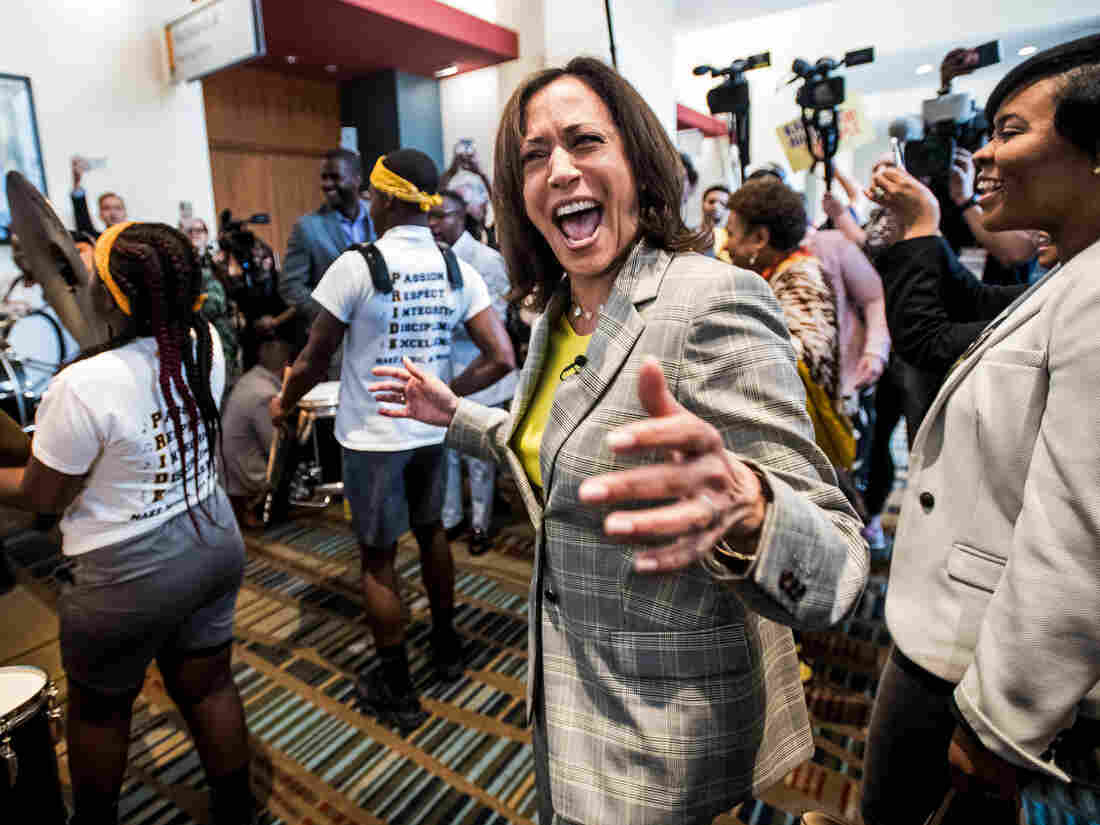 Sen. Kamala Harris dances with a marching band upon arrival at the South Carolina Democratic Party Convention in June 2019, when she was a presidential candidate in the Democratic primary race. Sean Rayford/Getty Images hide caption 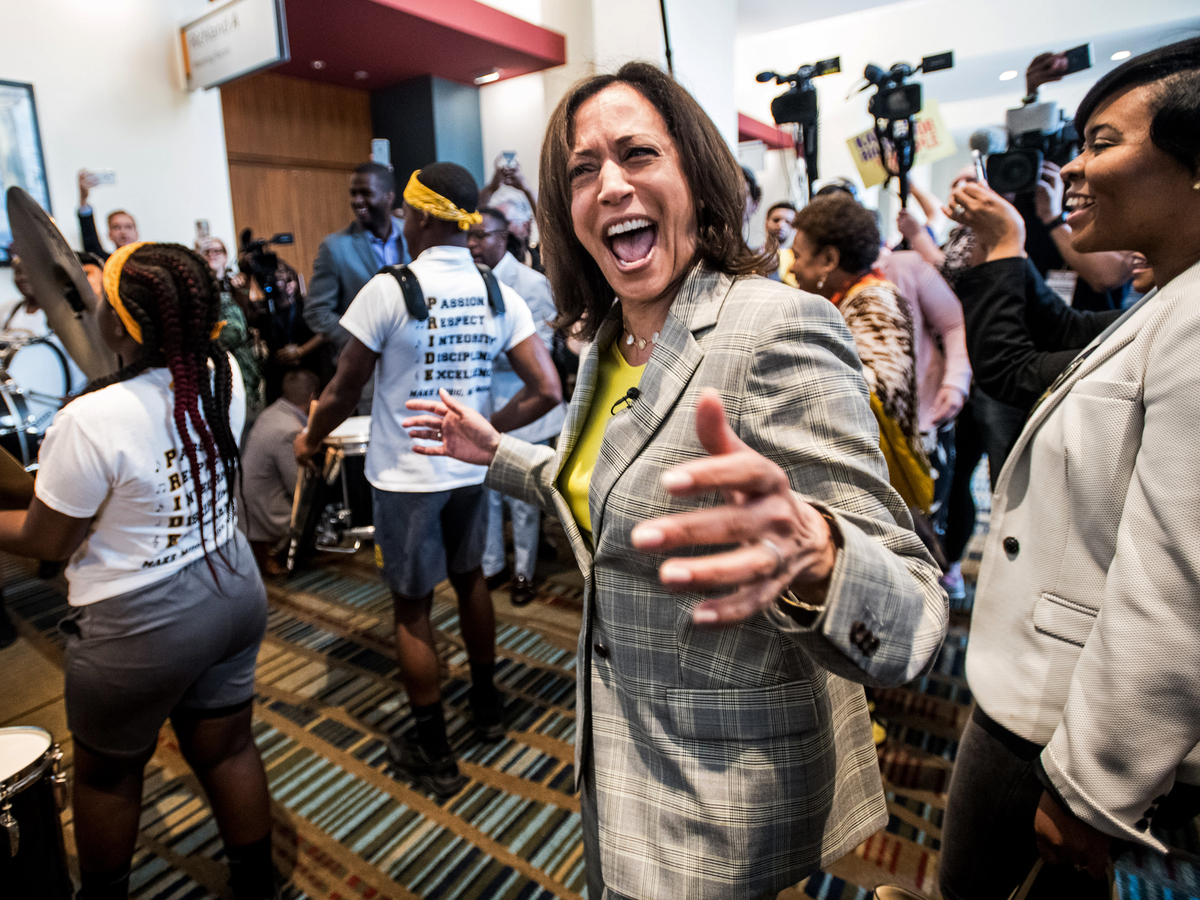 Sen. Kamala Harris dances with a marching band upon arrival at the South Carolina Democratic Party Convention in June 2019, when she was a presidential candidate in the Democratic primary race.

There were less scripted moments, like when Harris was touring small businesses in Columbia, S.C., and stopped mid-speech to greet a fellow Howard Bison who dropped by a restaurant, wearing a crew-neck Howard sweatshirt.

"We both went to Howard. ... I was there before her," Harris said, drawing laughs from the crowd after she embraced the woman.

Harris was even photographed by her husband while wearing a Howard University sweatshirt during the Democratic National Convention roll-call vote to nominate Joe Biden on Tuesday.

Alumni say that one thing unique about the Howard experience is that you know that you're being evaluated on your merits.

"I tell people oftentimes, when you get a D at Howard, you don't question whether or not that grade was based on the color of your skin or where you came from. On the same token, you also know that when you get an A+, you also know it was because of your intellect," said Howard University President Wayne Frederick, who is also a three-time Howard alum.

"The environment is about your excellence and your success," he added.

Erin Keith graduated from Howard in 2013. Like Harris, she went on to law school after graduation.

"When you walk across a campus where so many people look like you ... and who are proud, you kind of shed your impostor syndrome at the door, or at The Yard, for lack of a better way to put it," she said, referring to the main quadrangle on campus.

"One of the things that Howard teaches us is that Blackness is not a monolith, that people of the diaspora are diverse and that it's to be celebrated — there's no one way to be a Black person," Keith added.

Biden Faces A Convention Test, To Offer A Vision Beyond Beating Trump

In that 2017 commencement speech, Harris explained that she chose her own path.

"So the notion of rejecting false choices that Howard taught us has carried me throughout my career: as the district attorney of San Francisco, as the attorney general of California and now as a United States senator," she said.

On Wednesday, the lessons of Howard University will help carry her to be the vice presidential nominee of the Democratic Party.