Accessibility links
Opinion: Israel And UAE's Accord Is A Big Win, But Don't Overplay It If the deal holds, the United Arab Emirates will be the first Gulf state to normalize relations with Israel, but there are many potential bumps in the road, writes Aaron David Miller.

Opinion: Israel And UAE's Accord Is A Big Win, But Don't Overplay It

Opinion: Israel And UAE's Accord Is A Big Win, But Don't Overplay It 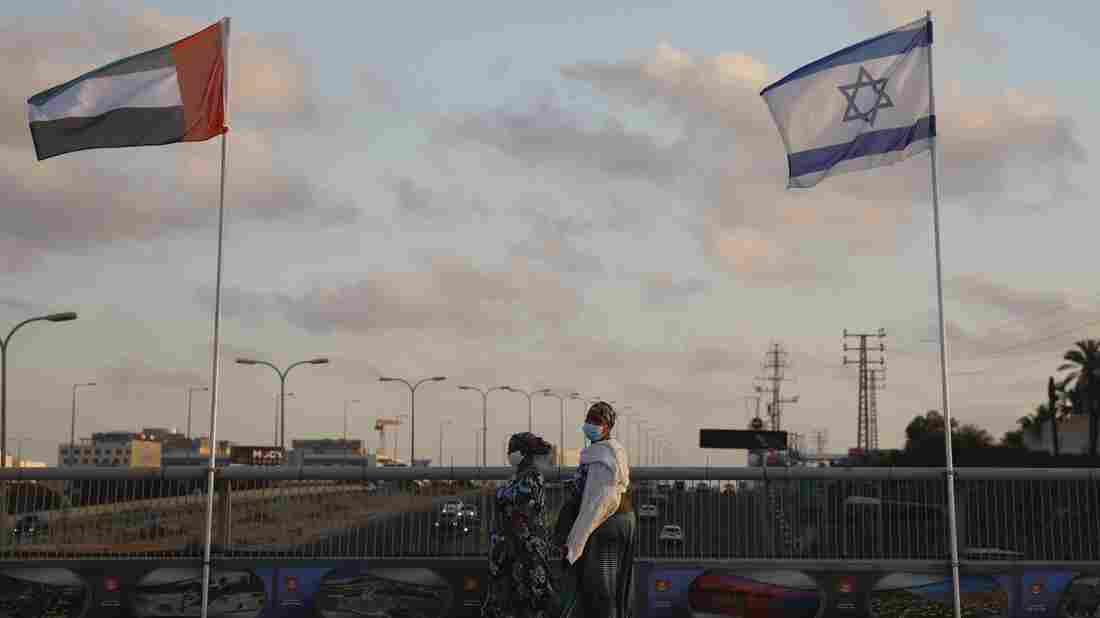 The flags of the United Arab Emirates and Israel are raised on the Peace Bridge in Netanya, Israel. The UAE flag was displayed to celebrate last week's announcement that the two countries have agreed to establish diplomatic relations. Ariel Schalit/AP hide caption 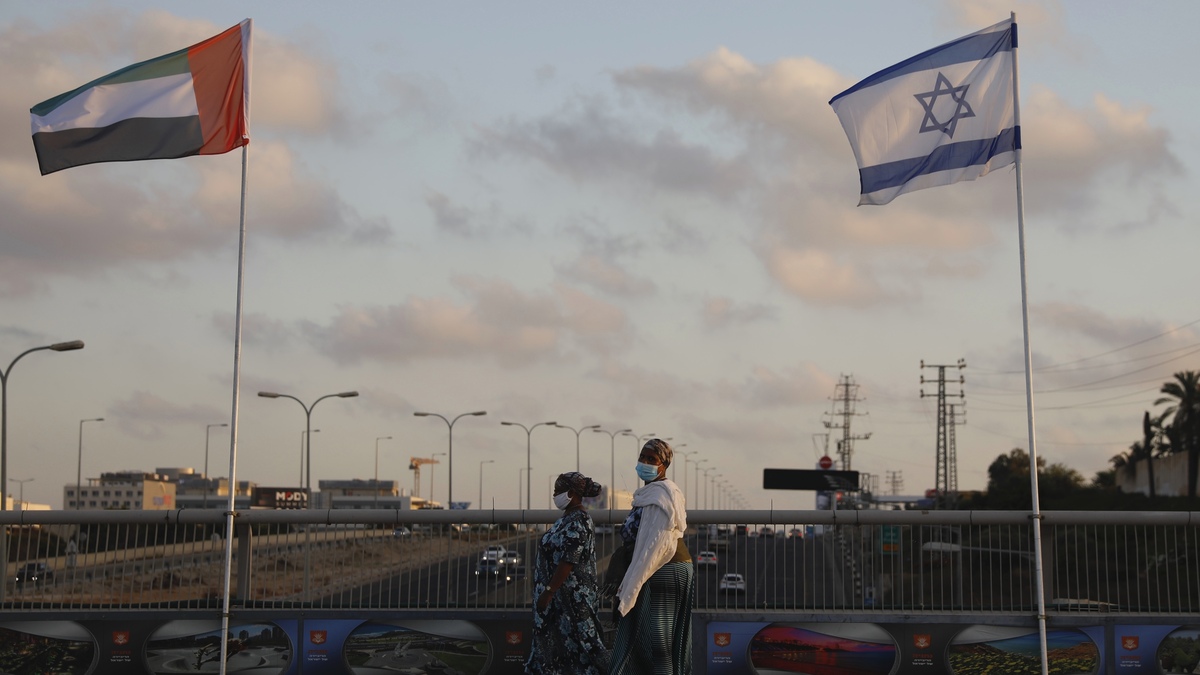 The flags of the United Arab Emirates and Israel are raised on the Peace Bridge in Netanya, Israel. The UAE flag was displayed to celebrate last week's announcement that the two countries have agreed to establish diplomatic relations.

Aaron David Miller (@aarondmiller2), a senior fellow at the Carnegie Endowment for International Peace, served for more than two decades as a State Department Middle East analyst, adviser and negotiator in Republican and Democratic administrations. He's the author of The End of Greatness: Why America Can't Have (and Doesn't Want) Another Great President.

Watching the hoopla over Israel and the United Arab Emirates' accord to normalize relations, I couldn't help recall sitting on the South Lawn of the White House on Sept. 13, 1993, as President Bill Clinton, Israeli Prime Minister Yitzhak Rabin and President Shimon Peres and Palestinian leader Yasser Arafat concluded the historic Oslo Declaration of Principles. Caught up in the moment, I was persuaded we'd reached a point of no return and that peace between Israel and the Palestinians was now irreversible.

The process of establishing formal contacts between Israel and the UAE should be a much simpler affair than the complexities of an ill-fated interim process that lies broken, battered and bloody 27 years on. But listening to the hype, largely by the Trump administration, one could be forgiven for concluding the new Abraham Accord is the greatest breakthrough since the invention of Saran Wrap. Critics contend that because it ignores the Palestinians, it is a giant leap backward. It's neither, of course. And that's why a more measured assessment is in order.

Success in any endeavor in the Middle East is hard to achieve and to sustain. And especially for the Trump administration, which has fumbled, mumbled and stumbled there, this is a significant win. President Trump says he helped bring Israeli Prime Minister Benjamin Netanyahu and UAE Crown Prince Mohammed bin Zayed to agree to normalize relations. Key to the diplomacy and — according to their statement — at Trump's request, "Israel will suspend declaring sovereignty over areas outlined in the President's Vision." In other words, Netanyahu agreed to hold off on a White House-backed promise to annex parts of the West Bank, a plan that's drawn widespread criticism from countries insisting the future of that land should be negotiated with the Palestinians.

So far, however, the new accord has brought us no closer to serious negotiations between Israel and the Palestinians, who accuse the UAE of betrayal for rewarding Israel without concern for Palestinian rights.

Still, if the new accord holds, it will be consequential: The UAE would be the first Gulf state to recognize and normalize relations with Israel. And if diplomacy moves smoothly, other countries such as Oman, Bahrain and Sudan may follow suit.

In 2017, in one of my first meetings with President Trump's adviser and son-in-law, Jared Kushner, who sought my advice, he made clear that the administration would invest heavily diplomatically in the Gulf states, particularly Saudi Arabia and the UAE. Common interests were emerging between Israel and Gulf countries, driven by fear of a rising Iran, frustration over the ceaseless Israeli-Palestinian conflict and a desire to court Washington. Kushner and company pushed the idea of closer contacts and normalization from the outset — and it paid off.

Still, some perspective is needed. The Abraham Accord is not a peace treaty nor is it comparable to Israel's 1979 treaty with Egypt or its 1994 agreement with Jordan. The Egypt-Israel accord took the largest, most powerful Arab state off the confrontation line and, however imperfect, has lasted more than four decades. It has survived the murder of the Egyptian leader who signed it and reshaped the power balance in the region, dramatically reducing the possibility of war.

The Israel-Jordan treaty — now in its 26th year — secured Israel's longest, least defensible border, made Jordan a potential partner with Israel on the Palestinian issue and opened the door to closer U.S.-Jordanian relations. It further spurred economic development and a web of bilateral intelligence, security, water usage and economic relations.

But in some respects, ties between the UAE and Israel could be more natural and less tense than with Cairo or Amman, especially between their private sectors. Israel's Economy Ministry estimates that exports to the UAE could increase from an annual $300,000 to $300 million-$500 million, and for annual UAE investment in Israel to reach $350 million.

The UAE is a tiny but functional polity with deep pockets and a highly skilled military that seeks to project power beyond its borders. It neither shares contiguous borders nor a confrontation line with Israel. Right now, the accord's impact on broader political or military aspects of regional security is questionable. Washington or Israel may try to enlist the Emirates in an active anti-Iranian coalition or in Israel's efforts to deter Iranian influence in Syria, but that won't be easy. The UAE has economic and political ties to Iran and a desire to attract its tourism and business, which would make the Emirates a sure loser in the event of conflict between Iran and the U.S.

Perhaps a more accurate way to evaluate this agreement is the consolidation and formalization of ties that have been in the works, largely subterranean, for a decade or more. But the strategic impact — at least for now — won't be nearly as consequential as Israel's peace treaties. Should other Arab states follow, and cooperate with Israel in a regional organization or grouping, it might become a different story.

Let's remember Israel and UAE are at the start of a fledgling and undefined process with many potential bumps in the road.

One complication is the possibility that UAE, now at peace with Israel, could purchase advanced weapons systems like F-35 jets from the United States. With normalized relations with the UAE, Israel would be less able to make a compelling case against the sale.

Another potential problem has to do with Netanyahu's approach to the UAE agreement. He has already boasted that, in contrast to his predecessors, he reached a deal with an Arab country "without conceding to Palestinians' demands." Under fire from right-wing religious Zionists and settlers, Netanyahu said annexation plans are on "temporary hold." Although, despite his campaign promises, annexation may prove to be an empty threat. The problem for the Emiratis and the accord is that they are now both tethered to a volatile Israeli prime minister under indictment and always under pressure from his political right. Should he call for a fourth election to secure the majority in parliament he needs to undermine the indictments and his trial, he could easily put annexation back on the table.

Even if he doesn't, any number of other crisis points — from continuing settlement activity in the West Bank or Jerusalem to conflict with Hamas in Gaza or the deaths of Palestinian civilians — could torpedo the normalization process with the UAE and stop others from following. Attracting other Arab states to the table will require Netanyahu to be on his best behavior. But that is hardly a sure bet, with the Palestinian issue still unresolved and roiled by the accord. Arab states have largely detached themselves from the Palestinian issue, which has weakened the Palestinians' leverage. But Arab countries will not abandon the matter entirely. And that means as long as there's no progress on the issue, it will continue to stress Israel-Arab state relations.

Gauging the significance of the Israel-UAE accord — still a work in progress — might have been easier had the Trump administration not hyped it as the most significant diplomatic accomplishment of the century. With Trump campaigning for reelection in November amid a stream of bad news and worse polls, it is clear why the administration saw the deal as worth inflating. But it pumped a lot of air into the balloon.

With a preternatural obsequiousness, national security adviser Robert O'Brien called Trump a great deal-maker and said it wouldn't surprise him if the president was "eventually nominated for a Nobel Peace Prize."

Secretary of State Mike Pompeo called the accord "an enormous, historic step forward" for the Middle East to be stable and peaceful.

And Kushner wrote in The Washington Post that Trump had rejected the old ways of the past and created a "strategic realignment" in the region. Ignoring the fact that at least four Arab states are in active phases of meltdown and failing to mention the word Palestinians, Kushner concluded that President Trump had finally put "the people of the Middle East on a path to a very bright future."

The administration has every right to take credit for an unprecedented agreement. But it would be wise not to overrepresent its significance. The Middle East is literally littered with the remains of great powers who wrongly believed they could impose their will on smaller ones. And it can be a cruel teacher for the arrogant, the naive, and those who believe they have the key to fixing it.

The Israeli-UAE accord holds tremendous promise and should be celebrated. But what is required now is less crowing and more humility, vision and a clear sense of direction by those within and outside the region to tackle the tough challenges that remain.