Accessibility links
If Biden Wins, He Will Face A Familiar Roadblock: Congress If Joe Biden wins the White House, he will confront a familiar roadblock to advancing his agenda: a polarized, closely divided Congress. 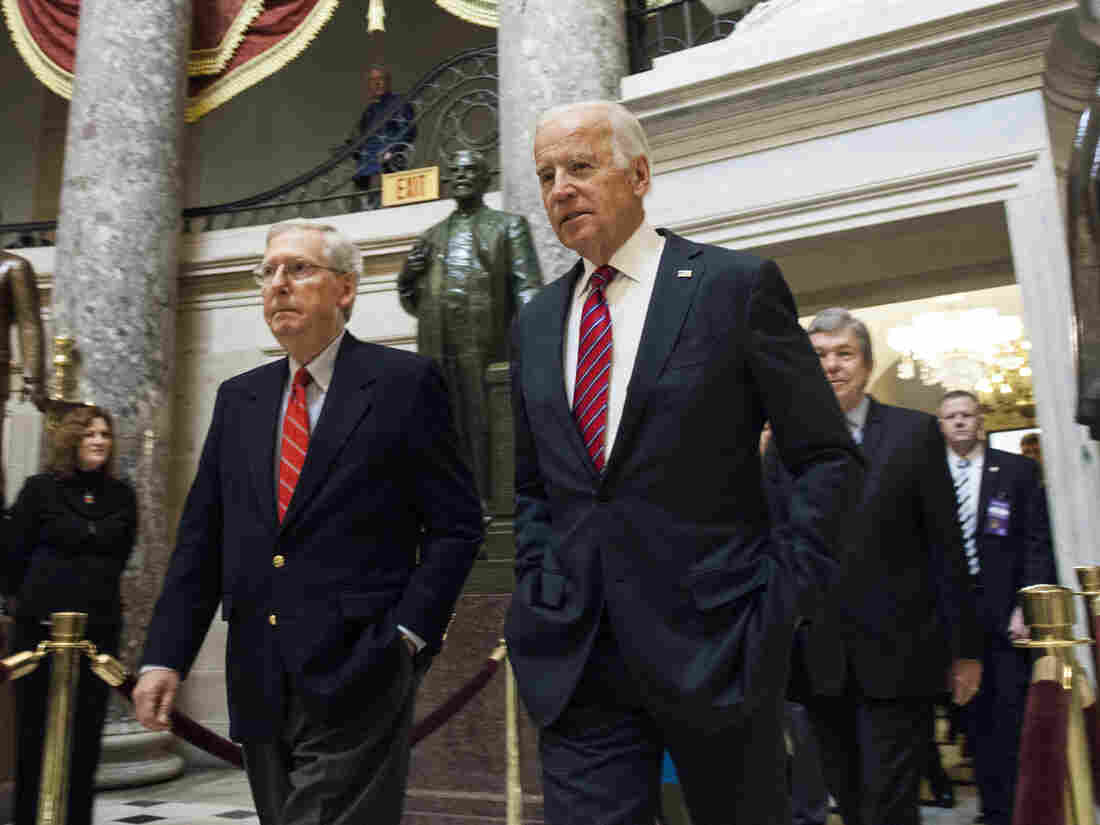 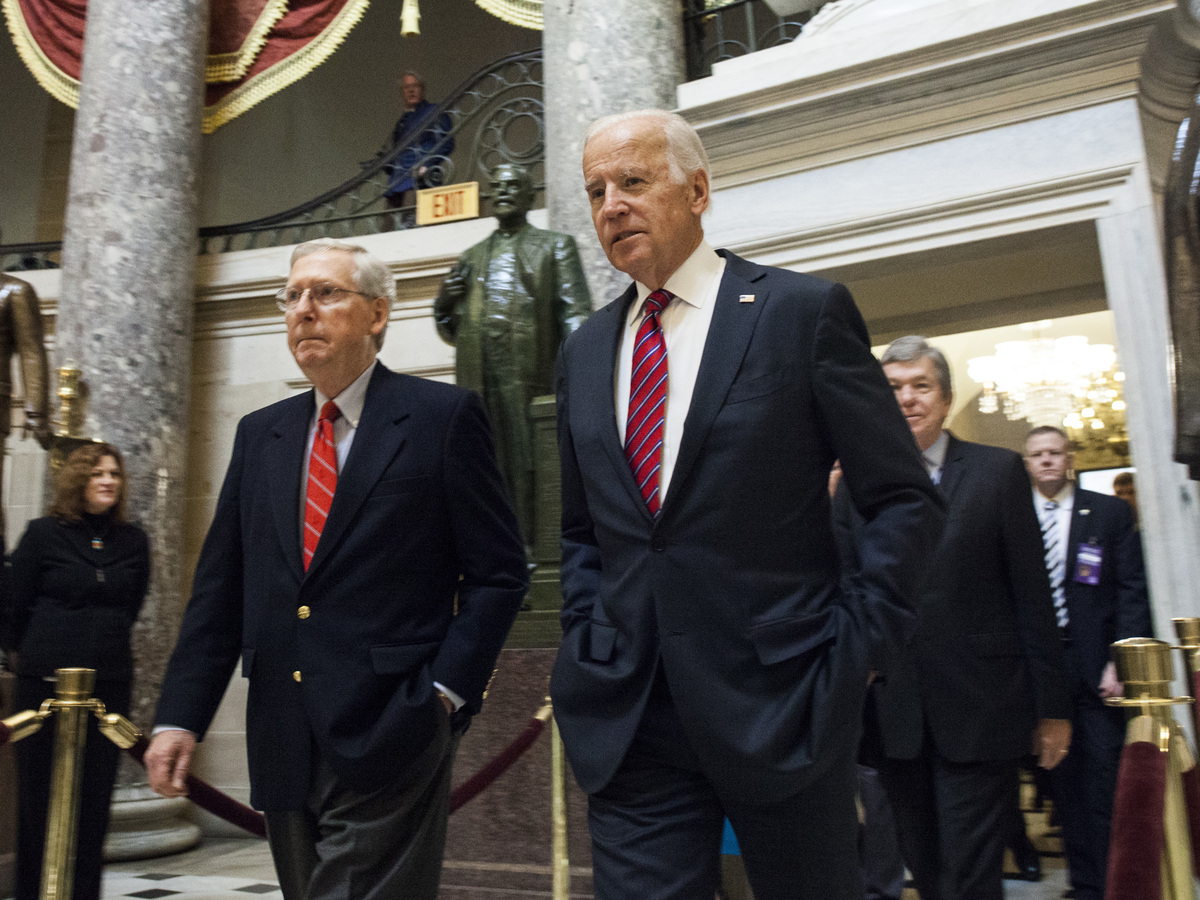 Senate Majority Leader Mitch McConnell and then-Vice President Joe Biden walk through National Statuary Hall on their way to a joint session of Congress on Jan. 6, 2017.

As former Vice President Joe Biden prepares to give his acceptance speech for the Democratic presidential nomination on Thursday night, Democratic lawmakers and strategists are preparing for what a Biden administration could look like, what the priorities would be and whether anything can actually get done in a Washington accustomed to doing very little.

"As Vice President Biden would be taking office, we'd have exploding deficits and unemployment again, the coronavirus crisis, a health care system that's gotten weaker over the last four years, climate change and weakened international relationships," said Phil Schiliro, who ran congressional affairs for the first-term Obama administration, "so his first challenge would be to try and clean up the mess."

As President Obama did during the Great Recession, Biden would take office at a time of national crisis, and that would drive the focus of the early days of his administration, said Schiliro. And like Obama, he expects Biden would extend a hand to congressional Republicans to try to craft bipartisan responses to solve the crisis — although, he noted, those efforts were fruitless under Obama. "It didn't seem to make any difference with congressional Republicans because they wanted President Obama to own the problems and own fixing the problems. I hope that won't be the case for Vice President Biden if he's elected — but it could be," Schiliro said.

Working across the aisle

Democrats are skeptical that congressional Republicans will approach a new Democratic administration any differently from the last one, but how Republicans respond could have a decisive impact on Congress and the Biden agenda.

"They're going to need to get Republicans to actually go along early and quickly to disprove the assumption from many on the left that it is impossible for Republicans to swing back to the old days of more bipartisanship," said Democratic strategist Mike Spahn, a former chief of staff to Sen. Patty Murray, D-Wash.

Biden is a Senate veteran who prides himself on his interpersonal relationships, but it's a different era on Capitol Hill. "The Senate has changed dramatically," said Senate Minority Whip Richard Durbin, D-Ill. "We've stopped legislating. We've stopped deliberating. All we do is move forward with [Senate Majority Leader Mitch] McConnell's list of preferred nominees for the federal bench for lifetime appointments."

4 Takeaways From Night 3 Of The Democratic National Convention

It's why Democrats — should they win control of the Senate — will likely confront a long-simmering debate over the filibuster, the procedural tool that allows any senator to block any bill for any reason that can't get a 60-vote supermajority. The filibuster was eliminated by Democrats in 2013 for most executive branch nominations. Republicans further eroded the filibuster for Supreme Court justices in 2017. It is still used to block legislation — a major reason the Senate has reached historic levels of low productivity in the past decade.

"We have not had this debate. I'm not anticipating what the outcome will be," said Durbin. "But we need a serious conversation about the future of the Senate, now that we've seen what's happened over the last several years."

Biden, who had long opposed ending the filibuster, indicated in July that he could be open to it, telling reporters: "It's going to depend on how obstreperous [Republicans] become."

Rep. Henry Cuellar, D-Texas, a centrist who recently beat back a primary challenge from the left, said the gregarious Biden may have more success building working relationships on Capitol Hill than Obama, who was often criticized for his aloof style when it came to lawmakers. "I'll say this very gently: A President Biden will be able to use the White House, maybe Camp David, [to] invite members over to say, 'Hey, let's sit down. Let's talk,' " Cuellar said.

Republicans are not the only source of potential confrontation for a Biden administration. Within the Democratic Party, there is unity on what the major challenges of the day are: health care, the economy, immigration, climate change and democracy reform — but the precise policies to address the issues expose bigger rifts about the path forward.

The progressive wing is rising, particularly in the House, where House candidates aligned with Rep. Alexandria Ocasio-Cortez, D-N.Y., have enjoyed a mini-wave of primary victories in 2020.

Rep. Pramila Jayapal, D-Wash., who co-chairs the Congressional Progressive Caucus, sees the party's progressive wing as the force "to do both the pushing, the walking alongside and the going out in front of Joe Biden" on the agenda.

Progressives like Jayapal say the pandemic and its economic fallout have created an environment that will encourage Biden to take more progressive positions, as Americans demand more from their government to get life back on track. "I think Joe Biden is going to be forced to be bold. I think that the movement will push him and embrace him as he does that," she said.

But Cuellar cautioned that leaning too far left could cost Democrats, noting that the House majority was built by winning in swing districts that elected more centrist lawmakers like himself. "As long as we don't let any fringes take over, I think we can work out compromises," he said, and the burden to find that compromise will fall to Biden.

Schiliro said one of the biggest challenges for any new administration is filling out the executive branch with experienced hands, and that will be a particularly acute task for a first-year Biden administration that will likely want to beef back up federal departments and agencies that Trump worked to reduce.

It's all the more reason Biden will rely on trusted allies on Capitol Hill, of which few remain. Turnover has been high in Congress since Biden left to join the Obama administration in 2009. Just 34 senators remain who served alongside him.

That's why Democrats increasingly believe that if Biden wins, he will want House Speaker Nancy Pelosi to stick around to help advance his agenda. Pelosi was a critical ally to the Obama administration in advancing its early legislative victories, most notably the Affordable Care Act, which both Biden and Pelosi are working to protect and expand. "I would never have thought she has gotten even stronger than where she was in 2009 and 2010, but she is," Schiliro said.