Accessibility links
Shadow Immigration System: Migrant Children Detained In Hotels By Private Contractors The children are held at hotels, instead of shelters, until they can be put on planes to their home countries. This bypasses the normal process that gives children a chance to ask for asylum. 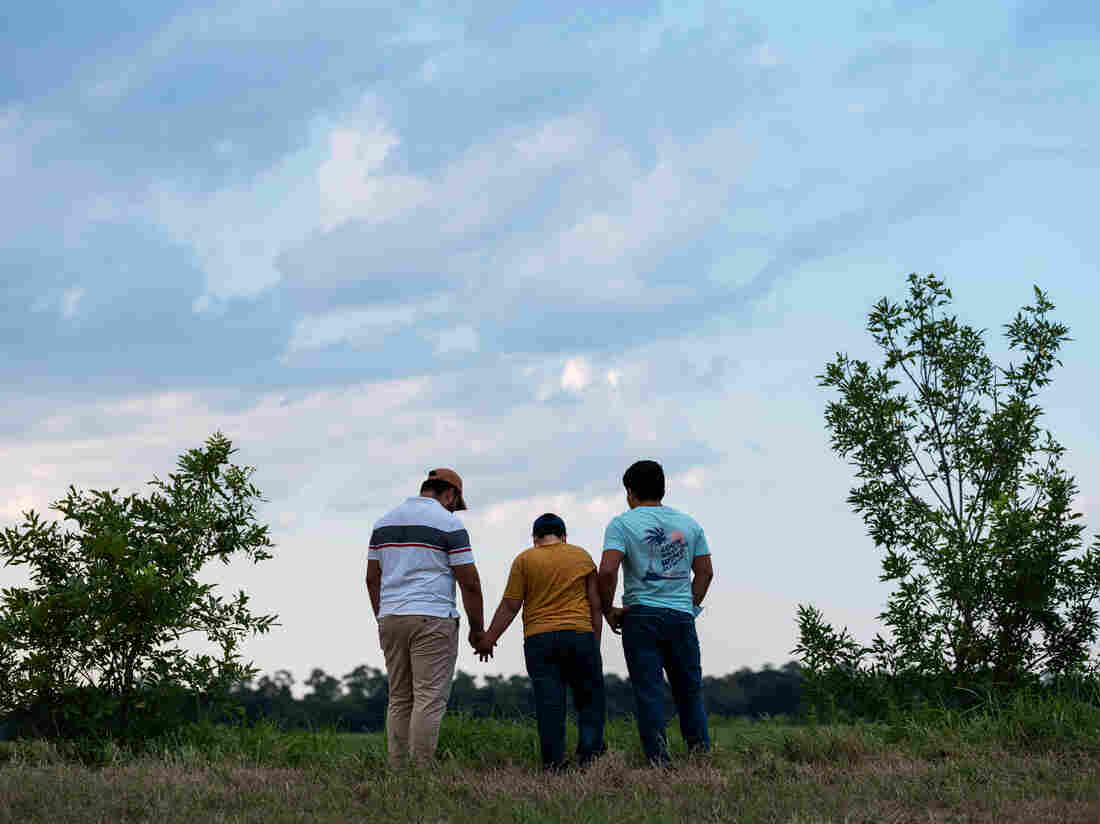 Honduran migrants, Ricardo Sr., (left), his son Ricardo Jr., 13, and his cousin Jorge, 16, walk near their home in Texas. When the two teenage boys crossed the border illegally into Texas last month, they turned themselves in to the Border Patrol. They were later escorted to a hotel by armed men in civilian clothes. Scott Dalton for NPR hide caption 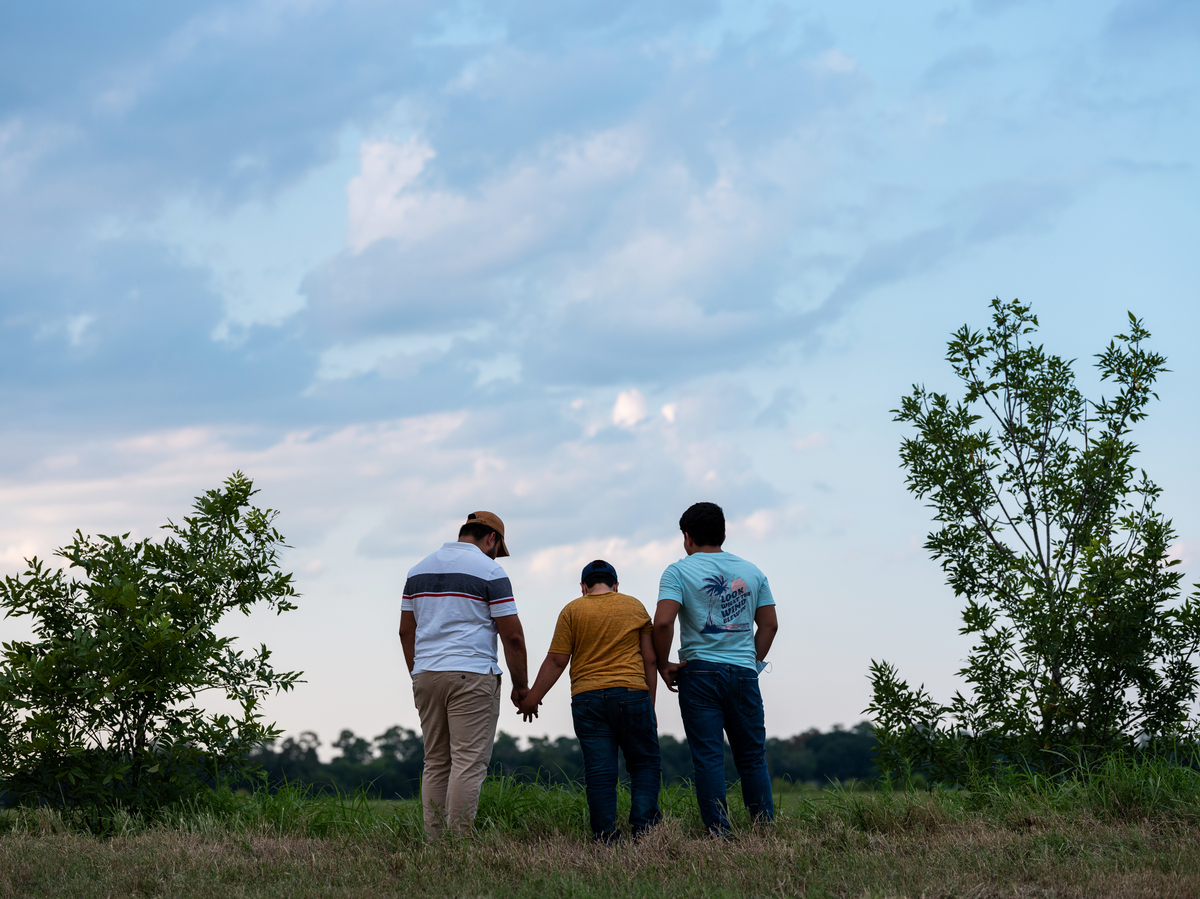 Honduran migrants, Ricardo Sr., (left), his son Ricardo Jr., 13, and his cousin Jorge, 16, walk near their home in Texas. When the two teenage boys crossed the border illegally into Texas last month, they turned themselves in to the Border Patrol. They were later escorted to a hotel by armed men in civilian clothes.

It was late at night when two teenage cousins from Honduras arrived in a hotel parking lot somewhere in the U.S., escorted by armed men in civilian clothes.

The young men crossed the border illegally into Texas last month and turned themselves in to the Border Patrol. After spending the night in detention, they say they were loaded into a van by the men who were not in uniforms and driven three hours to the hotel.

"We went in through a side door. No one was there. We didn't have to sign in or anything. We couldn't see the name of the hotel," Jorge, who is 16, says in Spanish. His cousin, Ricardo, is 13.

Both young men are now in the custody of Ricardo's father, who asked that we not use their last names because they are still in immigration proceedings. They fled Honduras together after gang members threatened their family there.

Since the coronavirus pandemic began, the Trump administration has set up a shadow immigration system on the U.S.-Mexico border. It involves private contractors detaining migrant children in hotels before they are quickly sent home. This allows immigration officials to bypass the normal process that would give the children a chance to ask for asylum here.

Normally, when migrant children traveling alone are apprehended by the Border Patrol, there are special protections that kick in to make sure they aren't sent back to dangerous situations. They're supposed to be detained in child-appropriate shelters before being placed with a sponsor in the U.S. while their asylum cases are heard.

But during the pandemic, that's not happening.

Up and down the border, court documents show, many unaccompanied children have been held secretly in hotels for days, sometimes weeks, until they can be put on planes back to the countries they came from.

The Trump administration says it's trying to protect public health during the pandemic by keeping unauthorized migrants out of detention facilities and shelters in the U.S. The Centers for Disease Control and Prevention issued an order in March directing immigration officials to quickly expel migrants at the southern border.

Under that order, the U.S. has carried out 100,000 expulsions, removing more than 2,000 unaccompanied children, according to Mark Morgan, the acting commissioner of U.S. Customs and Border Protection.

"What we're trying to do, the best we can, is remove all individuals, regardless of whether they're minors or adults," Morgan said at a press briefing earlier this month.

"We're trying to remove them as fast as we can to not put them into our system, to not have them remain in the United States for a long periods of time, therefore increasing the exposure risk to the American people," Morgan said.

For years, the Trump administration has sought to roll back protections for migrant children, which it considers a "loophole" in U.S. immigration law because these children are typically allowed to stay in the U.S. and have a path to citizenship if their asylum claims are successful.

"It's really clear to us that this is a pretext for blocking access to protection for children and asylum-seekers," said Lisa Frydman, vice president at Kids In Need of Defense, or KIND, a nonprofit that's trying to get children released from this shadow immigration system.

"It completely takes them a hundred percent out of all of the special protections that have been put in place in recognition of the vulnerability of unaccompanied children," Frydman said.

Immigration lawyers have discovered where some migrant children have been detained in hotels, and they've gone to court to try to stop their expulsions. In several cases, immigration officials responded by releasing the children to the federally funded shelter system, making those individual court cases moot.

Last week, the American Civil Liberties Union filed a class-action lawsuit on behalf of all migrant children in this situation, hoping to stop the cat-and-mouse game and put an end to the rapid expulsions.

"Ultimately, we had to file this class action," said Lee Gelernt, deputy director of the ACLU Immigrants' Rights Project. "Otherwise, we are looking at potentially thousands more being sent back to danger, without any hearing whatsoever."

BREAKING: Our attorney was aggressively rejected from trying to offer help to immigrant children illegally detained at a Hampton Inn in McAllen, TX. He and another of our staffer were violently shoved into the hotel elevator and were told they could not offer help. #FreeThemALL! https://t.co/xSOxHOViKp pic.twitter.com/MEp7UmK6Gv

The Texas Civil Rights Project also has been working to help these migrant children. It posted a video on social media last month showing attorney Andrew Udelsman confronting several unidentified men at a Hampton Inn & Suites in McAllen, Texas, where the group believes migrant children were being detained.

"If you're detained, give me your name," Udelsman shouts down a hallway.

One of the men says: "Get out if you're smart."

The lawyer then asks if the men are police officers, to which one of them responds: "Don't worry about who we are. Get out."

The men then shove the lawyer back into the elevator. 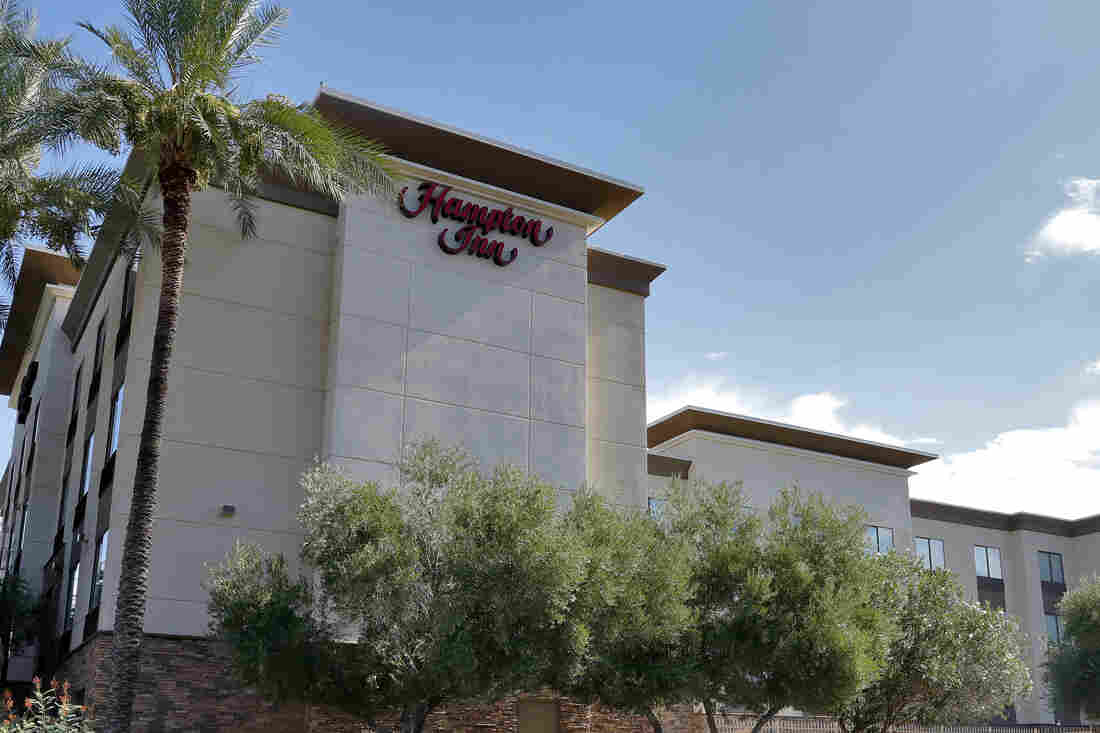 A Hampton Inn is shown on July 21 in Phoenix. The Trump administration is detaining immigrant children in hotels before sending them back to their home countries. A private contractor hired by U.S. Immigration and Customs Enforcement is taking children to three Hampton Inns in Arizona and Texas under restrictive border policies implemented during the coronavirus pandemic. Matt York/AP hide caption 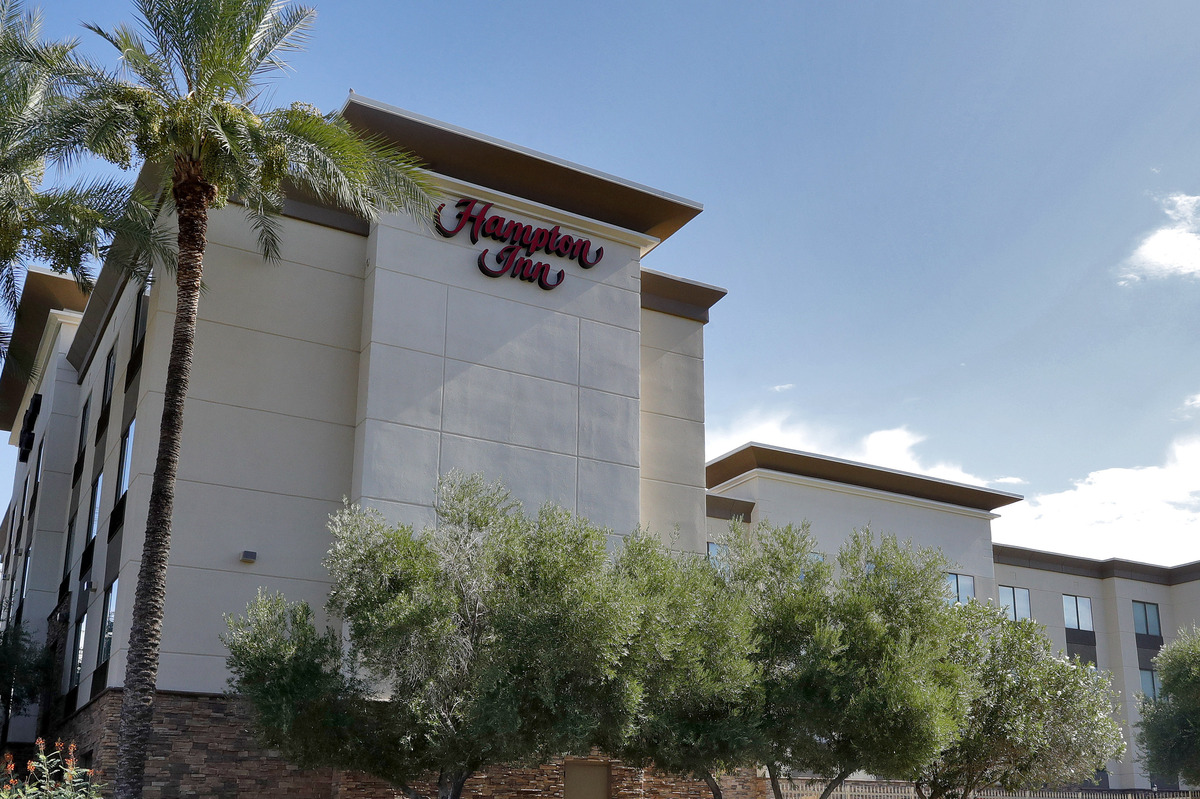 A Hampton Inn is shown on July 21 in Phoenix. The Trump administration is detaining immigrant children in hotels before sending them back to their home countries. A private contractor hired by U.S. Immigration and Customs Enforcement is taking children to three Hampton Inns in Arizona and Texas under restrictive border policies implemented during the coronavirus pandemic.

After the video posted online, the Hilton hotel chain confirmed that the independently owned and managed Hampton Inn had accepted reservations from a private contractor working for U.S. Immigration and Customs Enforcement to house migrants, including children.

"This is not activity that we support or in any way want associated with our hotels," Hilton said in the statement, adding that all Hilton properties are expected to reject that kind of business. "Our policy has always been that hotels should not be used as detention centers or for detaining individuals."

"We believe that hotels should be places of hospitality," the statement read.

Private contractors working for ICE are detaining these young migrants in hotels in McAllen, as well as El Paso, Phoenix and San Antonio, according to court papers.

The practice first came to light in a report filed in federal court last month by Andrea Sheridan Ordin, an independent monitor appointed by a judge in California who is overseeing what's known as the Flores settlement. The decades-old agreement limits the length of time and conditions under which immigration authorities can detain minors in their custody.

"Begun as a relatively small, stopgap measure to assist in the transfer of children to ICE flights, the temporary housing program has been transformed into an integral component of the immigration detention system," Ordin wrote.

The Virginia-based company MVM Inc. has been working for years to transport migrants in ICE custody, occasionally stopping at hotels in transit. Its role has grown as prolonged hotel stays are now "routine," according to Ordin.

MVM Inc. says its contract with ICE prevents it from talking to the media. ICE says these contractors are trained to keep the minors safe and secure.

Meanwhile, the shelter system designed to care for migrant children is nearly empty. According to the Office of Refugee Resettlement, which oversees the shelters, there are currently 835 migrant children in the program, which has a capacity to house more than 13,600 children.

Between April and July of this year, fewer than 350 children were referred to shelters, according to ORR. During the same period in 2019, the number was more than 30,000. 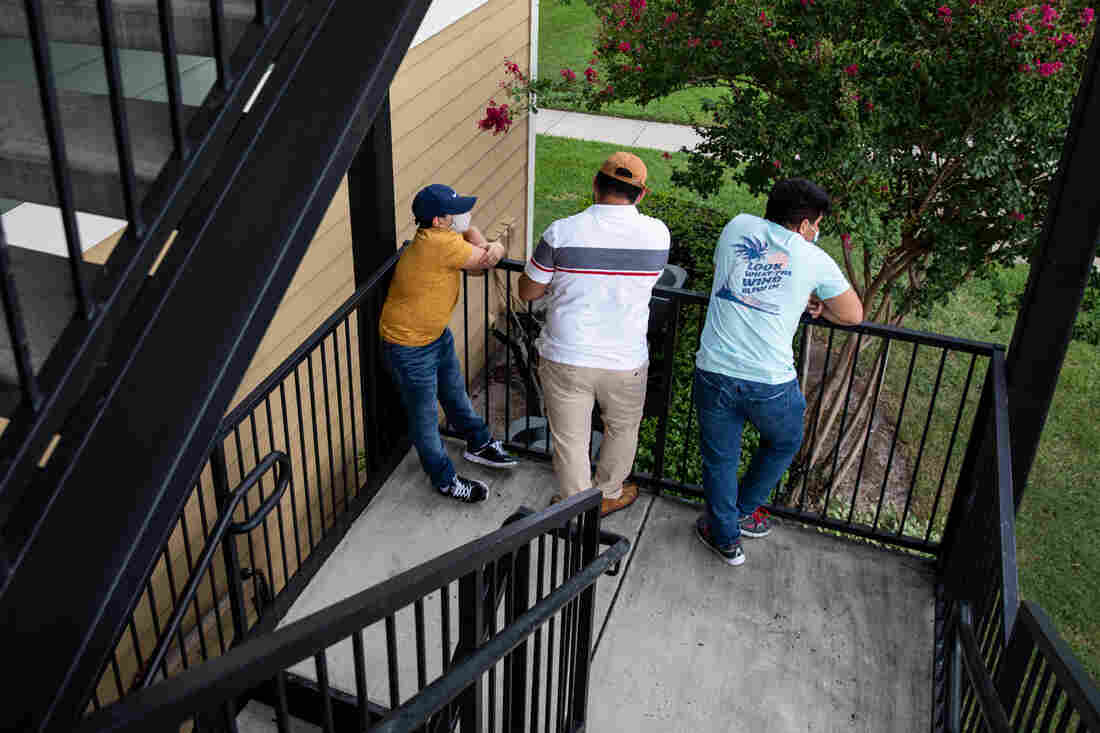 The two teenage boys are now in the custody of Ricardo's father, who asked that we not use their last names because they are still in immigration proceedings. They fled Honduras together after gang members threatened their family there. Scott Dalton for NPR hide caption 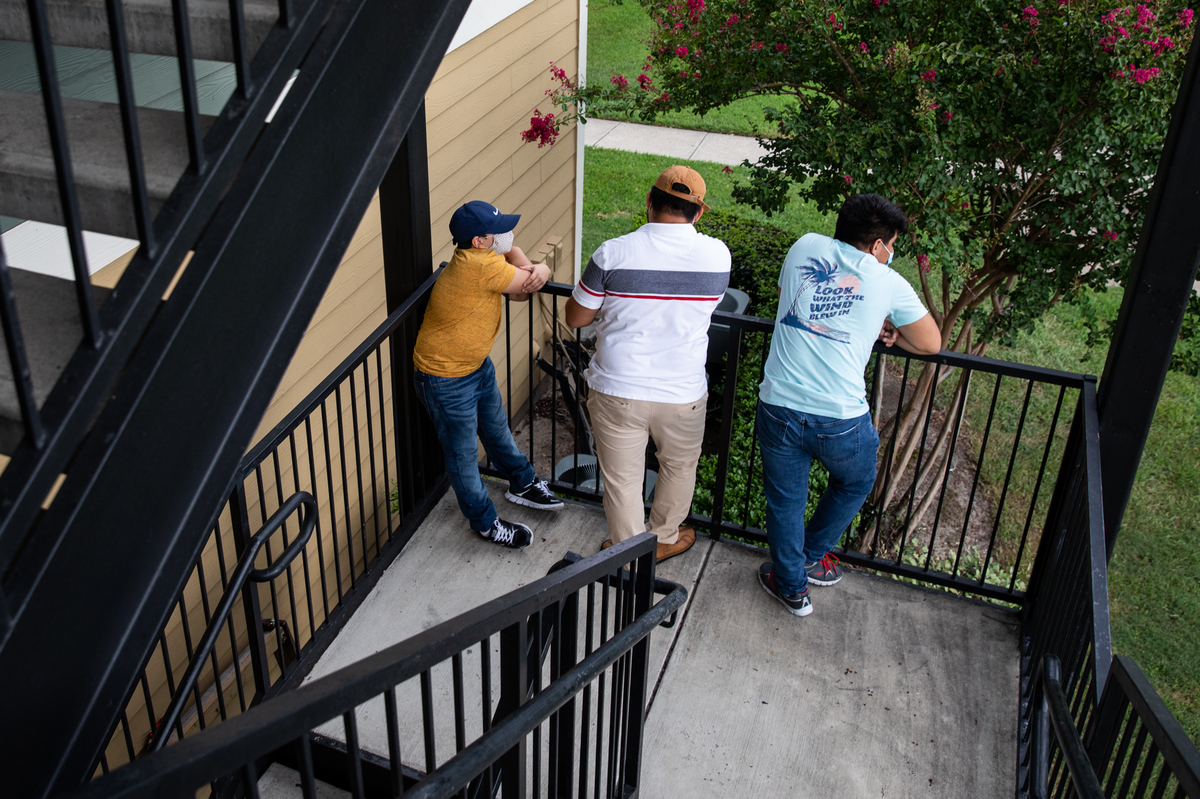 The two teenage boys are now in the custody of Ricardo's father, who asked that we not use their last names because they are still in immigration proceedings. They fled Honduras together after gang members threatened their family there.

The father of the young men who traveled from Honduras to Texas said he was not aware of their plans until they were on their way. The man, Ricardo Sr., lives in Texas. He asked not to use his last name to protect the privacy of the young men.

"I was shocked," Ricardo Sr. says about when he learned they were traveling alone.

Both Jorge and Ricardo Jr. say they were allowed to call their relatives but instructed not to give details about their confinement. So they were relieved when they reached Ricardo Sr. but too scared to tell him where they were.

"We were forced to say that we were OK," Ricardo Jr. says in Spanish. "I wanted to tell him that we weren't getting enough food, that we were not allowed to go out or even to the bathroom."

Jorge says they were not allowed to leave their hotel rooms for six days. "They treated us badly at the hotel," he says. "They threatened us."

The boys figured this was just the normal immigration process in the U.S., but Ricardo's father knew something was off. He's savvy about the system, because he's seeking asylum himself.

"I think I suffered more than the kids because they didn't know absolutely anything of what was happening," he says.

Days would pass when Ricardo Sr. says he didn't hear from the boys or from immigration authorities. He drove six hours across Texas, stopping at every detention center and Border Patrol station to ask about the boys, all the while calling everyone he could think of for help.

In the end, Ricardo Sr.'s frantic search for the teens paid off. He got in touch with KIND. The group contacted immigration authorities, who handed the boys over to a shelter. A few weeks later, they were released to live with Ricardo Sr.

"I have the best dad because he risked it all to be reunited, to see me, to support me," Ricardo Jr. says.

But this family is the exception. For most kids who pass through these hotel rooms, that's all they're going to see during their brief stay in the U.S.