Accessibility links
Can Schools Deliver Services To Students With Disabilities This Fall? When U.S. schools went online-only in the spring, many struggled to provide vital services to students with disabilities. Families, advocates and many educators say this fall has to be different. 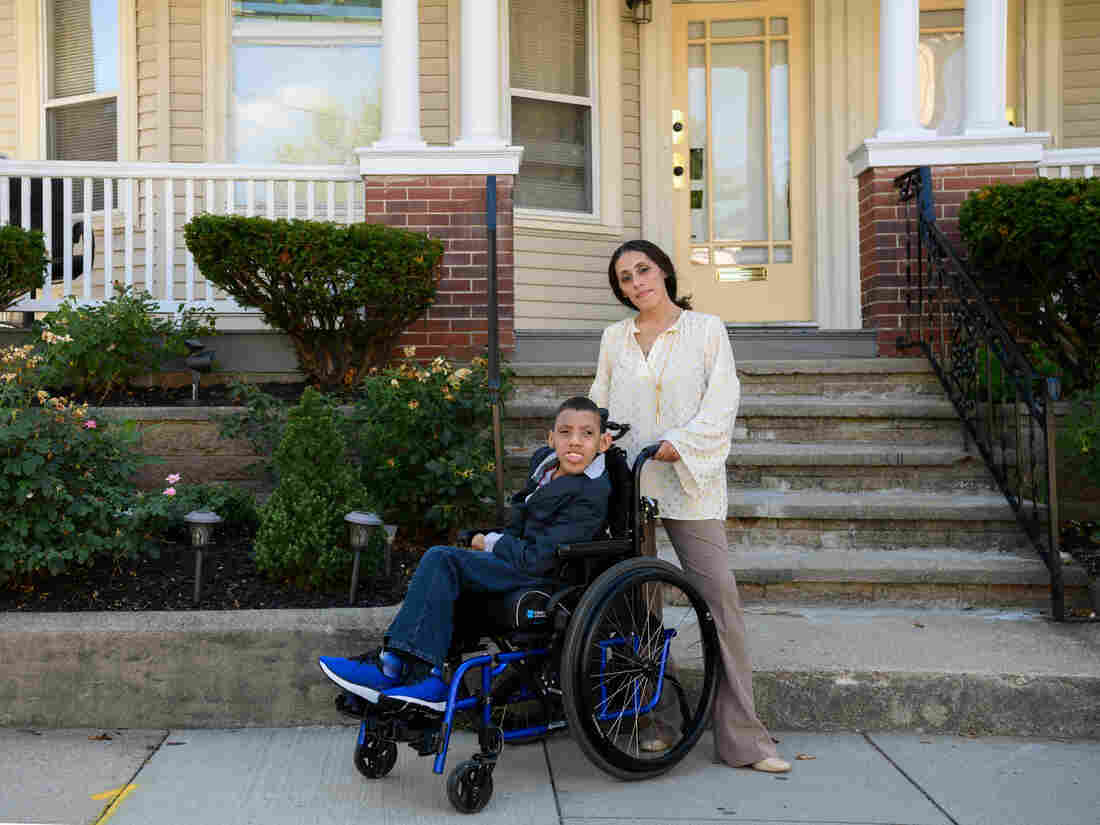 Kendra Mendoza's son, Joshua, has cerebral palsy. She says he loves school, but got little of the therapy he needed this spring. Scott Alario for NPR hide caption Kendra Mendoza's son, Joshua, has cerebral palsy. She says he loves school, but got little of the therapy he needed this spring.

For Sarah McLaren, who lives in a suburb of Minneapolis, talking about the spring is painful. Her daughter, a rising fourth-grader, struggles with auditory processing and receives special education services. But McLaren says her daughter had trouble keeping up with teachers on an iPad because the instruction was almost all talk.

"They'd tell her, 'Look at this problem, look at that problem. No, show me your worksheet,' " McLaren remembers. "The teachers were doing the best they could, but all those rapid verbal directions just overwhelmed her."

McLaren says her daughter went from loving school to dreading it. "[She] would literally run away from the iPad and hide in the closet or under the bed."

More than 7 million schoolchildren receive special education services in the U.S. But this spring, when the nation's schools were forced to teach remotely, many of those children were left behind, and some vital services — including physical, occupational and speech therapies — simply stopped. With many districts planning to continue remote learning in the fall, parents and caregivers expect better this school year. And school leaders know: They've got to do better.

Special education teacher Nikki Allinson, in Washington, D.C., says one of the greatest challenges she faced trying to teach remotely was that many of her students learn with the help of tactile, classroom-based tools — like laminated cards or magnetic letters for word decoding. But, in the spring, kids weren't given those tools for use at home. Allinson says that also made it "nearly impossible" to teach abstract math concepts. "I recorded so many videos of me with Legos, you know, trying to find things that they could use that they would already have at home, like cereal boxes for volume."

Julie Malone, a speech-language pathologist in a San Diego-area school district, says she did her best to help students remotely this spring. "I will tell you, I have never worked harder."

Malone put in 16-hour days, but says she still struggled to help her students over a video connection. Zoom was balky and a poor fit for her special sessions. Making matters worse, many therapy providers say they got little direction from school district leaders about how to deliver their services remotely.

Families Of Children With Special Needs Are Suing In Several States. Here's Why.

"I think districts were completely consumed with what to do with the majority of their kids," Malone says. "And I think special [education] is the harder one to tackle. And I think they left it to last. And it was a mistake."

Or, as Sarah McLaren puts it: "There's an assumption that if we just get iPads to everyone, you know, the kids will be OK. Well, some kids aren't going to be OK. And we need to talk about that."

Some families and advocates have filed lawsuits arguing schools broke federal disability law by providing insufficient services in the spring. The Individuals with Disabilities Education Act and Section 504 of the Rehabilitation Act guarantee students with disabilities the right to a free appropriate public education and protect them from discrimination. In spite of the ongoing pandemic, those laws "have not changed," says Diane Smith Howard, with the National Disability Rights Network. "Those laws have not been repealed. There are no waivers to those laws. So they are in effect."

David Jeck, the superintendent of schools in Fauquier County, Va., believes the reason there haven't been more lawsuits is because, in the early months of the pandemic, parents of children with disabilities seemed to extend school leaders a certain amount of "grace." He describes the jump to remote learning as "every school leader's greatest nightmare," and says parents understood "that we're only human. We're going to do the best we can, and that's what we did."

"The challenge that I give to schools is to really rise to the challenge, meet with families, be creative," says Shawn Ullman of The Arc, a national nonprofit that advocates on behalf of people with intellectual and developmental disabilities. "But you're going to have to be even more creative than you've normally been."

For Malone, the speech-language pathologist, that's meant helping her district choose a new technology platform to replace Zoom for her speech-language sessions. She says now is "the first time since March that I feel like I might actually be able to do my job."

Jeck says his staff have spent the summer reaching out to every family in the district with a child who receives special education services. They're talking through options for the fall, getting creative and updating students' special learning plans, known as Individualized Education Programs, or IEPs.

Though Fauquier County's schools will again be remote when classes resume, Jeck is making an exception for roughly 250 kids, many of them with severe disabilities. These students need physical therapy, occupational therapy and other services that often cannot be provided through a computer screen.

"They need to be served in the face-to-face model," Jeck says, "so that's what we're going to do."

Sarah McLaren's district, outside Minneapolis, is doing something similar, and McLaren is thrilled that her daughter will be heading back to a school building in September. But Kendra Mendoza, in Providence, R. I., says she feels trapped. Mendoza's son, Joshua, has cerebral palsy and a cluster of other conditions that put him in fragile health.

"How do I send him to school if it's going to be a health risk?" Mendoza asks.

Joshua loves school but got little of the therapy he needed this spring. And as a single mom, Mendoza needs him to be in school so she can work. But when she was told Joshua could go back this fall, Mendoza struggled with the decision.

She says many children with severe disabilities aren't just immunocompromised — it's also hard for them to wear masks or keep socially distant. They may need help eating or using the bathroom. Their care is very physical, which puts them at even greater risk. Still, Mendoza says, she'll figure it out. It's other families she's worried about.

"I can't even imagine another mom. What I have working in my favor is I'm stubborn. I'm a glutton for punishment, but what about the mom that's ready to give up?"

Disability rights experts say, this fall, schools have to do better — for the parents who are angry or ready to give up and for the kids for whom remote learning wasn't just inconvenient or boring, it was a painful absence of vital care that could set them back for years.