Accessibility links
Simmering Disputes Over Statehood Are About Politics And Race — And Always Have Perhaps more than any other U.S. state or territory, Hawaii's path to statehood was paved with political obstacles and roadblocks stemming from racism.

Simmering Disputes Over Statehood Are About Politics And Race. They Always Have Been

Simmering Disputes Over Statehood Are About Politics And Race. They Always Have Been 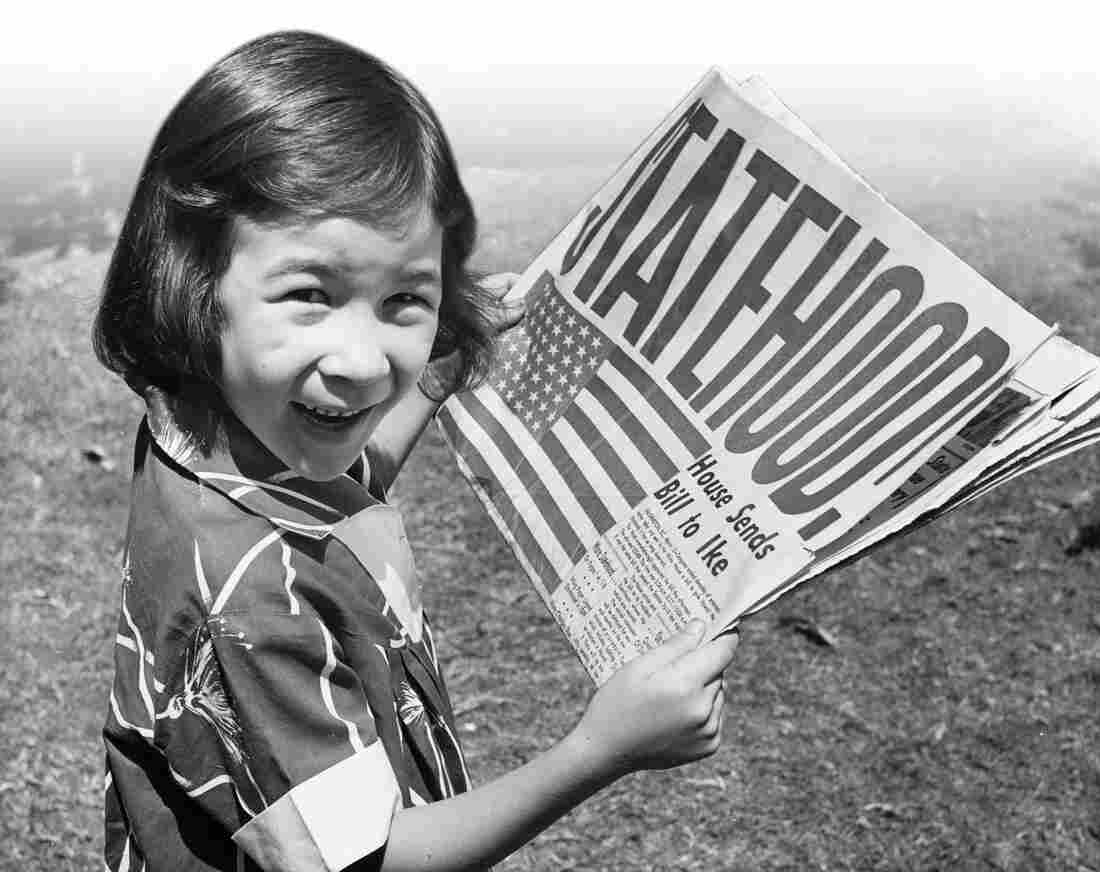 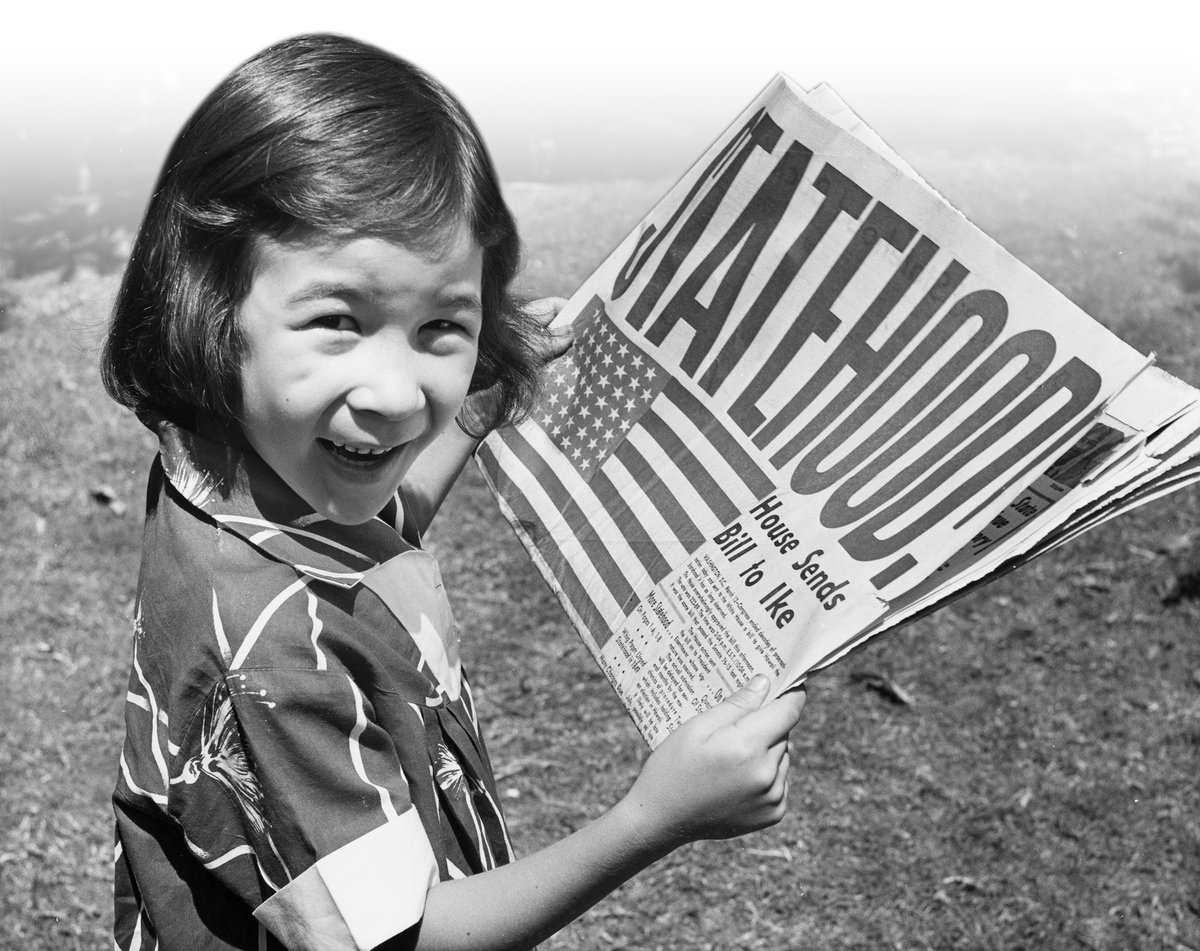 When Arthur Roland Kam thinks back to 1959, he remembers how everyone around him felt a huge political shift as Hawaii became the country's 50th state.

"For a Hawaiian citizen, it was great because it had been a long time coming," Kam describes. He was 28 years old, working for Pan Am on the island of Oahu.

"It was a big moment in my lifetime, to know that we are part of the union now," he says of the pride he felt. "To me, it was a moment to cherish. Now, we have a star on the flag. And that star is Hawaii."

But as the years have passed, many Hawaiians began to mark August 21, the anniversary of statehood, with solemnity, reflecting on the history of the United States' seizure and colonization of the Independent Kingdom of Hawai'i.

"There were benefits and protections that came with statehood, but there's still a painful aspect to the whole history of Hawaii and its overthrow, annexation and statehood," says Sen. Mazie Hirono, D-Hawaii. "There are a lot of people who do not consider [today] as a time of celebration because of the painful history," she adds.

Hawaii's journey to statehood was a complicated one, marked by a series of political calculations and maneuverings in Congress that were amplified by undercurrents — and very often overt displays — of racism.

That story resonates today in the political disputes over the prospect for statehood for the District of Columbia, which has faded from headlines but not disappeared entirely after a push by House Democrats earlier this year.

Sen. Martha McSally, R-Ariz., for example, said this month that she worries that if Joe Biden is elected president and Democrats gain a governing majority, they'll try to make states of D.C. and Puerto Rico. McSally implied the territories' racial makeup would mean they'd likely be easy seats for Democrats to keep and hold.

"We'd never get the Senate back again," McSally said of the GOP.

Race and its implications often are subplots in a state's accession.

In 1893, the monarchy of Hawaii, under Queen Lili'uokalani, was overthrown by white settlers. Five years later, the U.S. annexed Hawaii despite local opposition and protests.

Petitions for statehood began in the first twenty years of Hawaii's territorial status, a process that intensified during the 1930s when sugar interests were threatened by Congressional legislation and the powerful sugar lobby got behind the statehood cause.

"The pressure from within Hawaii for annexation was from an economic elite of Europeans and European Americans seeking economic, political and military protection," says Roger Bell, author of "Last Among Equals," which documents the history of Hawaii's path to statehood.

"The criteria for statehood the Congress imposes include that the population of the territory seeking statehood must demonstrate that they are sympathetic to and imbued with the principles of what Congress called 'American democracy,'" Bell explains. "In other words, that they were Americanized politically and culturally."

During World War II, Hawaii's majority nonwhite population was regarded with suspicion, asked to demonstrate its loyalty to the United States over Japan. But fears over disloyalty faded after the war, in part because of the heroic efforts of the Japanese-American-led 442nd Regimental Combat Team. 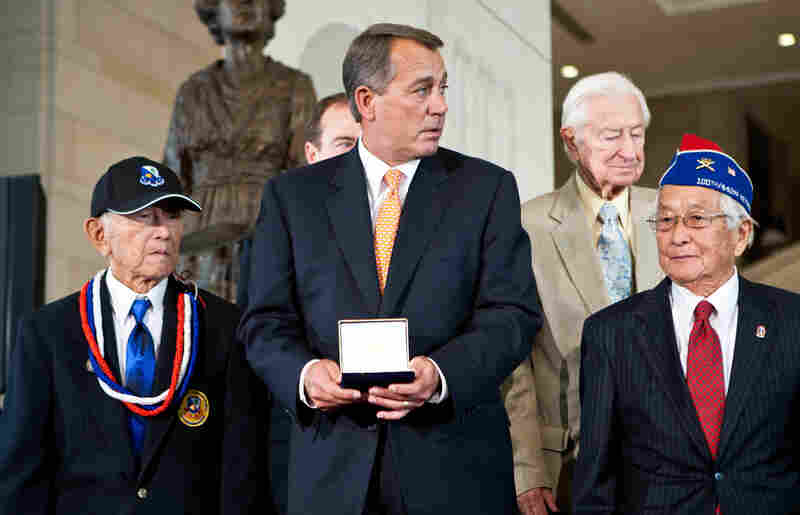 Former Speaker of the House Rep. John Boehner presents the Congressional Gold Medal to Susumu Ito of the 442nd Regimental Combat Team, an Army unit comprised of Japanese Americans from Hawaii which became the most decorated unit for its size and service. Brendan Hoffman/Getty Images hide caption 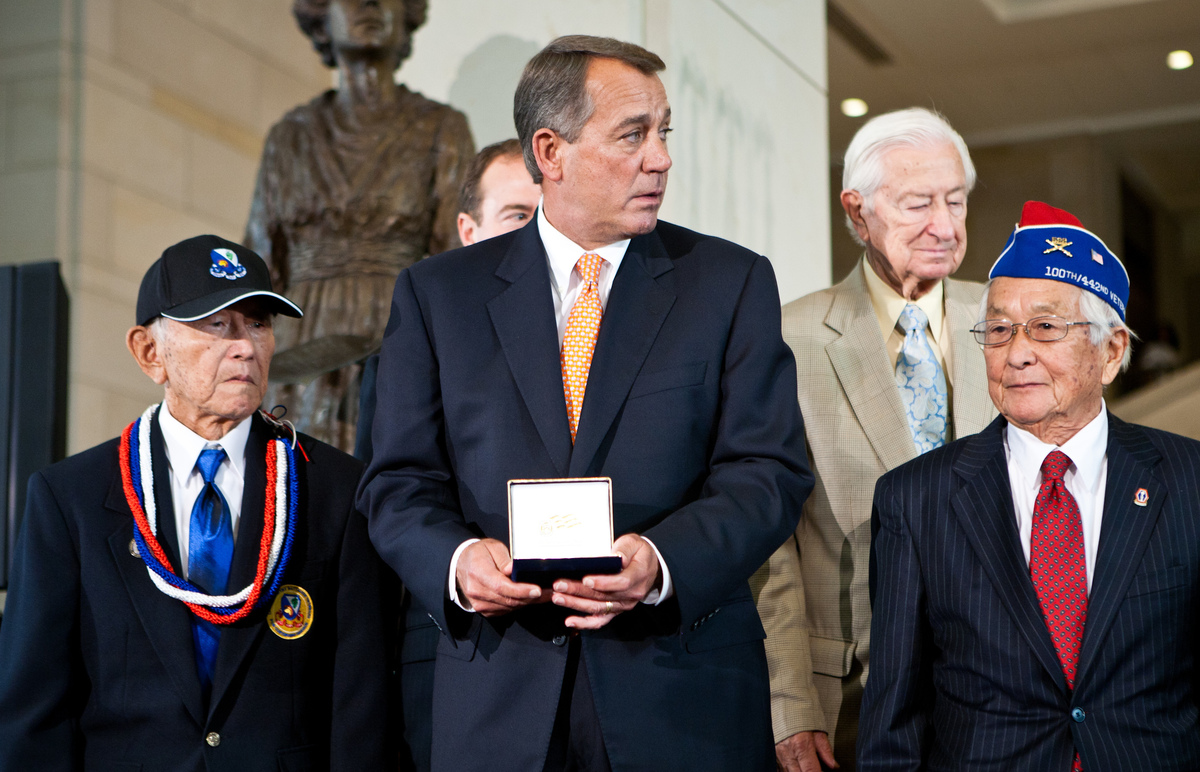 Former Speaker of the House Rep. John Boehner presents the Congressional Gold Medal to Susumu Ito of the 442nd Regimental Combat Team, an Army unit comprised of Japanese Americans from Hawaii which became the most decorated unit for its size and service.

Statehood efforts accelerated again following the war, but not without new political and racial roadblocks.

In the mid-1950s, Hawaii shifted from being Republican to largely Democratic, which prompted Democrats to increase their push for statehood efforts for both Hawaii and Alaska, another Democratic territory, hoping to boost influence in the Senate by four votes.

"The profile of Hawaii racially and culturally was a threat to the rigid patterns of race relations in the American South and to the southern way of life, which was a euphemism, of course, for protecting segregation," Bell describes.

Some senators were transparent about their motivations in keeping the prospective state out of the union. 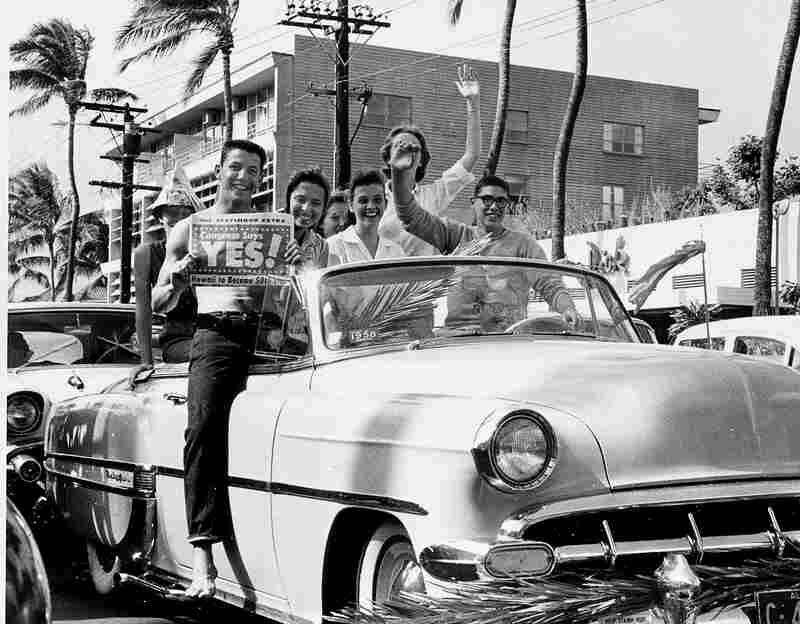 A group of supporters of statehood drive through the street in Waikiki, Honolulu, Hawaii, on March 13, 1959. ASSOCIATED PRESS hide caption 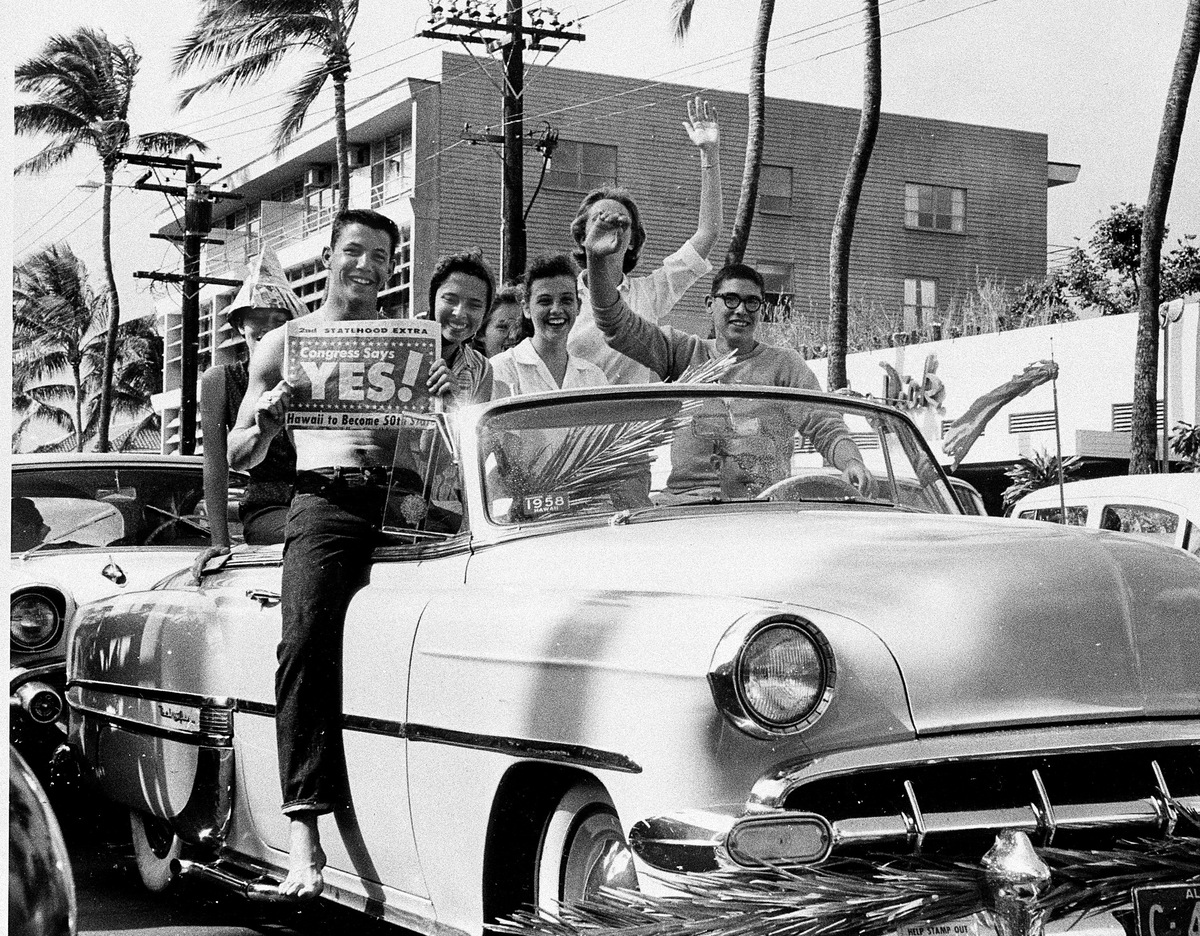 A group of supporters of statehood drive through the street in Waikiki, Honolulu, Hawaii, on March 13, 1959.

Efforts stalled, which frustrated then-President Harry Truman, who observed privately that many southerners "still have that antebellum pro-slavery outlook."

"The main difficulty with the South is that they are living eighty years behind the times and the sooner they come out of it, the better it will be for the country and themselves," he wrote in a 1948 letter.

Seven months before it would officially become a state, the Republican County Committee in Hawaii sent petitions to Congress for statehood.

"Our people have willingly and patriotically accepted and complied with any and all national requests, mandates or patriotic obligations required from all American citizens; be it in peace, or in war," it reminded Congress. 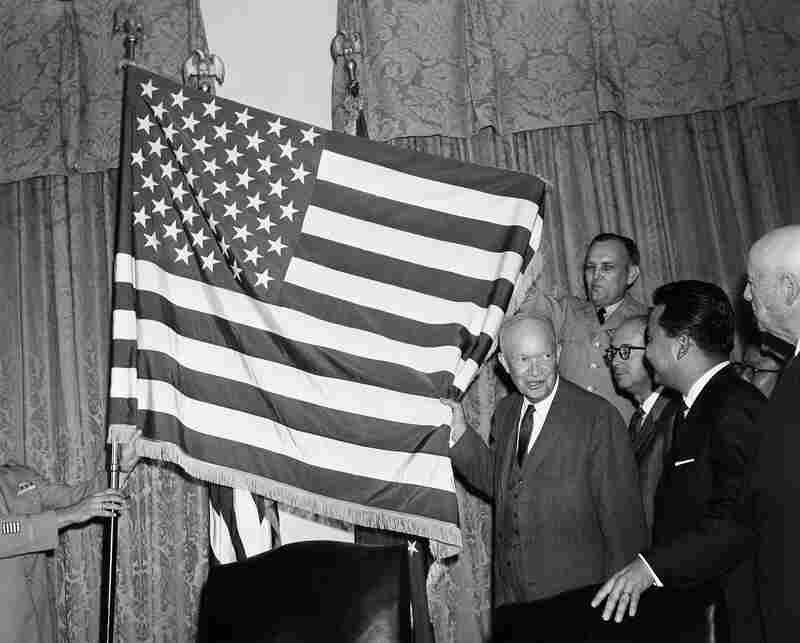 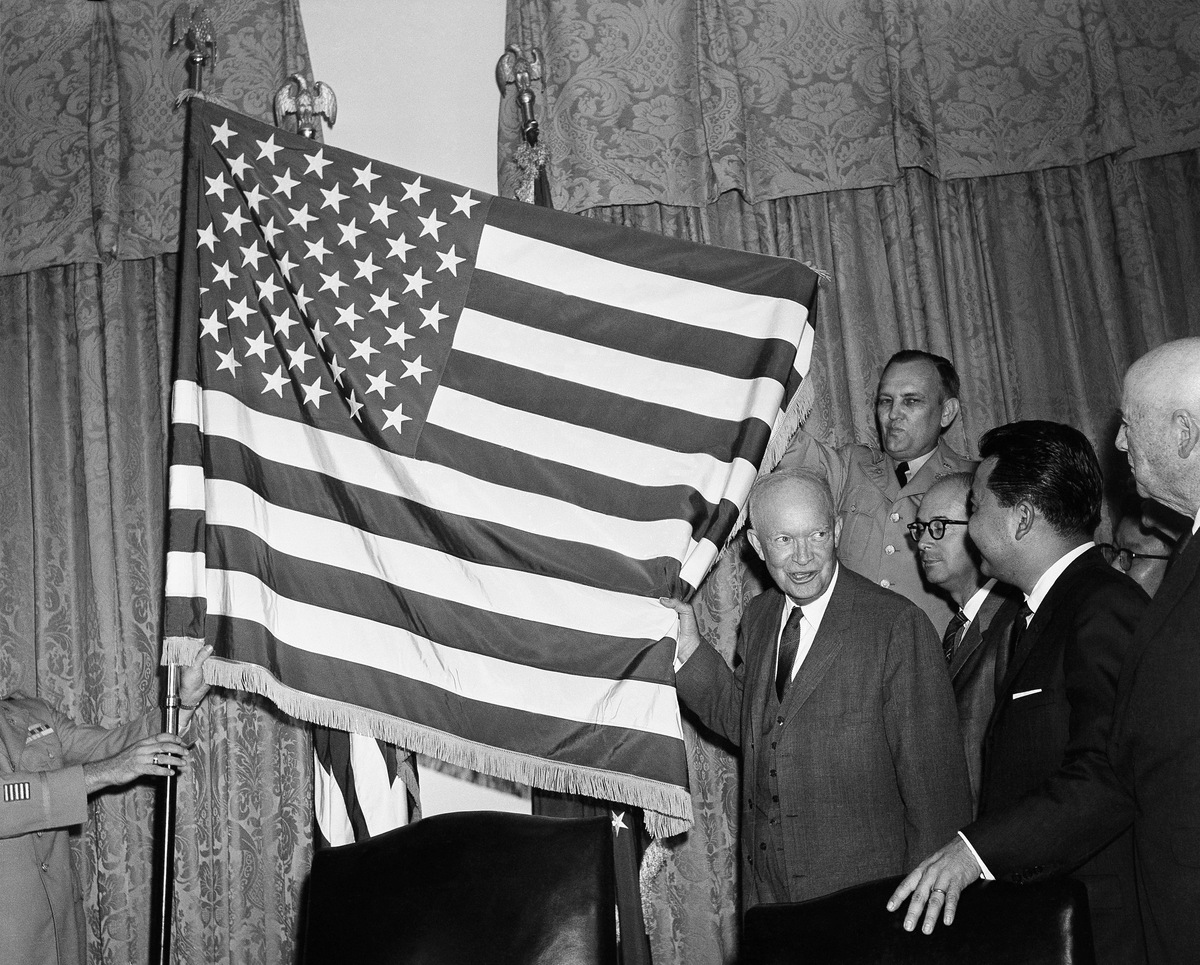 President Dwight Eisenhower helps unfurl the new 50-star flag on Aug. 21, 1959 after signing a proclamation making Hawaii the 50th state of the union. At right is Daniel K. Inouye, Democratic congressman-elect from Hawaii.

It wasn't until 1993 that the "Apology Resolution" passed in Congress, which "apologizes to Natives Hawaiians ... for the overthrow of the Kingdom of Hawaii ... and the deprivation of the rights of native Hawaiians to self-determination."

Before the Civil War, two states were generally admitted to the union at the same time in order to prevent one party, and thereby the divided north and south, from gaining a political advantage.

Following the Civil War, the dominant Republican Party looked westward to seize land and break it into states they believed would be Republican.

In what Frymer describes as one of the "biggest hang-ups at the end of the 19th century," the last two states on the continent – New Mexico and Arizona – vied for statehood.

"Arizona was always settled by more whites than New Mexico was," Frymer explains. "They both pushed for statehood, but there was more support for Arizona. And here you see both partisan politics, with two parties fighting over what would constitute a state, and then racial politics."

Much of the statehood debate over New Mexico, which had joined the U.S. as a territory in 1850, hinged on race.

Republican Sen. Lot Morril of Maine went so far as to call New Mexico's residents "Indians — the men that we hunt when we have nothing else to do in the summer season."

Statehood for New Mexico failed to pass until 1912, when Congress felt satisfied the population was "American" enough.

Will there ever be more stars on the flag?

Puerto Rico's governor's race in November may bring with it a renewed effort to embrace statehood efforts. Former congressional representative Pedro Pierluisi defeated Gov. Wanda Vázquez in the primary election and is a supporter of statehood.

This summer, the House of Representatives cast a historic vote to grant statehood to D.C, whose residents overwhelmingly support admission as a state.

But strong Republican opposition in Congress and the White House dooms any movement on that legislation.

Senate Majority Leader Mitch McConnell, R-Ky., told TV host Laura Ingraham last year that any Democratic push for D.C. statehood is "full-bore socialism on the march in the House," a comment that critics felt hearkened back to justifications for keeping Hawaii out of the union.

President Trump has been even more explicit about his reasons for opposing D.C. statehood, telling The New York Post: "Why? So we can have two more Democratic — Democrat senators and five more congressmen? No, thank you. That'll never happen."

A day before the House passed the legislation, Sen. Tom Cotton, R-Arkansas, issued a speech on the Senate floor categorizing statehood efforts as a power grab by Democrats and seemingly dismissing the value of District residents.

His comments prompted outrage on social media, with many pointing out the civil rights implications of the district's lack of representation. The city has been majority-minority since the 1950s and of its over 705,000 residents, 46% are Black.

But Rep. Andy Harris, R-Md., says he views the push for statehood as purely political.

"If your interest is solely to be able to vote for representatives in Congress, you could have retrocession occur," he says, referencing small efforts in recent years to cede the city's land back to Maryland, a plan that would not change the number of senators.

"I think the most telling political thing is that when the retrocession bill to Maryland was introduced 10 years ago in Congress, no Democrats co-sponsored it, which belies the fact that the goal is a political goal, because if the goal was just representation then retrocession to Maryland would work," Harris says.

Harris says even if Democrats win back the Senate and the White House this November, D.C. statehood is far from guaranteed.

It's the kind of opposition Sen. Hirono expects.

"I think there will be a lot of Republican resistance to having any state that will create more seats that would go Democratic," she says. "Especially now in this much divided political environment."

Frymer, of Princeton, says if the tables were turned, and D.C. was a Republican stronghold, it's unlikely the Democratic party would be rushing to grant statehood.

"No party wants one state to come in that's going to boost the other party. That's why historically, both parties have looked for some type of balance," he says.

"To me, this is one of those issues that historically will be resolved. The pressure is going to continue to build and build over time. The question is, when will the moment occur that the United States finally embraces it?"