Accessibility links
'Tesla' Review: Daring Film Captures The Spirit Of An Unorthodox Inventor Ethan Hawke plays the famed Serbian American inventor in a new film that reminds us what a modern creature Tesla was — a figure from the past who never stopped pointing the way to the future. 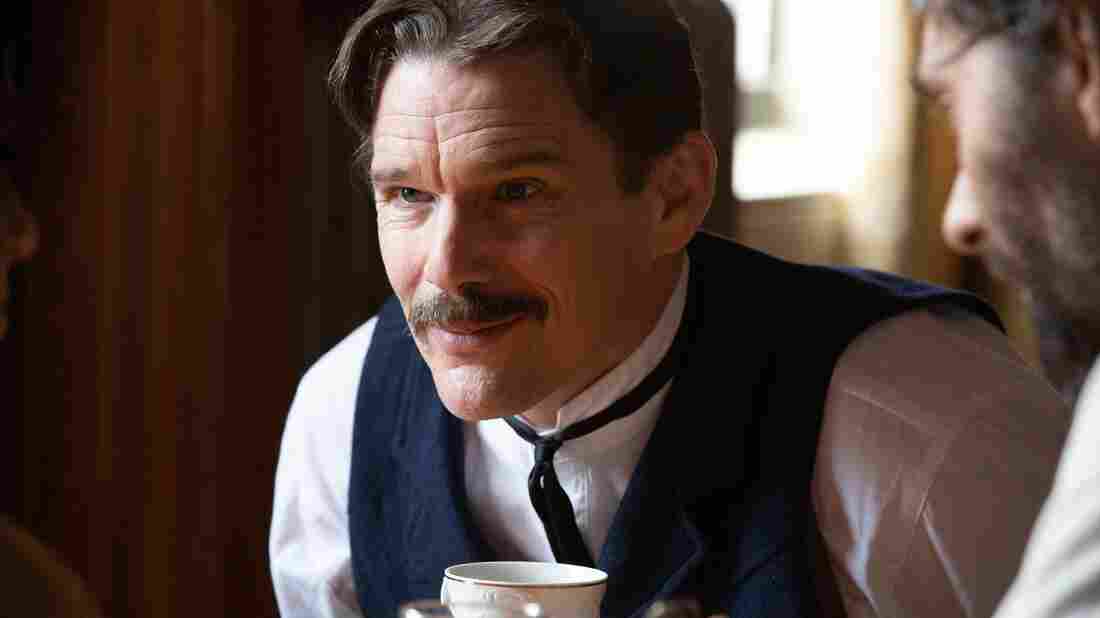 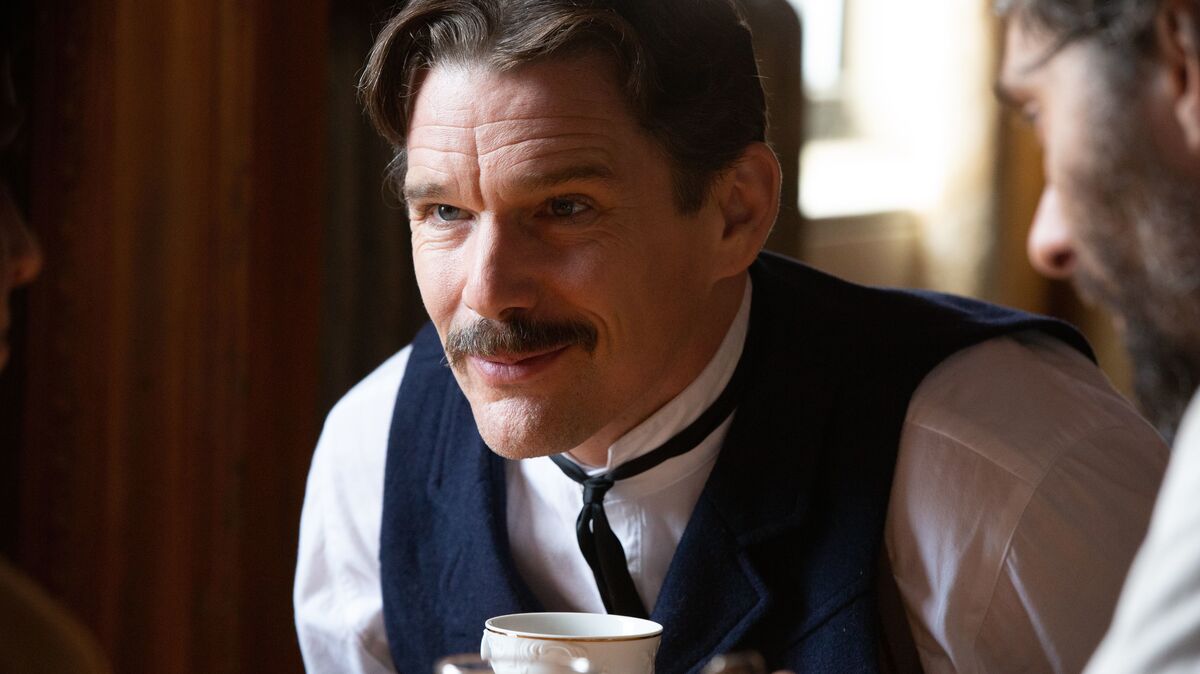 The writer and director Michael Almereyda is making some of the most thoughtful and inventive biographical dramas of any filmmaker working today.

He's fascinated by the lives of scientists and intellectuals, but rather than merely rattling off their accomplishments, he uses the medium of cinema itself to explore how their minds actually worked. A few years ago he directed Experimenter, a portrait of the controversial researcher Stanley Milgram that played its own sly psychological games with the audience.

Almereyda's new film, Tesla, is a quieter, moodier affair than Experimenter, but it has the same invigorating playfulness. It unfolds as a series of funny-sad vignettes from the life of Nikola Tesla, the Serbian-American inventor who has often been relegated to a historical footnote — as the younger, hipper rival to Thomas Edison. But Tesla, played here by a superb Ethan Hawke, looms ever larger these days in the public imagination. He's been a character in novels, video games and quite a few movies, like The Current War and The Prestige, in which he was played by none other than David Bowie.

Tesla doesn't follow the usual cradle-to-the-grave biopic trajectory. There are oddball comic asides, like the scene where Tesla and Edison attack each other with ice-cream cones; needless-to-say, the movie tells us, that didn't really happen. Sometimes a narrator interrupts the action to run Google searches on the characters, a nifty little fact-checking device that also underscores the story's relevance. It connects Tesla, a pioneer in the field of wireless communications, directly to the internet technology we use today.

Aside from the occasional leaps forward and backward, the movie is told in mostly chronological order. It begins in the 1880s, not long after Tesla, who was born in what is now Croatia, has emigrated to New York City. There, he gets a job working for Edison, played with snappish wit and a rich vein of melancholy by Kyle MacLachlan.

Tesla is developing a new project, a motor that uses alternating current — a more efficient system of harnessing electrical power than Edison's direct-current method. Edison feels threatened and refuses to support Tesla's work, as the younger man bitterly notes in a letter to a friend.

Edison is just one of many powerful older men with whom Tesla will cross paths over the course of his tumultuous career. Jim Gaffigan gives an enjoyably big-hearted performance as the engineer and entrepreneur George Westinghouse, who funds the Tesla motor and makes it a force to be reckoned with.

Later, Tesla finds a chillier patron in the banker J.P. Morgan, who gives him the modern-day equivalent of $4 million to build a wireless communications system, only to balk when the project leads Tesla into ever more bizarre realms of study. At one point, Tesla comes to believe he might be receiving secret transmissions from Mars.

Hawke, who starred in Almereyda's offbeat Shakespeare adaptations Hamlet and Cymbeline, gives a beautifully internalized performance as Tesla. He nails the essence of a deep thinker who likes his solitude and who's more comfortable at home with his notebooks than he is out and about in society.

The movie does hand a prominent role to Anne Morgan, J.P. Morgan's daughter, memorably played by Eve Hewson. She becomes a close friend of Tesla's as well as a kind of stand-in for the audience. Through her tender yet sharply perceptive gaze, we come to appreciate this man's genius, but we also register the pride and short-sightedness that will again and again prove to be his undoing.

Tesla has been a long time in the making. Almereyda wrote the script decades earlier, but it languished for years until the financing at last came together. Watching the finished movie, I couldn't help but feel that Almereyda empathizes instinctively with Tesla. Not because the director sees himself as some sort of fellow visionary, but because he knows that in science as well as in filmmaking, bold thinkers often run afoul of naysaying benefactors.

Tesla is a deeply unconventional movie, but never in a self-congratulatory way. The gifted cinematographer Sean Price Williams gives the interiors a rich amber glow, cast initially by candles and later by electric bulbs: A world that might have seemed stiff and static is instead wildly in flux. The movie is a hypnotic experience. You might be thrown by some of the weirder touches, like the wildly anachronistic scene in which Tesla stands in front of a microphone and sings a 1985 British pop hit, but I loved its crazy daring. It reminds us what a modern creature Tesla was, a figure from the past who never stopped pointing the way to the future.