Accessibility links
Louis DeJoy Vows USPS Can Handle Mail-In Ballots The postmaster general committed to delivering the nation's election mail securely, at his first public remarks since stopping the operational changes he instituted this summer at the Postal Service. 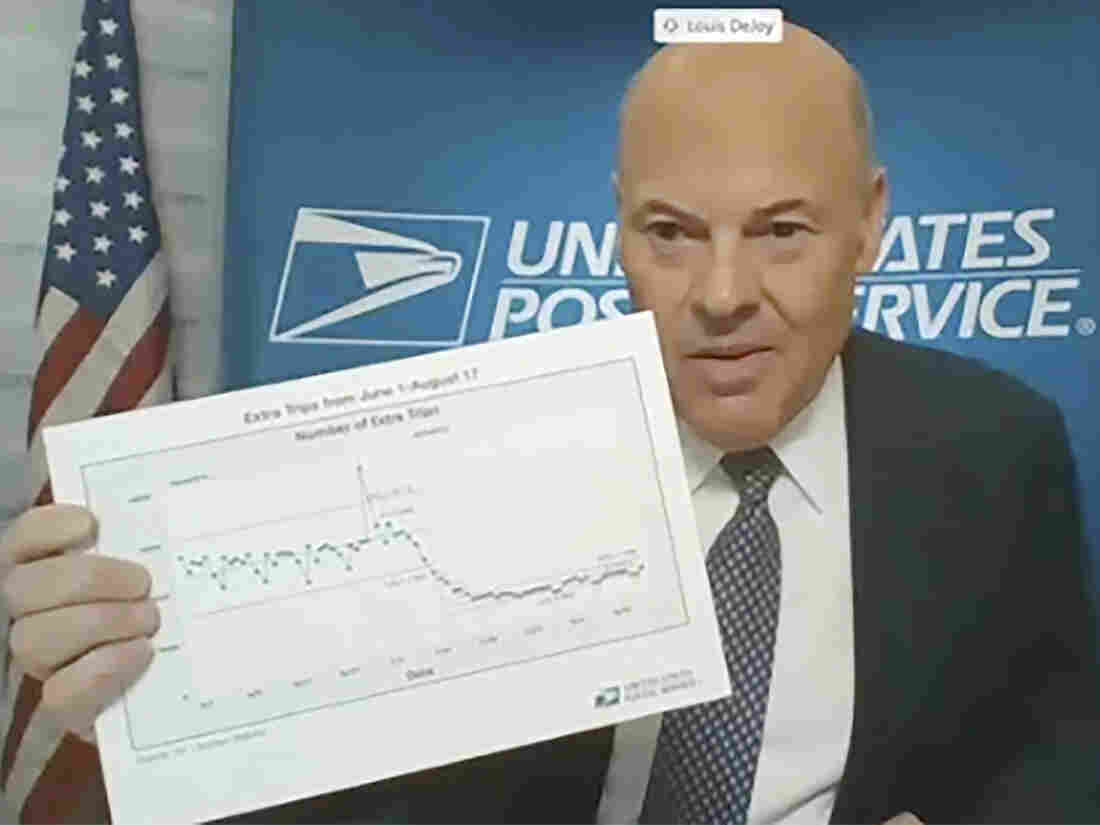 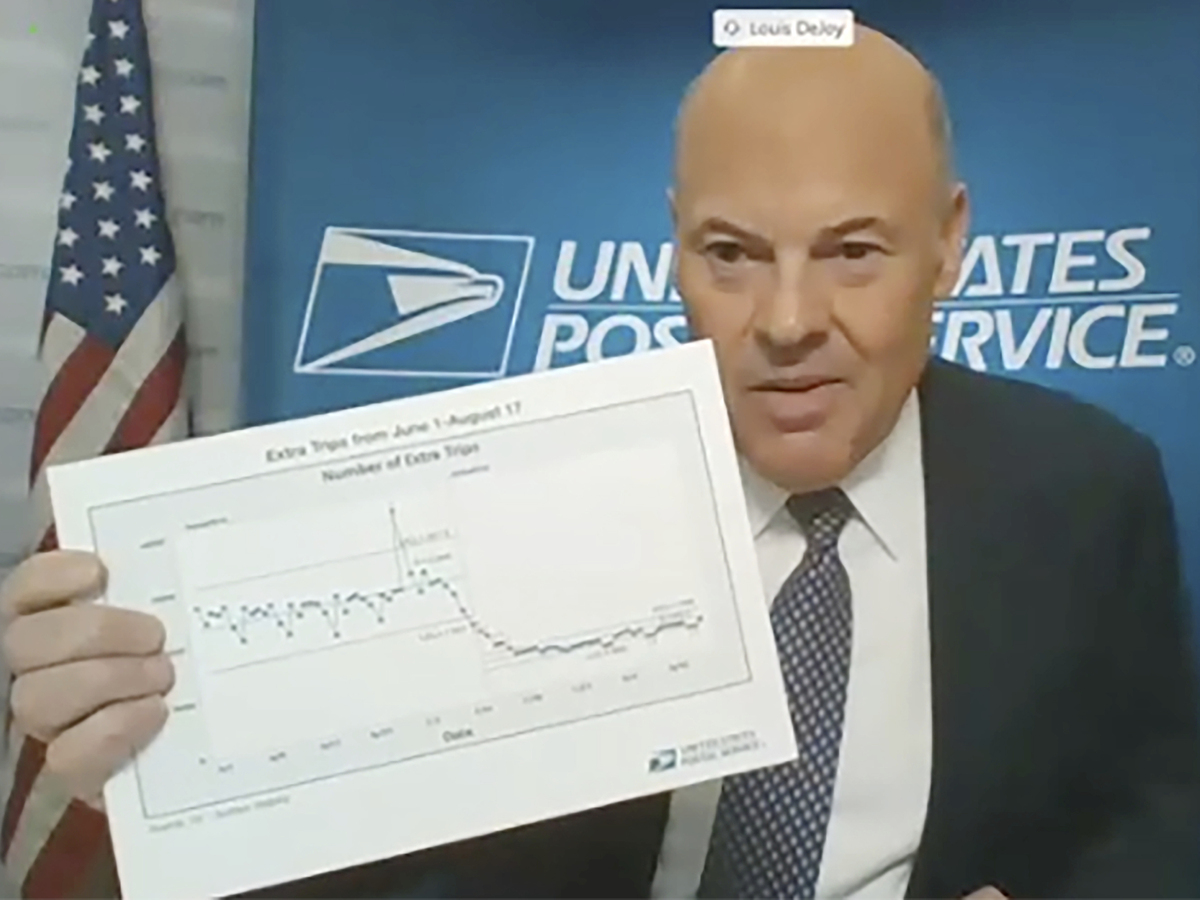 Postmaster General Louis DeJoy testifies Friday during Friday's virtual hearing before the Senate Governmental Affairs Committee about the U.S. Postal Service during the COVID-19 pandemic and the upcoming elections.

Postmaster General Louis DeJoy defended his leadership of the Postal Service on Friday and sought to reassure senators that his agency would be able to deliver the nation's election mail "securely and on time," calling it a "sacred duty."

"There has been no changes in any policies with regard to the election mail for the 2020 election," he said.

The hearing marked DeJoy's first public remarks since walking back his plan for operational changes, which drew heavy criticism. He pushed back on suggestions that these changes had political motivations.

"Trying to have any negative impact on the election is an outrageous claim," he said.

All the same, DeJoy said the Postal Service's mandate to provide reliable postal service to the public is at "fundamental risk" because of its long-term financial losses and called on Congress to provide his agency with relief.

"Changes must be made to ensure our sustainability for the years and decades ahead," he said.

Sen. Gary Peters, D-Mich., ranking member on the Senate Homeland Security and Government Affairs Committee, asked DeJoy whether he had discussed any of the changes he made since he assumed his post in June with the Trump campaign of any Trump administration officials.

DeJoy said no: "I have never spoken to the president about the Postal Service, other than to congratulate me when I accepted the position."

The U.S. Postal Service has suffered from financial problems for years, but DeJoy, a Republican fundraiser, chose this summer to cut some overtime, withdraw sorting machines and impose other operational changes that have effectively reduced the system's throughput.

Democrats charged that was part of a scheme by President Trump to sabotage the transit of ballots this year following weeks of sustained criticism by Trump of voting by mail — even though that's how the president votes.

DeJoy rejected that out of hand and said he, too, votes by mail and plans to do so again this year.

Critics have more broadly complained of mail delays and the removal of mail collection boxes. Some of the work is routine, the postmaster general said, and has been part of postal operations for years.

DeJoy testified that since his installation at the agency, the Postal Service removed 700 mail collection boxes and added, "I had no idea that was a process."

"When I found out about it, we socialized here with the leadership team and looked at ... the excitement it was creating so I decided to stop it. And we'll pick it up after the election, but this is a normal process that has been around for 50 years."

Sen. Rob Portman, R-Ohio, said he had heard about mail delays from veterans awaiting their medication.

DeJoy responded that the agency is working "feverishly" to increase the efficiency of deliveries and said he feels "bad about the dip in our service."

"So many of our service members, veterans, people who experience disabilities and rural Americans, their local post office is their lifeline. And I'll note that the change in volume you are seeing doesn't change the need for timely delivery of the essential necessary items that the American public relies on the Post Office for," Hassan said.

The bottom line on Friday, however, was that the postmaster general assured senators the mail would go through as intended, especially in support of the election.

Sen. Mitt Romney, R-Utah., asked whether DeJoy was confident that mail-in ballots would be received if people vote within seven days of the election.

"Extremely highly confident," DeJoy responded. "We will scour every, every plant ... each night leading up to Election Day; very, very confident." 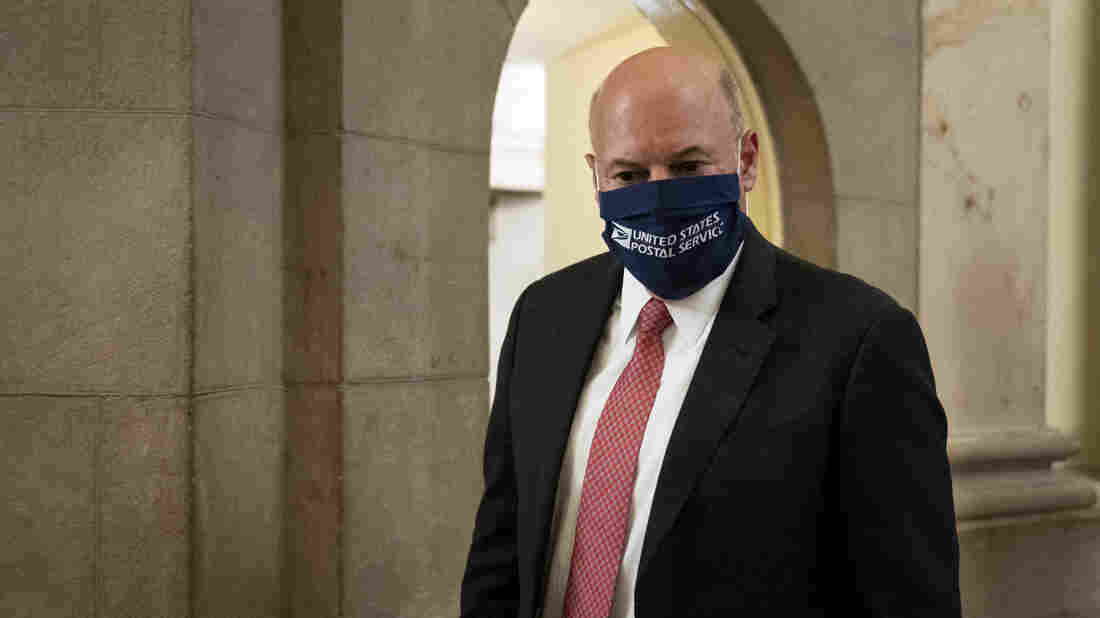 Democrats say they want Postmaster General Louis DeJoy not only to halt the changes made this summer but also to work to reverse them. Caroline Brehman/CQ-Roll Call Inc. via Getty Images hide caption 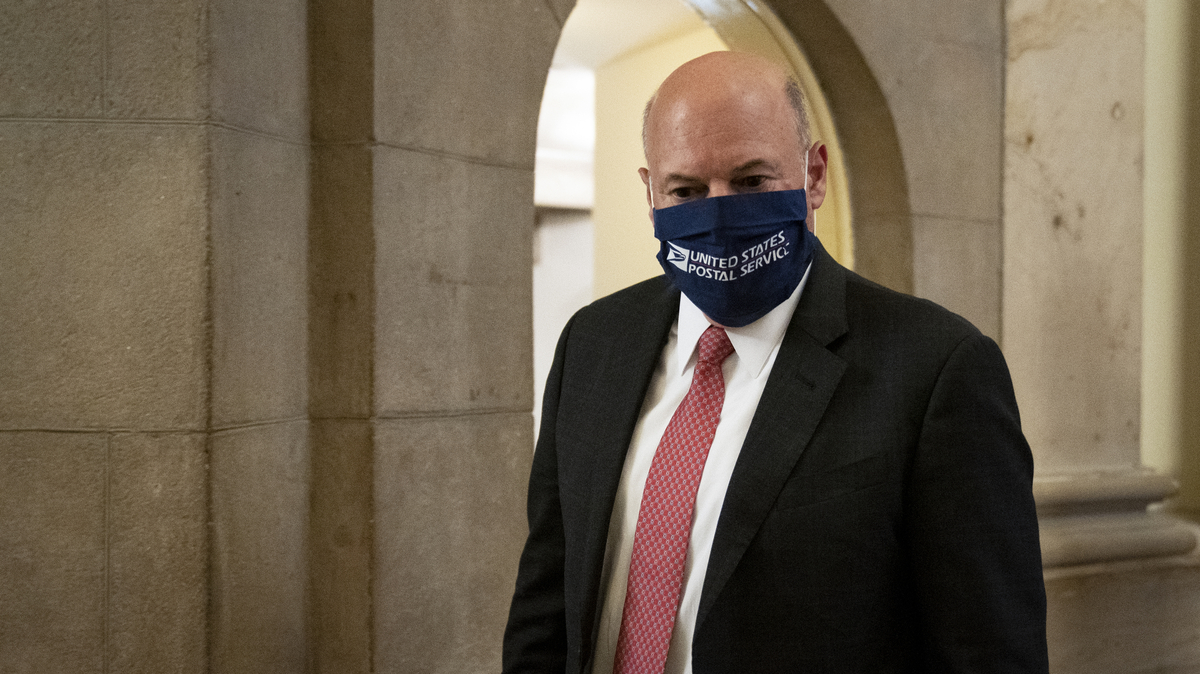 Democrats say they want Postmaster General Louis DeJoy not only to halt the changes made this summer but also to work to reverse them.

USPS not immune from COVID-19

DeJoy said that in addition to procedural changes that he ordered within the Postal Service, delays also have resulted from problems with the coronavirus — worse in some areas suffering more.

"Employee availability average has dropped across the nation about 4%, but when you can go into some of these what I would say hot spots — Philadelphia, Detroit — there as much as 20-25%. Philadelphia has 750 routes and we have days where we're short 200 carriers and this can go on for a while," he said.

DeJoy also described the dispatch schedule for mail delivery trucks, implying that delays in getting mail onto the trucks is a temporary adjustment.

"This whole thing is an aligned schedule in theory, on paper — and we know there's lots of imbalances that we're finding as we went through this process," he said, adding that he expects mail delivery efficiency to increase to 97% on-time.

DeJoy's "transformative" overhaul, as he called it, involved cutting overtime for mail carriers, and according to The Washington Post, removing hundreds of mail sorting sorting machines.

It was made in the name of saving money: The USPS lost $9 billion last year and could lose $11 billion this year, DeJoy said earlier this month. But the changes led to almost immediate reports of mail delays and frustration from postal worker unions and accusations from Democrats of voter suppression and election sabotage.

"Mail is beginning to pile up in our offices, and we're seeing equipment being removed," said Kimberly Karol, president of the Iowa Postal Workers Union, in an NPR interview last week. "So we are beginning to see the impact of those changes."

Worries were already bubbling about how the changes would affect November's election, when more than half of all ballots cast are expected to be returned or delivered through the mail.

And Trump exacerbated those fears, when in a press conference and subsequent interview, he tied Postal Service funding to his hope about hampering mail-in voting expansions nationwide during the pandemic.

In response to the bipartisan backlash to those comments, DeJoy changed course and announced that his organizational changes would wait until after the election.

Democrats have made it clear they are still not satisfied, with House Speaker Nancy Pelosi calling the statement "wholly insufficient" and "misleading."

In particular, Democrats say they want DeJoy not only to halt the changes, but also to work to reverse them and replace equipment that was removed, for instance.

Some of Trump's allies have scoffed at the flap over the Postal Service.

Chairman Ron Johnson, R-Wis., who convened Friday's hearing, said, "I have no doubt the Democrats are ginning these issues and these problems up into something that's it's not ... it's a false narrative designed to extract an advantage."

And in a note to lawmakers this week, House Minority Whip Steve Scalise, R-La., dubbed Democrats' proposed bill to aid the Postal Service a "conspiracy theory act" and said there is no true urgent problem with the mail system.

"This bill is nothing but an attempt to fabricate a postal crisis for political purposes, while wasting taxpayer funds that aren't needed in order to appease unions and trial lawyers," Scalise wrote.

The legislation is scheduled for a vote on Saturday and is expected to pass in the House but not become law over opposition in the Republican-led Senate.

In an interview with NPR's Steve Inskeep, Sen. James Lankford, R-Okla., pushed back on claims that there have been large mail delays.

Republicans control the Senate committee before which DeJoy appeared on Friday. Democrats control a House panel before which he is scheduled to appear on Monday.