Accessibility links
Voting In Person May Be Less Risky Than Previously Thought The report concludes Wisconsin voters who braved the pandemic and went to the polls in April did not see a surge in COVID-19 infections, although another study reaches the opposite conclusion. 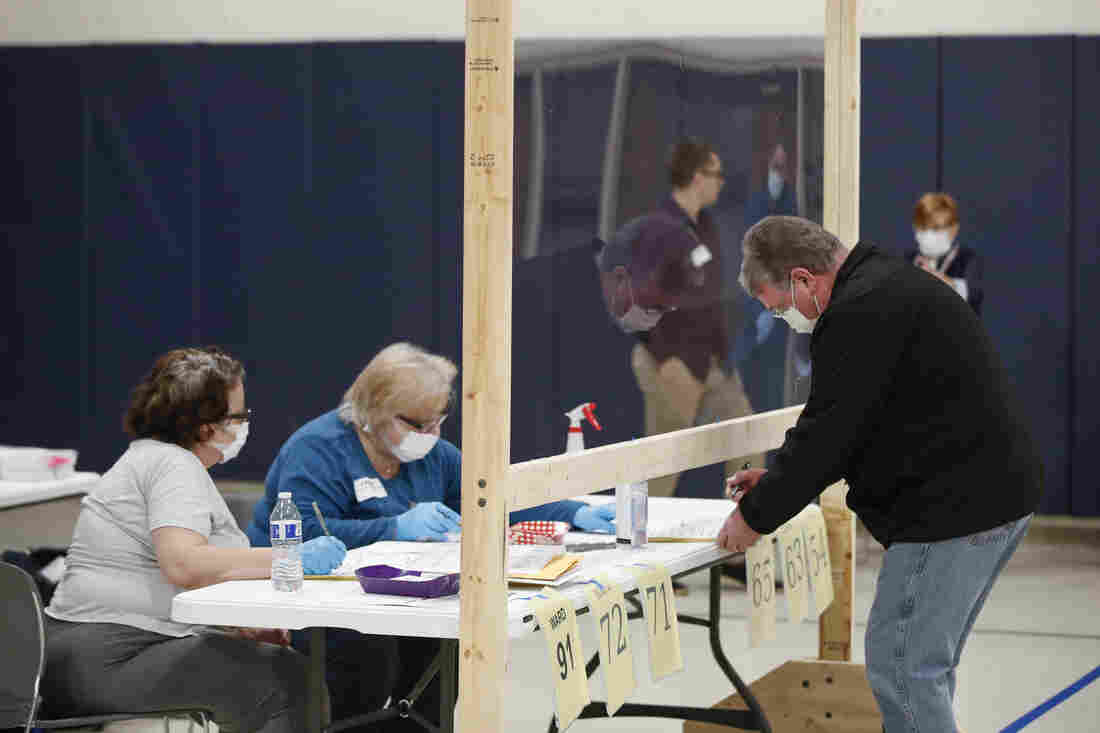 A man checks to cast his ballot in Kenosha, Wis., on April 7. A new study suggests that in-person voting in that Wisconsin primary did not produce a surge of new coronavirus cases. Kamil Krzaczynski /AFP via Getty Images hide caption 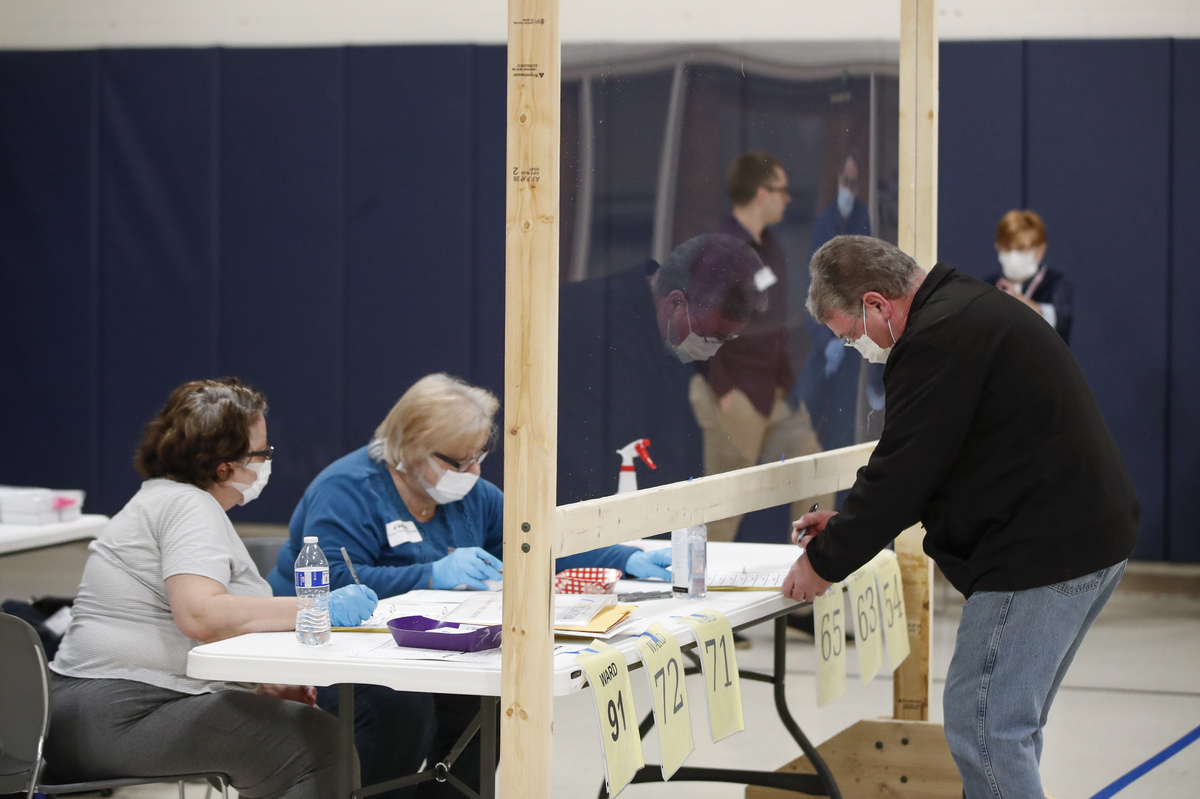 A man checks to cast his ballot in Kenosha, Wis., on April 7. A new study suggests that in-person voting in that Wisconsin primary did not produce a surge of new coronavirus cases.

Amid widespread alarm about the ability of the embattled U.S. Postal Service to deliver mailed election ballots on time, pandemic-wary voters are now being told that in-person voting this fall may not be as risky as initially thought.

"We've got to vote early, in person if we can," former first lady Michelle Obama declared during a Democratic National Convention speech on Monday. "We have got to grab our comfortable shoes, put on our masks, pack a brown bag dinner and maybe breakfast, too, because we've got to be willing to stand in line all night if we have to."

Four days earlier, the nation's most prominent expert on infectious diseases had been asked whether people can safely go to polling places and vote in person.

"I think if carefully done, according to the guidelines, there's no reason that I can see why that not be the case," Dr. Anthony Fauci said in an interview with National Geographic.

"I mean, obviously if you're a person who is compromised physically or otherwise, you don't want to take the chance," the director of the National Institute of Allergy and Infectious Diseases added. "There's the situation of mail-in voting that has been done for years in many places. So there's no reason why we shouldn't be able to vote in person or otherwise."

It's a fraught issue with political implications. President Trump and his campaign have fought the massive pandemic-induced expansion of voting by mail around the country, frequently making false claims about mail-in voting.

With the pandemic striking in an election year, officials are now making social distancing, barriers between voters and poll workers, protective gear for poll workers and abundant cleaning products on hand part of the standard operating procedure for in-person voting.

Drive-Through Voting? Texas Gets Creative In Its Scramble For Polling Places

Some localities are struggling to find suitable polling place locations and are considering drive-through bank tellers and parking garages as substitutes for high school gyms and community centers. In some cities, professional sports teams are offering up their facilities to provide polling sites with ample social distancing.

Still, new research suggests in-person voting may be less risky than many fear.

A peer-reviewed study published in the August issue of the American Journal of Public Health concludes that in-person voting in Wisconsin's April 7 election by more than 400,000 electors did not produce a detectable surge there in coronavirus cases.

In that report, researchers from Stanford University's Graduate School of Business and the University of Hong Kong's School of Public Health call the Wisconsin election "a large natural experiment" for better understanding the coronavirus transmission risk.

The team found that hospitalizations in Wisconsin for COVID-19 cases "steadily declined throughout April," dropping from a high of 101 on April 3 — four days before the election — to a low of 14 on April 18, according to data from the Wisconsin Department of Health Services.

There were 71 people, that agency reported in mid-May, who did test positive for the coronavirus who had either been poll workers or voted in person in Wisconsin's balloting.

But the study noted that many of those cases involved people who had been exposed to the coronavirus in situations unrelated to voting. Even if they had been infected at voting places, the authors said, the number of cases relative to the overall number of in-person voters suggests that such voting involved a "fatality risk of driving an automobile approximately 140 miles."

"Taken together," the study concluded, "it appears that voting in Wisconsin on April 7 was a low-risk activity."

A May 11 study that was not peer-reviewed, however, reached a different conclusion about the risk Wisconsin voters faced on April 7.

"Across all models we see a large increase in COVID-19 cases in the weeks following the election in counties that had more in-person votes per voting location, all else equal," a team of economists from the University of Wisconsin-Oshkosh and Ball State University wrote. "Furthermore, we find a consistent negative relationship between absentee voting and the rate of positive COVID- 19 tests."

The researchers added, "Given these results, it may be prudent, to the extent possible, that policy makers and election clerks take steps to either expand the number of polling locations or encourage absentee voting for future elections held during the COVID-19 pandemic."

And while poll workers in Wisconsin wore latex gloves and surgical masks in voting places marked with tape and signs for social distancing, the voters were not required to don masks.

There will be not be any such requirement in Wisconsin as well on Nov. 3.

"Can voters be required to wear ... face coverings at their polling place?" a voting guide published online by the Wisconsin Elections Commission asks. "No, face coverings can be strongly encouraged but not required."

That advice echoes guidelines for voting issued in June by the Centers for Disease Control and Prevention in which poll workers were simply told to "encourage" voters to use masks.