Accessibility links
Shedding Big Hats And Hoopla, Democrats Find Love Online Thanks to swift pacing and high production values, viewers got a compact and highly watchable two hours of political messaging each night. It was, in fact, remarkably slick. 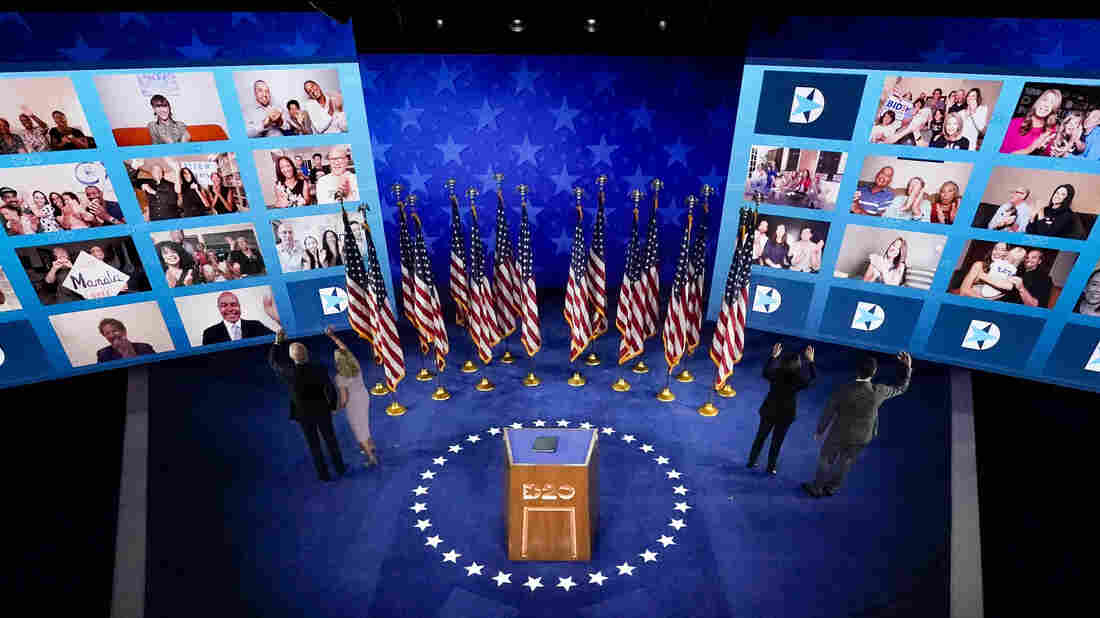 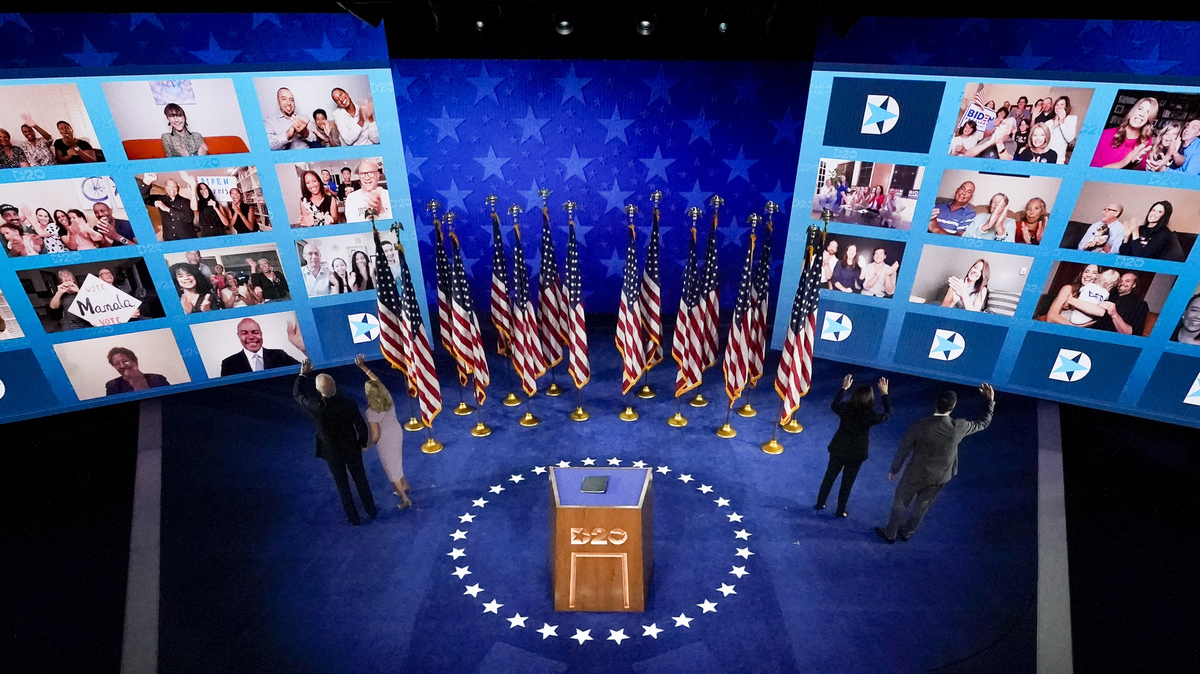 It turns out going virtual has its virtues.

Just ask the Democrats, grinning and basking after their first-ever online national convention this week.

No one knew what to expect, and there were plenty of doubters looking for glitches, flubbed cues and dead air — not to mention lots of dull and boring segments. Most significantly, we feared all involved would miss the sense of history being made in real time.

But the week turned into a pleasant surprise. While far from flawless, the four nights were in their way as effective as the traditional conventions, if not more so. And they may just have done the party and its ticket as much good as a traditional in-person convention would have in this pandemic moment — if not more.

For the delegates who would have been physically present in the Fiserv Forum in Milwaukee, the lost opportunity was irreplaceable. Ditto for the disappointed civic leaders and citizens of that city, who have never hosted a convention and wanted the chance to shine (and the boost for local business). Here's a thought: The Democratic National Committee should skip the site search in 2024 and award the next in-person convention to Milwaukee.

But for the vastly larger audience that would always have seen the convention on a screen at home, this was a more than acceptable substitute. It probably means we will see more reliance on virtual elements in future conventions, as well.

To be sure, the virtual event lacked the scale and energy participants and viewers would get from a vast and boisterous crowd. At certain moments of rhetorical flourish, you waited for the cheering that was conspicuous by its absence. Crowd reaction at a convention is a cue to audiences everywhere, much like a laugh track for a TV sitcom.

But thanks to swift pacing and high production values, viewers got a compact and highly watchable two hours of political messaging each night. It was, in fact, remarkably slick.

Each night's program was hosted by a well-known Hollywood personality such as Eva Longoria on the first night and Julia Louis-Dreyfus on the fourth. That may have been too much glitz for some, and it gave Ronna McDaniel, the Republican National Committee chair, an opening to say her party's convention next week will feature "real people."

But the Democrats' week had quite a few regular folks as well. Instead of hearing delegation chairs bellowing the virtues of their "great state of" wherever, we got a video montage of the country with a dizzying variety of delegate participants. It was virtually fun.

Another real person who left an impression was Kristin Urquiza, who spoke on the first night about her father dying of COVID-19 after going to a karaoke bar. ("His only pre-existing condition was trusting Donald Trump.")

The heart-tugging winner of the week for many was the brief video made by Brayden Harrington, a 13-year-old boy who told of how Biden has helped him battle his stutter.

That video aired shortly before Biden's climactic speech on the final night. While meaningful in itself, it also served to remind the audience of Biden's own youthful struggle with stuttering. Intentional or not, that might have helped to lower the bar prior to Biden's acceptance speech. He was following a stellar lineup of previous speakers who had delivered as advertised, particularly Michelle Obama on the first night.

Some will say this event, especially Biden's part of it, succeeded by exceeding low expectations. Laura Ingraham on FOX News said Thursday night that "people were expecting him to flub every line and have a senior moment."

In this view, widely expressed, no one thought Biden's speech would be great, so when it was good it seemed great — just like the week as a whole.

But there was more to both the speech and the week than that.

There were times when the made-for-TV formatting worked especially well. Typically, convention speeches suffer from the competing demands of the camera and the live audience. The in-person crowd's roaring reaction can take on a life of its own, breaking the connection between the speaker and the viewers on screens.

But this week's closers were all directed exclusively to camera, keeping the ultimate audience uppermost in the presenter's mind.

That was just one way the limitations of the format simplified the task facing convention organizers, who did not need to mount a stage show as well as a TV production. This gave them greater control over the proceedings, unbothered by rowdy delegates or uncontrollable factors — as when hurricanes curtailed the first nights of the Republicans' conventions in 2008 and 2012.

Having a new kind of control, and pinpoint timing, allowed the show directors to orchestrate their performers to maximum effect and stick to their program. 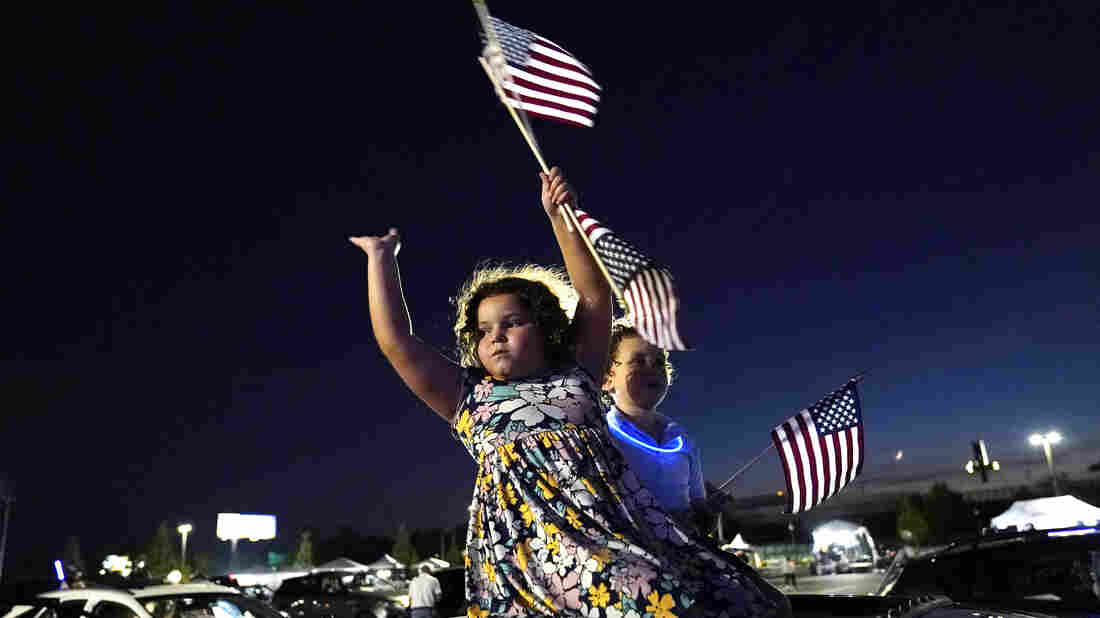 Alessandra Goldstein, 6, and her family watched Joe Biden accept the nomination Thursday night from their car outside of the Chase Center in Wilmington, Del. Carolyn Kaster/AP hide caption 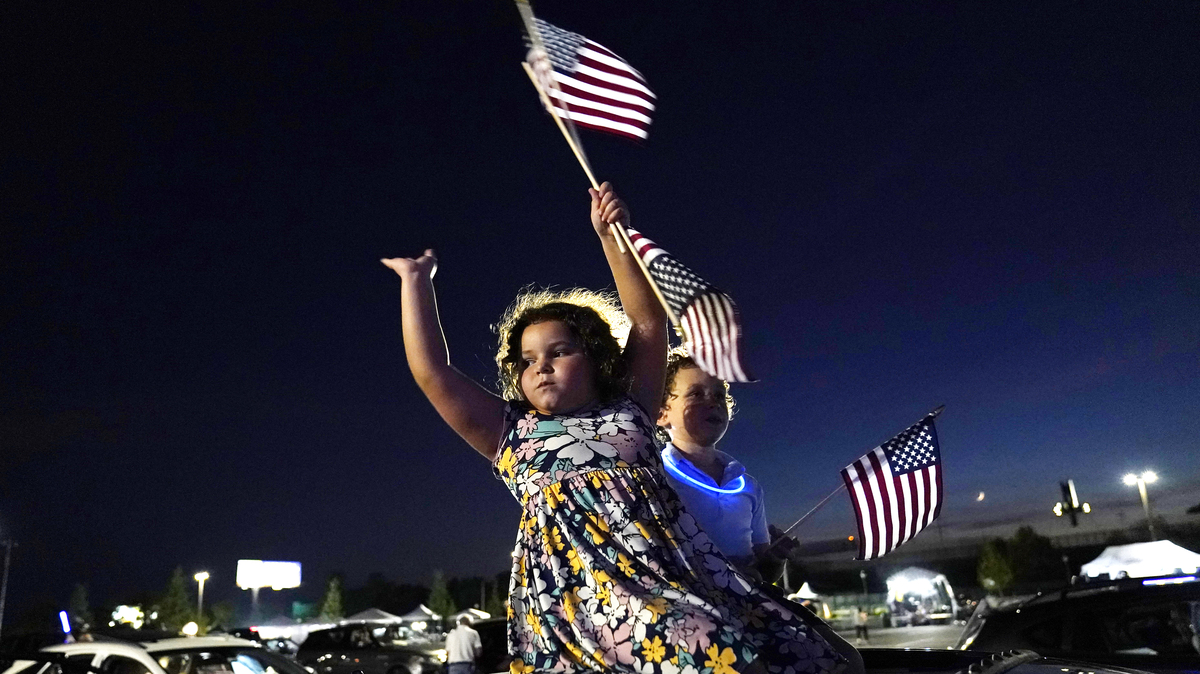 Alessandra Goldstein, 6, and her family watched Joe Biden accept the nomination Thursday night from their car outside of the Chase Center in Wilmington, Del.

Yes, we knew we were being deprived of any sense of extravaganza. The fireworks on the final night, and the honking cars in parking lots, were charming in a small-town way, although not as satisfying as the traditional closing-night mob scene and balloon drop on stage.

But were we deprived of actual history making? If so, it happened a long time ago. The national live conventions have not had a serious role in deciding the nominee since 1952, and the platform fights all happen elsewhere. All the suspense is in the primaries and caucuses that happen months earlier.

Instead, the big arena blowouts have become essentially events. They have been made-for-TV promotions that sprawl across hours of free airtime with bogus drama and goofy hoopla.

This week, under duress, they simply cut to the chase.

The week featured an unusual amount of outreach to Republicans and independents, particularly the working class. Here was John Kasich, the former governor of Ohio, praising Biden and denigrating the incumbent president of his own party. Here were Christine Todd Whitman, former governor of New Jersey, and Susan Molinari, former House member, establishment Republicans who have been appalled by Trump.

And Michael Bloomberg was given a five-minute slot on the final night. Bloomberg is the mega-billionaire who served as mayor of New York as a Republican and as an independent and bankrolled a TV-based campaign in this year's Democratic presidential primaries. It fell to Bloomberg to call Trump "a con," as he did in 2016, and to point out that more jobs were created in the last three years of Obama's presidency than in the first three years of Trump's.

The gestures to the center-right were numerous enough to evoke some grumbling from the left. But you could also sense some smoke from the peace-pipe Biden's team had shared with at least some of the party's progressives. Vermont Sen. Bernie Sanders got a featured speaking slot on the first night and a cameo on the final night in a panel of 2020 primary contenders. He returned the gesture by praising his old Senate colleague. Biden, for his part, played up the $15 minimum wage and the central role of unions ("they built the middle class in this country").

There were also vignettes of various white working-class people such as World War II veteran Ed Long who had voted for Trump in 2016 and now switched to Biden. The party was using the online format to send videogram invitations to those who had decamped — a category crucial to Trump's coalition in 2016 and 2020.

When the Democrats last managed to deny an incumbent Republican a second term, in 1992, white voters without college degrees were roughly 60% of their base. Today, such voters are only 30% of the Democratic base, according to Pew Research Center data from 2019. Much of this convention was an appeal to that demographic to return.

But that same Pew report also noted that people of color now make up 40% of all those who identify with or lean to the Democrats. That is up from less than 25% a century earlier. And the convention planners were visibly conscious of this fact as well.

Most of the top speakers, the moderators and the entertainers were African American. The ticket included the first black woman in history. A featured tribute to the late Rep. John Lewis of Georgia was a connection to Democratic conventions and sacrifices of the past.

There was not an equal amount of attention paid to Hispanic Americans, however, particularly not in terms of headline speakers. Rep. Alexandria Ocasio-Cortez, the sensational newcomer from New York, got only a minute as a nominating second for Sanders.

Hispanics are now the largest minority group in the country, and most have been voting Democratic. This was noted by, among others, former Obama Cabinet member Julian Castro, a candidate himself in the early going of this presidential cycle.

The perceived slight to Ocasio-Cortez, 30, seemed an unforced error on the part of convention organizers, particularly because her age group in general had little profile in the programming. When the singer-songwriter Billie Eillish was featured one night, the 18-year-old first-time voter stood out in large part because Gen Z was so little represented. 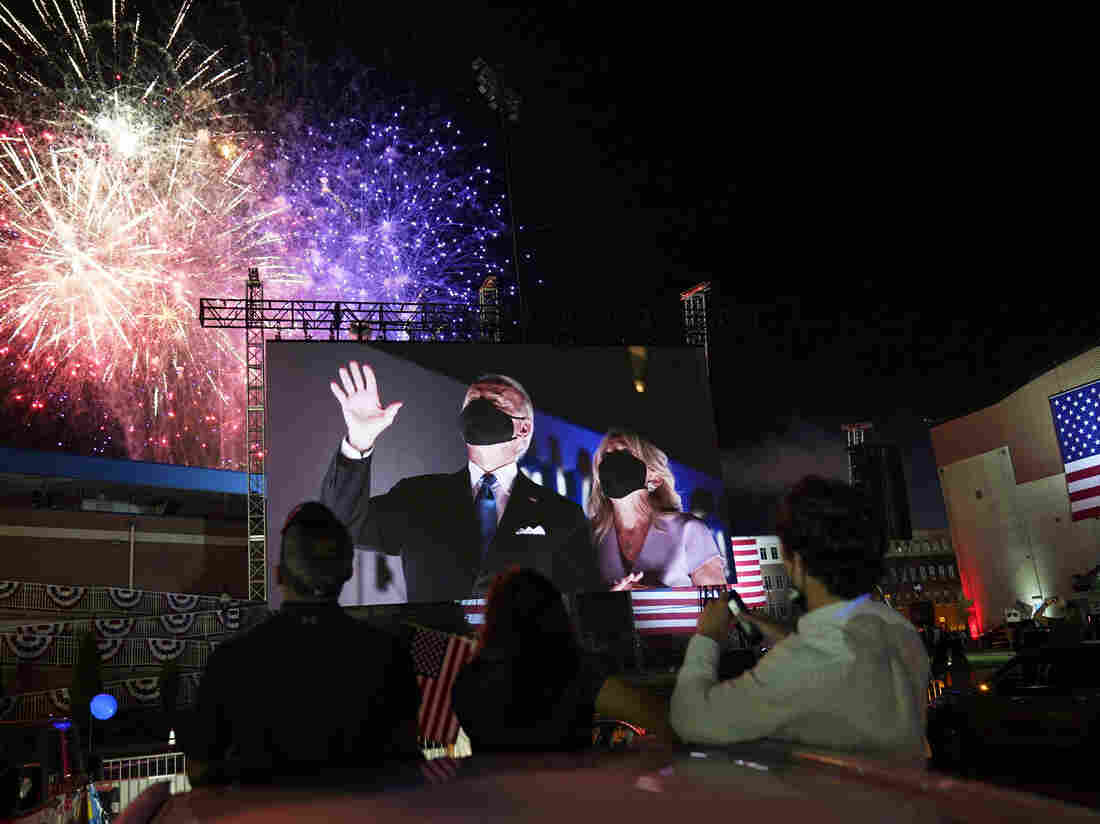 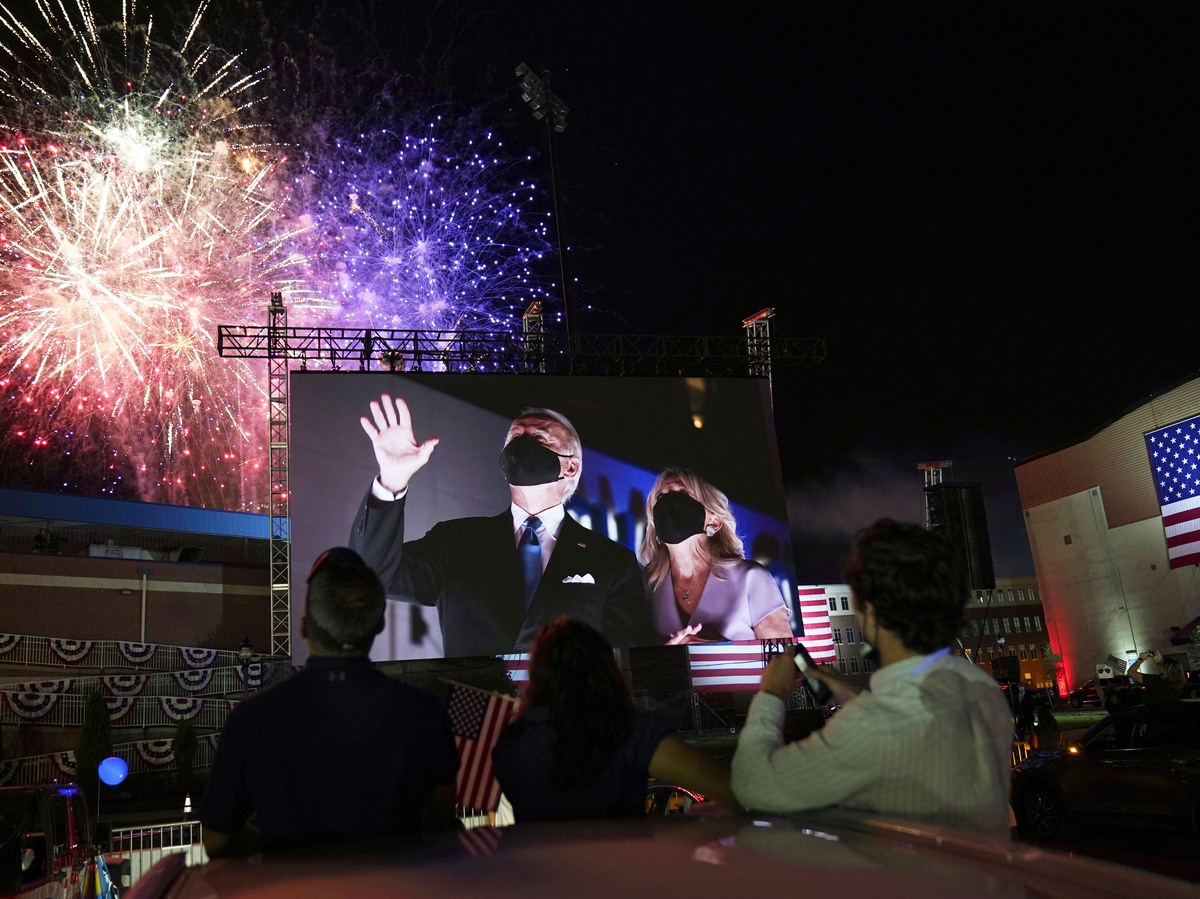 Democratic presidential candidate former Vice President Joe Biden, and his wife Jill Biden, are shown on large screens outside the Wilmington, Del., venue where Biden spoke on the final day of the Democratic National Convention.

On the final night, facing only a scattering of reporters and a camera lens, Biden kept his earnest attention on the camera, the stand-in for invisible judges tuning in from everywhere else.

His speech ended with an impassioned peroration. He quoted the Irish poet Seamus Heaney saying, "Once in a lifetime the longed-for tidal wave of justice can rise up, and hope and history rhyme."

Would it have been more stirring had tens of thousands been present, leaping to their feet and cheering? Yes. But words and message can sometimes be lost amid the animal spirit of a roaring crowd, a brass band and cascade of balloons in red, white and blue.

In this instance, the words could stand alone, and the message came through loud and clear.

And that was a last, unexpected virtue of the virtual convention.