Accessibility links
California Battalion Chief On The Challenge Of Fighting Wildfires During A Heat Wave Firefighters have been battling hundreds of blazes sparked by thousands of lightning strikes. "It wouldn't matter if we had five times more firefighters," says the battalion chief for Sonoma County.

Listen · 3:56 3:56
California Battalion Chief On The Challenge Of Fighting Wildfires During A Heat Wave 3:56 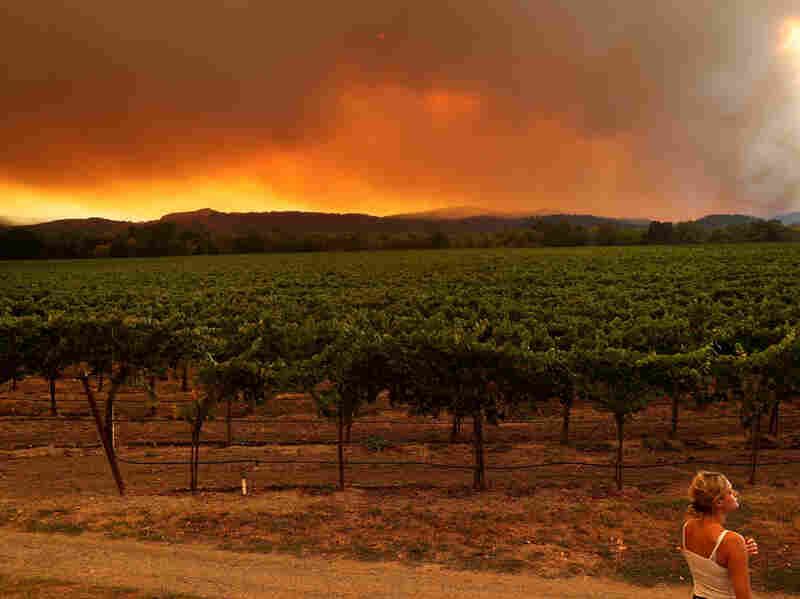 A local resident stands next to a vineyard while watching the LNU Lightning Complex fire burning in nearby hills on August 20 in Healdsburg, Calif. Justin Sullivan/Getty Images hide caption A local resident stands next to a vineyard while watching the LNU Lightning Complex fire burning in nearby hills on August 20 in Healdsburg, Calif.

California will be under a state of emergency this weekend, as more than 500 fires rage across the state.

At least five people have died, and as of Friday morning, nearly 600,000 acres were burning in the eight largest fire complexes in the state. This all comes as the state is confronting a record-breaking heat wave. In Death Valley, temperatures reached a scorching 130 degrees earlier this week.

Approximately 12,00 firefighters have been battling the blazes, according to Cal Fire. Among them is Jeff Lemelin, the Sonoma County Fire District Battalion Chief.

"It's challenging," he told NPR's Weekend Edition. "Usually you don't know that you're dehydrated until it's too late, so you've got to constantly be drinking fluids and it's hard to do the mission that we're called to do during these times that unfortunately we've been faced with in Sonoma County — in particular over the past three years. They say it's the new norm, right?"

In Sonoma County, the LNU Lightning Complex Fire has burned through more than 219,000 acres. As of Friday morning, the blaze was just 7% contained, according to Cal Fire. Four people have died in the LNU fire, four more have been injured and hundreds of structures have been destroyed or damaged.

"It's just the volume of fires and how many fires are going on at the same time throughout the state that just taxes the resources," Lemelin said.

The state has asked for the support of 375 out-of-state fire crews, but only 45 have shown up, Reuters reported. While Lemelin says the extra help is needed, there are some fires that are just too hard to fight right now.

"It's not even that is what's taxing us, it's just the volume of fires and how many fires are going on at the same time throughout the state, and some of the fire behavior that we see, it wouldn't matter if we had five times more firefighters," he said.

The state has experienced over 11,000 lightning strikes that have caused many of the fires, something Lemelin said he has "never seen before."

"It's not a tropical place," Lemelin said. "So when this lightning front came through, the dry lightning and the higher level of dry lightning, it just started a lot of small fires that once it heated up we just didn't have enough resources to take care of it all."

Governor Gavin Newsom said the lightning strikes and record temperatures are a consequence of climate change. "Climate change is real," Newsom said on Thursday night, pointing not only to the hundreds of fires raging across the state, but also to the record-breaking temperatures in Death Valley.

"If you are in denial about climate change," he said, "come to California."

Denise Guerra, Sophia Boyd and Kitty Eisele produced and edited the audio version of this story.